When E.R. Fightmaster first read the scripts for Season 3 of “Shrill,” they were delighted to see their character’s pronouns had been changed — and with very little fanfare. After a brief stint on Season 2, Fightmaster impressed their way into a substantial recurring role as Em after displaying great chemistry with Fran (Lolly Adefope). Fran is the snarky best friend and perennial roommate of Aidy Bryant’s Annie, the show’s intrepid and cheerful main character, who is based on co-creator and co-writer Lindy West. As Fran’s dreamy new love interest, Fightmaster instantly became “Shrill” family.

With nary a comment from the writers, either behind the scenes or onscreen, the character’s name had changed from Emily to Em, and everyone on the show easily transitioned to using they/them pronouns.

If only it were that easy in real life, Fightmaster mused during a recent phone interview. “It’s like the most respectful version of what actually happens,” they said. “Which is you change your pronouns and for a year, people give you shit about it, or tell you how hard it is to remember. That didn’t happen on the show, which is a dream.”

With Bryant — a universally beloved comedic force who has been the best thing about “Saturday Night Live” for years — at the helm, the “Shrill” writers’ room is a veritable grab bag of comedy’s finest and funniest. In addition to co-creator Alexandra Rushfield, writers include Solomon Georgio, Hye Yun Park, Samantha Irby, and Sudi Green. Directors include Carrie Brownstein, Anu Valia, and Andrew DeYoung. In short, they’re all people who are very good at their jobs, with nary a straight white man in sight. 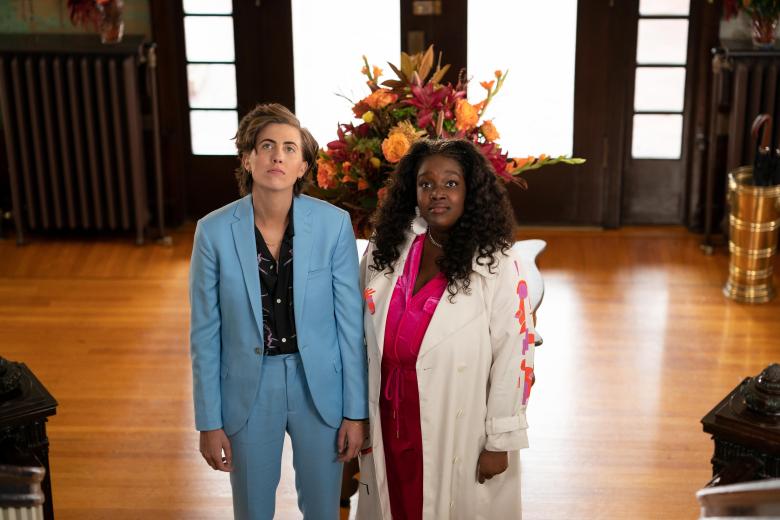 “In Season 2 they called me she/her because the [writers] did not know at the time that I was non-binary,” Fightmaster said. “And then as I got to know everyone in the cast, and got closer with Aidy and the writers, there was this kind of unspoken like, ‘We’re just going to change it for you, you don’t have to have any like painful or weird conversations.’”

The part in “Shrill” was a dream for Fightmaster, not only as a significant boon to their burgeoning career, but for getting to be so visible as a non-binary queer person. “When I was growing up, I never saw that on TV at all, or if I did see it, they were being made fun of,” they said. “Getting to be [the] butch person on TV that I always wanted to see was a real honor.”

Of course, as anyone who bucks traditional gender presentation knows, mistakes can happen in even the most accepting environments. In the chaos of a TV set, with so many people under stress interacting with new people, mis-gendering is bound to happen.

“It is an adjustment for people, especially people that are not part of the queer community. But it does feel bad on a set when someone on crew…would be like, ‘Okay, she’ll be over here.’ It took me out of myself. It takes me out of that acting moment to be mis-gendered because it feels embarrassing,” Fightmaster said. “And I don’t think a lot of other actors are having to cross their fingers and hope they don’t get embarrassed at work today.”

If that can happen on a set as inclusive as “Shrill,” which stars a gay icon like John Cameron Mitchell opposite trans alt-comedy queen Patti Harrison, it can happen anywhere. “Shrill” is set in Portland, a longtime mecca for LGBTQ weirdos and punks, and its cast is much like the city itself. It’s no surprise that a non-binary character would casually enter the fray of Annie Easton’s colorful world, but it’s still remarkable when it’s handled so casually and respectfully. It’s especially notable on a show that can sometimes feel like an old-school sitcom — just one that’s filled with a cabal of funny people to look like the world around us.

“It’s satisfying to have a show that in some ways feels like it is like following a very traditional mold, but it’s filled with queer people, and plus size women, and Black people, and Brown people,” Fightmaster said. “It’s a show you have seen so many times with an all-white cast, and our show is so much more colorful than that, and that is satisfying to me to watch.”

“Shrill” Season 3 is streaming on Hulu.