Tonight, All Rise follows in Parks and Recreation‘s footsteps, sort of.

Where Parks returned after five years for a special, all video-chat episode made to raise money for Feeding America and to generally uplift a few spirits, the freshman CBS drama is actually offering us a season finale that both fits in with the current season and offers a look into the current reality of the Los Angeles judicial system and of all of Los Angeles. We’re all staying home, and so are the characters of All Rise, though the work doesn’t stop.

And while there won’t be any mental health PSAs or performances of “5,000 Candles in the Wind” in this quarantine-made episode, there’s still something incredibly comforting about seeing fictional characters living their lives as normally as possible in the same way we’re all trying to do that right now.

There is, of course, also something surreal about seeing it, and about filming it, too.

We’ve not only got a first look at the episode, featuring an unexpected inside look at the home life of Judge Benner and a trip to the stairwell(s) for Lola and Mark, but we also hopped on the phone with Simone Missick to find out exactly what it takes to star in an episode of TV that was self-shot entirely inside each of the actors’ homes. 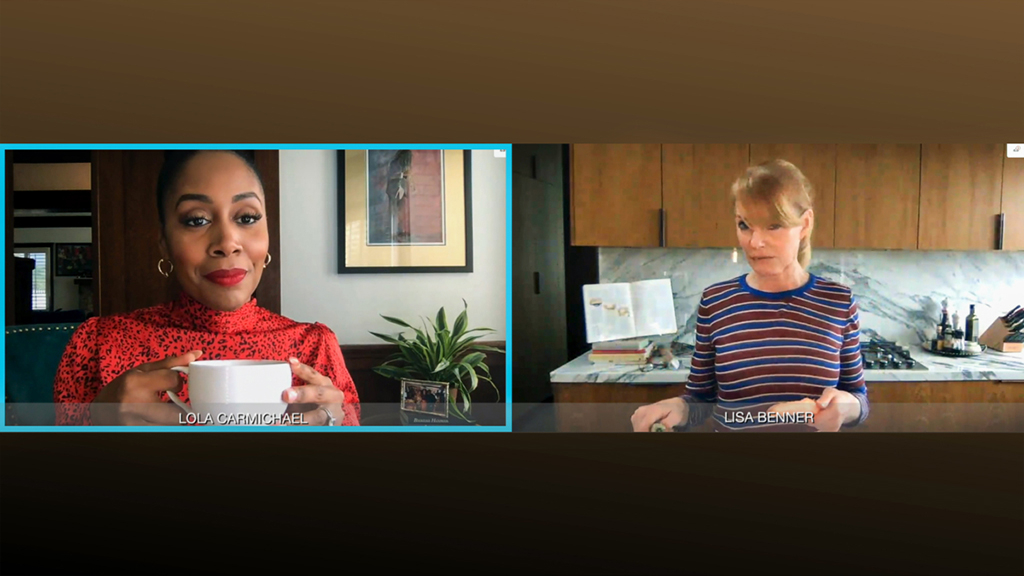 E! News: So what was your first reaction to the idea of this episode?

Missick: So the initial thought was, you know, yay! I get to go back to work! This is great and I don’t even have to leave my house! We can do it safely and not endanger anyone and still get paid to do what I love, great! And then when I was actually doing 12 different departments’ jobs from, you know, set design and location scouting to lighting and camera operating and hair and make up and crafty, I was like, oh no, this is not at all what I thought this was gonna be. It definitely made wrap at the end of the night, being able to just go ‘Alright everybody, see you tomorrow’ and go straight to bed, you know, a little easier there.

Obviously, you know there were things about it that were difficult, but at the end of the day, it was just really nice to see my cast again, to step back into Lola’s judge’s robe and her and her comfortable shoes this time around and you know, be able to give the fans a proper season finale. When the shutdown happened, no one really thought about what the rest of the season was going to look like. Beyond just our own guess. Oh, maybe we’ll add the two episodes on to the next season, you know, but at that moment, everyone was just focused on being healthy and staying safe. And so when they called us with this, we were all excited to jump at the chance to wrap out our season.

So did they ship you things? How did this work tech-wise?

Yes! So we all had our own computers and cell phones. I think that if someone didn’t, they sent them equipment, but we’re a very Mac friendly house, so I had my computer, and they also sent us lights and different cables and wifi boosters and extenders and things to make sure that the signal would stay strong while we were filming.

That technical aspect of it was probably the most precarious. You know, you have seven different actors all on the same network and filming from various parts of the country, some of us, so we just had to make sure that everyone had the strongest signal to get the scenes going, and once we got through all those kinks, it was fine.

They even sanitized props and sent them to us if we needed certain things for the scene, so they were very focused on making sure that we were all safe, and equipped to do this episode so that it would look real, so it wouldn’t just feel like oh, we’re playing around with Zoom.

To me, it feels like this is really Lola dealing with the pandemic from home, this is really Mark and this is really Sherri, this is really all of us. And it was wonderful. I particularly loved some of the characters and how we get to explore them at home. This was the first time that we explored what Judge Benner looks like at home, so to watch Marg trying to cook and completely driving herself insane…it was an ingenius infusion into the show that we hadn’t seen. And what a gift to be able to explore all of these characters going through this experience and finding humor in the middle of it.

Were you guys acting with each other via video chat?

Yes, so we were definitely all on the same network at the same time, acting in real time together, and I would say there were only two times where we had some technical difficulties. I remember once Wilson lost his connection and couldn’t get back into the chat, and we were just going to retape the scene one last time just for my coverage, and when we realized we couldn’t get him back, we thought, well, we don’t really need him, it’s just me talking, so we shot without him, but it was everybody all at the same time which is pretty cool.

At some point, some of our actors were in the same house but not filming together, so my ‘husband’ and I are filming the final scene of the show, and he’s in the gym and I’m in the meditation space. It was pretty cool that we were all able to participate in the show in this way. It’s just something that we will probably not see again in hopefully a little bit of time. 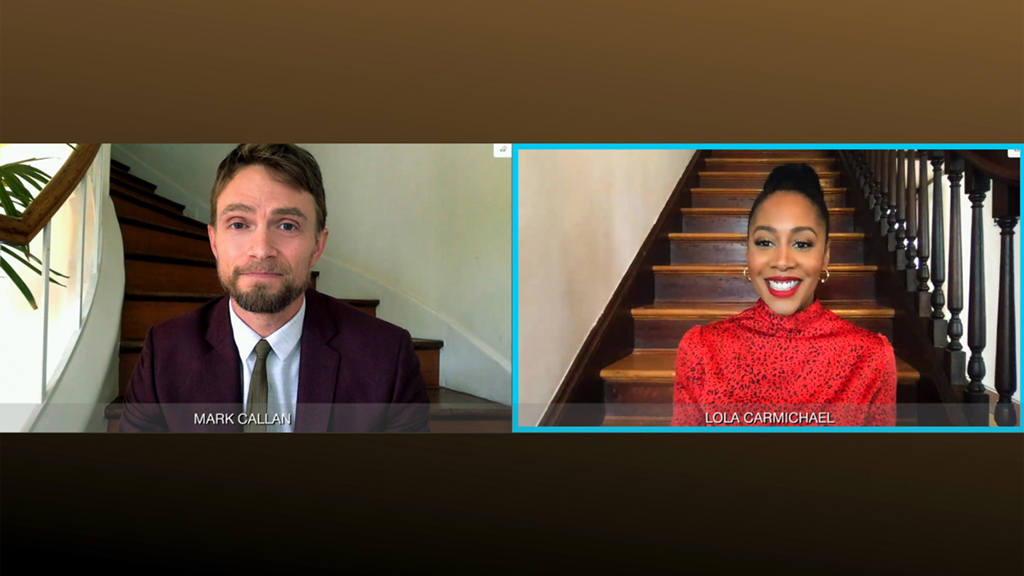 During real life video chats, it’s hard to look in the right place or to not stare at your own face. Was that an issue while you were filming?

And then they created this really cool virtual courtroom where they wanted it to feel like the courtroom, so Lola’s on one side of the bench and everyone everyone else is on the other, and halfway through maybe the first rehearsal, they’re like, Simone, why are you looking over there for Mark? That’s where Sherri is sitting, and I’m like, oh, because that’s what it is on my screen. The technology allowed for them to create the orientation of the courtroom, but the eye line is still different for me, so eventually, I had to cut out screenshots of everybody and tape them onto the computer screen, so that I would at least make sure my eye line was in the right place. So they’re doing things during the take that I can’t see, and you know, they would yell cut, and everybody’s like, oh my god, [Ruthie Anne Miles] is so hilarious, and I was like, what did she do?! 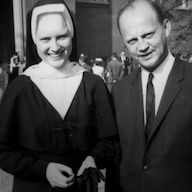 Did you feel weird about showing off your own house?

100%. I am a person who has always said I don’t want to do an interview in my home, I don’t want anyone coming to my home, even when you’re getting ready for an event and you have to do glam, they want to take before and after photos, if it’s too much at my house, I’ve often said I don’t feel comfortable shooting that. I’ve always been very private about that, so when they presented this idea, I was like, oh crap, I gotta show off my house! This is crazy!

And I remember walking around to different parts of the house during our virtual location scout, and I’m taking them from room to room, and I’m like well, this room really works, and they’re like, yeah I don’t know if I like that. So you start questioning your decorating ability, wondering why you didn’t slap paint up on that wall. But what was nice was that all of the spaces that were used do feel like they’re a part of Lola’s house, and I was able to move some furniture around to repurpose different areas. 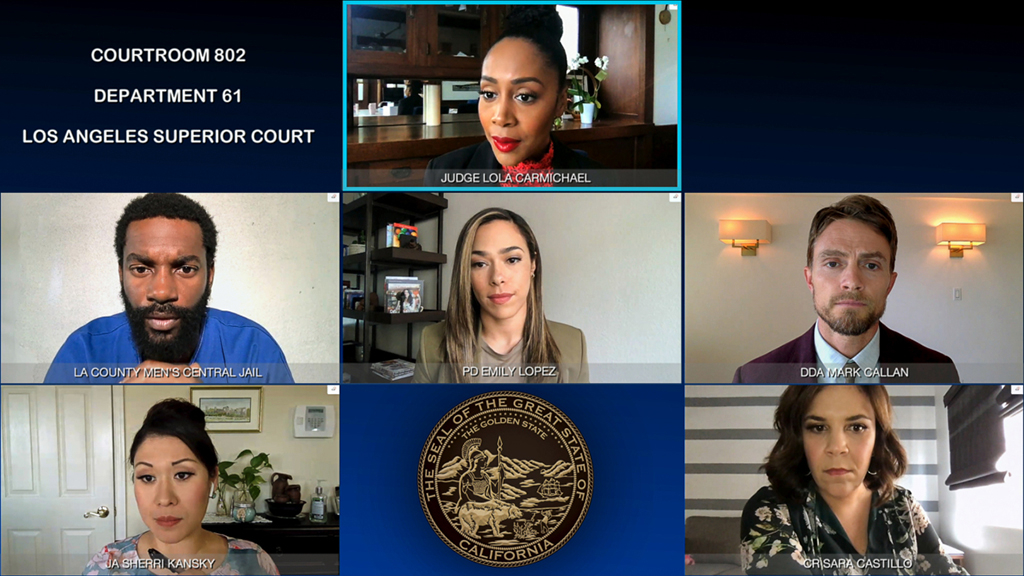 So like, my dining room serves as both my office on one side of the room and the judge’s bench on the other end, and because of the way it’s set up, you don’t know they’re in the same room. So there was definitely that hesitancy but I just kept telling myself that it’s for the fans, it’s for the fans.

How the Coronavirus Is Impacting Hollywood and Entertainment

Are the courtroom scenes true to what’s actually happening in courts right now? How much research was done?

Yes! So they are doing virtual trials and virtual proceedings. Obviously we can’t have any jury trials, so the same thing that we are dealing with in the episode is what they’re dealing with in our court systems around the world, and in Los Angeles specifically, they are eliminating bail for misdemeanors and low-level felonies in order to make sure that people aren’t being kept in jail because they’re indigent. And it’s something that people who look at social justice reform have long been advocating for it took the coronavirus to make that happen.

But that’s also something that we talk about in the episode, because the way that this virus is spreading throughout our jails and spreading to the men and women who serve in our prisons as well as the prisoners who are awaiting trial, and even ones who have been convicting. It’s just been spreading, so Gil Garcetti, who is one of our consulting producers, made sure we were up to date on what was happening in our courts and accurate.”

All Rise‘s “Dancing At Los Angeles” airs tonight at 9 p.m. on CBS.