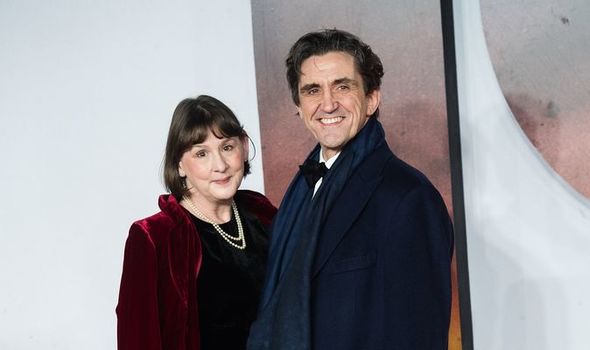 In fact, as he lovingly enthuses about his wife Heidi Thomas, the show’s writer, he sounds like a newlywed. “I cannot tell you how proud I am of Heidi,” says the star. “We have a lovely relationship and I love the bones of her – she’s wonderful.There’s no secret to a long-lasting marriage. “But if I had to think of something, I’d say it’s probably the same sort of thing as the secret to Call The Midwife – it’s just love and sincerity. That’s about both the show and my marriage to Heidi.”

Stephen, 58, has been at the heart of the TV favourite as Poplar medic Dr Patrick Turner for all 10 series.

“The show is just about love,” he adds. “It’s as simple and complicated as that. To make someone love you – like to make an audience feel moved in Call The Midwife – it’s not a clever conjurer’s trick. It’s about people seeing something in that show that they recognise in themselves. They’re crying when they watch the show because they’re crying at a better part of themselves.

“And to go back to my marriage, the thing is love. You don’t look to some masterplan. You try every day, with the deepest of friendship, regard and love.We’ve brought a child up together, [their son Dominic, 24].

“What I can say is that I’ve never loved her more than I love her now, in 31 years. We laugh more, we share more, we are more fond of each other now than we’ve ever been and it’s got better and better and better. But I can’t offer some magic formula because everybody’s different. I met this person who is so good and kind and clever and caring.

“She cares deeply and passionately about her subject, and I care about her. That’s the secret to my marriage.”

NOW, as the stars of the show get ready for their 10th Christmas Special, Liverpool-born Stephen has written a book to celebrate the show’s milestone anniversary, Call The Midwife: A Labour Of Love.

As well as sharing his own memories from his time on the drama, the book hears co present from co -stars past and present , from Helen George and Jenny Agutter to Miranda Hart and Emerald Fennell, as well as, of course, from his wife Heidi, 58.

The couple first met back in 1986 when Stephen landed a part in one of her early productions, the award-winning play Shamrocks and Crocodiles. But when Heidi wrote the first series of Call The Midwife for TV, he had to be persuaded to join the cast.At the time he had scaled back his acting work to do a masters degree.

“Back then I was on a sabbatical,” he says. “I’d decided to go back to university to do a Masters in Science Communication. I was very happy, all in the zone with that, and then one day, when I was at college in West London, I got a phone call from Heidi.

It’s a lovely part, but it doesn’t feature very much and all the actors we want to do it don’t want it because it’s too small’. I said, ‘So?’ She said, ‘Look, will you come in and read for it?’ and I said, ‘But I’m at college!’

“She said, ‘No we’ve thought of that, it’s only small, and we can work around your college. You can carry on doing your degree and keep your hand in as an actor’. And here’s the punchline: she said, ‘Anyway love, it’s only a little six-parter about nuns and midwives – no one’s ever going to watch it’. That’s what she actually said.”

And the rest, as they say, is history. Because far from being a little six-parter that no one watched, period drama Call The Midwife – initially set in the 50s and now working its way through the 60s – was an instant hit. Commissioned quick as a flash by the BBC for a second series after viewers tuned in by their millions back in 2012, it’s gone on to be watched and loved by audiences in more than 200 countries around the world. When it comes to the show’s success, Stephen – who along with older brothers Joe, 63, Paul, 62, and 60-year-old Mark, is part of one of the country’s best-known acting families – credits his wife’s ability to “place a fist in a velvet glove”.

She takes her audiences from light-hearted scenes with the nuns and midwives deep into the heart of serious subjects, using stories that families everywhere, including Stephen’s own, can relate to. “My mother lost twins,” says the star, whose mum Clare is now 86.

“The first McGann brothers were twins, and they died at birth. She had a condition which can be treated well now, but not back when they didn’t have scans. My mum was basically a Call The Midwife woman. She was a 50s girl, that’s her era, and I incidentally was delivered by a midwife on a bike, so these things are real living history to me like they are for lots of other people.”

With women’s experiences front and centre, covering hard-hitting subjects from abortion and stillbirth to the thalidomide crisis, Stephen, who lives near Cambridge, says working with such a strongly female cast and crew has been a privilege.

“It’s one of the most supportive, constructive and enjoyable sets I’ve ever worked on and I think it’s no coincidence that right from the very top of production all the way through, there are women running through Call The Midwife like a stick of rock.

“To be a man working with these women is a privilege. They’re hilarious, multi-talented, they roll their sleeves up, solve problems and get on with it, no egos flying. I was brought up by working women who had to work and were glad to work.

“My mother went off and taught herself and became a schoolteacher, so to see a programme come along and change the equation about female representation in our industry makes me incredibly proud. And the mix of people makes for a wonderful atmosphere.”

WITH his work on the programme spanning 10 seasons Stephen laughs at the experience he and other TV stars can have in tracking their ageing process on screen. “I have to say the changes in all those years make for some quite sobering viewing,” he laughs.

“But I’m fine with it. It’s part of a strange gift that comes with a show like this. We’ve all grown up together and it’s lovely to have the chance to look back on it.” With the 10th Christmas Special next month, Stephen admits that even after all this time, the nerves never quite go away.

“Right through the series we always watch the show together on a Sunday night, me and the other half,” he says. “Of course she’s seen it, but I don’t get any sort of screening before it goes out so I watch along with the audience when it goes live and I always have that feeling of, ‘Eek, I hope it’s good’.

“Then at Christmas it’s a classic. We usually watch it live with our extended family and I get these terrible butterflies. It’s Christmas dinner and then, right, we’re on. After all this time it’s still always there, that nervousness, the willingness to fulfil this duty for the viewers and the knowledge that what we’re doing is a privilege.” And with two more series already commissioned, fans can rest assured that there’s a lot more Call The Midwife magic to come.

Call The Midwife: A Labour of Love – Celebrating ten years of life, love and laughter by Stephen McGann (Weidenfeld & Nicolson, £20) is out now. For free UK P&P, Call Express Bookshop on 020 3176 3832 or visit expressbookshop.com

Harriet is brutally attacked in Emmerdale

Who is Billy McFarland and where is he now?