Gina Prince-Bythewood’s West African epic “The Woman King” begins with a combat sequence that uses action to show us both who the characters are as individuals and as a troop of elite warriors. We see how Izogie (Lashana Lynch), Amenza (Sheila Atim), and Nanisca (Viola Davis) — leaders of the Agojie, the all-female bodyguard of King Ghezo of Dahomey (John Boyega) in the early 19th century — all emphasize different movement and weapon styles and still intuitively fight together. They’re completely in sync as they carve through a village aligned with their enemy, the Oyo, which has taken Dahomey prisoners in order to sell them into slavery. The Agojie aren’t defined by impressive formations, mechanical efficiency, or physics-defying feats. They’re defined by respective prowesses that fit like puzzle pieces into the unit’s overall power;  that collective confidence is what makes every single Agojie feel like a hero.

Not that “The Woman King” doesn’t orchestrate large-scale action scenes or create involving environments its heroes need to run, chase, and fight their way through deeper into its run time, but the opening sequence does feel like a thesis statement — one that required as much group training offscreen as it does onscreen. “We trained throughout the entire movie. So if [the actors] weren’t on camera, they were in the rehearsal space still training, learning [fight choreography], and still refining their skillset with the weapons. So it took months,” Jénel Stevens, fight choreographer and stunt double for Viola Davis, told IndieWire. “No matter what weapon they were wielding, they learned the other weapons as well, just in case there was a fight scene in the movie where they had to pick up somebody else’s.”

For the fundaments of the way the Agojie move and treat their weapons, Stevens, along with stunt coordinator Daniel Hernandez and the rest of the team, leaned on Kali, a fight system that comes out of the Philippines and emphasizes a variety of both impact and edged weapons, as well as dramatic joint locks and grappling. It’s a system that allows for Izogie and Nawi (Thuso Mbedu) to bodily go at or turn their opponents sideways, even as Nanisca carves more forcefully with a machete that works almost as an extension of her indomitable will. “Where I come from in my martial arts, it starts from the ground up. If you don’t have your footwork, it’s not gonna really matter if you’re good with your upper body, because the two won’t connect,” Stevens said. 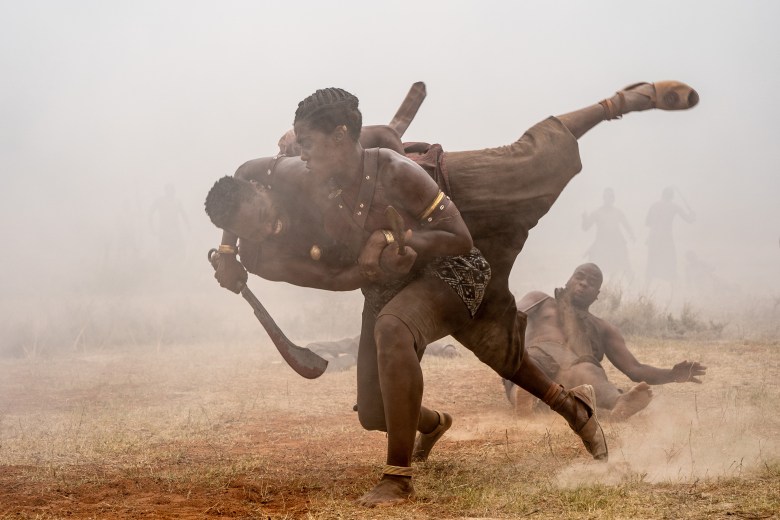 Stevens and the rest of the stunt team worked to provide the actors with versatility they could use not only with their own weapons but with the fights themselves. “We would put together small vignettes of fights, maybe like 10 beats where we could just get their minds accustomed to putting the basic strides in choreo, but not necessarily having them married to it [since] the fights were gonna change over time,” Stevens said.

Working with Davis specifically, Stevens was impressed by a thoroughness that also translated into a lot of who Nanisca is in the film, how she moves and sizes up the challenges in front of her and doesn’t have it in her to stop until the job is done. “[Davis] was really down to do any and everything, even some of the falling. And I was like, ‘You don’t have to do that. That’ll be me.’ But she went through the whole choreo piece from top to bottom and she didn’t wanna stop until it was right,” Stevens said. “I really liked the night scene with Oba (Jimmy Odukoya). That was [Nanisca’s] retaliation moment. That was her [going], ‘Okay. I know I acted in rage before, but now I’m calculated and I’m gonna kick your butt.’”

Whether or not it was her or Davis actually doing the motions, Stevens strives to embody Nanisca with an innate sense of control and power. “Getting to know her, I can weigh in a little bit more with what might feel better for her, what she might feel more confident with,” Stevens said. “So if there’s choreo already put in place, it’s like, ‘OK. How about we do this move instead of that move and it’ll still give the same results, but I think she’s more comfortable throwing a hook here than a cross, or she’d rather throw it back in than an upper cut.’ And then in terms of the weapon movements, ‘Is her forehand strike better than her backhand strike? If it’s that, let’s change how the person’s coming in from this angle.’ So [the process involves] really getting to know your actress and what they want to do and what they can do confidently, and then tweaking the choreo when it comes to that.”

All fight choreography needs to account for what the actors are capable of doing confidently, but “The Woman King” makes a special virtue out of every character having a martial identity, this irrepressible sense of how they move and fight that persists even after Izogie breaks an arm, or Nanisca takes a blade wound. The power and authority of how Nanisca moves in that final night-time showdown is as much a victory as killing Oba ends up being. “I’m proud of where all the actors got to in their martial arts training and their badassery, as I call it,” Stevens said. “There’s a lot of apprehension in the beginning, sometimes, about being able to do these moves and making it look badass and [you’re helping to give] them the confidence and the time to get to that point.”

Who are Master P's children?

'The Young and the Restless' Speculation: Are Diane and Allie in Cahoots?