Back in the day — “the day” being 14th-century France, when the loyal soldiers of King Charles VI fought the English in the Hundred Years War, and women had slightly more rights than livestock — you did not meet the slander of your good name with a strongly worded letter to the editor. There was no Twitter with which to mercilessly drag or ratio folks yet; the dream of a killer clapback was still centuries away. You settled things with a duel, which was overseen by the courts, the church, and His Royal Majesty. This trial involved lances, horses, swords, and hand-to-hand combat; whomever God smiled upon would emerge the victor, i.e. the only one left alive.

France would eventually do away with the whole officially sanctioned death-sport thingamajig, but not before one final, public spectacle between a knight and a squire took place in 1386. The former, Sir Jean de Carrouges (Matt Damon), had been super-best buds with the latter, Jacques Le Gris (Adam Driver), once upon a time. Then a dispute over land — which was to go to de Carrouges as part of a dowry after wedding a noble’s daughter, Marguerite de Thibouville (Killing Eve‘s Jodie Comer) — and some political shenanigans caused a rift in their friendship. Said beef was then further exacerbated by the claim from Marguerite that, while her husband was in Paris, she had been raped by Le Gris. He denied any wrongdoing. A woman’s very life was at stake when casting such accusations. But more importantly in the eyes of society, the honor of two men might be called into question! Clearly, they would have to beat each other senseless with blunt objects in an arena to arrive at some higher form of truth and reconciliation.

Based on Eric Jager’s 2004 book about the case, The Last Duel has the star-power part down pat: You’ve got Damon and Driver, trading blows and glares; you have Comer and a bottle-blonde Ben Affleck providing back-up wattage; and Ridley Scott, a director who’s no stranger to epic battle sequences or intimate, man-on-man quests for satisfaction, is calling the shots. This is the first time that Damon and Affleck have reunited as a screenwriting team since they nabbed Oscars for Good Will Hunting, with no less than Nicole Holofcener (Lovely and Amazing, Enough Said) also adding her prodigious chops and a needed female perspective to the script. Moreover, the movie’s aim is to revisit this curious scandal of yesteryear with the hope of tying it to our own ongoing moment of reckoning. Its goal is nothing less than being the A-list medieval #MeToo drama du jour. Unfortunately, it ends up perching so close to parody at times that you’d swear the full title was Monty Python’s The Last Duel.

There’s also a bit of a gimmick at work as well, in that we see these events play out three different times, from each party’s unique viewpoint. Damon’s de Carrouges gets the first slot, all the better to wow you senseless with the greatest Middle Ages mullet ever filmed. It’s a thing of beauty, this rampaging-warrior-in-the-front/party-in-the back ‘do, and not even the roadmap of battle scars across his face can sway you from the thought that Damon is one “Free Mustache Rides” T-shirt away from throwing down his weapons and chugging a six-pack of Lynchburg Lemonade. There is a practical reason for this particular scene-stealing mop atop his head, according to him. But you seriously begin to wonder whether the real duel here is between a himbo and his haircut, in which case we’ll declare the hair the winner and demand that it be rewarded with a Marvel movie franchise ASAP.

Right, sorry: The story, according to Jean de Carrouges, is one of a loyal subject who, having fought for king and country, feels he’s entitled to respect, status, and power. Every slight is a personal offensive of the highest order, every snub a full-frontal attack on his standing. The fact that his wife may have been assaulted by his best friend is less egregious to him than having been passed over for a captain’s position. Strip away the period armor, and he’s just another dude with an easily bruised ego and rage issues. It’s a modern interpretation of put-upon masculinity, which is how Damon plays him — and while he has always been a good actor capable of greatness, you never believe for a second you’re watching a 14th-century berserker. The casting simply feels off; there’s an odd disconnect, as if he’s acting some grad student’s thesis on the part instead of the part itself. Still, you’re treated to petulant, post-tantrum-screamed line readings of “Heaven and earth!!!” and the classic ye-olde-burn “Sycophants, all!!!” that reveals his real inspiration for de Carrouges. It’s not a medieval knight. It’s this guy. 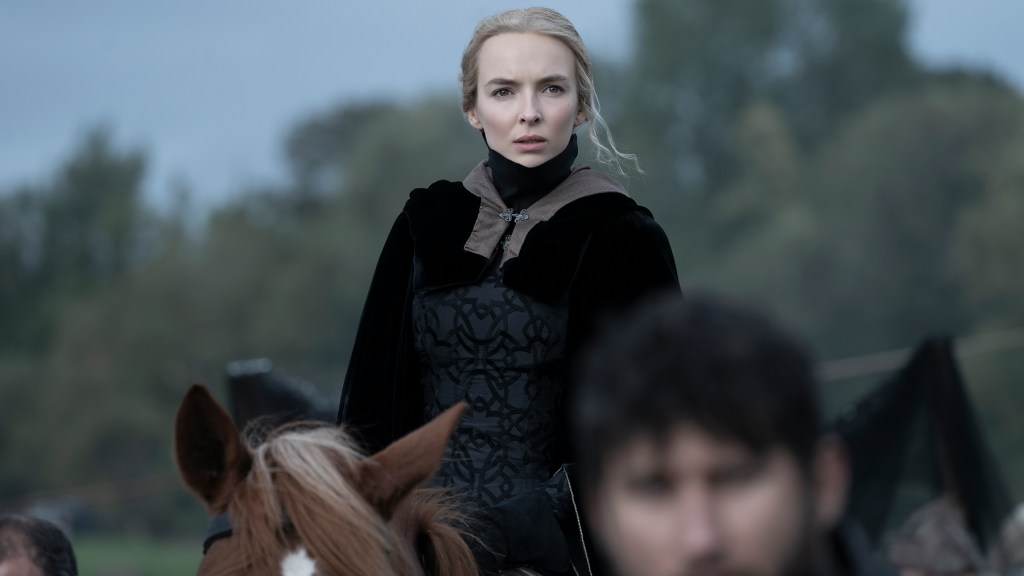 Jodie Comer in ‘The Last Duel.’

Watching that stilted first chapter, it’s hard not to think: This really needs more Paul Verhoeven energy. Then comes Round 2, and you’re reminded that you should be careful what you wish for. Now it’s Le Gris’ turn, as he relates how, thanks to currying favor with Count Pierre d’Alençon and his own abundance of charm, he’s able to ascend the social ladder. His facility with numbers and noticeable handsomeness doesn’t hurt him any, either. Upon meeting Marguerite, he believes they have bonded over their mutual love of books — how she could feel fulfilled with a brute like Sir Jean is beyond him. Thus, when he tricks his way into Marguerite’s castle at the one moment she happens to be alone, declares his love for her and forces himself on her, Le Gris believes he’s doing her a favor. Can’t she see they’re meant to be together? Later told that he’s been accused of rape, the man demurs: Well, she’s a lady, so she has to issue “a customary protest.” We all know she wanted it though, he reassures the concerned Count. You can practically feel the filmmakers nudging you to notice how familiar all of this sounds.

That’s not where the jolt come from, however. It’s the great golden-haired anachronism d’Alençon, courtesy of an off-the-leash Affleck, that gives this section a batshit shock treatment. “Come on in, take your pants off,” the Count casually says when Le Gris shows up in the middle of an orgy, and it only gets more louche and loose from there. The cousin of the King, he’s an aristocrat who loves a good time, all the time, and Affleck knows that he’s stumbled into a gold mine of bad behavior to indulge in here. Everything from reading poems to proclaiming that it’s time to drink and screw, not necessarily in that order, is given a knuckleball spin of eat-the-rich vulgarity. Affleck’s personal Pierre Le Fou is such a human chaos bolt that he essentially relegates Driver to the background of his own installment. This isn’t a performance, it’s a free-for-all field day. Asked why he dislikes de Carrouges so much, the frat-boy Count wearily replies, “He’s no fucking fun.” You can’t say the same thing about the actor with the flaxen Caesar cut, however. He is all fucking fun.

And then we get to the third part, in which Marguerite recounts her version of events, and you see how history repeats itself first as tragedy, a second time as farce, and finally as a nightmare. There’s no gray area in this account, no ambiguity or sense that this was a consensual encounter that took a dark detour. It’s an act of violence, as brutal as the climactic duel that Scott choreographs for maximum human carnage. This is the segment we’re meant to take seriously above the others — it’s also the one that lets Comer prove she could walk away with this whole production if she wanted to, and even out-act Damon’s hair if she needed to.

But thanks to the snail-trails left over from the first two chapters, and the heavy residue of camp from Chapter 2 in particular, the proceedings are tainted to a near-detrimental degree. The experience is not Rashomon Redux so much as enduring a bad rash. This survivor has been given almost no sense of autonomy and the rawest of deals, a combination handed to too many women before her and too many women after her. Though The Last Duel also gives her the last word, it still ends having stranded her in a movie that can’t get past the sum of its own uneven parts. Marguerite, and by extension Comer, can’t win here, but she at least fights it to a draw. It’s an extremely bitter victory.

'90 Day Fiancé': Olga Koshimbetova and Steven Frend Encounter Delays and Problems Before Reuniting in the U.S. On 'What Now?'