Max Greenfield has a secret he’s ready to reveal. The “New Girl” star, who’s now part of the ensemble on CBS’ freshman comedy “The Neighborhood,” filled out an anonymous Emmy ballot last year for Entertainment Weekly — and a year after “The Leftovers” had its season finale, still tried to make it his best drama pick. It wasn’t eligible, mind you, but “I love that show more than anything else,” he recently told IndieWire’s “Turn It On” podcast.

“The fact that it didn’t get nominated for [nearly] anything makes me feel like the Emmys are bullshit, just on that alone,” he said. “It was just so perfectly done.”

Greenfield said he’s attracted to shows “that I know I can’t do… This is one that I’d watch and think, ‘I don’t know how this is happening. And I’m just going to watch it as a viewer. It washed over me like a confusing, beautiful blanket.”

The actor said he would rely on his pal Mike Schur, executive producer of “The Good Place,” to help explain what was happening on “The Leftovers.” Asked to pick his favorite TV episode of all time, Greenfield chose the show’s Season 2 finale, “I Live Here Now,” for the poignant ending that wraps up the season-long journey of Kevin Garvey (Justin Theroux):

“It was the most obvious, simple, plain moment of television after the most complicated, insane, roller coaster ride that you had ever been on,” he said. “The simplicity of it is what made it so beautiful. Now I can go to bed… That whole season was perfect.”

Greenfield said he hasn’t met “The Leftovers” executive producer Damon Lindelof — even though Lindelof and Schur are pals — but if he did, he would say, “What you’ve done with this show meant so much to me as a human being. I’ve never felt more at peace after having invested so much in a season and a series ever.”

In “The Neighborhood,” Greenfield and Beth Behrs play the Johnsons, a couple who move with their kid from Michigan to Los Angeles and settle in a predominantly African-American neighborhood. Their neighbor Calvin Butler (Cedric the Entertainer) is leery of these newcomers, but his wife (Tichina Arnold) is much more welcoming. It’s a story inspired partly by the experiences of creator Jim Reynolds, who executive produces with Cedric, among others.

They talk about their previous experience working together, on the film “Hello My Name is Doris,” and their favorite episode of TV of all time. While Greenfield chose the Season 2 finale of “The Leftovers,” Behrs went back to a famous 1969 “Carol Burnett Show” sketch starring Tim Conway as a rookie dentist and Harvey Korman as his unwitting patient. Listen below.

Conway’s and Korman’s “Carol Burnett Show” dentist sketch (above) is often included on lists of TV’s all-time best moments. For Behrs, who used to watch reruns of Burnett’s sketch comedy series with her grandmother, it’s been a thrill to actually get to meet and work with the legendary comedian. Most recently, Behrs appeared on the “Carol Burnett Show 50th Anniversary Special.”

“Talk about live audience and comedy, you can’t get better than that ensemble,” Behrs said. “It’s some of the best physical comedy I’ve ever seen on television. And Carol is a genius and I’ve so looked up to her my whole life. When YouTube first came out, they put the Carol Burnett and Julie Andrews Carnegie Hall specials on YouTube and I watched those hundreds of times. She’s a class act.” 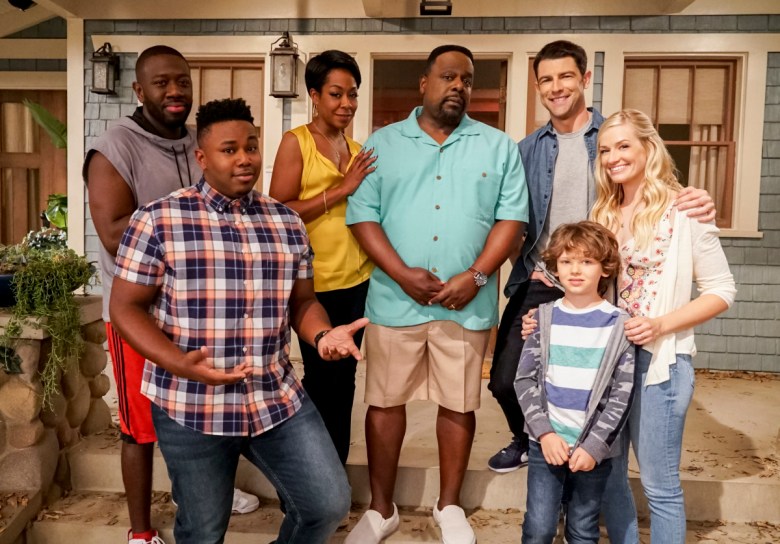 “The Neighborhood” was a quick return to the world of multi-camera comedy for Behrs, who had spent six seasons on “2 Broke Girls,” while Greenfield — best known as Schmidt on seven seasons of “New Girl,” was ready to try something different.

Neither Greenfield nor Behrs were originally cast on the show, but the duo — who previously worked together on the film “Hello My Name Is Doris” — relished the idea of working together along with a larger ensemble.

“Max was a huge draw for me coming back to multi-cam,” Behrs said. “As soon as I talked to him and watched the pilot, it was a no brainer. We had become friends over the years. It’s nice to do comedy all day every day together.”

After years of a grueling schedule filming “New Girl,” Greenfield said he welcomed the pace of doing a multi-cam comedy in front of a studio audience. “This is the best job,” he said. “And I think both of us had options after ‘New Girl’ and ‘2 Broke Girls.’ I don’t think either of us would have said ‘yes’ if we didn’t think this was the best option. 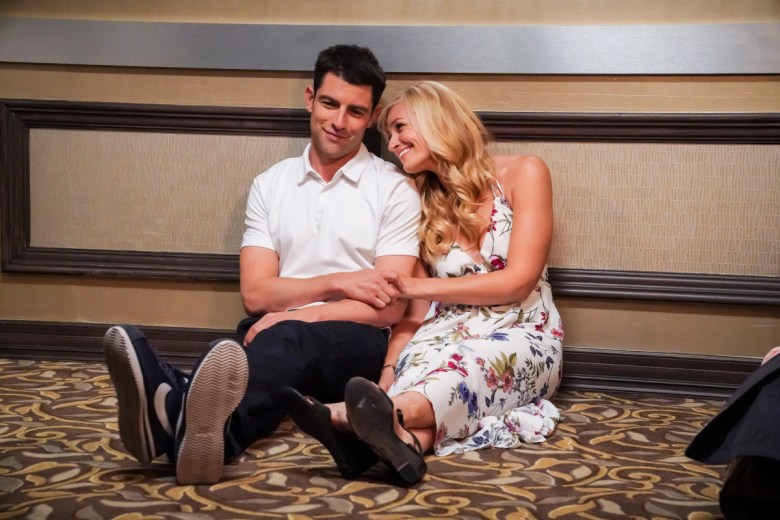 “We were in the incredible circumstance of getting to see something, getting to fill in a lot of the blanks and know a lot of the unknowns. It was a daunting task to balance out what Cedric and Tichina had created but that was the gamble. Can we elevate what’s there and can we balance these families?”

Neither performer said they were daunted by the subject matter — and actually looked forward to playing the dynamic between both neighbors, and also as couples.

Behrs said she was also attracted to the “grounded” nature of the show’s characters. “When I watched this pilot, I loved that they felt like real people, that it felt like they really existed. If we were going to tackle the issues we’re tackling in a multi-cam, this was the writing and ensemble to do it in. So I had no hesitation in terms of the pedigree being able to deliver this. Comedy is better when you set tension and then release, and Jim Reynolds, our showrunner, and Cedric do an amazing job together having the conversations and figuring it out in the writers’ room. It’s a very collaborative set.”

“The Neighborhood” airs Mondays at 10 p.m. on CBS.

IndieWire’s “TURN IT ON with Michael Schneider” is a weekly dive into what’s new and what’s now on TV — no matter what you’re watching or where you’re watching it. With an enormous amount of choices overwhelming even the most sophisticated viewer, “TURN IT ON” is a must-listen for TV fans looking to make sense of what to watch and where to watch it.

Be sure to subscribe to “TURN IT ON” on iTunes, Stitcher, Soundcloud or anywhere you download podcasts. New episodes post every week. Some music by HookSounds.

Mark Ruffalo, Don Cheadle to Appear in Marvel TV Series on Disney Plus