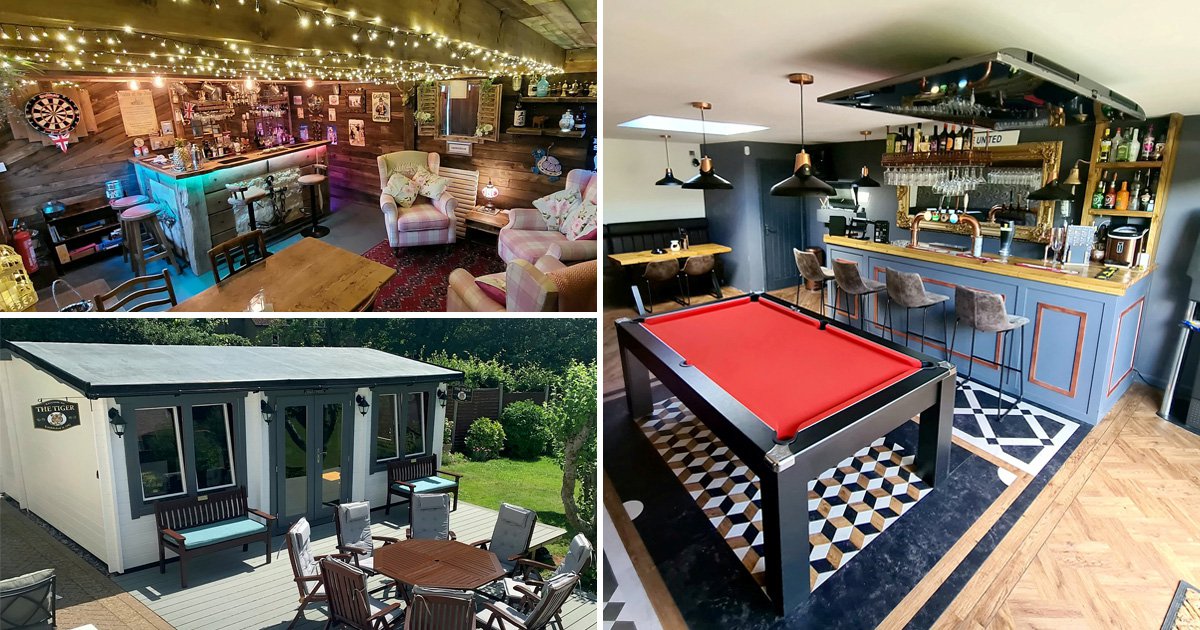 That’s right, there’s a whole other niche of shed, worthy of our attention.

And these high-end back garden boozers are battling it out to be crowned the winner of this year’s national competition, which takes place on November 12.

Three finalists have been revealed, which are:

John Simmonds, who built The Dog & Ball all on his own said: ‘I started this project over a year ago with two aims: to make the bar myself, and to make it from as much salvaged material as possible.

‘I achieved the ﬁrst part having sourced, cut, sanded and fixed every timber and ﬁtting and all 4,500 screws myself. This really is a handmade bar.

‘Doing it all from salvage was of course a challenge — thank goodness for FB marketplace, advice from the fantastic members of the GSPN UK Facebook page and a very understanding wife who I dragged around local reclaim yards sifting through old timbers,’ says John.

‘With the exception of the main roof joists, every other part of the build is made from reclaimed, re-used or recycled timber and materials.

‘Each piece has a different story, from the bar ironmongery that belonged to my late father-in-law from his days as an RAF engineer, to the main oak upright timbers which I found in a reclaim yard that were remarkably salvaged from an old demolished building I worked in some 25 years ago.’

Meanwhile, Rick Cooper, owner of The Stagger Inn, built his shed on the site of an old bar.

He explained: ‘I previously had a bar in the back garden that was getting a little old and tatty.

‘So in 2020 when the pandemic hit I decided to pull down the old Stagger Inn and give it a massive revamp.

‘I was working full time throughout the pandemic and built this on my own in the little spare time I had.

‘I really wanted a pub/nightclub-themed shed so after many hours looking for inspiration I finally got my bar finished in 2022.

‘I’m quite impressed myself, people can’t believe it’s in my garden.

‘I do enjoy sitting in there most nights and practice playing pool shots and listening to my music whilst doing some home DJing on my decks.’

And Mark Fletcher, who built The Tiger, got the inspiration to do so during lockdown.

He said: ‘Having always been an avid pub attendee, and co-owner of one for over 10 years, Iockdown was a frustrating time, particularly as I had retired in 2019.

‘My wife Tracy saw a post on Facebook of a great pub shed and thought it would be a great idea to keep me occupied.

‘It quickly became a labour of love for the next four months.

‘I ordered a slightly bespoke shed from Timber Building UK and then started to think about the interior design.

‘I wanted to create the feel of a traditional country pub.

‘The name came from the pub I co-owned in Middlesbrough, called The Tiger after the local league football team that played in orange and black stripes and had a tiger’s head as a logo — Grangetown BC.

‘The original Tiger changed its name again in 2020 so it was only ﬁtting that my garden pub became The Tiger.

‘We have had many fantastic nights and look forward to many more.’

It’s thought there could be as many as two million back garden pubs in Britain after their popularity took off over the pandemic and now the cost of living crisis.

The public vote to decide the Pub Shed of the Year top prize will be open for the public to vote on from Friday 14 October.

The vote will be open until 28 October and the winner will be announced live on the aptly named Pub Shed Radio.

As WarnerMedia Braces For Massive Layoffs, HBO Max Is Both the Cause and the Cure