A new clip showing how the terrifying accident unfolded sees host Freddie, 42, hurtling down a runway just inches off the ground on a three-wheeled cycle car. 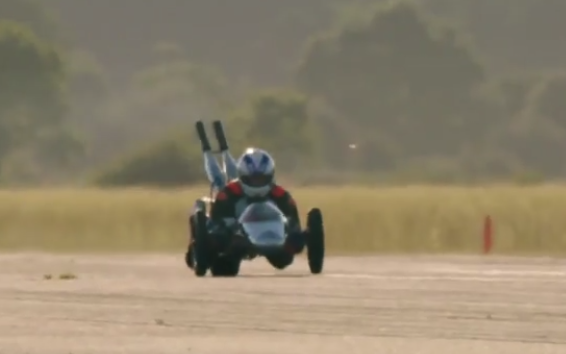 After crossing the finish line in a race against co-stars Paddy McGuinness and Chris Harris, Freddie can be heard saying: "I can't stop. I'm running out of runway."

The clip cuts just before Freddie shot onto the grass.

The accident was on the same track where former host Richard Hammond nearly died.

Onlookers at the time said there “could easily have been a similar outcome” to the crash that left Hammond critically ill with a head injury. 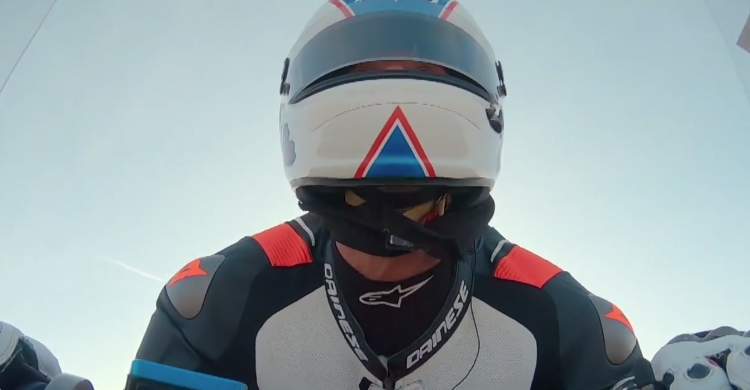 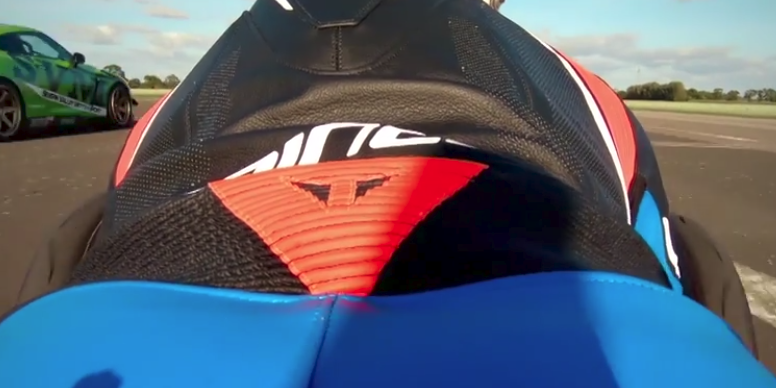 Crew and co-hosts Paddy and Chris watched in horror as he over-shot the runway in his time trial and span off in a cloud of dust.

Witness David Robinson, 57, told The Sun: “He was going flat out. Then there was an almighty bang. Dust was flying everywhere and everyone raced over.”

The hosts had been racing over a mile but sources said bosses then extended it to 1.4miles in a bid to get higher speeds. 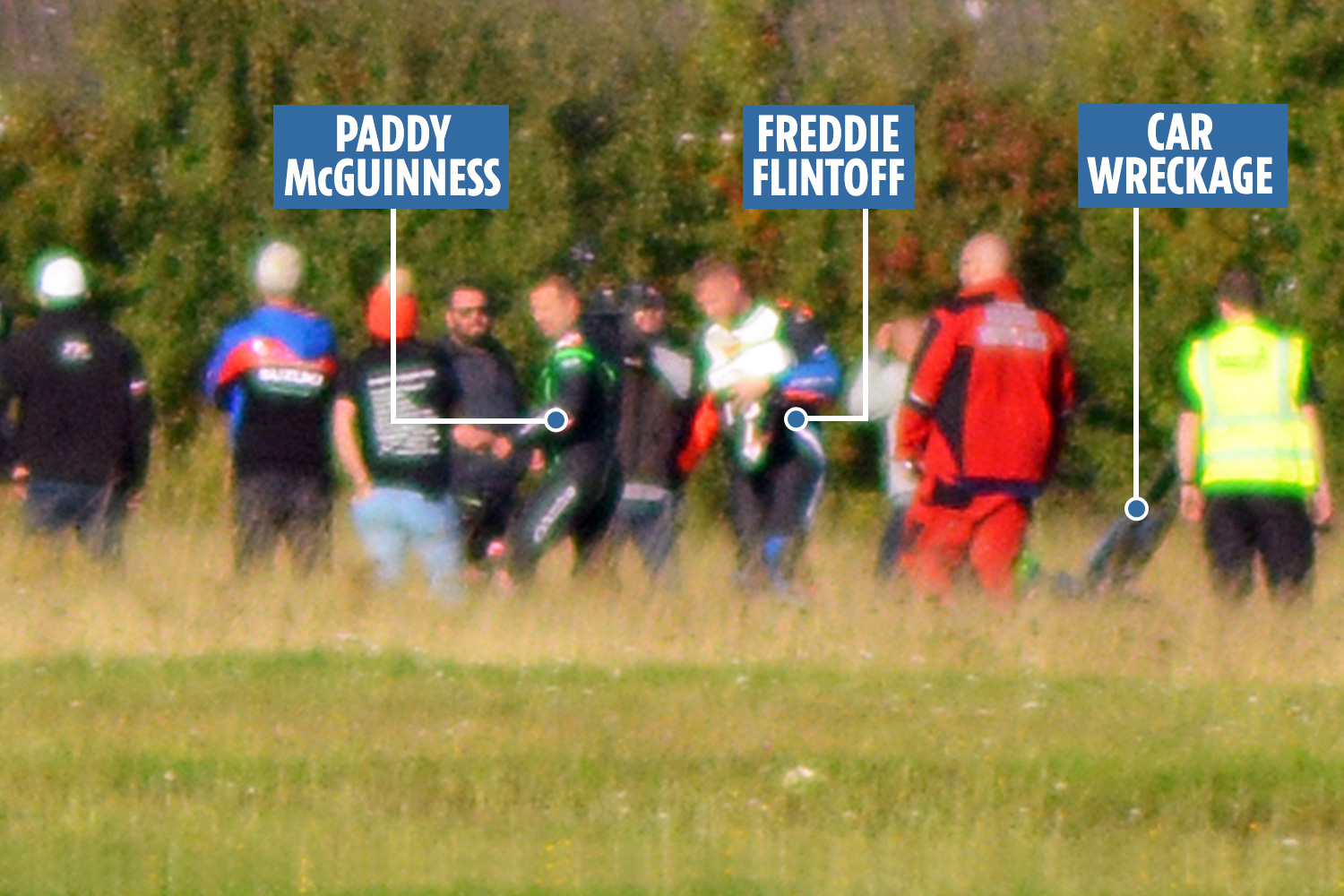 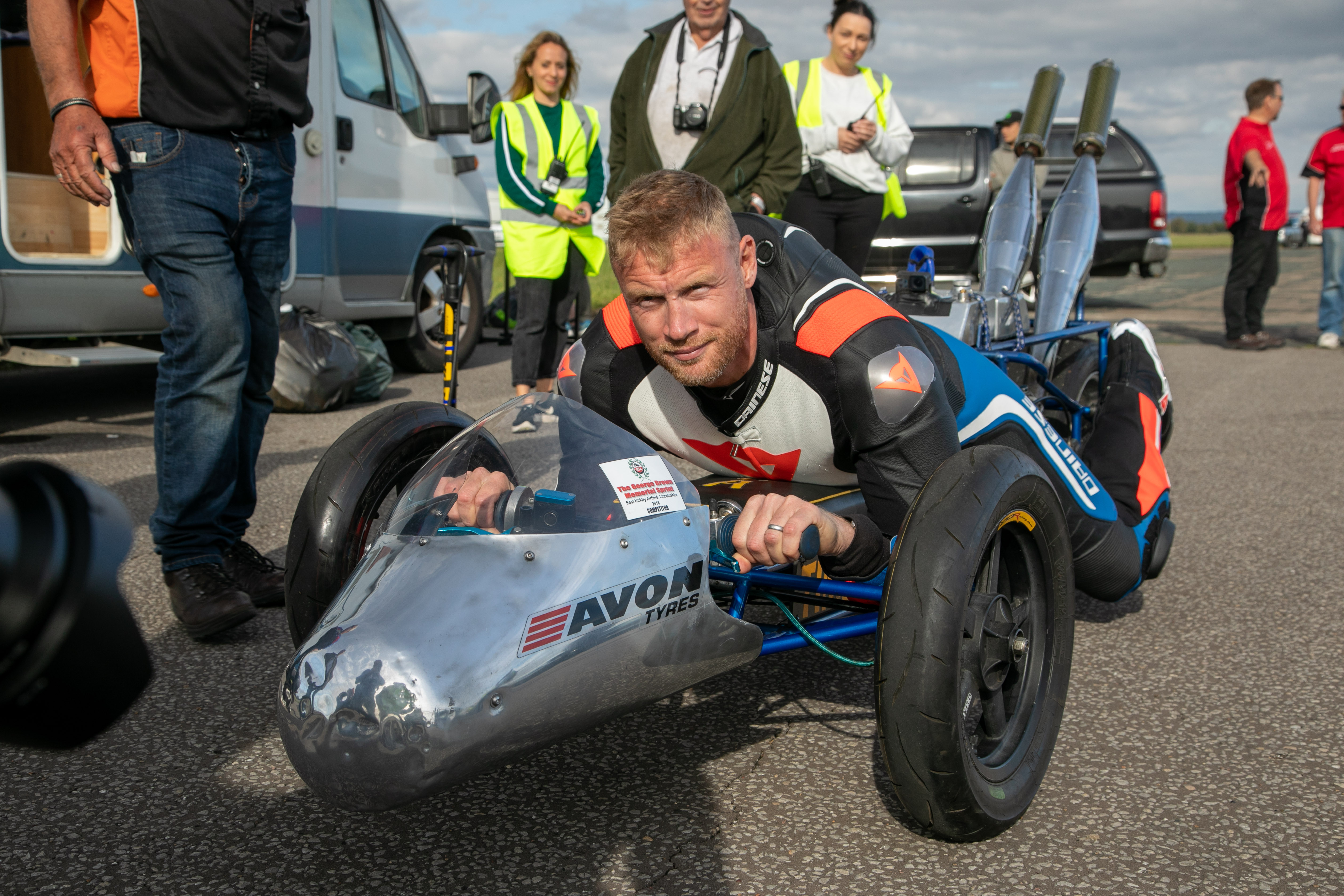 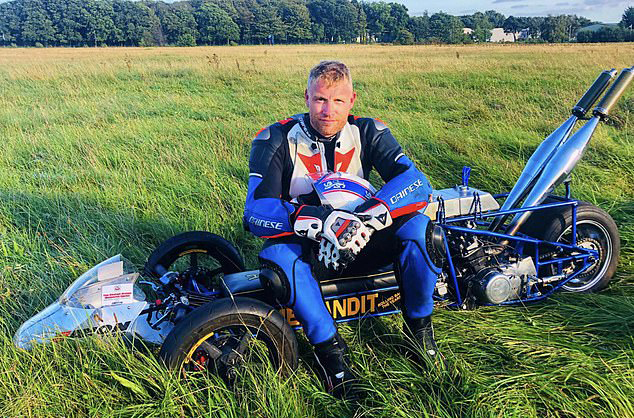 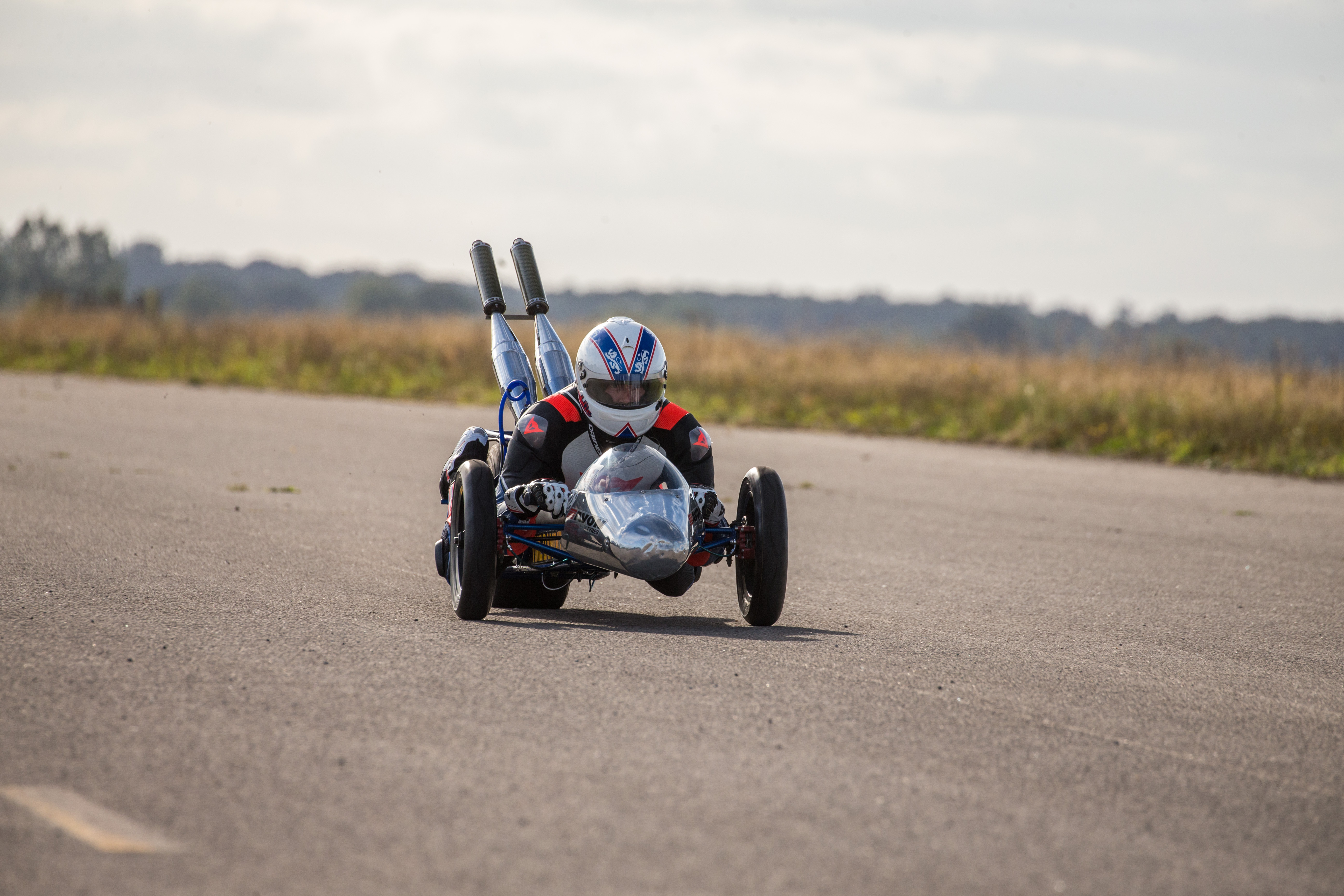 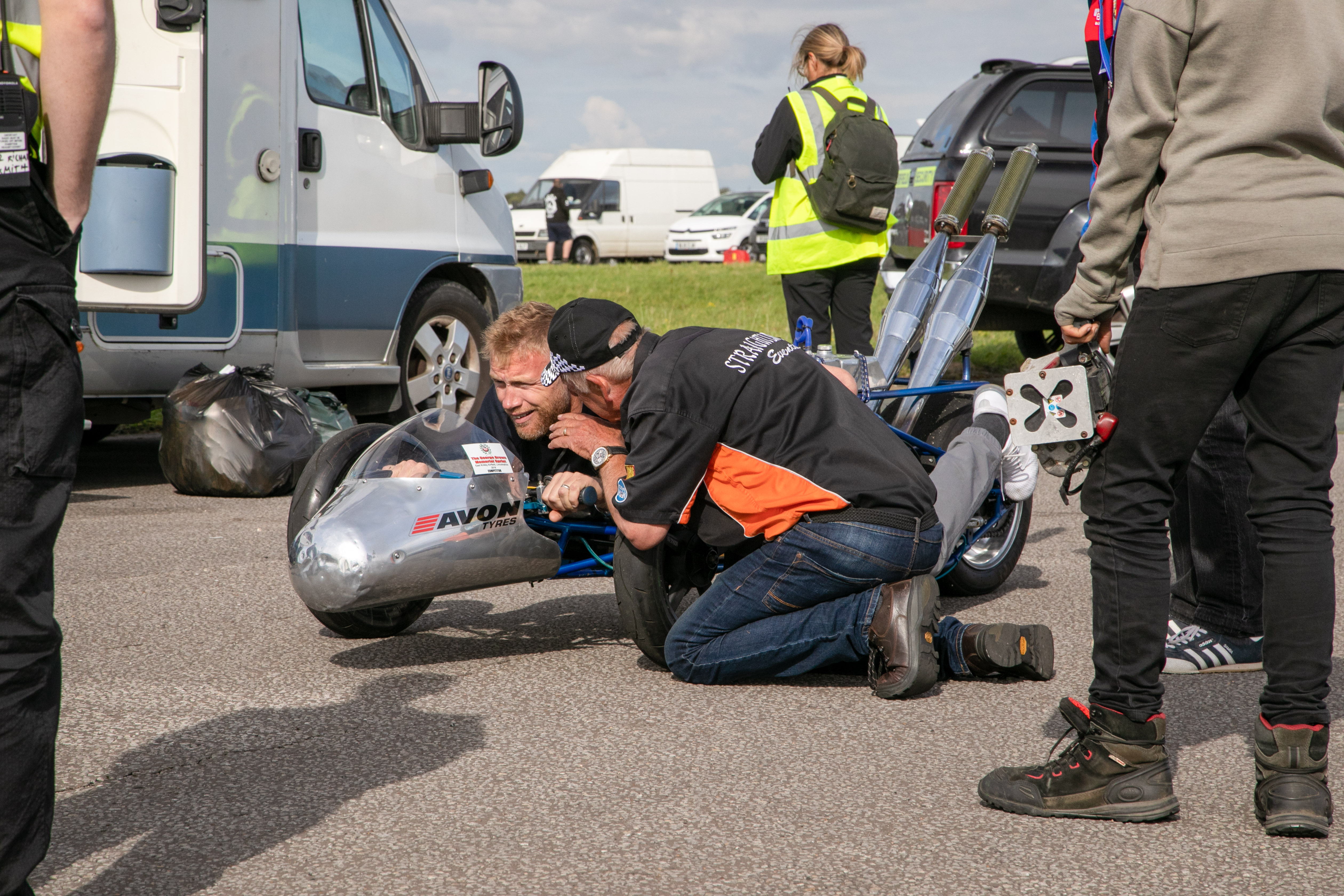 Trevor Duckworth, who owns Freddie’s Time Bandit Trike, said: “Freddie asked me how fast it would go. I said about 120mph and he hit 124mph so he was on the button.

Ex-England cricketer Freddie — real name Andrew — was helped to his feet before being checked over by on-site medics as filming continued.

David said he “could have been killed”, adding: “He was so lucky it wasn’t worse, especially after Richard Hammond’s crash. Freddie may not have been going at the same speed but it could easily have been a similar outcome.” 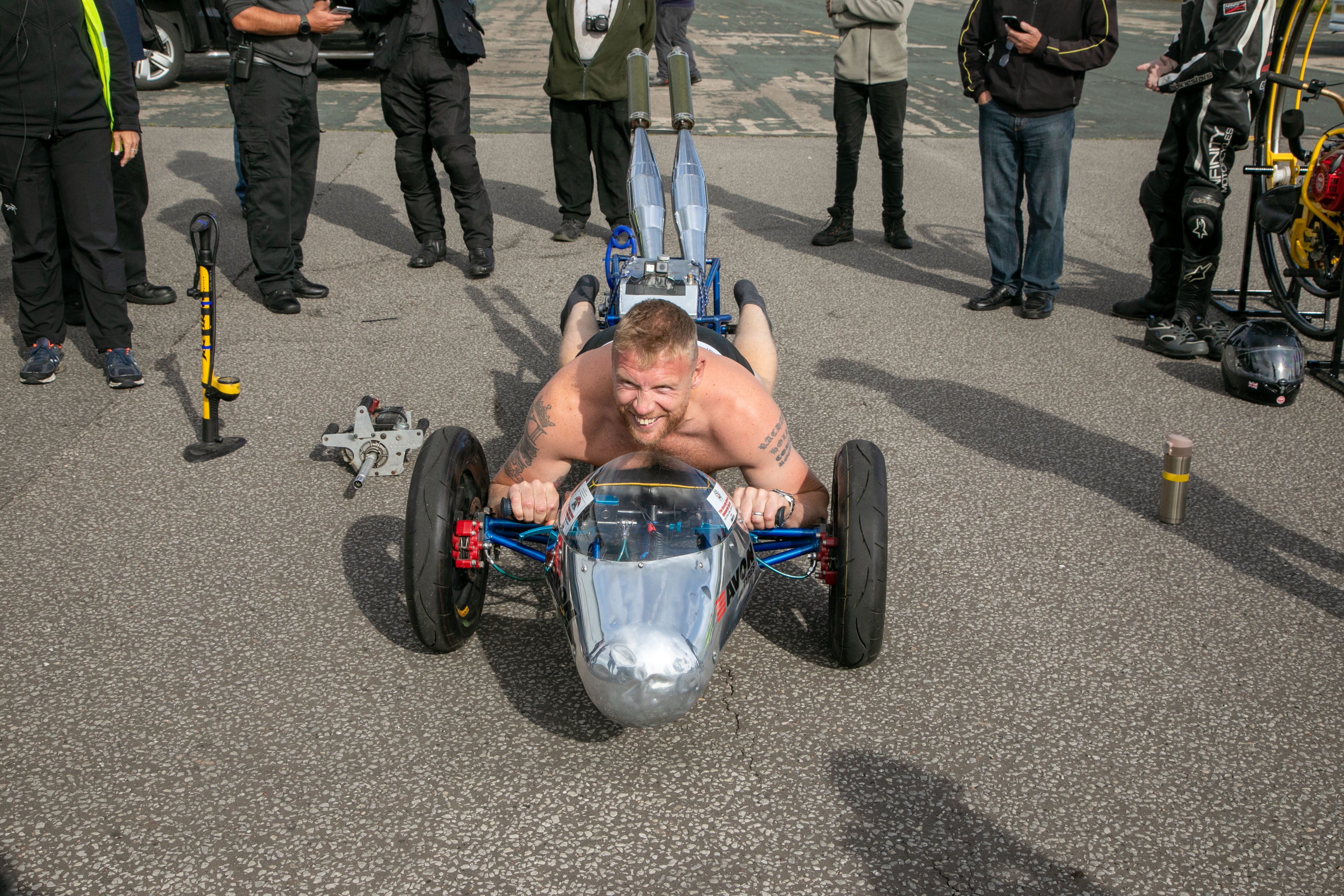 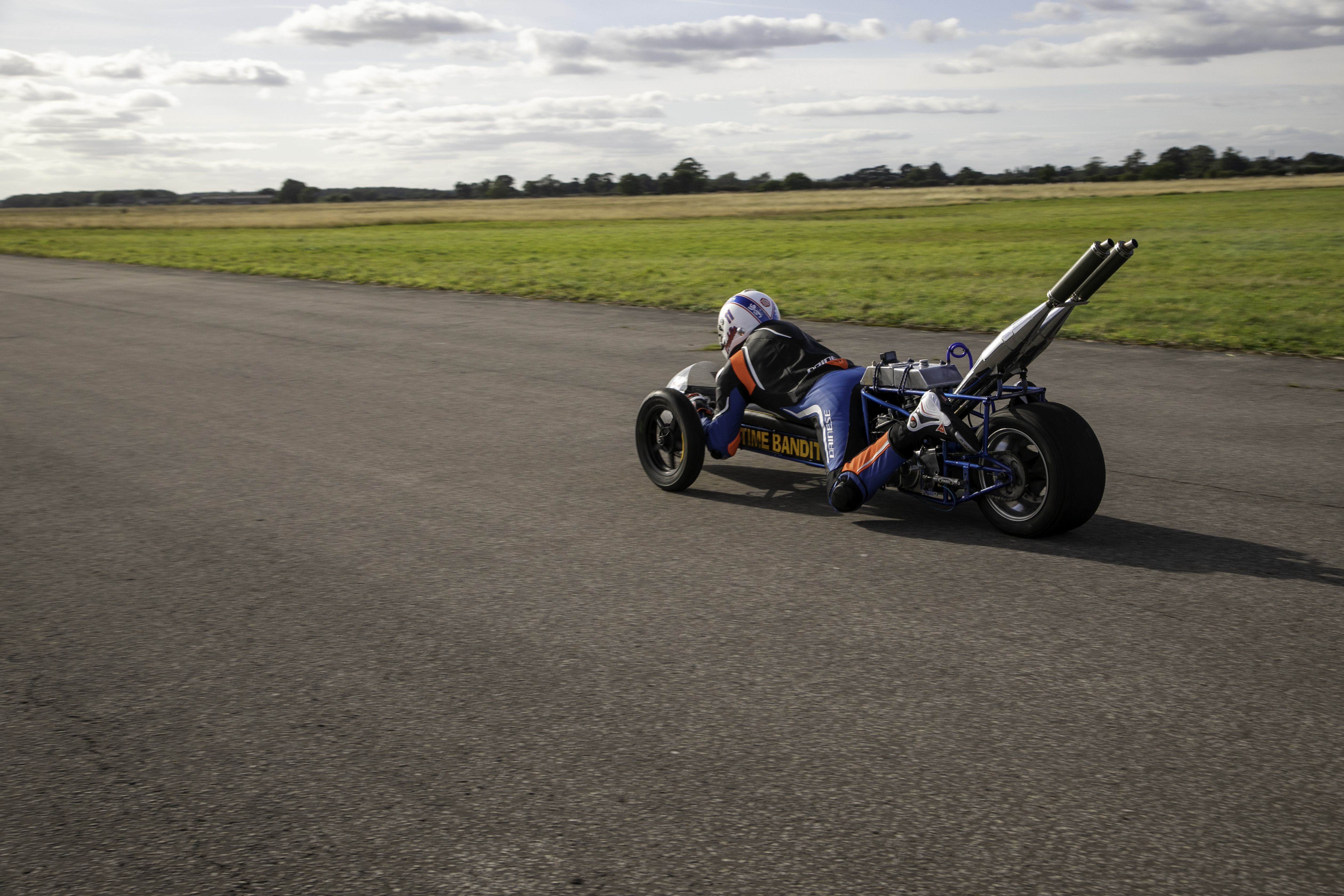 Hammond, nicknamed Hamster, was in a coma with a head injury in 2006 when his dragster span off the runway at 288mph. He made a full recovery.

Freddie said: “I’m absolutely fine and have been back filming. I go to great lengths to make sure I do well in Top Gear drag races but, on this occasion, I went a few lengths too far.

“It will look more ridiculous than dangerous when you see it on TV.”

A BBC source said checks had been carried out and Freddie was wearing bike leathers and a crash helmet. 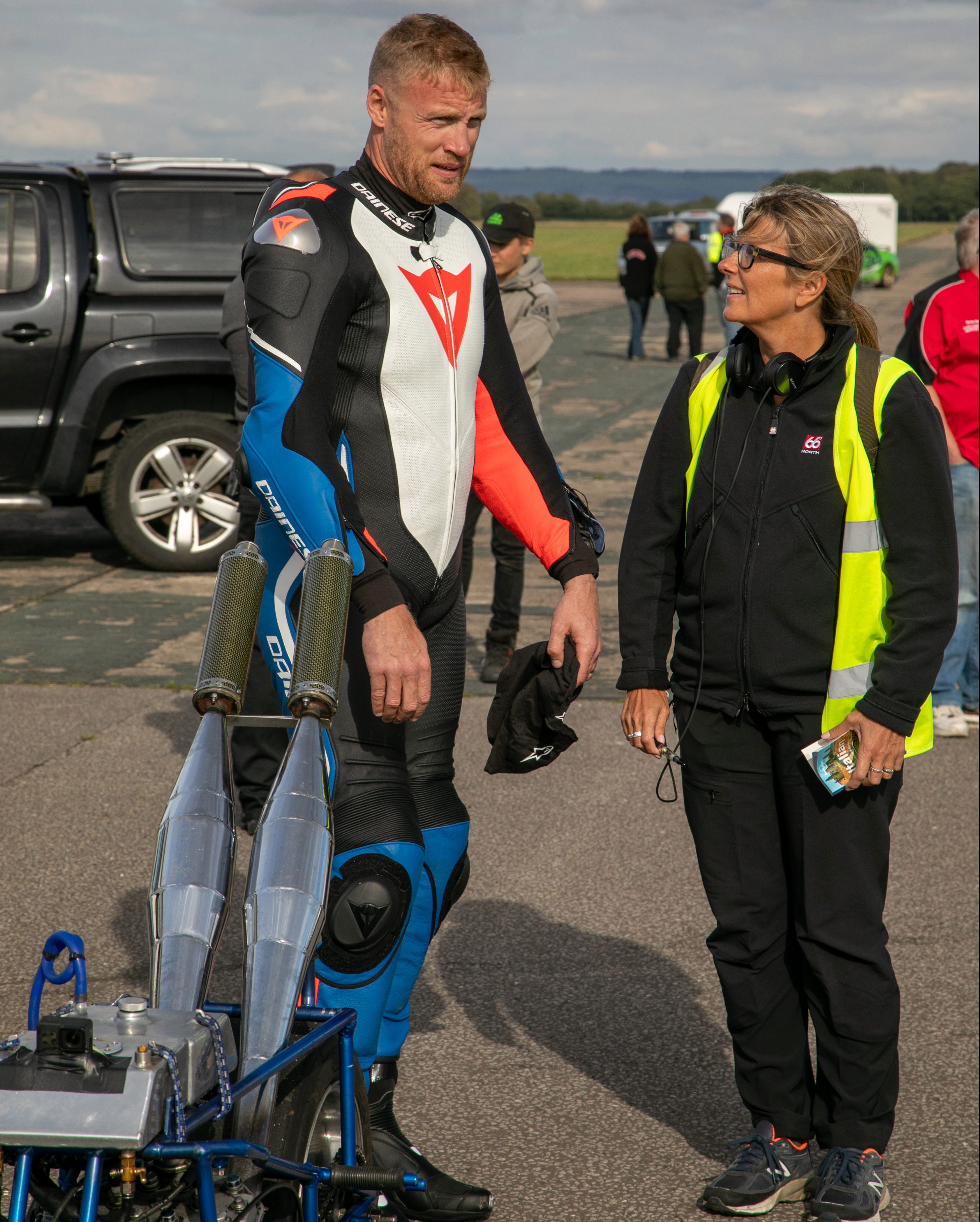 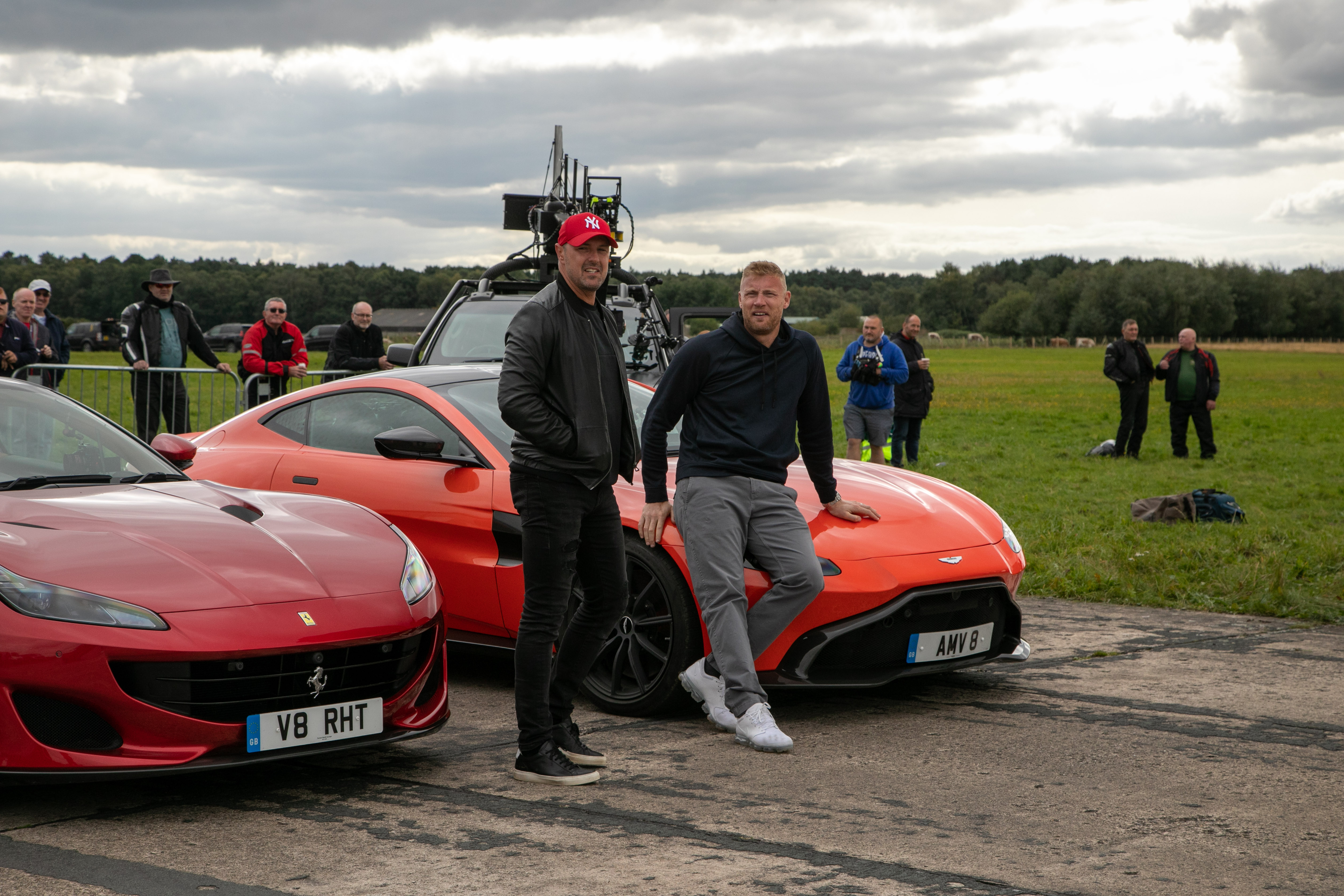 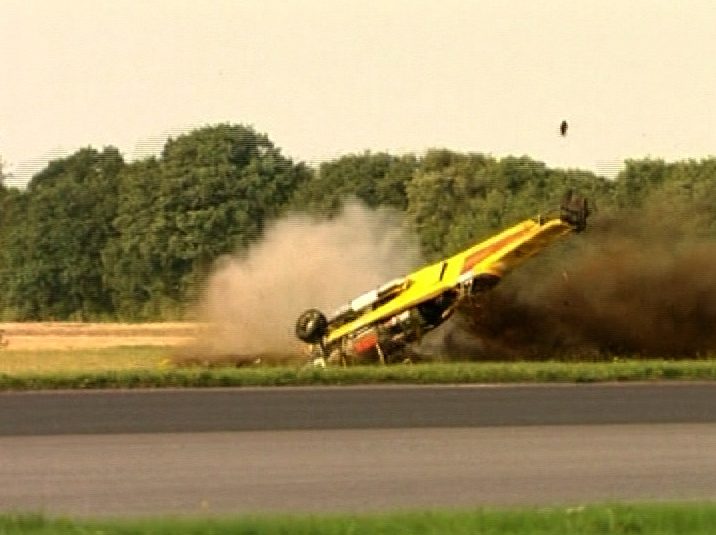 A BBC spokesman said: “The health and safety of our presenters and crew is paramount. As viewers will know, Freddie is often keen to get ‘off the beaten track’. But he suffered no injuries as a result of his spontaneous detour.”

Hammond was left in a coma for two weeks  in 2006 after crashing a jet-propelled car at the same racetrack.

Its right tyre blew as he tried to set a speed record at 288mph at the RAF base near York.

He was airlifted to hospital in Leeds and the dad-of-two later revealed he experienced depression, paranoia and memory loss due to brain damage suffered. 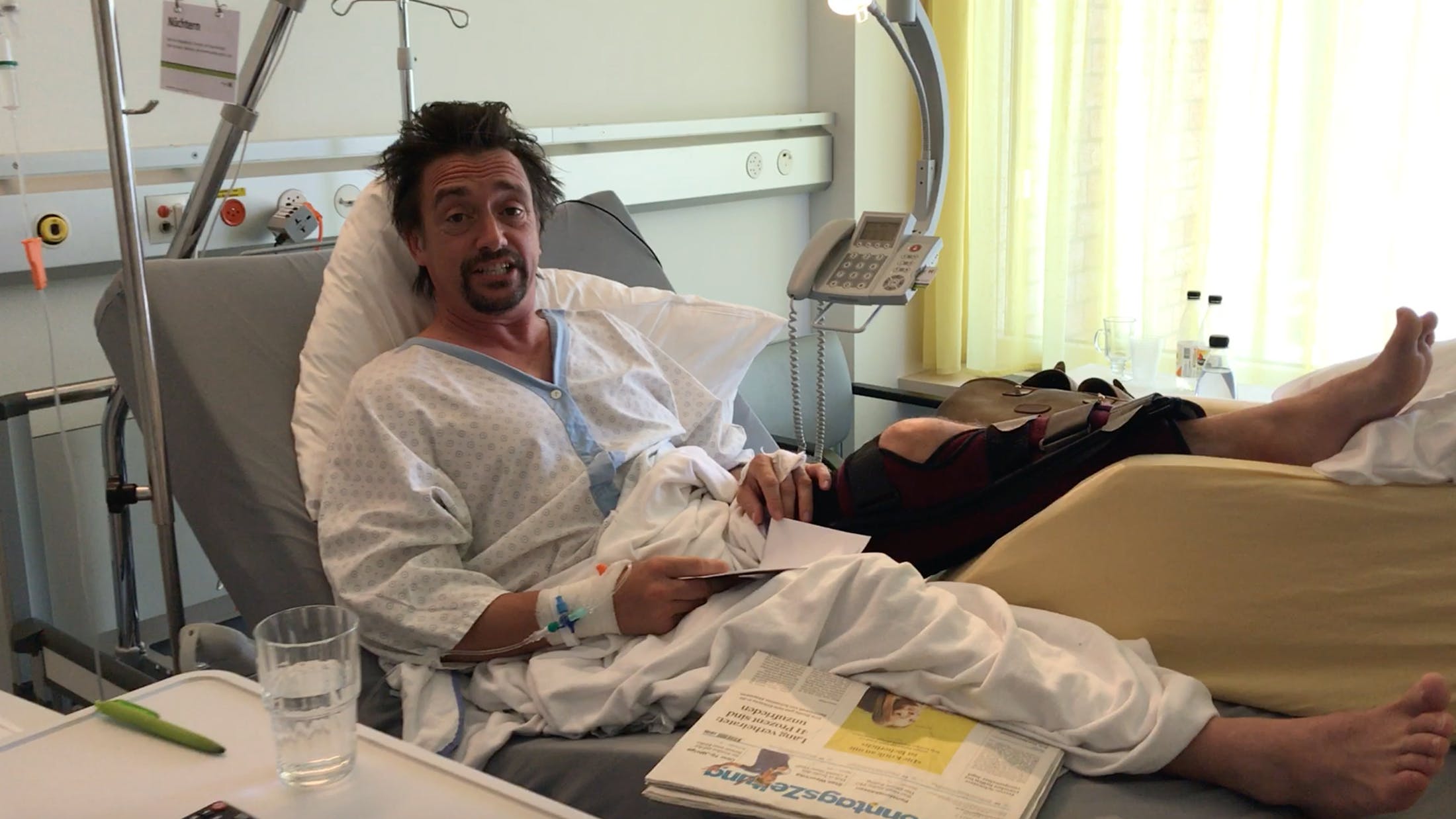