Ever since the demise of indie powerhouse Carsey-Werner, there has been no studio focused on broadcast comedy series. Surprisingly, another indie, Lionsgate Television, has found itself carrying the C-W mantle. In a tough economic environment, Lionsgate managed to go 3-for-3 with its existing broadcast series  — CBS’ Ghosts, ABC’s Home Economics and Fox’s Welcome to Flatch — all of which were renewed for next season. All of them are single-camera comedies — a genre whose financials have become partially challenging under the increasingly fragile broadcast model — and the tally, three, matches the bulk of Lionsgate’s entire previous broadcast haul of Fox’s Running Wilde, ABC’s Nashville and NBC’s Zoey’s Extraordinary Playlist.

The pickups cap an impressive streak of 16 renewals for 15 shows and no cancellations for Lionsgate series across various platforms that started in July 2021. And while Lionsgate just reported a quarterly earnings miss, the company’s TV Production unit posted a revenue growth of 75.7% to $370.2 million, with profit up 263.7% to $33.1 million compared to the prior year quarter. 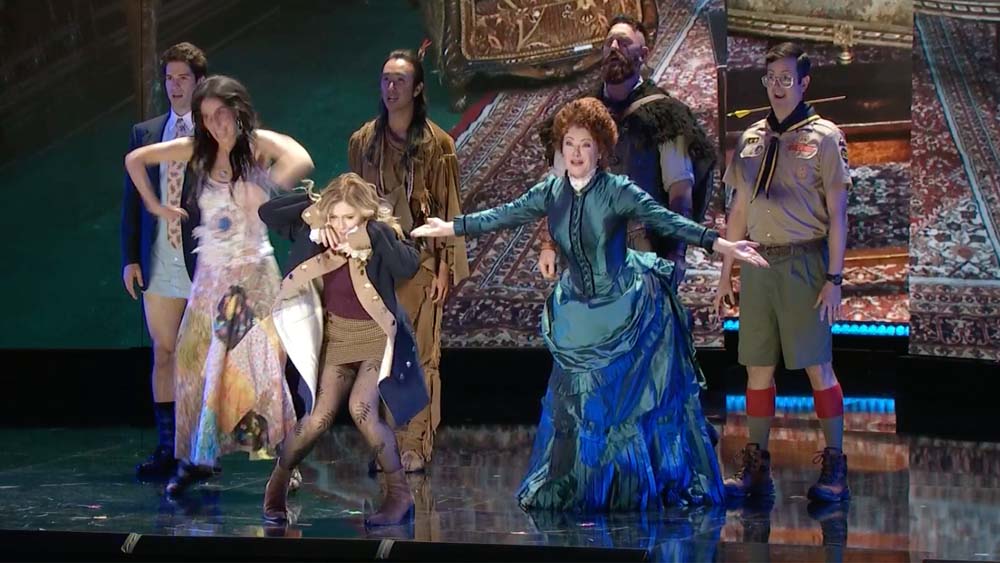 Lionsgate TV’s broadcast slate is led by one of the biggest half-hour hits on television, Ghosts, the most watched new comedy of this season and the second most watched broadcast comedy series overall. The success of the show, which kept growing throughout its freshman run, has been so big, CBS showcased it at its upfront with the cast staging an elaborate musical number. It also helped Lionsgate score a rich SVOD library deal for the show with Paramount+.

While Ghosts has been a runaway hit, earning an early renewal in February, Home Economics was moderately on the bubble while Welcome To Flatch was heavily on the fence for renewal. In addition to both of those shows earning pickups, NBC is finalizing a pilot order to a multi-camera Lionsgate TV comedy from Mike O’Malley, with Jon Cryer in talks to star, giving the studio a greenlighted comedy project at all four major broadcast networks.

The renewals came amid some of the most difficult negotiations between broadcast networks and studios over budgets that we have seen, exacerbated by the 20-25% of Covid-related additional costs, which have been hard to absorb because the broadcast model is so fixed in terms of the kind of revenues shows can generate. There has been an industry-wide push to rein in TV series budgets, which had ballooned over the past few years, with single-camera comedies among the genres where the cost-efficient production efforts have been most profound.

So how has a studio like Lionsgate, which had produced only one broadcast comedy series before the current trio, the 2010 Fox show Running Wilde starring Will Arnett and Keri Russell, become a force in the comedy genre with as many or more comedies on the fall schedule as some of the largest network-affiliated studios? And how was the studio able to achieve 100% renewal rate in one of the toughest upfront environments, especially for outside suppliers, that saw the surprise cancellations of shows like Magnum P.I. and Pivoting?

Some of it was just good ol’ hustling that small companies need to do in order to get ahead and compete with bigger rivals. No one would comment for this story but I hear it was all hands on deck, with the entire senior management of the company, from Lionsgate CEO Jon Feltheimer to Lionsgate TV Chairman Kevin Beggs and Lionsgate TV COO Sandra Stern putting their relationships to use and working the phones. In the final days before the Fox pickups, I hear there were close to 10 conversations a day on different levels with network executives inquiring about ways to secure the renewal.

For Welcome To Flatch, executive producer Paul Feig also reportedly got involved, pitching a Season 2 casting among other creative ideas. For Home Economics, there was an elaborate deck that was presented to ABC. Additionally, for Ghosts and Welcome To Flatch, which are based on British formats via Lionsgate’s BBC Studios partnership, BBC Studios’ Matt Forde also spoke with the U.S. networks to share where the original series have gone creatively, providing a road map for the adaptations.

Beyond the hustle as well as agreeing to a co-production with a network’s in-house studios and granting networks full in-season stacking rights, which have become standard these days, there is also a unique deal framework that has helped Lionsgate get its broadcast series on the air and keep them there, I hear. (In-season stacking allows networks to put all episodes from a series’ current season only on their streaming platform.)

At the core of the studio’s recent foray into broadcast TV is an approach the company adopted a couple of years ago built around the notion that a broadcast network is no longer the center of universe of media companies which also have streaming platforms in addition to TV stations and, in most cases, cable networks, I hear.

Taking that into account — and also likely factoring in the fact that Lionsgate does not own a general entertainment streaming platform (it owns Starz and its SVOD service) — I hear Lionsgate offers broadcast networks platform flexibility in exchange for a higher license fee. That allows a network, when it buys a show from Lionsgate, to put it on any linear or digital platform in the U.S. without having to ask the studio for permission (or even license it to an outside streaming platform), I hear. That includes SVOD library in the U.S. for an extended term at a reasonable price, guaranteeing the network’s parent that it won’t have to bid for the SVOD rights in the open market.

I hear Disney made such a deal with Lionsgate for Home Economics, which gives the company U.S. streaming rights to the sophomore comedy, with the two companies splitting syndication. The two existing seasons of the show are currently available on Disney streamer Hulu.

I hear CBS was offered a similar deal for Ghosts and declined it, instead opting for a traditional broadcast licensing deal (with Season 1 in-season stacking rights on Paramount+). Somewhat surprisingly — as Ghosts is an off-beat single-camera comedy with no big stars — it became a breakout hit. Likely looking to avoid a Yellowstone-style debacle, where a hugely successful series on a Paramount linear network is streaming exclusively on a non-Paramount streaming platform (Peacock), Paramount+ recently announced that it has acquired the SVOD rights to Ghosts from Lionsgate in what I hear was a competitive bidding that led to a rich deal. Those are rights the Paramount’s streamer would’ve had under the originally proposed deal, which did come with a significantly higher license fee, though the markup would’ve been still lower than the eventual SVOD market price. Paramount’s bid for Ghosts‘ SVOD rights came after the company had analyzed the show’s Season 1 streaming performance from the in-season stack.

Meanwhile, when it turned out that Fox, which I hear had taken combined multi-platform rights to Welcome To Flatch, won’t be able to monetize the series fully on its AVOD platform Tubi, I hear Lionsgate offered to take back those rights for the studio to sell the way they did on Ghosts. I hear the addendum to the original agreement reduced what Fox is paying for the show and helped make the Season 2 renewal possible despite Welcome To Flatch’s modest linear ratings performance.

While budget negotiations have been brutal this year, I hear there were no budget reductions on the renewed Lionsgate series. Talks focused instead on lowering the built-in budget increases, which the studio and the networks agreed to.

Budgets are an issue everywhere amid challenging economics of the TV business, including in premium cable and streaming, even when it’s a sister network like Lionsgate-owned Starz. That makes Lionsgate TV’s streak of 16 consecutive renewals, which include such shows as Mythic Quest, renewed by Apple TV+ for two seasons, and Julia on HBO Max, even more impressive. (You can see a full list below.)

As for broadcast, while it has become an accidental broadcast comedy powerhouse, Lionsgate is said to also be open to drama series too, and has several in development.

A24 Gets ‘Close’; ‘Elvis’ Is In The Building; Latest Reviews, Deals & Video Interviews