Home » What kind of dog is John Mulaney's dog Petunia?

JOHN Mulaney and his wife Anna don't have any children together, but they do share their dog Petunia.

Petunia has gathered her own fan base through her Instagram account and the stories John tells of her in his stand-up routines. 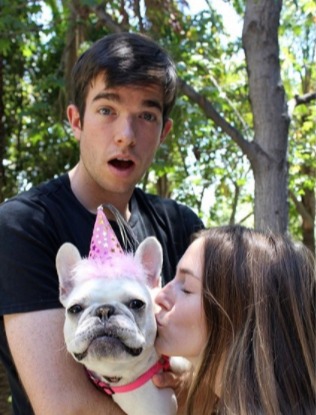 What kind of dog is John Mulaney's dog Petunia?

Petunia is a French Bulldog who according to John, is a sassy chain smokingold lady with a French accent.

She makes her way into a lot of John's stand-up comedy and has become a fan favorite.

According to John, he and Anna are not dog owners but rather Petunia is a "people owner."

The French Bulldog has her own Instagram with 161K followers.

Her Instagram account sees her modeling different costumes that she isn't always too happy about and snuggling with her owners.

What has John Mulaney said about his dog Petunia?

In his Netflix stand-up set The Comeback Kid, John recounts the time that he and his wife got a dog trainer.

“So, the trainer came into the apartment. Sorry, didn’t even walk into the apartment, walked into the threshold and went, ‘Oh, okay.’ Like she was an exorcist or something. She said, 'I see what the problem is.’ She said, ‘Petunia has become the alpha of the house.’”

John continues to explain that the couple used to feed Petunia whenever she wanted but the trainer explained that they had to assert dominance by eating their meals before the dog.

The comedian elaborated, “Because the king eats before anyone else eats. Oh, yes, and what a mighty king I will be, eating dinner at 4:45 in the afternoon.”

“So… for the past month, I sh*t you not… before my wife and I give Petunia her dish, we take down empty bowls and spoons, and in front of her, we go, ‘Mmm, dinner. Mmm, good dinner.’"

"Like we’re space aliens in a play about human beings that they wrote, but they didn’t work that hard on. ‘Mmm, we’re eating dinner.’ Meanwhile, Petunia’s just staring at us with her Paul Giamatti face, like… “You’re not eating dinner, c**ksucker. Dish, now.”

Is John Mulaney getting divorced?

According to reports, John asked for a divorce from his wife Anna three months ago.

A spokesman for the former Saturday Night Live writer confirmed the split adding, “John will not have any further comment as he continues to focus on his recovery and getting back to work.”

Anna commented on the news, “I am heartbroken that John has decided to end our marriage."

"I wish him support and success as he continues his recovery."

Fans are questioning who will get custody of Petunia.

'Wheel of Time' Gets Early Season 2 Renewal by Amazon

'Head of the Class' Reboot Gets Series Order at HBO Max