Home » What to know about HBO Max’s ‘Sex and the City’ sequel, as Sara Ramirez joins cast in nonbinary role

Cue the pop jazz theme music, designer fashion labels and the New York City cityscapes: The “Sex and the City” ladies are back – well, at least most of them.

Sarah Jessica Parker (who played Carrie Bradshaw) in January announced thenew “Sex and the City” reboot series “And Just Like That …”, in which she will star (and executive produce) with Cynthia Nixon (Miranda) and Kristin Davis (Charlotte). Parker, 55, posted a teaser video of iconic New York City locations and sounds to Instagram on Jan. 10 with the caption, “I couldn’t help but wonder … where are they now? X, SJ.”

Ramirez played orthopedic surgeon Dr. Callie Torres, who was also part of the LGBTQ community, for a decade on ABC’s long-running medical drama.

Months later, fans are still excited to know more, as details surfaced that production would begin in late spring. Here’s what we know so far:

What is the ‘Sex and the City’ reboot about?

As before, the series is based on the Candice Bushnell book “Sex and the City” and the influence of the original 1998-2004 HBO series created by Darren Star. But HBO Max chief content officer Casey Bloys told TV Line says he’s “not trying to re-do Sex and the City.” 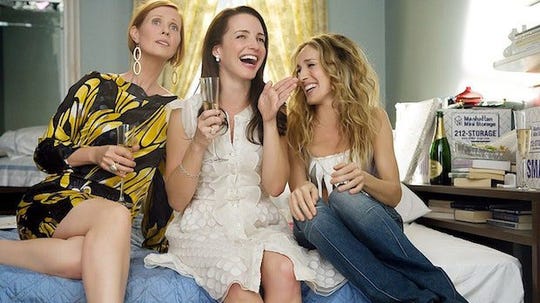 The reboot will allow fans to catch up with three of the four original 'Sex and the City' leads. (Photo: HBO)

How long will ‘And Just Like That …’ run? Where can I watch?

“And Just Like That …” will consist of 10 30-minute episodes and will stream on HBO Max. So far, the streaming service has only revealed plans for one season.

A premiere date has not been announced.

What happened to Samantha?

Fans of original serieswill notice a major character missing – Samantha Jones, who is not included in the reboot’s description.

The original girl squad consisted of four career women: Carrie, a columnist obsessed with fashion, dating and relationships; Charlotte, an art dealer obsessed with the idea of marriage; Miranda, a Type-A lawyer; and Samantha, who was a public relations professional with an emphasis on  relations. Samantha spent much of the series chasing sexual conquests and offering NSFW punchlines.

Actress Kim Cattrall played Samantha in the series and the two “Sex and the City” movies in 2008 and 2010, which received mixed reviews. But in a 2019 Mail Online interview, she vowed to “never” appear in another movie, squashing any hopes of her return to the franchise.

“Never. It’s a no from me,” the 64-year-old actress said at the time, implying her decision was rooted in her feud with former co-star Sarah Jessica Parker.

“You learn lessons in life and my lesson is to do work with good people and try and make it fun,” she added.

“Friendships fade, and new friendships start. So I think it is all very indicative of the real stages, the actual stages of life… They’re trying to tell an honest story about being a woman in her 50s in New York,” he told TV Line. “So it should all feel somewhat organic, and the friends that you have when you’re 30, you may not have when you’re 50.”

Fans commented on Parker’s Instagram post about a missing Samantha. One user @j.asminemartin explained in the comments: “they dislike each other.” Parker replied: “I’ve never said that. Never would. Samantha isnt (sic) part of this story. But she will always be part of us.” Another user, @sylviasalcedola, wrote that she “will miss Kim/Samantha.” Parker wrote back, “we will too. We loved her so.”

Cattrall’s conflict with Parker has unfolded on social media.

When Cattrall’s brother died in 2018, Parker sent condolences on Instagram. Cattrall followed up with an post that read “I don’t need your love or support at this tragic time @sarahjessicaparker.”

She added: “Your continuous reaching out is a painful reminder of how cruel you really were then and now.”

Will Mr. Big be in the reboot?

A February Page Six report said Noth would not reprise his role in the reboot despite the most installment ending with Carrie and Big being married with a black diamond wedding ring and living happily ever after in “Sex and the City 2.”

Many fans have raised their concerns of a missing Big  in the comments of his Instagram posts.

“Will really miss you in SATC, and the other characters. Mr. Big was my favorite!” one user wrote.

Another commented: “I think we’re all nostalgic for New York City and #SATC- hoping you’ll join the cast of @justlikethatmax.”

While he may not be cast for the reboot, Noth can be seen in Queen Latifah’s new  CBS remake of “The Equalizer.”

Disney+ Is Making A Mighty Ducks Show And In A Twist, The Ducks Are The Villains