Take a trip on the Titanic… the ‘epitome of security’: Rare illustrated brochure for the doomed liner as the resurfaces 111 YEARS after being produced and is set to sell at auction for £6,000

A rare holiday brochure for the Titanic has surfaced 111 years after it was originally produced.

The century old flyer, which dubbed the infamous liner as ‘the epitome of security’, has surfaced weeks before the 110th anniversary of the tragedy.

It was published a year before the 52,000 tonne linker sank in the North Atlantic Ocean, resulting in the loss of 1,522 lives, on her maiden voyage.

The brochure is being sold by a private collector who uncovered it in Northern Ireland several years ago on April 23 and is expected to sell for £6,000. 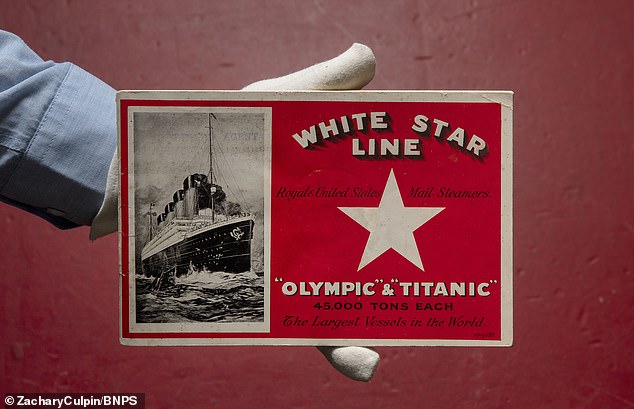 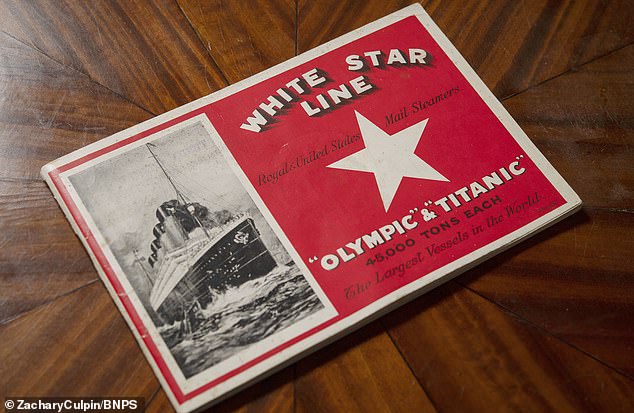 The ‘immaculate’ brochure, which includes 50 pictures, is being auctioned off on April 23

The immaculate booklet boasted the ship reached levels of ‘prestige and beauty’ never seen before and stated both Titanic and her sister ship Olympic were the perfect example of comfort, elegance and security.

Producers of the brochure – which was aimed at the more wealthy people of that generation -even compared the doomed ship to Noah’s Ark in terms of its importance and the role of the ship in man’s development.

It bright red flyer, which had a big white start for ‘white star line’, painted a picture of prestigious settings on the ship, including picturing the famous grand staircase, which feature in the 1997 blockbuster starring Leonardo DiCaprio and Kate Winslet. 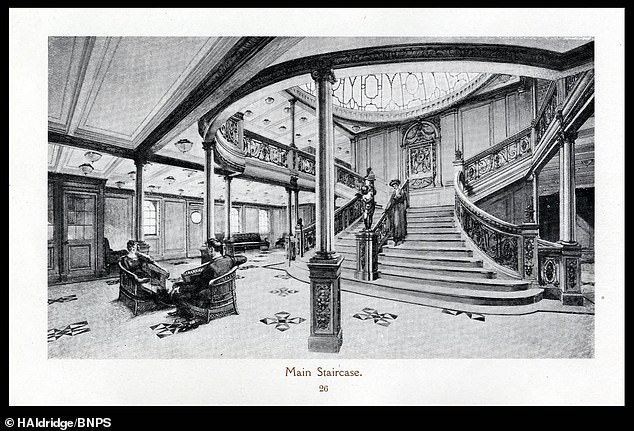 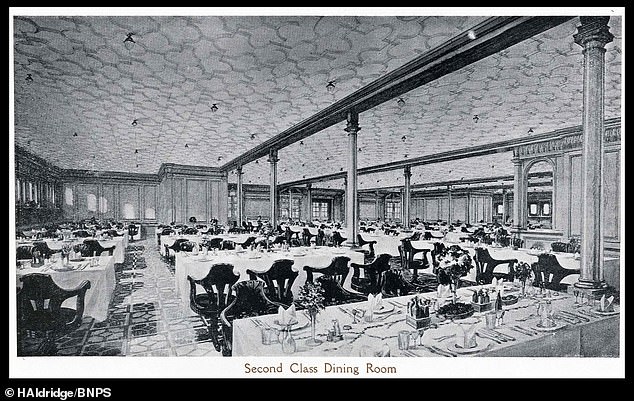 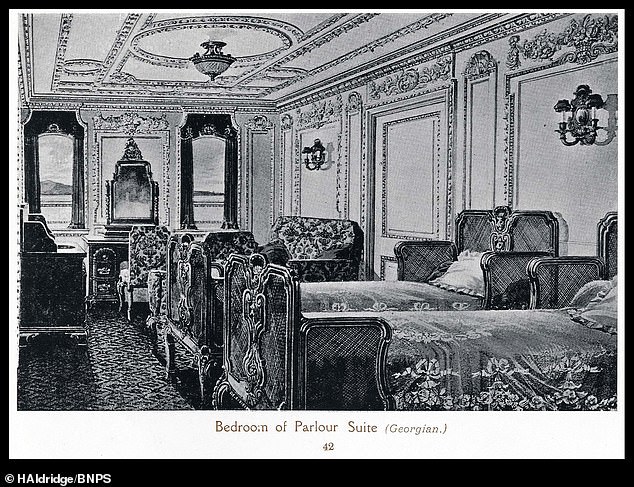 Pictured inside the 5ins by 8ins booklet are images of facilities, dining rooms and Turkish baths

It described how the lights from the handsome chandelier above it would ‘reflect upon the glittering jewels of women in brilliant evening frocks.’

The brochure went into detail about the first class accommodation on board and had around 50 pictures of facilities, including dining rooms and Turkish baths.

Only a handful of copies are in existence today, despite hundreds being printed and distributed in 1911 – making it extremely rare when one comes into the public domain.

Andrew Aldridge, of auctioneers Henry Aldridge and Son, who are auctioning the item, said: ‘There are no more than a handful of these in existence.

‘It is more of a promotional brochure that was aimed at wealthy prospective passengers.

‘The Titanic wasn’t due to set sail for another year and so the owners hadn’t formulated the prices at that time, which is why they aren’t in there.

‘The brochure was just about how this ship was the biggest and best ship on the planet at that time. 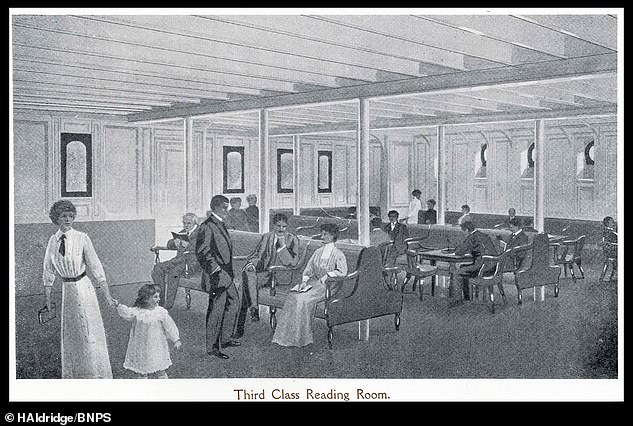 The White Star line, who produced the booklet with 50 images, claimed the boats would ‘enhance their reputation’ 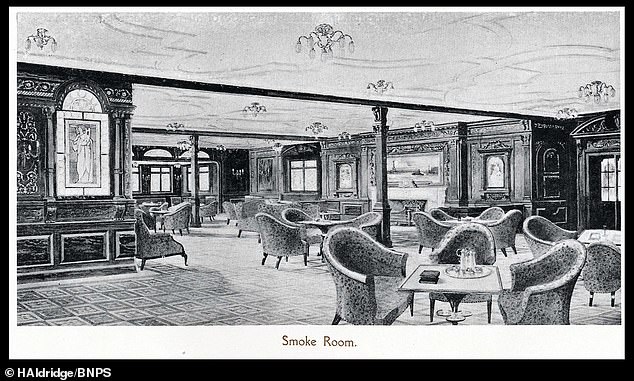 Most brochures at the time ran between 16 or 32 pages, while this one had 72 mainly illustrated pages

‘Other brochures at the time ran to 16 or 32 pages but this one was by far the largest with 72 pages. It was profusely illustrated.’

The 5ins by 8ins brochures were printed by owners White Star Line in May 1911 to coincide with the Titanic’s launch from the Harland and Wolff shipyard in Belfast – where The Olympic was launched 18 months before – and claimed the two vessels were the ‘most important maritime development of the time’ and were ‘without a peer in the ocean’.

It read:  ‘Everything on board has been brilliantly conceived and admirably carried out… 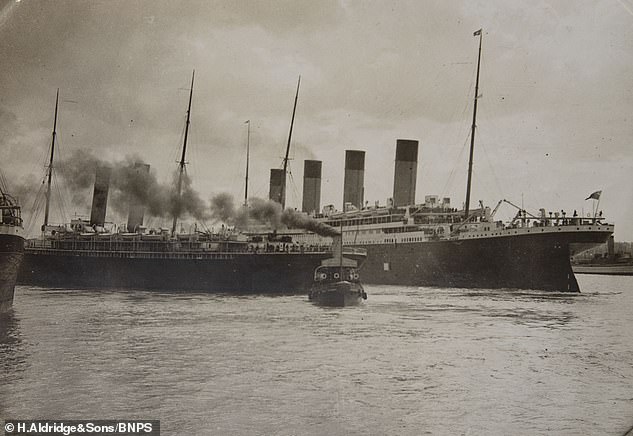 1,522 people died after the Titanic hit an iceberg in the North Atlantic Ocean and sank

In reference to the staircase, it read: ‘A great dome of iron and glass throws a flood of light down the stairway, and on the landing beneath a great carved panel gives its note of richness to the otherwise plain and massive construction of the wall.

‘Saloon passengers will foregather for that important moment upon an ocean-going ship – l’heure ou l’on dine – to regale each other with their day’s experiences in the racquet court, the gymnasium, the card-room or the Turkish bath.

‘It is safe to predict that the Olympic and Titanic will enhance the great reputation of the (White Star) Line.’

But on the contrary, the White Star Line’s reputation was destroyed after the sinking and many passengers and crew died.

Had the disaster happened today the company would have been charged with corporate manslaughter, given that the ship was speeding through an ice-field at the time it sunk.

The brochure was printed by Liverpool Printing and Stationery Co Ltd.

UK's weather set to be WORSE next year after freak 2018 with ice blasts colder than the North Pole, deadly 35 degree heatwaves and killer storms