1,500 graves appear at mass burial site near Ukrainian city of Mariupol as officials now warn 25,000 civilians may have died in Russian siege

Hundreds of freshly-dug graves have appeared at a mass burial site near the Ukrainian city of Mariupol as the death toll from Russia’s siege continues to grow.

Some 1,500 new pits appeared in satellite images taken of Staryi Krym, around five miles from the centre of Mariupol, between late June and mid-October.

Kyiv now believes at least 25,000 civilians died in the months-long Russian siege of Mariupol – during which people were forced to drink water from radiators to survive.

The satellite images were collected by technology company Maxar and anaslysed by experts on behalf of the BBC’s Panorama team ahead of the release of a new film – Mariupol: The People’s Story – which airs on BBC One at 9pm tonight. 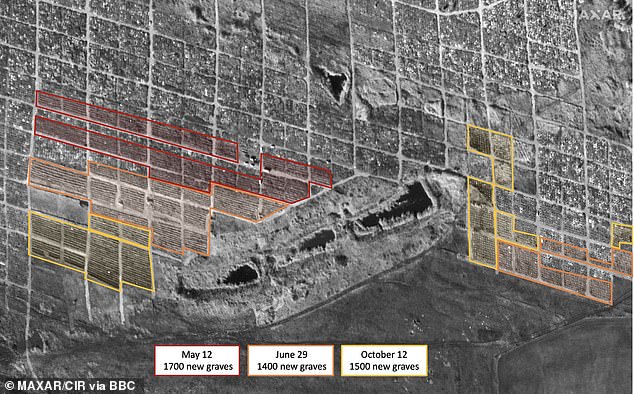 1,500 new graves have appeared at a mass burial site north of the Ukrainian city of Mariupol (in yellow), which come on top of 1,700 which appeared between Russia’s invasion and May 12 (in red) and 1,400 that were dug between May and June 29 (in orange) 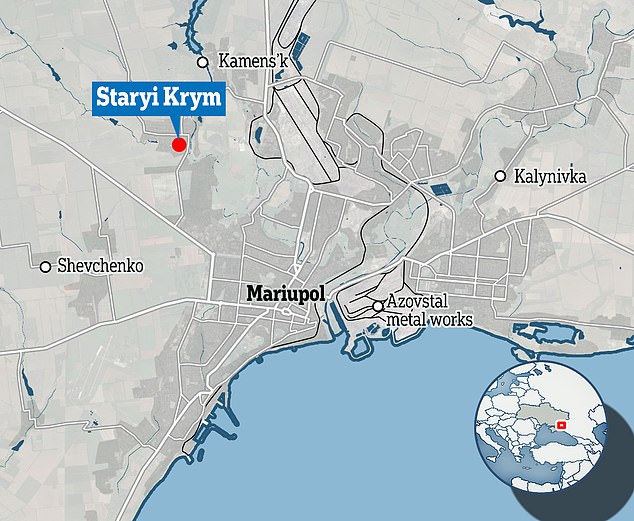 The mass burial site is located in Staryi Krym, around five miles from the centre of Mariupol which has been occupied by Russia since mid-May

Mariupol, a strategic city that sits on the road from Russian border regions to occupied Crimea, was among the earliest targets of Putin’s invasion.

It was bombed and shelled from the first day of the attack, and was completely surrounded by Kremlin forces in early March.

Russia artillery units then systematically levelled city blocks in an attempt to capture it from Ukraine, which culminated in a standoff at the Azovstal steel works.

Ukrainian troops held the manufacturing plant for weeks, but eventually surrendered in May after running out of food, ammunition and medical supplies.

Mariupol city officials say that, during the siege, all food, water, and medical supplies were cut off with people spending weeks in their basements to shelter from shells.

Routes into and out of Mariupol were heavily mined and shelled, meaning humanitarian convoys struggled to get aid to people. Civilian convoys trying to evacuate people were often shot at.

Images taken in the city during the siege showed mass graves being dug by the side of roads so corpses could be buried.

Survivors recalled leaving the corpses relatives inside their homes for days on end because they were unable to bury them, or of digging shallow pits in their gardens.

As a result, the exact death toll remains a matter of conjecture. But Ukrainian officials have long-warned the toll on Mariupol is almost certain to dwarf the atrocities uncovered in the likes of Bucha, Irpin and Izyum.

Analysts have been tracking several mass burial sites around Mariupol for evidence of the true scale of the civilian death toll.

Satellite images of grave sites in Staryi Krym, Manhush and Vynohradne show they have all being growing steadily since the spring. 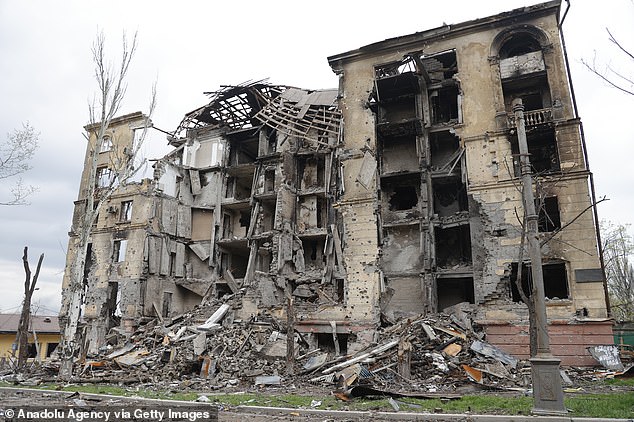 Kyiv officials say 25,000 civilians likely died during Russia’s siege of Mariupol including up to 7,000 who perished under the rubble of their destroyed homes

Analysts spotted 1,700 new graves added to Staryi Krym site between the start of Russia’s invasion and May 12 – shortly before the last Ukrainian troops surrendered.

Another 1,400 graves were then added between that date and June 29, when a fresh satellite image of the area was taken.

Analysts said it is not possible to determine how many bodies are buried in each pit, meaning the true death toll could actually be higher.

Miami homeowner gets sister, companion evicted from front porch after they squatted for 2 years