During a morning that starts with the usual grind – deleting unsolicited emails and messages, avoiding scams, saying no to cookies, trying to unsubscribe to something or other – the realisation hits home that 2022 has been the year digital finally failed on its promise. The bill fell due and the illusions were punctured. 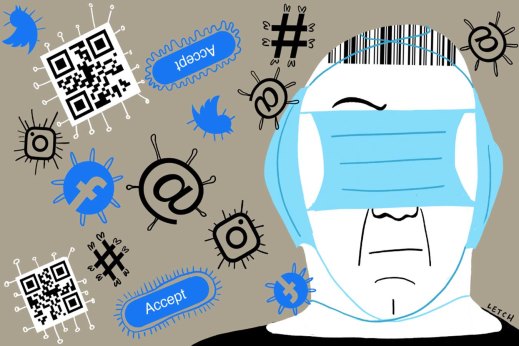 There was a saying in the Soviet Union about institutions that were “free to get in, you only paid when you tried to get out”. It’s a good epitaph for the first three decades of the capitalist online world. The more you withdraw from it, as it fails, the tighter its jaws clamp on your ankle. The headline acts of the 2022 collapse – the Elon Musk Twitter meltdown, the crypto bubble implosion, the Facebook/Meta nosedive, the struggles of the once-mighty streaming services – are footnotes to this larger story.

For the two-thirds of humanity that have gone online since the 1990s, the promise was something for nothing. Mail no longer needed a stamp. Calls no longer needed a coin. Writing no longer needed paper and ink. Television was no longer interrupted by ads. Aside from the infrastructure, so much suddenly became free. Subscriptions arrived, but those were acceptable, as was a measure of advertising because this would not be advertising as you knew it. Digital was so cool, it could decide who you were and only sell you what you really needed.

For its investors, government and private alike, the promise was growth first, monetise later. But as with every bubble since the beginning of bubbles, someone would get caught in the gap between stage one and stage two.

The first tech wreck 20 years ago caught the first suckers. Now, untold speculative growth and untold suckers later, the stakes are high enough to ruin even the world’s richest person (unless Mr Musk is the most clever and altruistic of all undercover agents, spending $US44 billion ($61 billion) to destroy both his own riches and the online sewer in one mighty swoop).

This is the year it all went down. Netflix lost hundreds of thousands of subscribers and half its market value and started asking you to pay to watch ads. Meta sacked one-eighth of its workers after pouring billions of real dollars down a pretend toilet. Medibank and Optus failed to keep customers’ information private and actual metal strongboxes, with real locks and keys, suddenly looked like the only safe storage. The Cloud? Pfff.

From the other end of the virtual food chain, that of the individual byte, the failure is even more apparent. I’m unbothered by the Medibank and Optus hacks, even though I’ve received the glum confessional letters from both and even though I have never ever been an Optus customer. (Maybe the letter from Optus was itself a scam.) I’m unbothered by this because I feel my personal information is already in the hands of those who are pummelling me with their rotten garbage, which I let them do every time I submit my email address and/or mobile number. It’s the price you pay for, you know, buying something in a shop.

I’ve never been on Twitter and my unused Facebook account receives nothing but advertising messages. The less I use Instagram, the more it rewards my inactivity with sponsored posts. Good old email? An actual email addressing me, that I want or need to read, from a person, now constitutes a third of my inbox. On my phone, which I thought was more or less private, only scammers and spruikers seem to call. A growing portion of text messages are traps laid by the descendants of those noughties Nigerian princes.

The global village, for the inhabitant, feels increasingly like a village under siege. This process hit hyperdrive during the pandemic. We know what the crims were doing in lockdown. You’d have been naive to swallow the promise of free content. Advertising is an acceptable fact of life. (I have a running debate with a friend over our favourite podcast, which began ad-free but is now gummed up by it. I’m OK with that form of payment; he is not.) But the digital promise was that advertising would be targeted, and the sophisticated harvesting of our data would “benefit” us by tailoring advertising to our needs. That promise has failed.

Here are the allurements I receive. Casinos (but I don’t gamble). Bitcoin and cryptocurrency (ditto). Diabetes (not yet, touch wood). NHS (WTF?). Online communities (never joined any). Penis enlargement (not physically possible). Ukrainian girls (you don’t think they’ve got enough troubles without me and my unenlargeable penis?). And so on. Like the Soviet citizen, the less you engage, the more interested they are in you.

When you find yourself the object of bulk, untargeted, unlimited solicitation, it becomes evident that new media have followed the exact opposite trajectory of old media. Television and radio began with unfettered advertising through sponsored dramatic and factual programs, heavily sponsor-controlled news, “live reads” and constant advertising bombardment. Over the decades, the amount of advertising was restricted and the line between sponsorship and “content” was drawn, if not always complied with. Broadcast moved towards narrowcast. Ethical controls against deception actually grew stronger over time, believe it or not.

With online, conversely, the truly free and truly narrowcast were the first phase, steadily breaking down until we arrive at 2022 where anything goes and your eyeballs and earholes are under limitless assault from the monetisers and the fraudsters. The less you engage, the more they seem to think you want them in your home: a curious inversion of consumerism but an Orwellian prophecy come true.

New beginnings and alternatives are on offer. I guess, digitally, we’ve hit the ’60s. Drop out into some other social network. Wipe your details, join a dark-web cult. Those too are on the road to being commercialised. The only true escape is internal, to switch off, find freedom in personal isolation. Oh dear, that’s just what we need.

Malcolm Knox is a regular columnist.

More from our award-winning columnists

An anxious nation: Mortgage stress, COVID burnout, extreme weather and the cost of living crisis – no wonder Australia’s status as the “lifestyle superpower of the world” is under threat – Nick Bryant

The future of democracy: Australia must learn from America’s descent into extreme inequality, which has led to deep discontent. It must also do more to civilise “social” media – the great amplifier of hate – Peter Hartcher

Behind the interview: Shane Warne may have been the greatest bowler legendary interviewer and cricket lover Michael Parkinson has ever seen, but he’s not his favourite interview – Peter FitzSimons