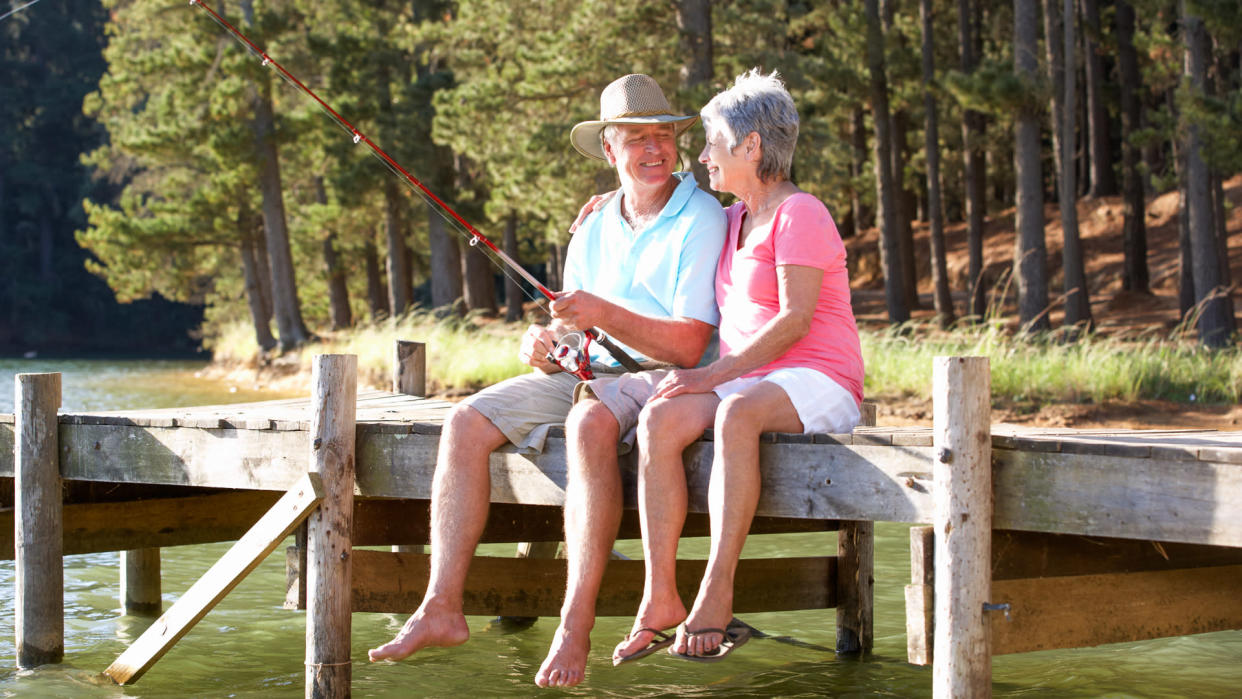 Over half of retirees never move, according to the Center for Retirement Research. Instead, they remain in the same home they lived in during their early 50s, also known as aging in place. If you’re of the mind to pull up your roots and head somewhere new in retirement, it makes sense to relocate somewhere where the cost of living won’t strain your budget — and you can also enjoy spending time outdoors.

Find Out: Can I Draw Social Security at 62 and Still Work Full Time?
Learn: 7 Surprisingly Easy Ways To Reach Your Retirement Goals

For example, cities where the average home value or rent is lower than the national average and the average annual temperature ranges between 50 and 80 degrees would be ideal. With all of the places to move in the U.S., it could take a while to narrow down a list of retirement destination possibilities. To help, here are eight surprisingly affordable cities for retirees that also have great weather. 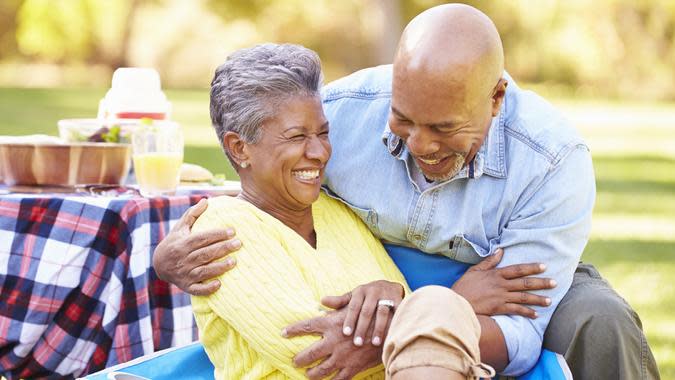 Tarboro, North Carolina
According to Zillow, the typical U.S. home value is $357,107, over three times what you’d pay, on average, in Tarboro, which has a median home value of $111,114.Not only is this city affordable, but you’ll also be in good company in Tarboro: 27.6% of the population is 65 and older. Plus, the average temperature there is 60.8 degrees.Although Tarboro is considered a smaller city of about 10,800 people, Greenville, North Carolina — with a population of over 92,000 — is only about half an hour away and is widely known for its medical and cultural offerings.Take Our Poll: Have You Ever Lost Wealth Due To a Natural Disaster? 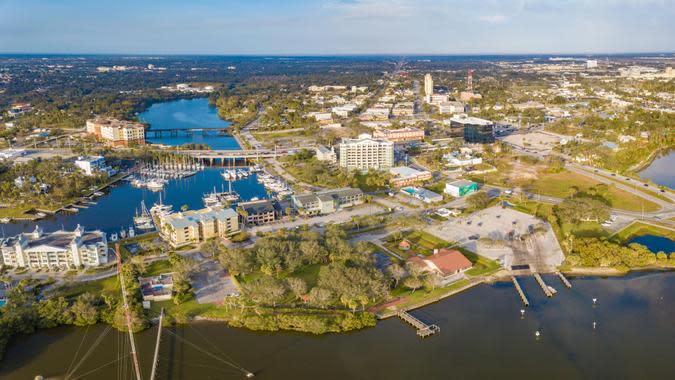 Melbourne, Florida
If you’re not opposed to renting in retirement, the average rent for a one-bedroom apartment in Melbourne is $1,230.29. To give you perspective, the national average for rent on a one-bedroom apartment is $1,721, according to recent data from Rent.You can expect to spend about $2,049.79 for monthly expenditures, such as groceries, rent and healthcare. Healthcare in Melbourne is about $24 lower than the national average, which is $431.32.The average annual temperature is mild at 72.4 degrees, and 21% of the population is 65 and older. 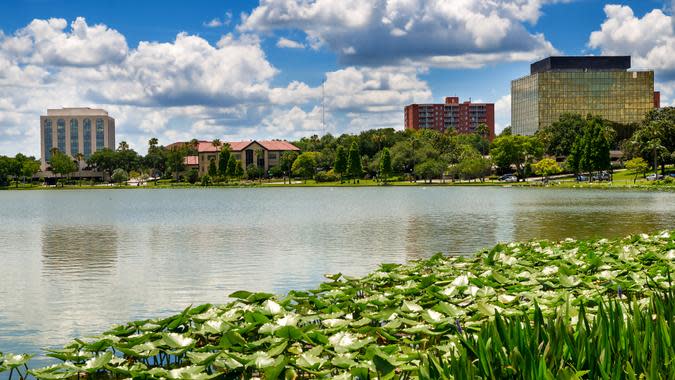 Lakeland, Florida
The average annual temperature in Lakeland is 72.6 degrees — not that different from Melbourne’s. And the cost of living is pretty similar too.Rent for a one-bedroom is $1,199.86 and total monthly expenditures are $2,038.70. Even the amount of retirees living in Lakeland who are 65 and older closely matches Melbourne’s retired population — 20% versus 21%, respectively. 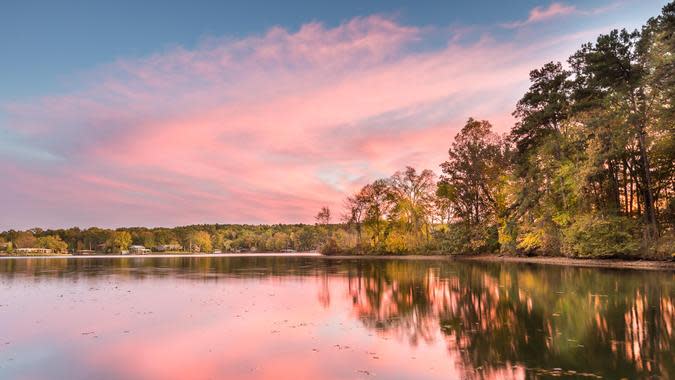 Mountain Home, Arkansas
If fishing, canoeing, camping and hiking are activities you plan to enjoy in retirement, Mountain Home is the perfect retirement destination.The town sits between the Ozark Mountains and is surrounded by lakes and rivers. The best part is that retirees can enjoy an average annual temperature of just 69 degrees.Additionally, the average home value is $178,079 — a little less than half the national average of just over $357,000. It’s not a huge, booming city due to its modest population of 12,463, but the percentage of the population who are 65 and older is promising at 29%. 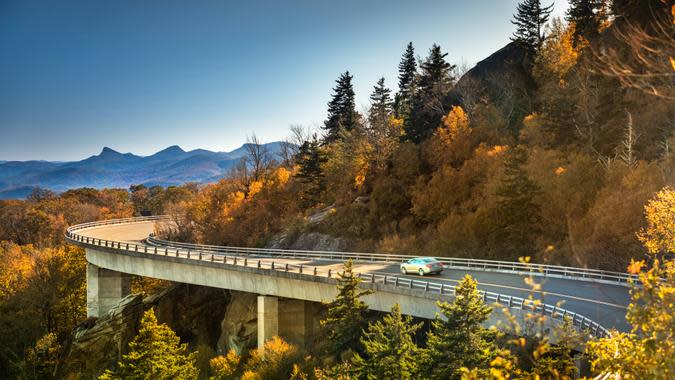 Mount Airy, North Carolina
Located just 15 minutes from the Blue Ridge Parkway, Mount Airy is full of opportunities for retirees who enjoy scenic beauty. With an average annual temperature of just 55.2 degrees, outdoor activities can be easily enjoyed too.The median home value in the city is $153,561, over $200,000 lower than the typical U.S. home value. Although the total population is only 10,213, the city prides itself on its amenities, including healthcare and cultural arts.Retirees hold their own there, as well — the percentage of the population 65 and older is 26.7%. 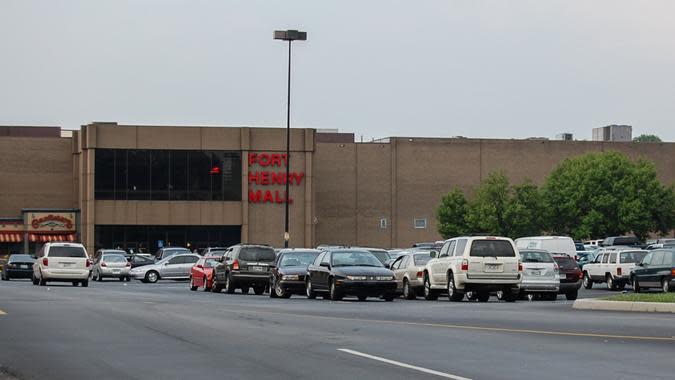 Kingsport, Tennessee
If you’re a retiree who is looking for a little larger city to reside in, Kingsport might be the perfect choice. The total population is 53,699 and 25% of the people there are 65 and older.The average annual temperature in Kingsport is 57 degrees, and it’s known for its mild summer climate due to it being close to the mountains. If you’re an avid golfer, there are 20 golf courses in the surrounding area.The median home value there is well below the typical U.S. home value at $195,583, as well. 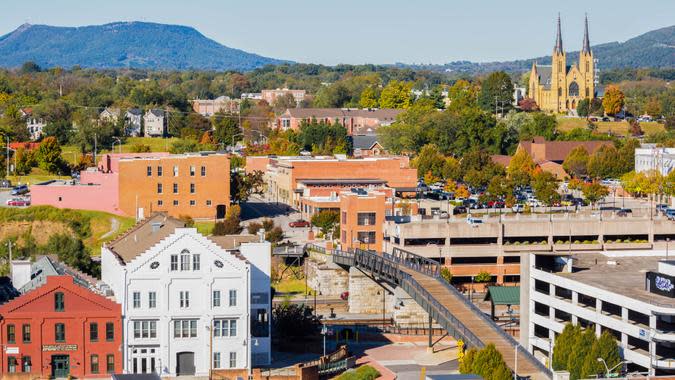 Roanoke, Virginia
You can expect to see sunshine the majority of the time in Roanoke. On average, the sun shines 211 days out of the year there, with the average for the U.S. being 208.This is another city where retirees will find renting affordable. Typical rent for a one-bedroom is $919.71, and total monthly expenditures equal $1,783.82. Plus, 20% of the population is 65 and older. 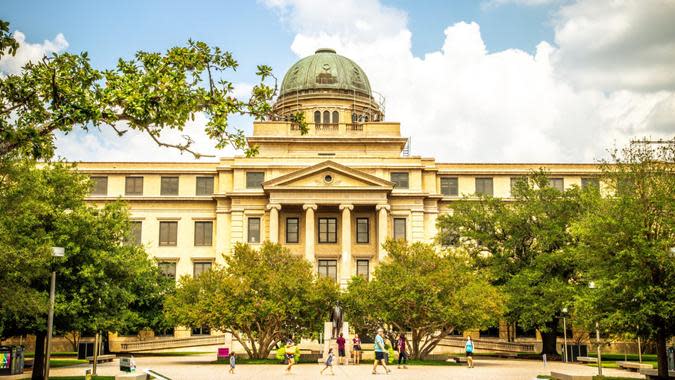 College Station, Texas
With an average high temperature of 79 and an average low of 59, this Texas town qualifies as having great weather. It’s home to Texas A&M University, which means a sizable college population, but retirees still make up 6.7% of the population of 120,019.Total monthly expenses are affordable at $1,664.72, with the average rent for a one bedroom at $841.14 and a monthly grocery bill at right under $400.More From GOBankingRates9 Bills You Should Never Put on Autopay
Get Ready for Retirement Now With Expert Tips for Every Stage of Life
Should You Still Buy a Home in Today’s Market?
10 Things to Do Now If Your Credit Score Is Under 700