The kiss of death: Chilling moment a leopard tenderly nuzzles a baby impala – before reverting to type and and killing it when it tries to escape

A fearsome feline predator appeared to show its gentle side as it tenderly nuzzled and pawed at a young baby impala, forming what seemed like an unusual friendship.

An hour later things took a chilling turn, as the leopardess gave in to its natural urges and fatally killed the vulnerable young animal in Greater Kurger National Park, South Africa.

Senior game ranger Reynard Moolman, 26, captured the chilling images that showed how the large feline toyed with its prey for the greater part of an hour, before a fatal, final pounce as it tried to escape. 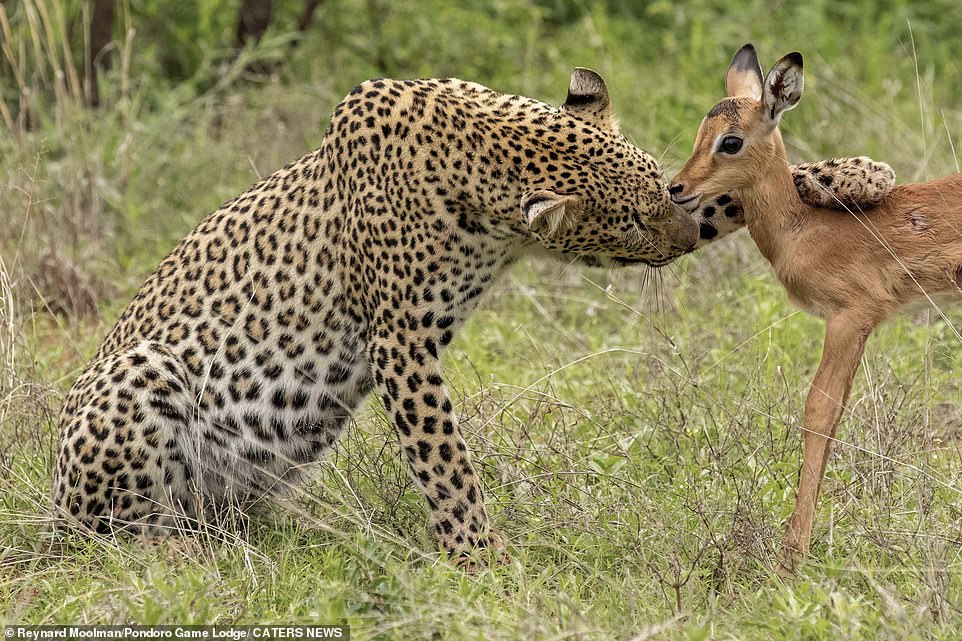 Senior game ranger Reynard Moolman, 26, captured the leopardess, Nkanyi, as she appeared to nuzzle and pay at the impala gently 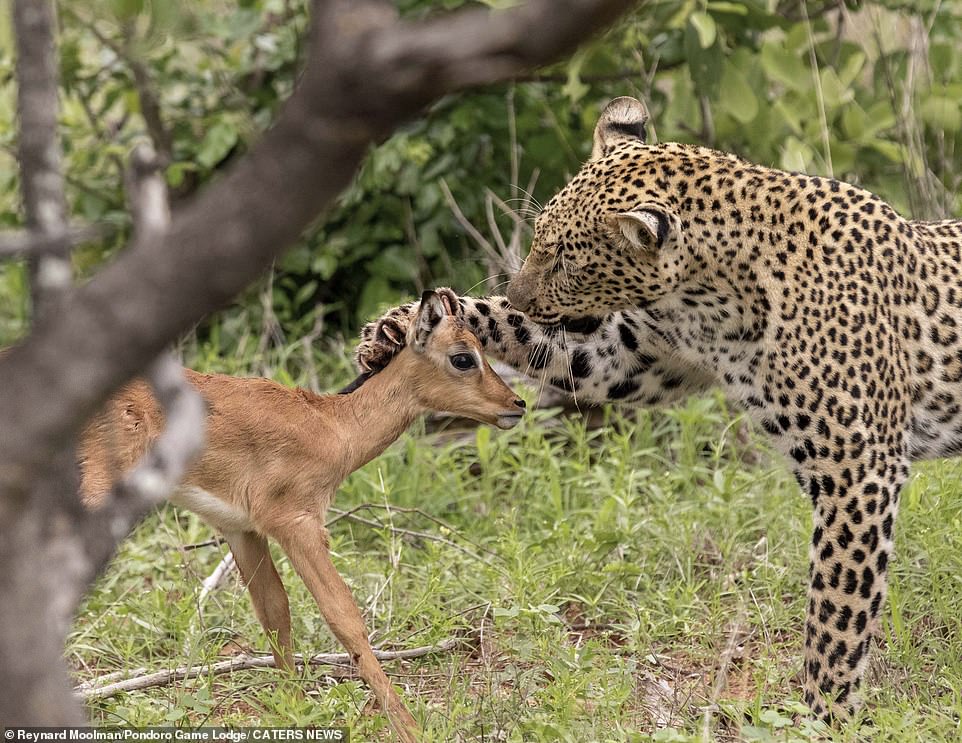 The leopardess toyed at the defenseless calve for about an hour, circling around the creature, repeatedly nuzzling it and touching its head with its large paw 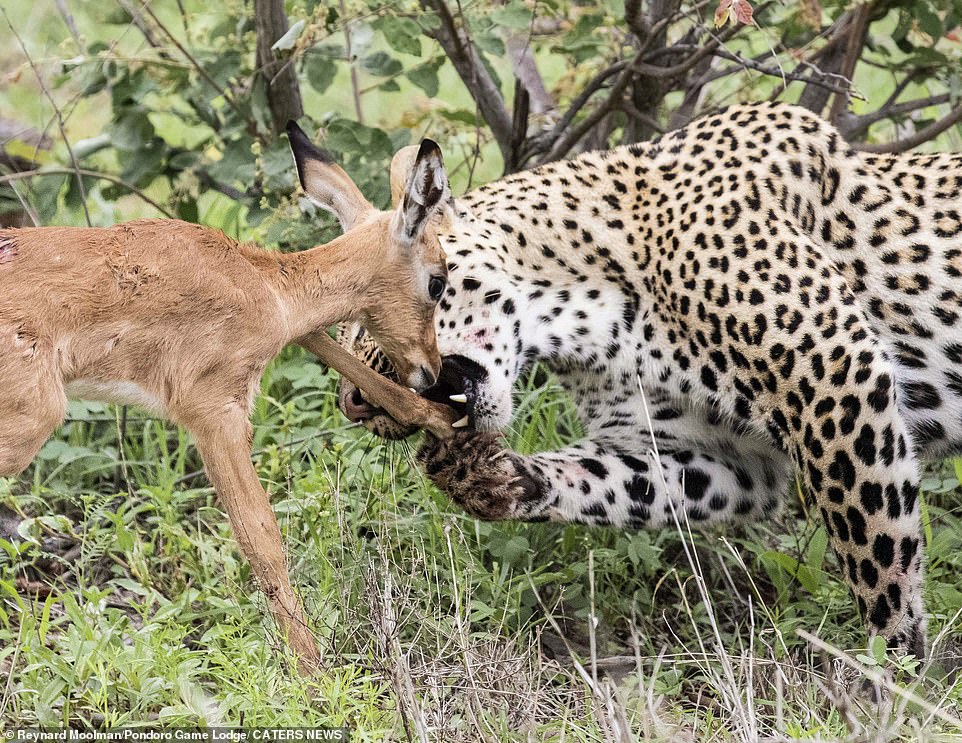 He described seeing the leopardess, called Nkanyi, early one morning lying on her back in the scrub, near the impala.

Mr Moolman, who is from Johannesburg, said the leopardess seemed calm and appeared to be enjoying playing with the baby creature.

‘Nkanyi seemed to enjoy the game, even walking around the impala, he said. ‘It was clear that Nkanyi had no intention of ending her hunt any time soon.

‘We witnessed some behaviour that I personally have never even heard of before. At points she even seemed to caress the impala, showing minimal aggression towards it.

‘The only thing that I have ever seen that comes close to it, is a large domestic dog playing with a smaller one. This was obviously not the case.’ 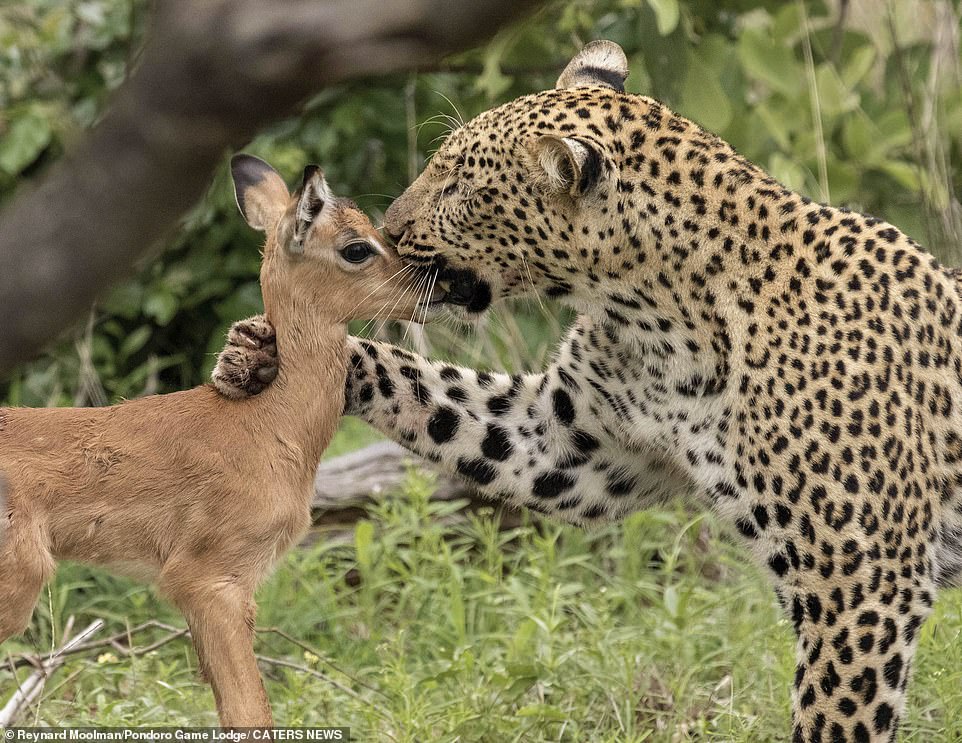 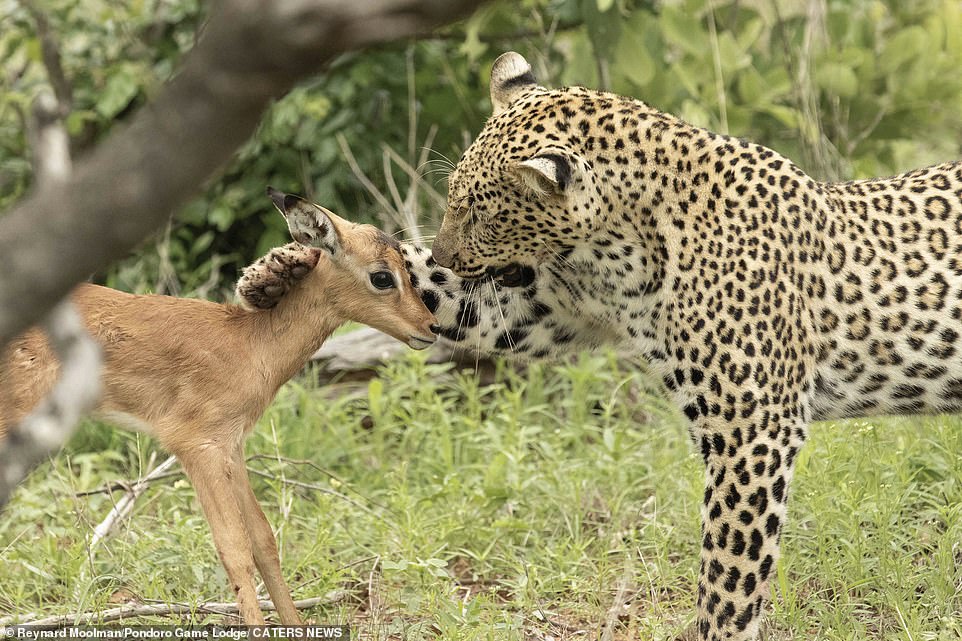 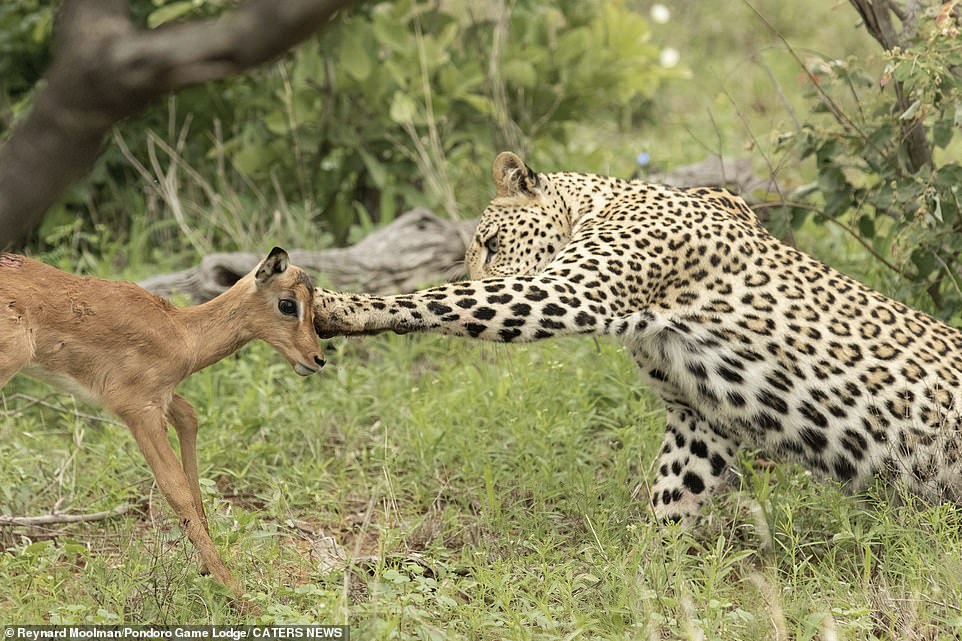 As the leopardess continued to toy with its prey, a grown impala could be heard calling out in distress. 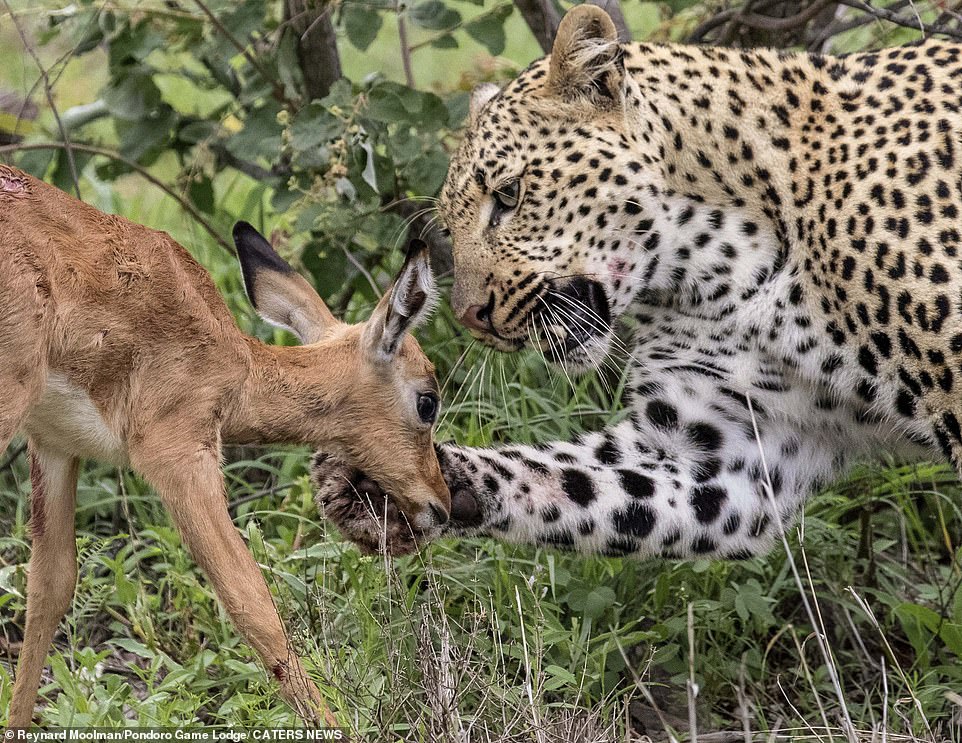 Mr Moolman said it could have been a case of the leopardess trying to keep the prey alive for as long as possible, practicing her skills.

‘Cats of all sizes will at opportunity catch and ”play” with prey in order to get as much practice and experience out of the hunt as possible.’

He said the baby impala eventually tried to make a bid for freedom, but was killed. Meanwhile, nearby, an adult female impala, likely the calf’s mother could be heard crying.

Mr Moolman said while it was heartbreaking to watch, and listen to, it was nature, doing what nature did.

‘We all knew what the outcome of this sighting would be,’ he said. ‘Between the crying bleats coming from the fawn, the calling of the adult nearby and the futile attempts at escape we were all a little heartbroken.

‘Regardless of the fact that we know it is nature and animals get killed for others to survive, it was a tough pill to swallow.’ 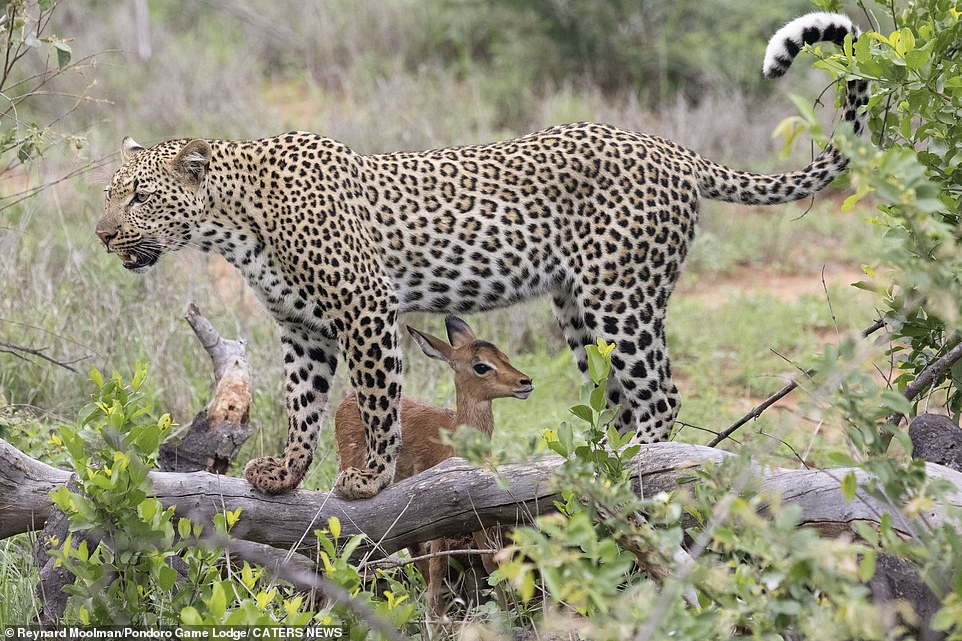 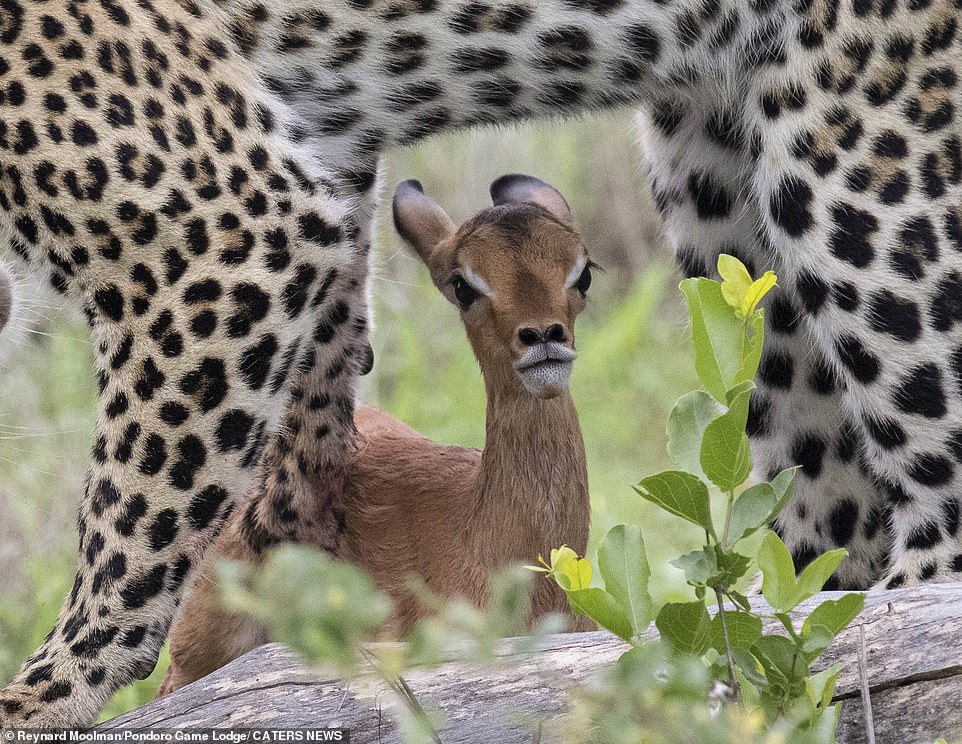