As pharmaceutical companies spend hundreds of millions on a potential treatment for Alzheimer’s disease, other researchers are focusing on a more elemental question.

How can you tell whether a family member or loved one has Alzheimer’s or another form of dementia?

These researchers say a new generation of blood tests could offer an easier and accurate way to detect signs of Alzheimer’s, a disease that afflicts an estimated 6.5 million Americans.

New research found one blood test can detect hallmarks of the disease in older adults with memory problems. It is among more than a half-dozen blood tests being developed and tested to detect early stages of Alzheimer’s disease.

Experts say the tests are important because they would be easier, cheaper and available to more people than brain scans or spinal taps now used to detect biological hallmarks of the disease. 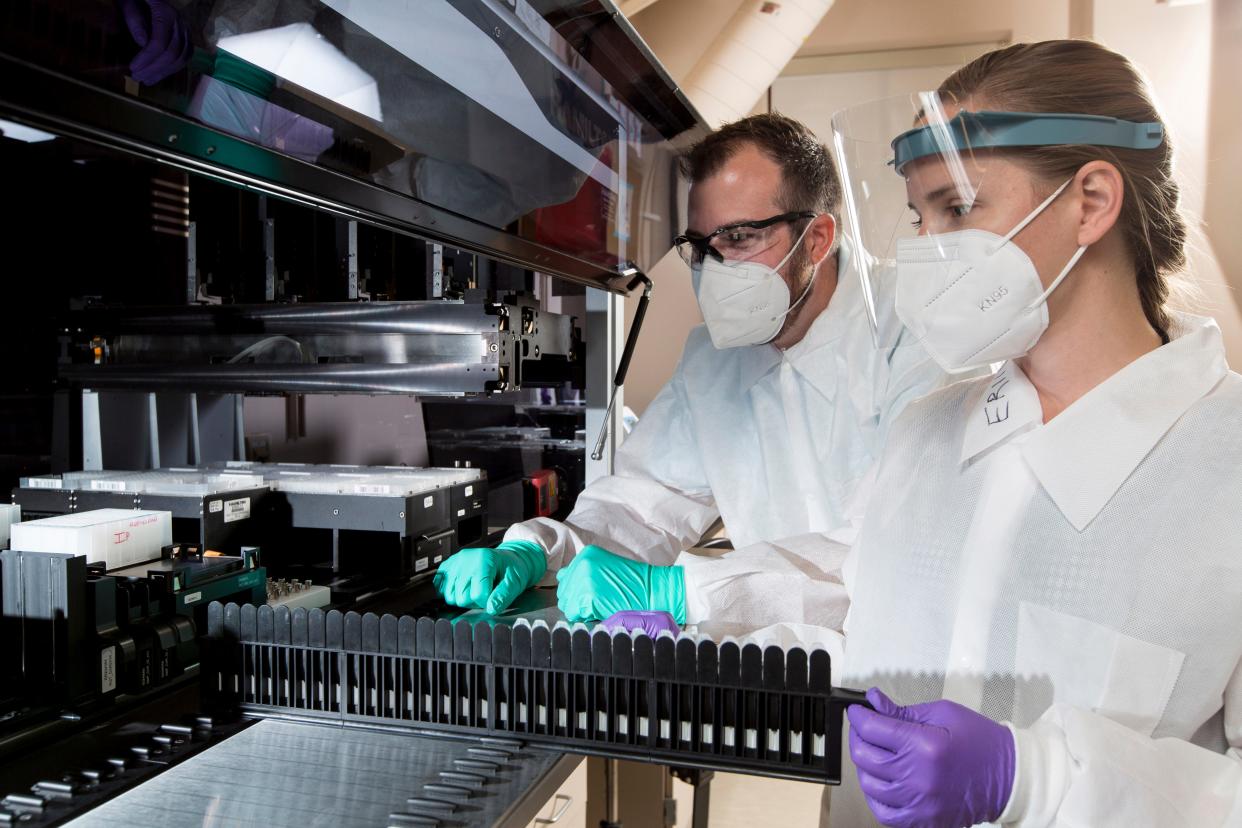 Developers of blood tests say the immediate payoff would be testing older adults with signs of memory loss as well as quickly screening large numbers of people necessary to test new drugs that aim to slow or halt Alzheimer's disease. Eventually, the tests might be useful in detecting the earliest signs of disease, informing individuals of their risk years before memory and thinking problems take root.

Blood tests represent “a very early start to a new era of diagnosis for Alzheimer’s disease,” said Stephen Salloway, a professor of neurology and psychiatry at Brown University who directs a memory and aging program at Butler Hospital in Providence, Rhode Island. "I see them as being transformative for Alzheimer's because once we validate them a little bit further, and hopefully get coverage for them, we can use them both to screen for clinical trials and to screen for treatment."

Diagnosing the disease is time-consuming and inaccessible to those who live far away from memory clinics or other specialists. Doctors might quiz a patient or family members about habits, changes in behavior or personality. Specialists conduct memory and thinking tests and rule out other potential causes such as depression. Brain scans and spinal taps confirm biological signs of the disease.

One blood test, called the PrecivityAD test, which uses a technology called mass spectrometry, measures amyloid proteins and genetic risk for the disease. In two studies published April 21 in Journal of the American Medical Association Open, the test accurately detected the protein amyloid in 81% of samples when compared with a brain scan.

Amyloid accumulates and forms clumps in the brains of Alzheimer’s disease patients. Researchers and drug companies have spent hundreds of million of dollars over the past two decades on the theory that drugs clearing amyloid from the brain could slow memory decline, but those drugs have not proven to halt Alzheimer's disease. Other drug studies are now underway to administer amyloid-targeting drugs even earlier, before memory and thinking problems emerge.

C2N Diagnostics CEO Joel Braunstein said the peer-reviewed study is an important step for doctors who want to see more evidence before recommending his company's test to patients with memory and thinking problems.

“Clinicians like to see evidence that a test works,” Braunstein said. “This was an important step forward because of the transparency of the scientific findings.”

The test, which has been available since 2020, is now mostly used to accelerate research for new drugs being studied to slow cognitive decline and memory loss in people with Alzheimer’s disease or other forms of dementia. Braunstein believes more doctors will be willing to recommend the test as they grow comfortable from findings in the studies.

Scans and spinal taps now used can be invasive and don’t work for all patients. For example, people who are on blood-thinning medication might not be able to get a spinal tap, Salloway said. In such cases, a validated blood test would be suitable replacement.

Blood tests also might be more affordable than positron emission tomography, or PET scans, which cost consumers $3,000 out of pocket, according to the Alzheimer's Association. Hospitals charge for administering a PET scan, which includes special chemical tracers to reveal the amyloid. Consumers also can expect a bill from an imaging specialist who interprets the results to verify whether a patient has amyloid.

The PrecivityAD test, which is not yet covered by Medicare or private insurers, costs $1,250. The company offers financial assistance for eligible consumers, Braunstein said, while it is “making progress” in efforts to get Medicare and private insurers to pay for the test.

The company is allowed to market the test under Food and Drug Administration rules because it's performed at the company's lab, which is certified under the Clinical Laboratory Improvement Amendments, the federal laboratory law known as CLIA. Doctors or testing sites ship samples to the lab and the company completes the test within 10 days, Braunstein said.

Braunstein said the company's lab has the capacity to handle tests performed within the United States and Canada. As the company seeks to offer the test overseas, it will likely partner with other labs that can perform the intricate measurements the test requires.

Another blood test developed by Eli Lilly detected signs of Alzheimer's disease 20 years before cognitive problems were expected in a group of people who carry a rare genetic mutation, according to a study published in 2020 in JAMA. The p-tau217 test measured the tau protein on more than 1,400 people already enrolled in dementia studies in Sweden, Arizona and Colombia.

Eli Lilly used the test during a 257-patient phase two study of its Alzheimer's drug called donanemab. The drug maker also will use the test to screen people for a prevention trial to test donanemab in at-risk patients who have not yet exhibited memory and thinking problems. Lilly plans to send mobile units to communities and use the test to screen people, which would expand the company's efforts to recruit patients from diverse populations, a Lilly spokeswoman said.

Advocacy organizations would like to see tests that are simple, inexpensive and accessible to doctors and their patients, said Heather Snyder, Alzheimer's Association vice president of medical and scientific relations.

"We ultimately want to be at a place where we can identify an individual at the earliest possible point who may be at the greatest risk and may have initial changes associated with the disease," Snyder said.

She said it's important for the field to have "a toolbox of potential interventions" such as medications or lifestyle changes "that would allow us to stop or slow the progression of the underlying biology at that time."

In 2021, the Food and Drug Administration approved Biogen's Aduhelm, a $28,000-per-year drug that yielded mixed results in clinical trials, even though the agency's own experts suggested the agency reject the application. The agency that oversees Medicare decided to pay for the drug only in clinical trials.

Ken Alltucker is on Twitter at @kalltucker, or can be emailed at [email protected]

Man, 54, slaughtered before his head skinned and eyes, ears and tongue cut out in horror ‘ritual killing’ in Kenya

Bette Midler calls Trump 'a PIG' and mocks his '$70,000 haircut' in wild rant during presidential debate against Biden