EXCLUSIVE: Every dog has its day! Parker the Shih Tzu, found caked in filth and maggots and on the brink of death, is on the road to recovery at a Florida shelter after undergoing extensive treatment and surgery to remove her uterus and eye

She was neglected for years and tossed away like ‘old garbage’, but Parker the rescued Shih Tzu is battling back to health – and enjoying her first ever hugs.

The tiny dog was found caked in filth and maggots earlier this month after her cruel owner threw her over the fence into an animal shelter in Boca Raton, Florida.

Staff at Tri-County Animal Rescue rallied to save the distraught pooch, carefully cutting away the more than two pounds of hair ‘cemented’ to her body and treating numerous wounds and sores.

She’s had to undergo surgeries to remove her uterus and one of her eyes but DailyMail.com can reveal that six-year-old Parker is slowly but surely recovering from her former life of abuse and mistreatment. 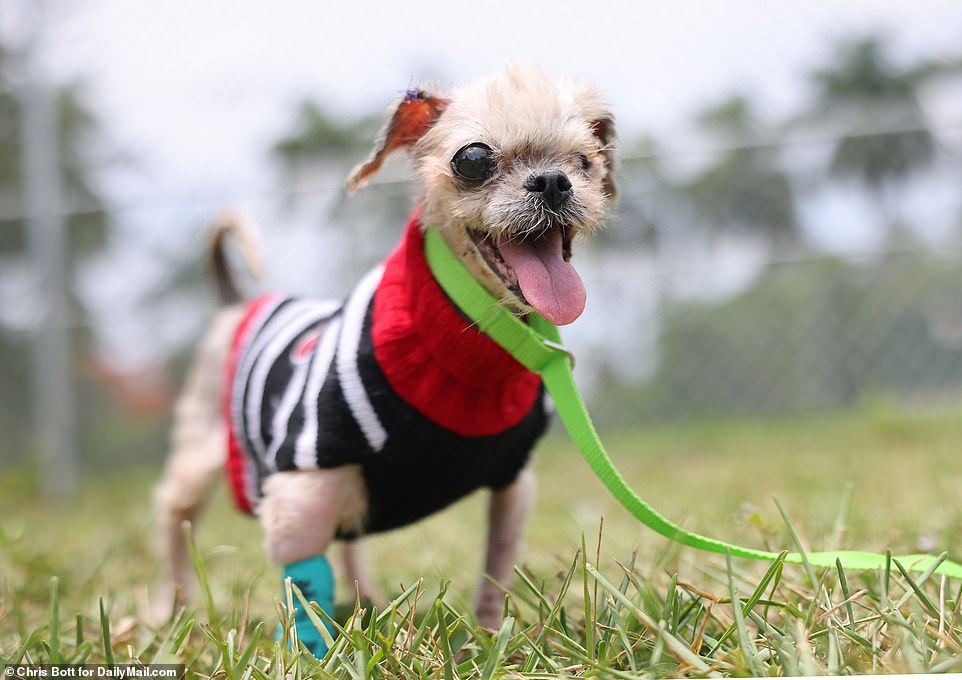 Parker the Shih Tzu made headlines earlier this month after she was found on the brink of death, and covered in maggots and filth. The adorable pooch is now on the road to recovery 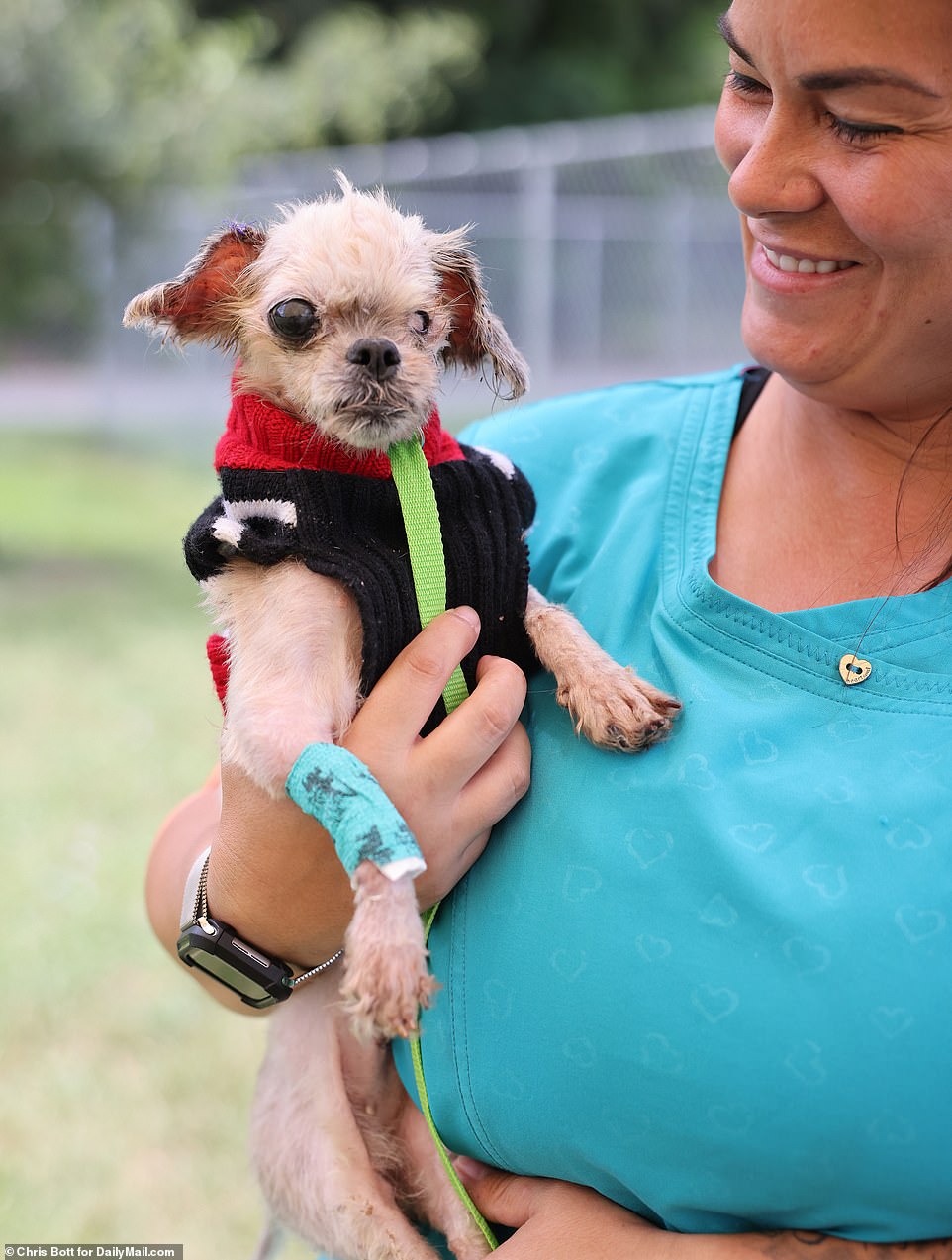 The six-year-old pup was rescued by the Tri-County animal shelter on June 8 and underwent surgeries to remove her uterus and one of her eyes. Vets also found mammary tumors that are now being tested 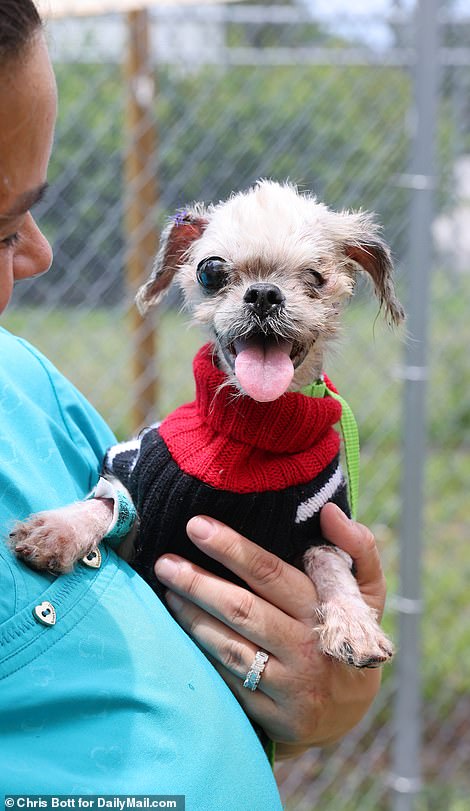 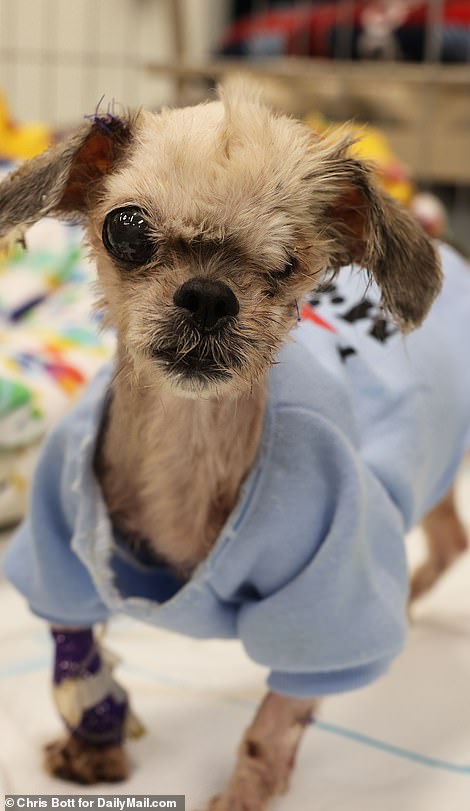 Parker’s health has improved significantly since, and she can now eat and walk on her own, and responds positively to human touch 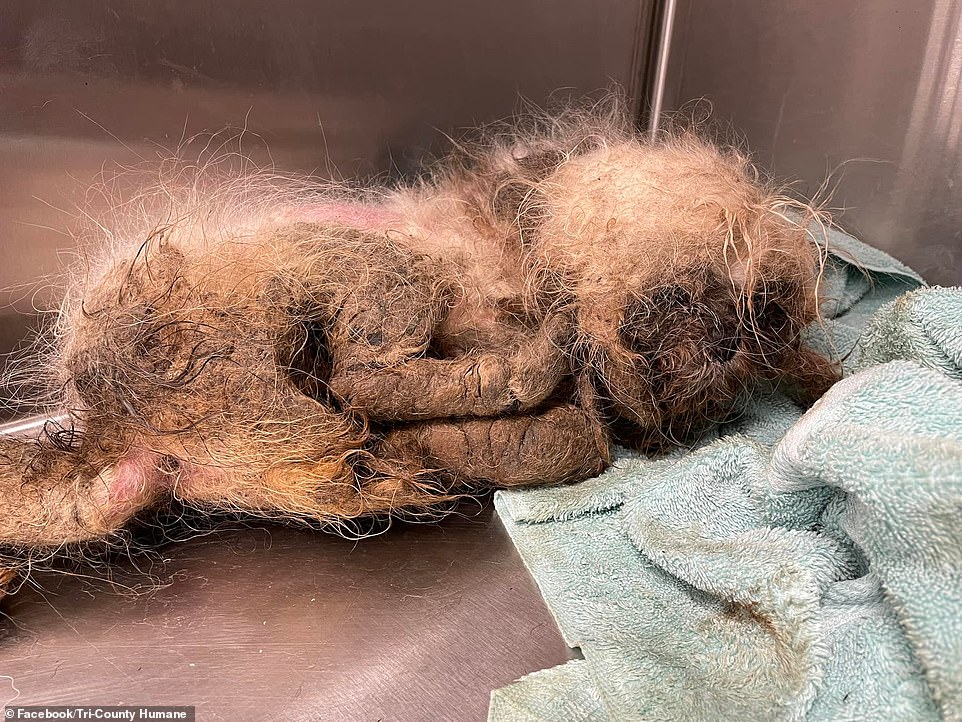 Shelter workers described Parker’s condition as ‘the worst’ they’ve seen in 27 years. She is seen above after being found by a dumpster near the shelter

And as these heartwarming images show, the brave canine is also bonding with her doting rescuers, who are now able to gently hold and hug Parker for the first time as she finally receives the love she deserves.

‘We see our fair share of abuse but the state that Parker was in was the worst that I’ve seen in 27 years,’ said Suzi Goldsmith, who founded Tri-County Animal Rescue nearly three decades ago.

‘Thankfully Parker is a remarkably courageous, strong animal who wanted another shot at life and that’s why she is alive today. She never had any human contact, she’s never been touched or loved until now. I’m thrilled with her progress.’

Parker was unchipped and without a collar when a volunteer arrived at 4am on June 8 to walk some of the shelter’s dogs and heard an animal howling out in pain.

The Shih Tzu was found cowering beside a dumpster and had either been tossed over the fence or abandoned elsewhere in the property before crawling to the spot where she was located.

Staff gave her a unisex name as they couldn’t initially tell whether she was male or female because the entire underside of her body was enveloped in matted, urine-soaked hair.

They couldn’t even tell if all of Parker’s limbs were intact because her nails had grown so long they were corkscrewed around her paws. 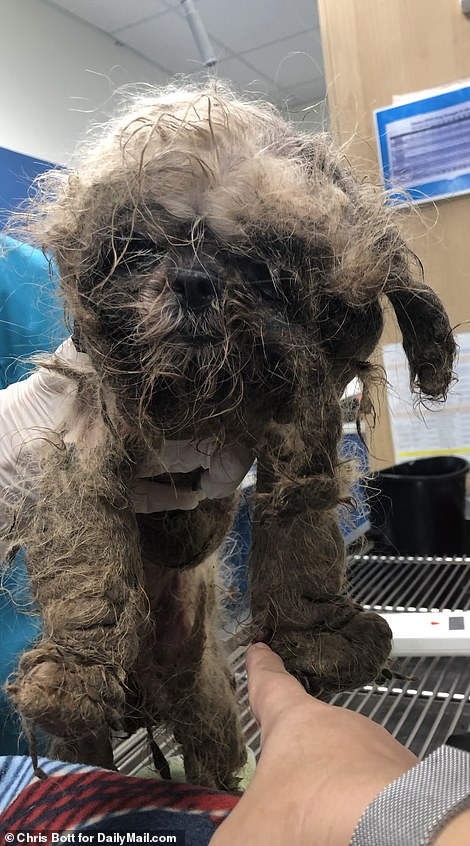 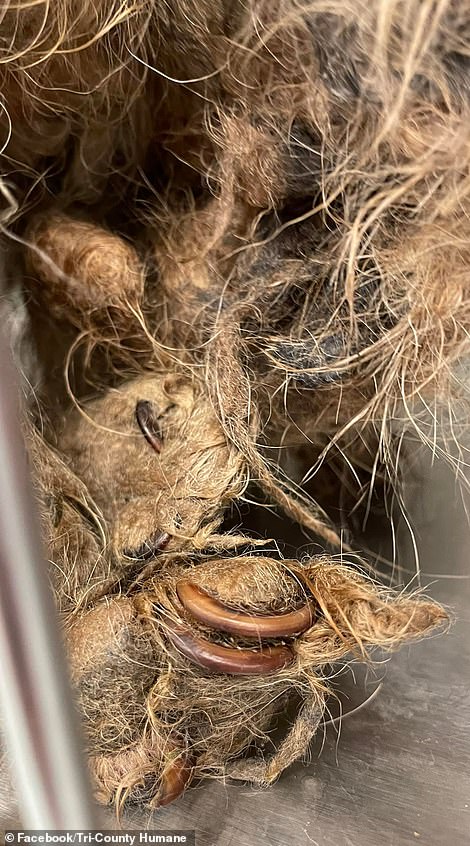 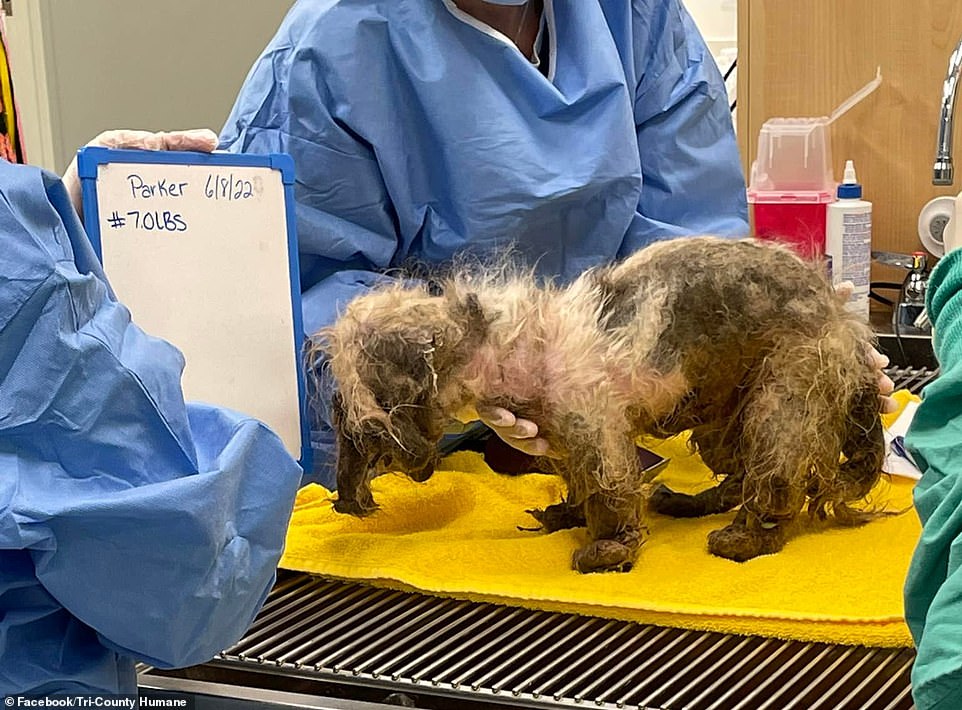 Parker, who was found unchipped and without a collar, was given a unisex name since staff couldn’t initially tell whether she was male or female because the entire underside of her body was enveloped in matted, urine-soaked hair 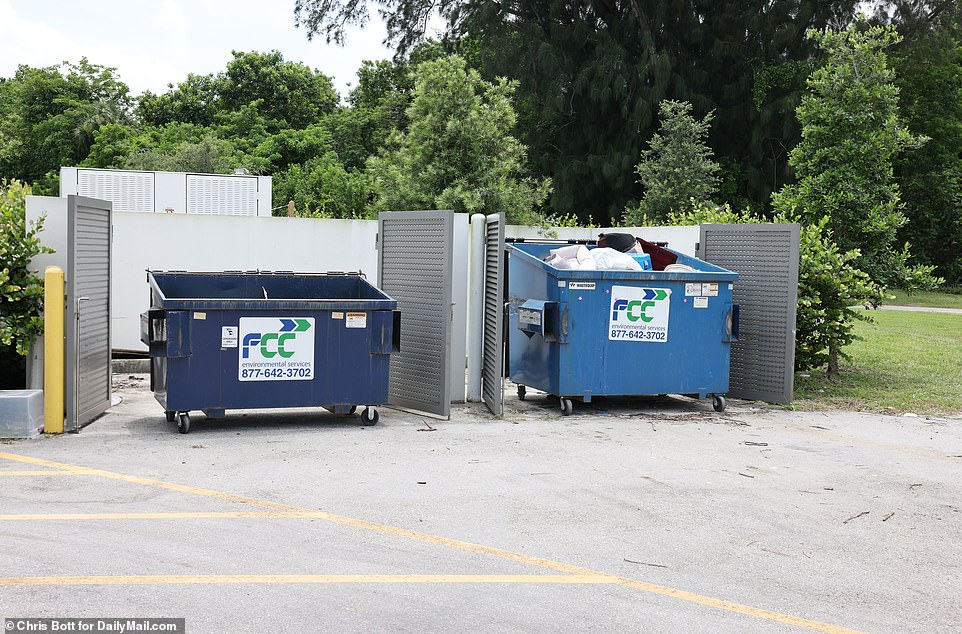 ‘The matting was so severe that we didn’t know where her legs began. Her tail was attached to her legs. We couldn’t even assess whether she had feet,’ explained the shelter’s hospital director, Dianna Otero.

‘Imagine every hair on your body being pulled out at the same time. It was constant torture for her. And this is not something that happens in five minutes or even over a year – she lived like this.

‘We are just lucky someone found her in the morning hours, it’s been so hot she could have fried outside. We’re in Florida, we have coyotes and other predators – she could have been eaten.’

The shelter’s veterinary team took more than three hours to painstakingly shave the dirt and matted hair from Parker’s skin and treat her sores which were riddled with maggots.

They discovered mammary tumors which are due to be removed and tested for cancer. It’s also possible that Parker’s remaining eye will have to be removed.

In spite of everything, however, the plucky animal has started to walk and eat on her own.

She’s responding positively to petting and is wearing cute sweaters and tiny outfits donated by animal-loving members of the public who don’t want Parker to get cold now all her hair has been removed.

‘Before, if you tried to hold her, Parker would try and bite you. If you picked her up she was in a lot of pain because her skin was sensitive. She was thrashing around like you were trying to murder her,’ Otero went on. 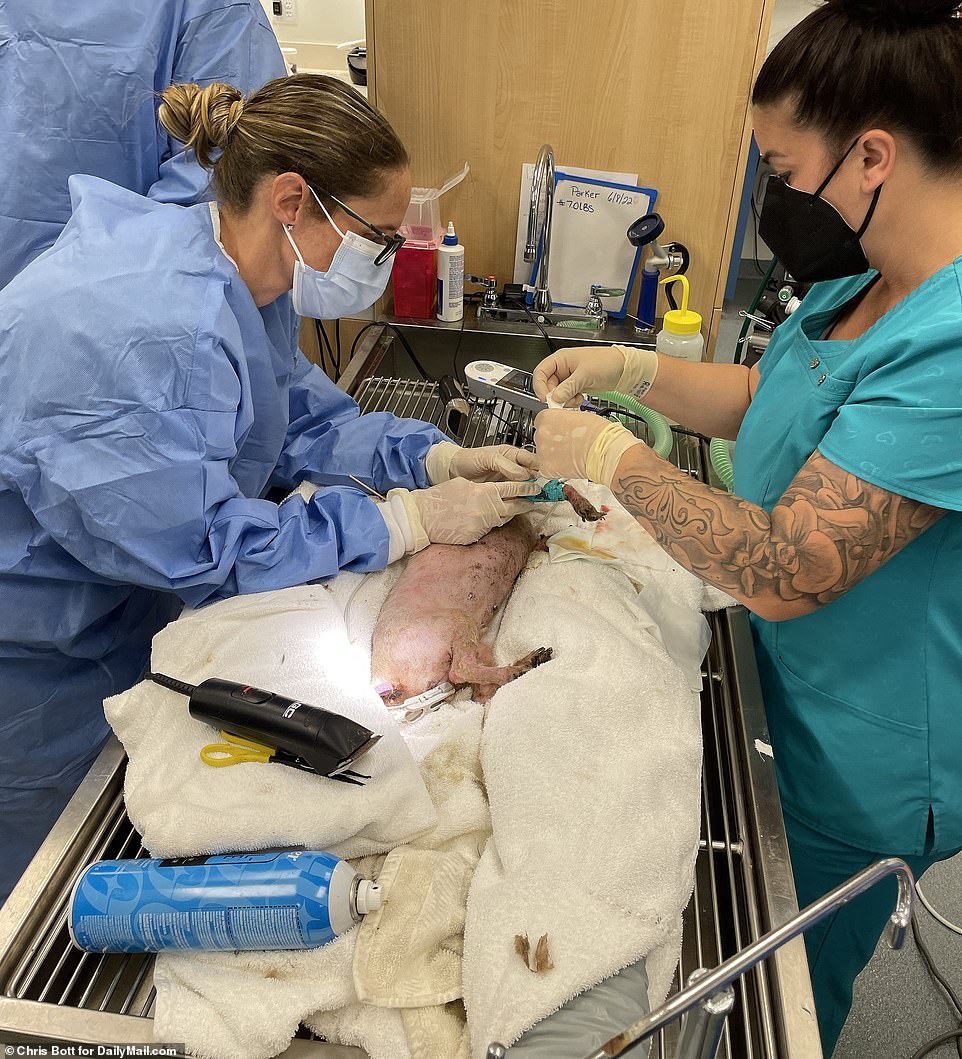 While veterinary staff have managed to nurse her back to health so far, the dog’s recovery is likely to take months rather than weeks 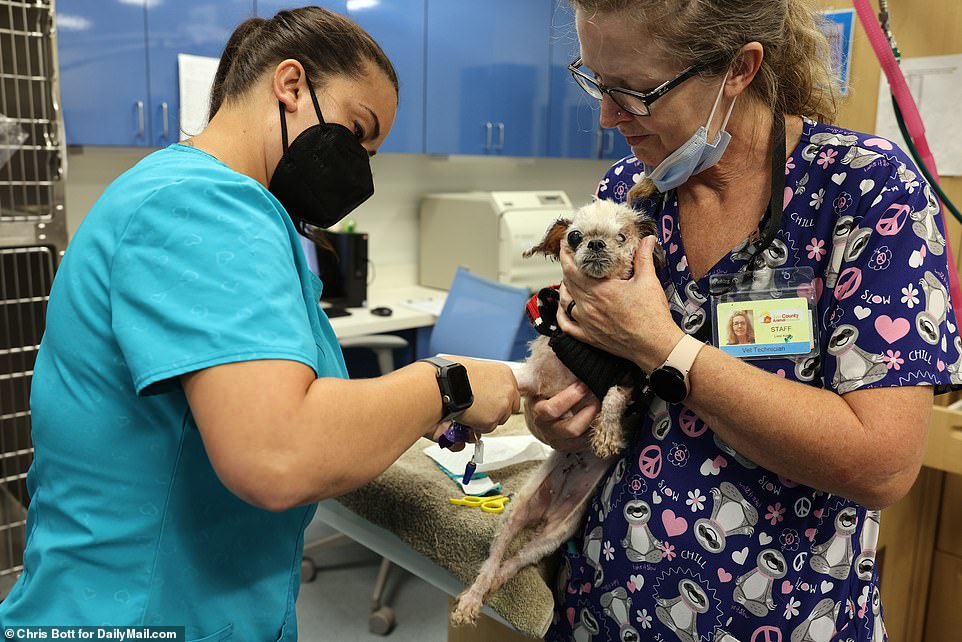 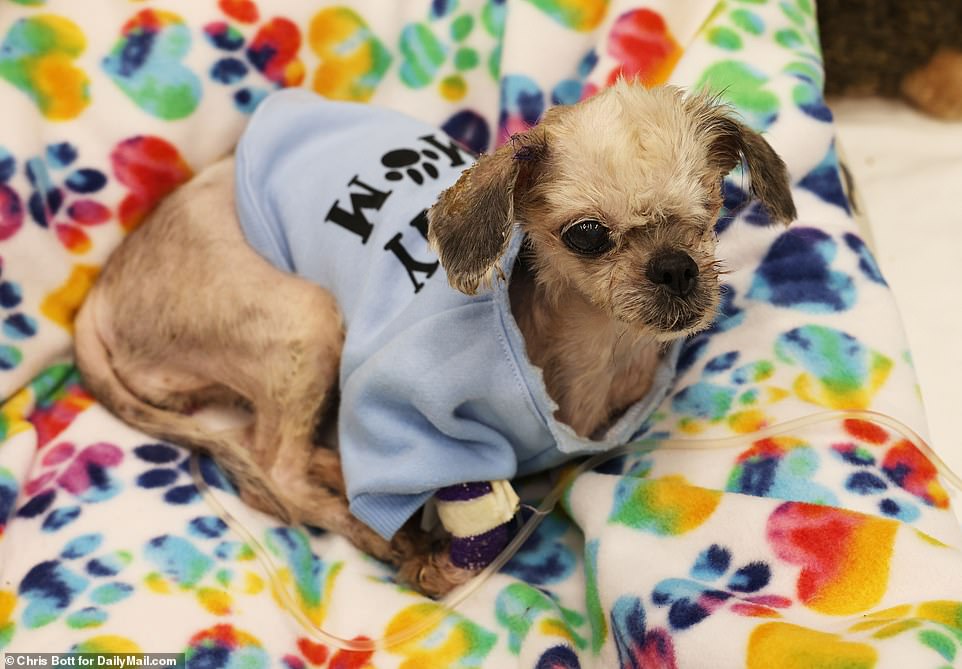 The dog was found unchipped and without a collar and was later given a unisex name since staff couldn’t initially tell whether she was male or female because the entire underside of her body was enveloped in matted, urine-soaked hair.

Her uterus had become infected and had to be removed, along with her left eye which had never developed properly because of a birth defect.

‘Now she’s tolerating being held. I laid with her in the grass and I was petting her the whole time. She is responding to finally having some contact, having some love.

‘She seems happier, she’s not so fearful. I really think she knows she’s famous.’

Parker’s rescuers are desperate to see similar progress in the hunt to find whoever was responsible for callously throwing the animal over the fence.

Goldsmith and her staff scoured their CCTV but couldn’t find any glimpse of the suspect. The Palm Beach County Sheriff’s Office launched a public appeal for leads but so far has not made any arrests.

Judging by her medical issues and the dire condition in which she was found, Goldsmith suspects that Parker’s owner was a so-called ‘backyard breeder’.

She likely spent her entire life locked in a cage being forced to breed over and over.

‘We all worry that she is just one of many more,’ added Goldsmith, whose non-profit has saved more than 80,000 cats and dogs to date.

‘There are wonderful breeders who breed the proper way and the correct way. Then there’s what I call the backyard breeders.

‘It all boils down to dollars and cents, they are after as much money as they can make and they don’t give a darn about the animals. 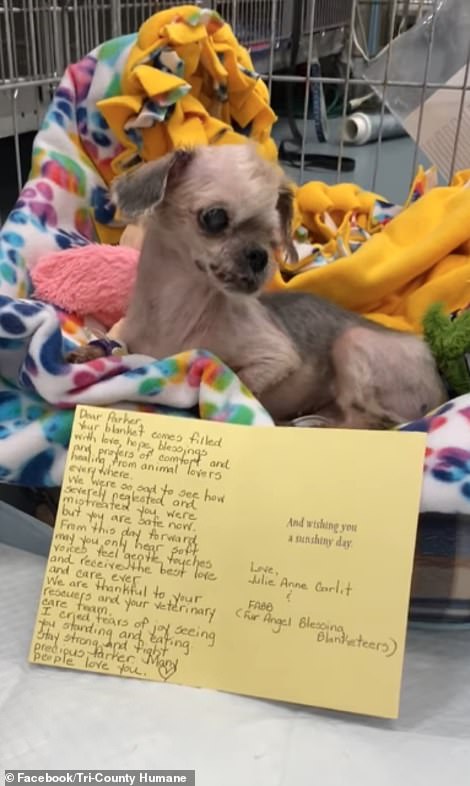 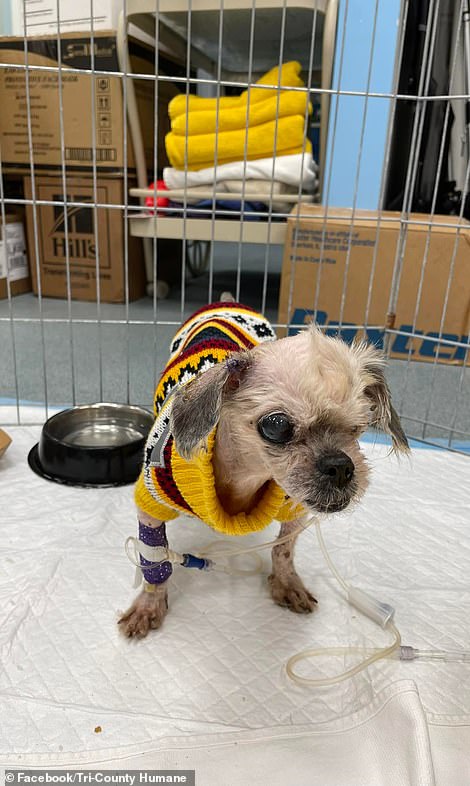 Staff say Parker’s tragic story has captured the hearts and attention of the members of the public who have her sent handwritten cards, blankets, and clothes 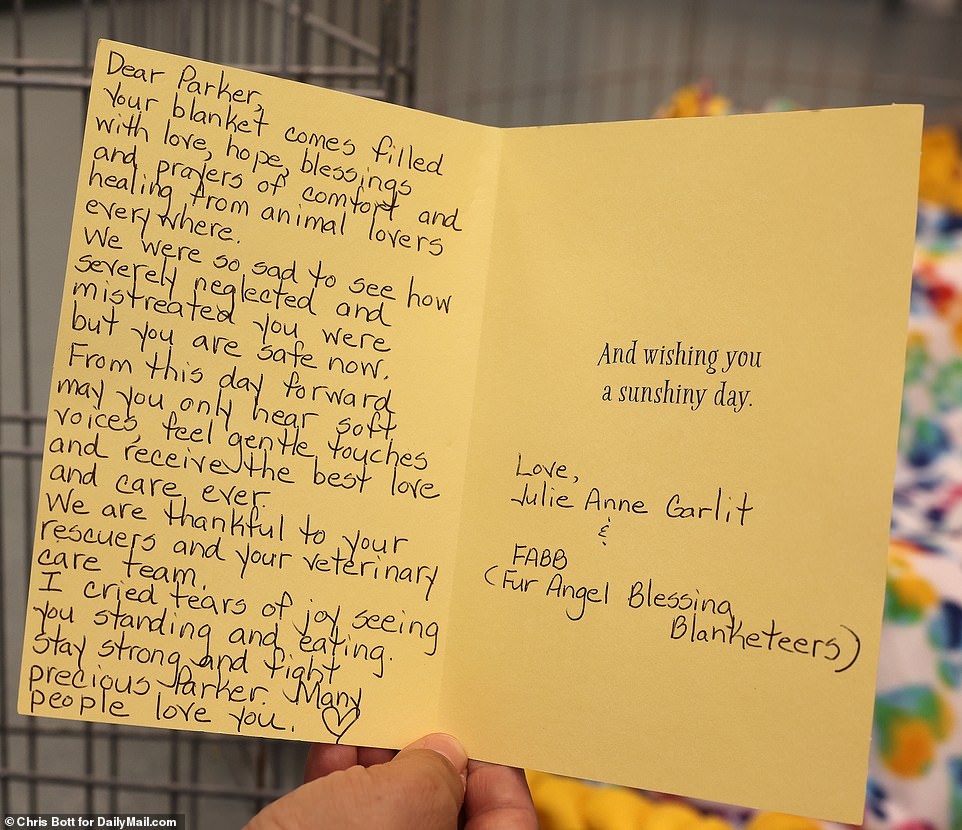 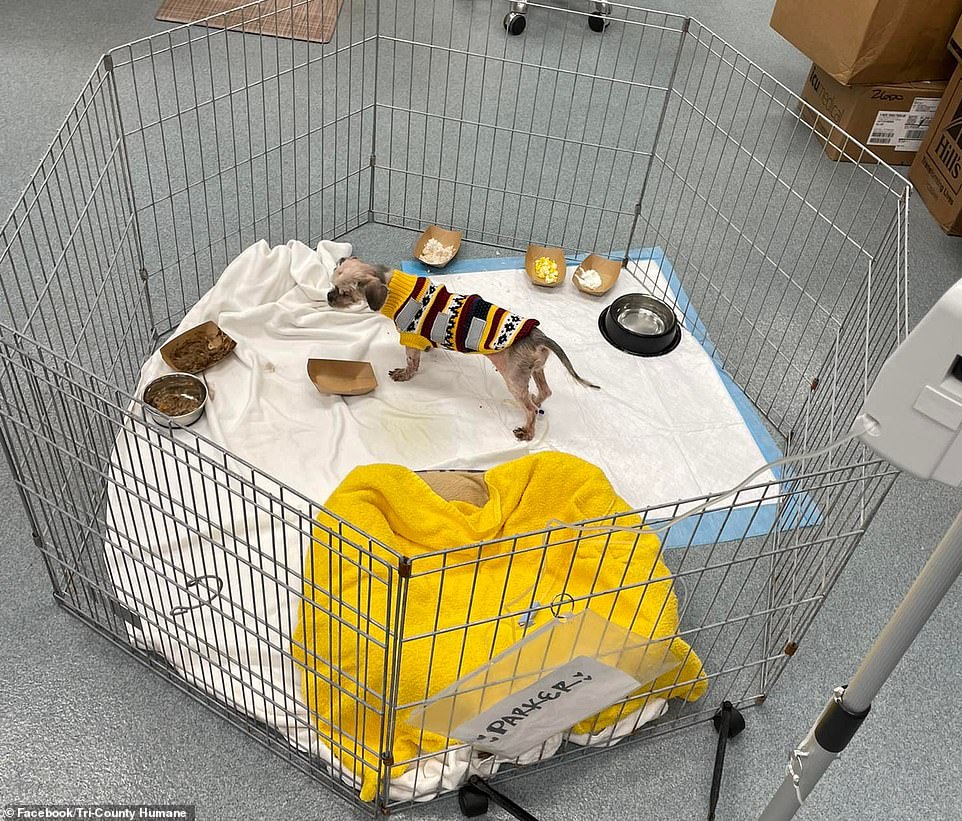 The Shih Tzu is now getting the proper care and love she never received at the shelter, where she will remain until she is adopted 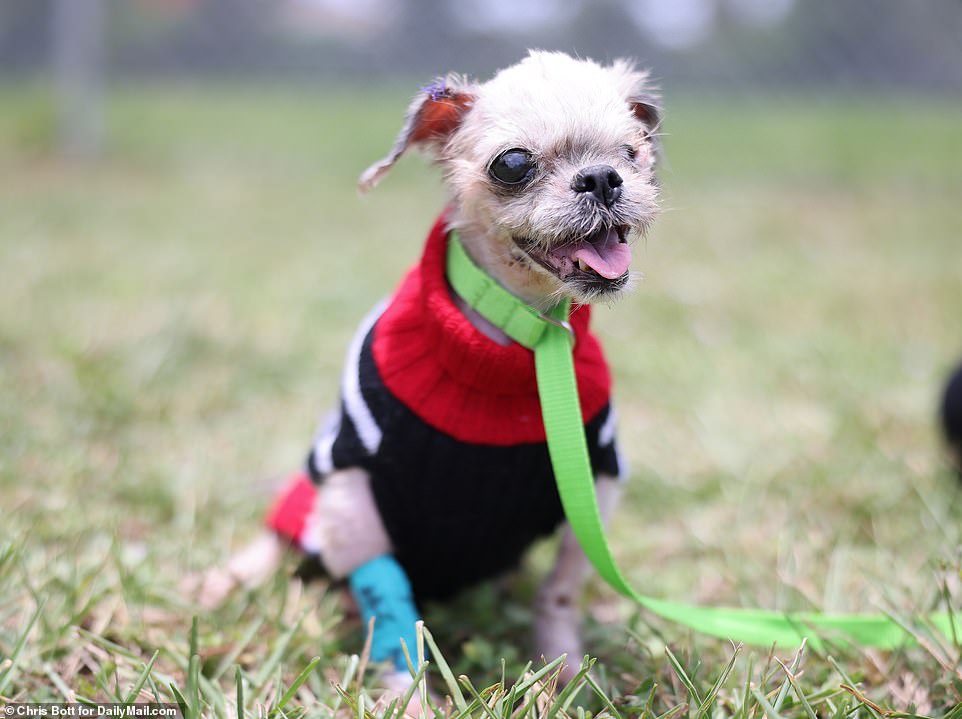 ‘When they can’t breed anymore they dump them like old garbage. We have given detectives every possible piece of information because we need to stop this abuse. It’s becoming more prevalent.’

While Parker’s recovery is likely to take months rather than weeks, the staff at Tri-County Animal Rescue are confident that someone will come forward when the time is right to adopt her and lavish her with love.

In the meantime they are posting updates on the shelter’s social media pages to keep Parker’s growing fan base up to date.

‘People are calling from all over the place. She’s getting cards filled with words of love, people are sending handmade blankets and bedding to keep her comfortable and outfits because she has no hair,’ Otero told DailyMail.com.

‘Her body needs time and her recovery is going to be long. But, eventually, I think she will find someone who accepts her and loves her completely for who she is.’

Detectives are asking the public to help identify the person who dumped Parker at Tri-County Animal Rescue, located at 21287 Boca Rio Road, Boca Raton, in the early hours of June 8.

Anyone with information should call Crime Stoppers on 1-800-458-TIPS or contact the Palm Beach County Sheriff’s Office anonymously though its mobile app.

To learn more about the Tri-County Animal Rescue or if you wish to leave a donation to help animals like Parker, visit the shelter’s website.

Autopsy on body found during search for animal trainer ‘inconclusive’