The Australian Border Force has rejected suggestions racism played a role in a decision to detain three Indian tourists in Perth for five days before cancelling their visas, a move that was later overturned in court.

ABF officers detained Polachan Vareed, Shibu Lonakunji and Shaju Kunjuvareed on September 1, believing they intended to work for their brother-in-law Biju Pallan while in Australia because they did not arrive with their wives as originally stated on their visa applications. 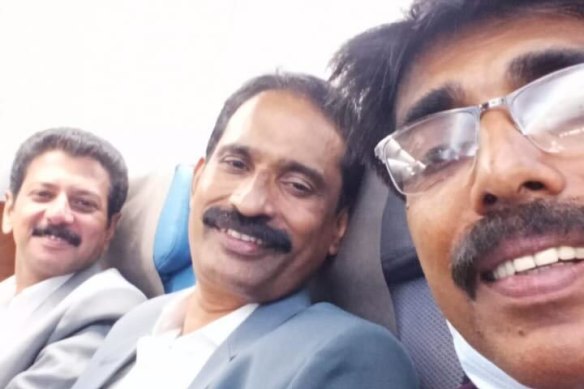 The men travelled to WA for a holy communion celebration for Pallan’s daughter and Pallan, who runs a building company in Perth, planned to take them around the state and to South Australia for a holiday.

The trio’s wives made a last-minute decision to remain in India, but the men were questioned for 12 hours at Perth Airport before being detained at a hotel.

Pallan said the treatment of his brothers-in-law and his own public grilling at the airport was a “horrible” experience that had soured his family’s impression of the country he has called home for 18 years.

“They asked if I have money for them to stay with me, I said, ‘Of course I have’, then they asked me in front of everyone to show them my bank account,” he said.

“We were very badly treated, the same questions kept repeating.

“I gave all the details to them … it was embarrassing.”

After his brothers-in-law were told their visas were cancelled, Pallan enlisted the help of Melbourne-based immigration lawyer Carina Ford, who represented the Murugappan family during their fight to remain in Australia.

Ford successfully lodged an injunction in Melbourne’s Federal Circuit Court to stop the men’s deportation and overturn their visa cancellation. The government was also forced to pay costs, which will likely result in a bill of tens of thousands of dollars.

In court, the ABF and immigration officers backed away from their decision to cancel the men’s visas, saying it was “affected by jurisdictional error”.

“The respondent concedes there was no evidence before the delegate that the information provided by the applicant, being who he intended to travel to Australia with, was incorrect at the time the application was lodged,” the September 6 court order read.

“I question whether it is stereotyping based on the colour of their skin because I don’t think that they would have applied this type of analysis to someone coming in from the UK or from Europe, who happens to be white-skinned,” he said.

“They accused these guys in the conversation of wanting to come here and take jobs; two of them are working in Kuwait and Dubai, they said they were comfortably employed back there and the third is employed back home in India.”

Rajan said the men’s treatment sent the opposite message from state and federal governments, who were trying to promote tourism post-COVID.

“The message that these guys have sent back to their families back home is, ‘Don’t ever come here’,” he said.

An ABF spokesman said it did not comment on individual cases due to privacy reasons but strongly denied any racism was involved.

“The ABF fundamentally rejects suggestions that racism played any part in this matter. Each case is decided on its individual merits according to law,” he said.

“Visa cancellation powers help to ensure the protection of the Australian community and the integrity of Australia’s borders and visa programs.

“Beyond that, Australia operates a global and non-discriminatory migration program.”

Through a translator, Shibu Lonakunji said his experience was something they never imagined would happen in Australia.

“We never expected this kind of treatment, we were treated as people who had broken the law and that is wrong,” he said.

“It will take us some time to get over those feelings of hurt.”