Washington: Former US president Donald Trump has given the strongest indication yet that he will run for the White House in 2024, telling a conservative radio host that he is “absolutely enthused” by the prospect.

The interview came hours after Trump launched a new website designed to allow him to communicate directly with his followers following his ban from Twitter and Facebook in the wake of the January 6 Capitol insurrection. 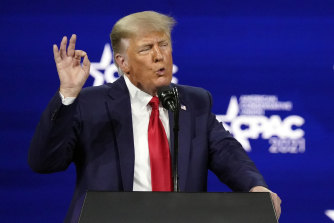 Trump has given his strongest hint yet he’s ready to run again. Credit:AP

“I think people are going to be very, very happy when I make a certain announcement,” Trump told conservative activist and radio host Candace Owens.

“The answer is I’m absolutely enthused. I look forward to doing an announcement at the right time.”

Trump said he was prohibited from announcing a presidential run too early because he would then be required to comply with campaign finance rules.

“Otherwise I think I’d give you an answer that you’d be very happy with,” Trump said. “So we’re looking at that very, very seriously.”

Even those closest to Trump are unsure if he plans to run for president again or if he is simply teasing the prospect to maintain his power in the Republican Party and media profile.

In a recent interview with Fox News, Trump said he was “very seriously” considering another run in 2024 but added the presidency had been “very traumatic” for him.

“I had a great life, great company, great business, no problems,” he said. “It’s vicious, it’s horrible, but you know what? I loved doing it because I helped people.”

Several polls taken since his departure from office shows that Trump remains the candidate of choice for a majority of Republican voters.

A February poll by Harvard’s Centre for American Political Studies showed that 52 percent of Republican voters wanted Trump to be the party’s 2024 nominee, ahead of former vice-president Mike Pence on 18 per cent support and former US ambassador to the United Nations Nikki Haley on 7 per cent.

Florida Governor Ron DeSantis has recently been gaining traction as a potential Republican nominee after the state’s coronavirus death toll remained relatively low despite his fierce opposition to mask mandates and restrictions on businesses.

Trump’s new website includes a page titled “From the Desk of Donald J Trump” that features a Twitter-style feed of brief statements. Social media users can then share these posts to their own Twitter or Facebook pages.

Facebook’s Oversight Board will announce on Thursday (AEDT) whether it will lift its suspension on Trump. Facebook chief executive said that following the storming of the Capitol on January 6, the risks of allowing Trump to continue posting on the platform were “simply too great”.

Homeowner films playful baby foxes in his Suffolk back garden