Almost 2million clinically vulnerable people are still shielding despite the official guidance ending a month ago, an official survey suggests.

The Office for National Statistics (ONS) questioned 2,000 people in England who were asked to self-isolate at home during nation’s third lockdown because of their underlying conditions.

Half were continuing to isolate by the start of this month, despite ministers saying that it was no longer necessary from April 1.

More than eight in ten were aware the advice had ended, and almost seven in ten had already received two doses of the Covid vaccine.

Ministers advised 3.7million people to self-isolate in January because of conditions including cancer, severe asthma and diabetes.

But the vulnerable were told they should start to follow national guidance last month amid the successful roll-out of the vaccine and tumbling infection rates. Official guidance says, however, they should still take ‘extra precautions’. 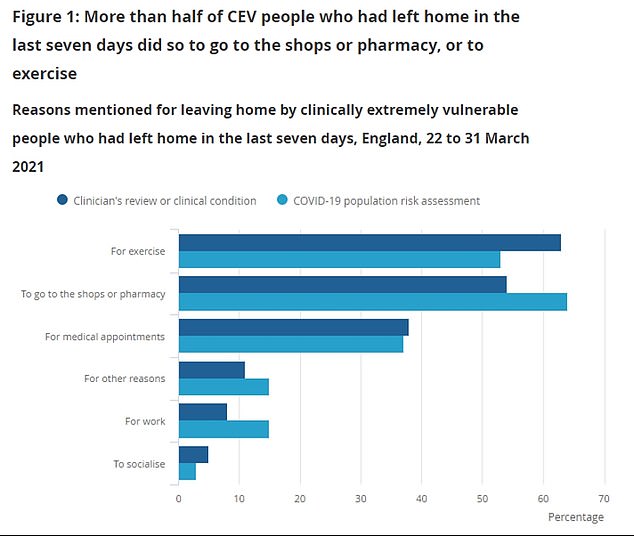 Office for National Statistics questioned 2,000 people in England for the study. They found that one in ten shielders had not left their home for the seven days before May 1 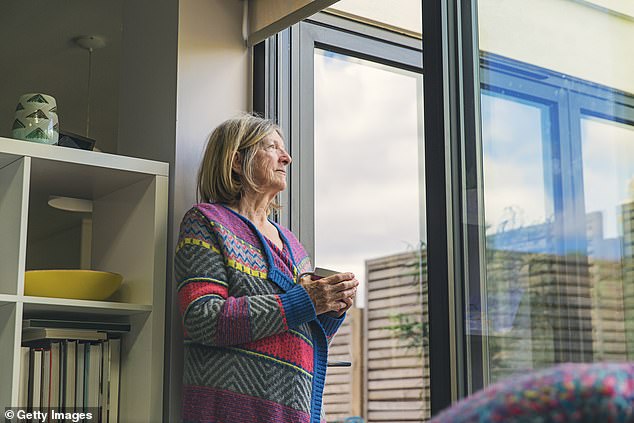 More than eight in ten shielders said they were aware the official guidance had ended, and almost seven in ten said they had received two doses of the Covid vaccine (stock image)

Extremely clinically vulnerable people in England were told they no longer needed to self-isolate from April 1.

But many have continued to do so amid the vaccine roll-out and tumbling infection rates nationwide.

Official guidance says although shielding advice was ‘paused’ those who are on the list should continue to take ‘extra precautions’.

For example, the national roadmap eased restrictions on people inviting family and friends into their homes from May 17.

But the vulnerable were told they should still ‘exercise caution’ when inviting others over.

As many as 3.7million Britons were told to self-isolate during the third lockdown because of conditions including cancer, severe asthma and diabetes.

The ONS’ head of public service analysis, Tim Gibbs, said it was ‘critical’ to keep an eye on how easing lockdown restrictions was affecting the vulnerable.

‘However it’s critical that we continue to monitor the impact of these changes on groups such as the clinically extremely vulnerable.’

Despite half of shielders saying they were isolating at home, the results suggested not all were completely following the previous guidance.

Nine in ten had left their home in the seven days to May 1.

The most common reason was to visit a shop or pharmacy (71 per cent). A further 20 per cent said they left home to socialise and for work reasons.

Around half left home for exercise (56 per cent), and for medical reasons (43 per cent).

Ministers ended shielding advice for the vulnerable on April 1.

But they said those on the list were still encouraged to ‘exercise caution’ while following national easings.

Boris Johnson’s roadmap saw restrictions on people inviting friends and family members into their homes relaxed in England on Monday.

But shielders were told it was a ‘personal choice’ whether they wanted to take advantage of the further freedoms.

‘From May 17, close contact with friends and family will be a personal choice, but you are encouraged to exercise caution,’ the advice says.

Health officials initially had 2.2million shielders on the list brought in during the first lockdown, who were asked to take extra precautions.

A further 1.5million were added in February after GPs carried out risk assessments of their patients to identify those that may be at heightened risk from the virus.

Shielders have been asked to stay home as much as possible to avoid catching the virus, and only leave their homes when it is absolutely necessary.

Those who live alone have been allowed to form a support bubble with one other household.

Reams of studies have shown that those who are over-75 or suffer from an underlying health condition are more likely to be hospitalised or die if they catch Covid.

The groups have been prioritised in Britain’s vaccine roll-out, which has aimed to inoculate the most vulnerable against the virus first.

Latest figures show 37.2million Britons have already received at least one dose of the Covid vaccine.