An unruly passenger stormed the cockpit of an American Airlines jet at an airport in Honduras, damaged the plane as it was boarding for a flight to Miami and attempted to climb out of the front window before being arrested.

The airline said in a statement on Tuesday that crew members intervened and the man, identified by the local news outlet LaPrensa.hn as Aaron Christopher Ebanks Fuentes, was arrested by local authorities. There were no reports of injury.

Flight 488 was boarding at Ramon Villeda Morales International Airport in San Pedro Sula on Tuesday afternoon when the suspect ran into the open cockpit, damaged flight controls and attempted to jump out of an open window as pilots tried to stop him, according to the airline. 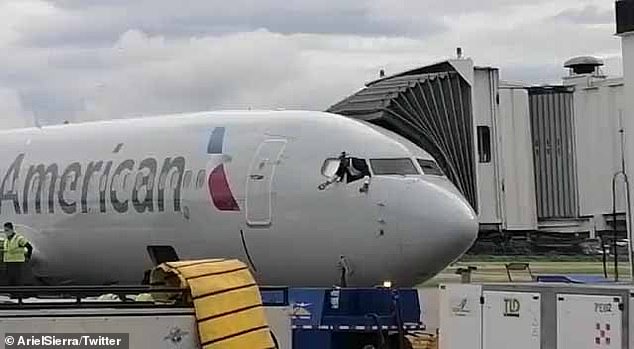 Video from San Pedro Sula, Honduras, shows an unruly passenger aboard American Airlines Flight 488 to Miami trying to jump out a plane window after storming the cockpit Tuesday 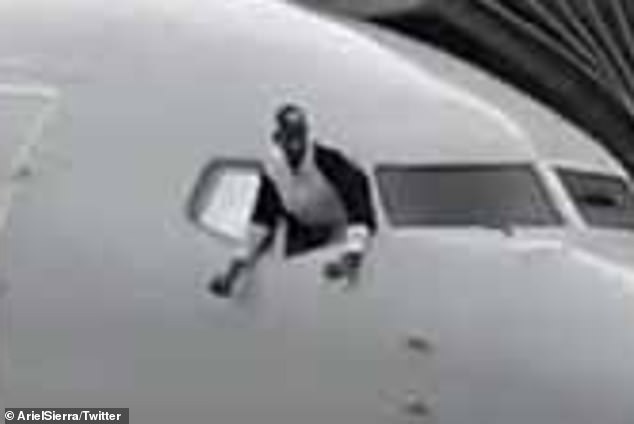 The man, identified as Aaron Christopher Ebanks Fuentes, was said to have become agitated after being asked to put away his bags and charged into the open cockpit before takeoff 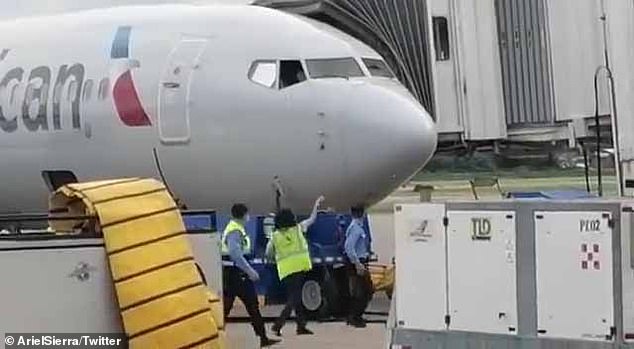 Crew members intervened and pulled Fuentes out of the cockpit, but not before he damaged flight controls, rendering the plane unfit to fly

The man had become agitated after being directed by crew members to put away his luggage, witnesses told LaPresna.

Cellphone video recorded on the tarmac and later shared on Twitter shows Fuentes, dressed in a black-and-white hooded sweatshirt and a baseball cap, leaning out the cockpit window.

After a few seconds, he retreats, or is pulled by someone, back inside the plane.

Fuentes was later photographed sitting in a wheelchair with his shoes off. LaPrensa reported that he was taken to a police station in La Lima to await charges.

‘We applaud our outstanding crew members for their professionalism in handling a difficult situation,’ American Airlines said in its statement.

The damaged aircraft, a Boeing 737-800 carrying 121 passengers and six crew members, was grounded at the airport.

The flight was originally scheduled to depart just before 3pm local time, but because of the damage inflicted by the passenger, a replacement plane had to be sent to Honduras, causing an eight-hour delay.

The new plane did not take off until 11pm, landing in Miami just before 2am local time.

Texas nurse describes ‘The Pit,’ a room where COVID-19 patients are sent to die

End of the Wild: Museum’s long-running taxidermy exhibition to close