Angela Rayner’s barb to the Labour leader after lacklustre performance at PMQs: ‘Put some more welly into it, Sir Keir!’

Mrs Rayner said the Labour leader’s long career as a lawyer often led him to ‘take the emotion out’.

The intervention by the party’s deputy leader comes amid Labour dismay at Sir Keir’s leaden performance at Prime Minister’s Questions this week, when even allies admit he ‘missed an open goal’ to attack Boris Johnson over his no-confidence vote.

In an interview with the BBC’s Newscast show, Mrs Rayner hinted at her frustration, saying that although the Labour leader ‘doesn’t care any less’ about people’s lives, he sometimes struggled to put it across. 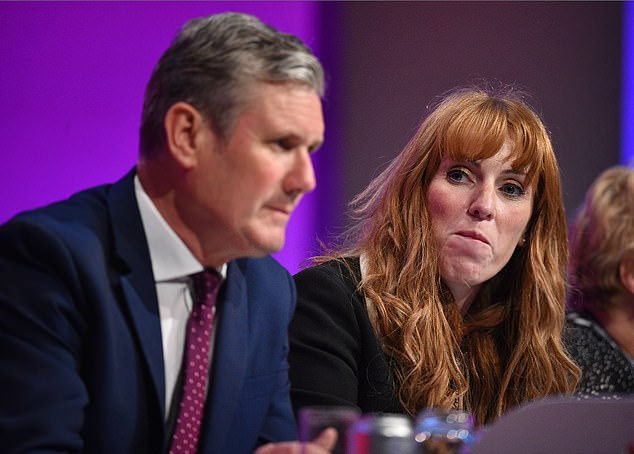 She said that away from the cameras Sir Keir was ‘such a funny character and a nice guy’ who ‘wants to do the right thing’.

But she added: ‘I do think some of his conditioning when he was a lawyer and things like that, sometimes he takes the emotion out of it and he puts the strategic stuff in.

And I think: “No, put some more welly into it!”’ Mrs Rayner went on: ‘I’ll go in with two boots – you know what I mean? Whereas Keir is a bit more sort of: “I’ll go in with the strategic case and the detail”.

‘He cross-examines in a very forensic way, which I think some people prefer… Other people think I’m too brash.’

Mrs Rayner insisted Sir Keir had put in a ‘good performance’ at PMQs this week, but admitted she would have been more robust in the wake of a confidence vote which saw 148 Tory MPs vote against Mr Johnson.

Sir Keir and Mrs Rayner have long had a fractious working relationship, with him having sacked her as Labour Party chairman last May.

Following an outcry from the Left of the party, he was forced to hand her a beefed-up brief. Allies of the Labour leader accused Mrs Rayner of ‘disloyalty’ after she reportedly canvassed support for a potential leadership challenge if the party lost the Batley and Spen by-election in July 2021.

By December his advisers were accused of considering a ‘brutal’ plot to squeeze her out by abolishing her directly elected position as deputy leader.

Mets pitcher Max Scherzer dishes on PitchCom technology: ‘It should be illegal’

Who is Brian Coulter?