Shocking new details from Brad Pitt and Angelina Jolie’s infamous Sept. 14, 2016 plane fight — after which she filed for divorce — have emerged from an FBI report.

Various media outlets have obtained the 53-page report, which has not been officially released, detailing what Jolie allegedly said when being interviewed by agents one month after the incident. The Bullet Train actor was never charged with any crime following an investigation by the FBI and the Los Angeles County Department of Children and Family Services, but Jolie alleged there were physical and verbal assaults with their six children — Maddox, now 21, Pax, 18, Zahara, 17, Shiloh, 16, and twins Vivienne and Knox, 14 —present. She also claimed Pitt accused her of “f**king up the family,” said one of their children “looks like a f***ing Columbine kid” and caused $25,000 in damage to the private plane.

According to NBC News andEntertainment Tonight, the Unbroken director told the FBI that Pitt “was mad” about her parenting during the flight, which originated in Nice, France, (near the couple’s Chateau Miraval estate) and ended in Burbank, Calif., with a stop at Minnesota’s International Falls Airport to refuel.

When she asked what was wrong, he allegedly replied: “That kid looks like a f***ing Columbine kid,” referring to the gunmen in the 1999 high school shooting, and “[redacted is] gonna kill someone, will you be happy then?” She said he also told her, “You don’t know what you’re doing” when it came to raising their children. 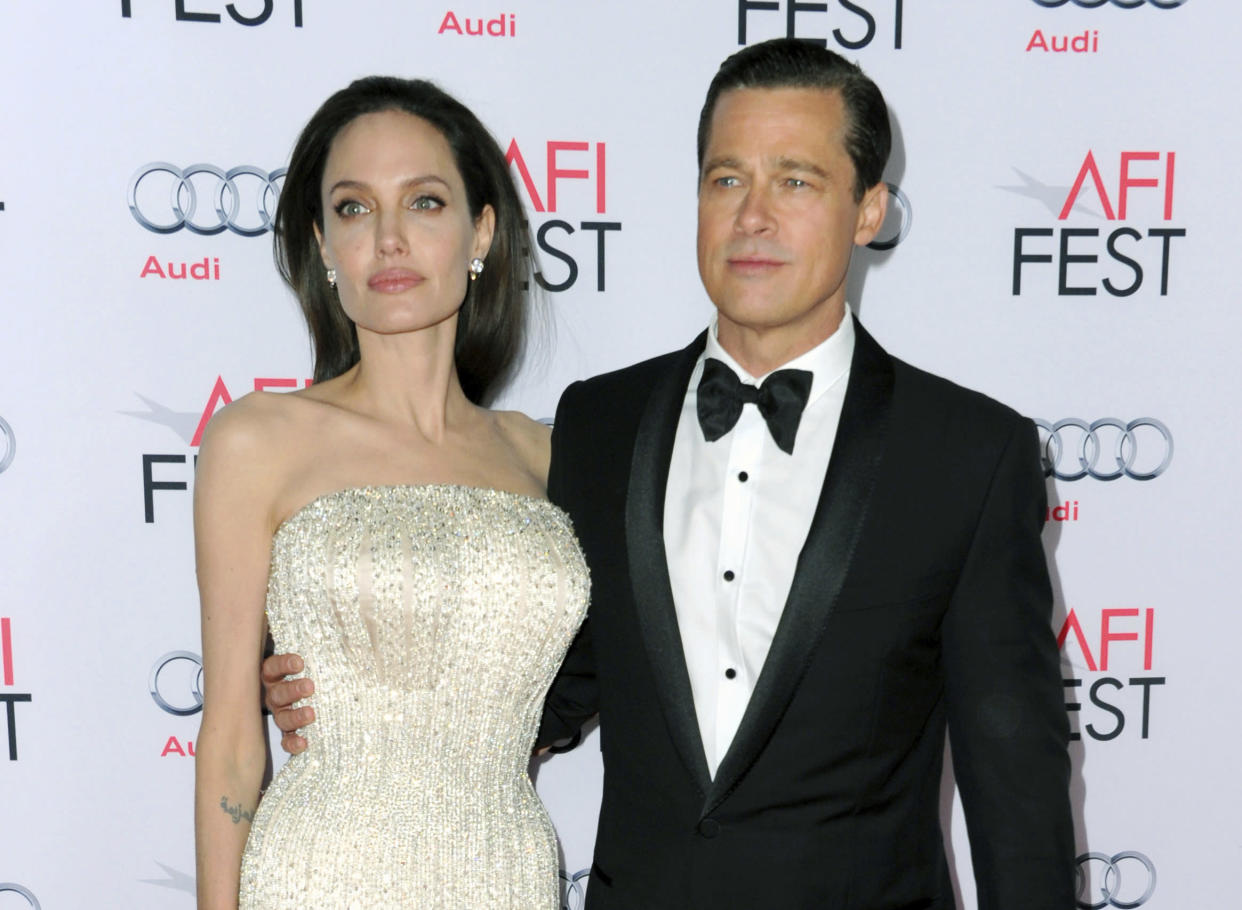 They moved the dispute to the back of the plane, so the children — three of whom they adopted — wouldn’t hear. She claimed he then “grabbed her by the head, shaking her, followed by grabbing her at the shoulders and shaking her.” Eventually in the bathroom together, the fighting continued and he punched “the ceiling of the plane approximately four times.”

Exiting the bathroom, Jolie claimed one of the children asked, “Are you OK mommy?” Pitt allegedly replied, “No mommy’s not OK. She’s ruining this family. She’s crazy.” At that point, someone else on the plane said to Pitt, “It’s not her, it’s you, you prick,” with the assumption that it was oldest Maddox as reporting at the time stated that he “stepped in to defend Angie and got in Brad’s face.” Pitt allegedly approached the child “like he was going to attack,” Jolie claimed, but she said she intervened, grabbing Pitt around the neck “in a choke hold.”

At that point is when Pitt allegedly threw himself back and Jolie was pushed into plane seats, resulting in injuries to her back, elbow and hand, she said. The report included pictures of injuries.

Pitt allegedly spilled wine onto a plane chair, causing $25,000 damage, and also “poured beer on [Jolie] and the blanket she was under” as she sat comforting the children. Every 30 minutes, Pitt paced in the plane, ranting and yelling, she said. While she claimed he was getting drunk during the incident, he was still aware and not rambling. She claimed she’d seen him drink a lot more — including a whole bottle of vodka — and still function. (Pitt got sober, and has remained that way, since his split from Jolie.)

When the plane stopped to refuel, Jolie apparently looked into getting separate transportation for her and the kids to a hotel and then continue to California the next day to diffuse the situation. Jolie claimed Pitt screamed about it, saying, “You’re not f***ing going anywhere. You’re not getting off this f***ing plane. F*** you all. I’m f***ing leaving you.”

After refueling, they continued on for the second leg, Pitt started ranting again, claiming he said things like, “You broke up your family.” Jolie said she started to feel like a “hostage.”

Pitt eventually passed out and Jolie made plans for a second car to pick up her and the children in L.A. and take them to a hotel, she said. She claimed Pitt exploded when he woke up and learned this, allegedly saying, “You’re not taking my f***ing kids.” She claimed he pushed her twice and wouldn’t let them get off the plane for 20 minutes. After they got off the plane, Jolie claims he grabbed her arm, then grabbed her “by the head and the shoulders and shook her.” Someone, presumably one of the children, intervened saying, “Don’t hurt her,” and then an additional unidentified person “saw what was happening and intervened” as well.

At the time this played out, it was reported that someone anonymously called the Department of Children and Family Services during the flight and when they landed in Burbank, representatives were at the airport tarmac to take the complaint. Since the episode occurred in the air on an international flight, the case ultimately was turned over to the FBI. Jolie filed for divorce days after.

In Nov. 2016, the FBI cleared Pitt over the abuse claims. Pitt sources denied that he hurt his son, calling the whole thing “a combination of exaggerations and lies.” He recently spoke about getting sober after the Jolie split, saying, “I had taken things as far as I could take it, so I removed my drinking privilege.”

According to NBC News, the FBI report of the incident was shared with both Pitt and Jolie in 2017 but it was not made public — and it’s still not. In March of this year, a Freedom of Information Act lawsuit was filed against the FBI by a “Jane Doe” seeking the release of the FBI documents. The lawsuit claimed Doe, “her then-husband, and their children, who were all minors at the time, were traveling via private aircraft [when the] husband allegedly physically and verbally assaulted plaintiff and the children, who have ‘experienced lasting physical and mental trauma as a result of the assault.'” The attorney for Doe, said she wouldn’t reveal the identity of her client, but said she was “seeking such records for years but has been stonewalled and has had to resort to court action to receive needed records.”

This week, multiple outlets including Variety reported that Jolie is the Jane Doe.

While a rep for Pitt has not responded to request for comment, a Pitt source reiterated to People magazine that both Pitt and Jolie have had the FBI documents in question for six years and questioned why she’s reviving “an issue that was painful for everybody and was resolved six years ago.”

“They investigated it. They prepared materials, reviewed it together and decided not to charge him,” the source said. “What are the motivations of a person to take up court time and public resources in filing an anonymous FOIA request for material they have had for years? There’s only one: to inflict the most amount of pain on her ex. There is no benefit to this. It is harmful to the children and the entire family for this to be made public.”

Jolie has not directly commented on the matter, but we will update this story if she does.

The couple known as “Brangelina” was declared legally single in 2019 amid a contentious divorce. While she initially had full custody and Pitt was granted supervised visits, Pitt was given joint custody alongside his ex-wife in 2021. The battle between the exes has also extended to their former business partnerships, with Pitt suing Jolie earlier this year after she sold her interest in their French winery.