The Royal College of Pathologists has written to Health Secretary Matt Hancock to call for tighter regulations over the have-you-had-it tests.

Officials have yet to approve any at-home antibody test for use, despite promising such kits were days away from being validated back in March.

Only NHS workers and care staff, as well as some patients in hospital and care home residents, can get their blood checked for signs of past infection.

Several different DIY antibody tests were available before regulators clamped down on the kits in May over fears finger-prick blood may not be as accurate.

But Professor Jo Martin, of the RCP, said that they were ‘concerned’ such devices, intended solely for professional use, were being offered for sale.

She warned antibody tests were being offered to consumers ‘without the required reassurance of appropriate laboratory or professional back up’.

Professor Martin said: ‘The use of these for unsupervised self use test falls outside current regulations, and can mislead the public and put individuals at risk.

‘We want everyone to be assured about the tests they receive in healthcare, or that they purchase.

‘We want to make sure that not only are they are of good quality, but they give the right result and the result is properly readable – they are appropriately ”useable”.’ 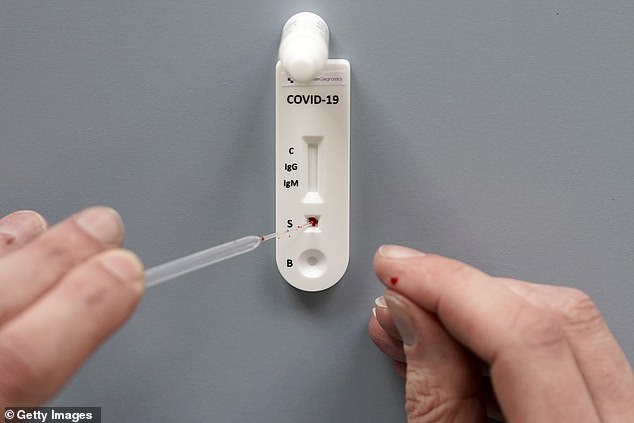 A senior health body has warned the Government about the risks associated with the selling Covid-19 antibody testing devices directly to the public. Pictured is a worker demonstrating the use of a coronavirus 10-minute blood test

Antibody tests have been a controversial subject for months after the Government first pledged them to the public in March but rowed back on its decision.

Many tests turned out to be inaccurate and even if results are accurate, scientists still aren’t sure how to interpret them because people may not develop immunity.

The tests work by screening a small blood sample to look for antibodies – disease-fighting substances made by the immune system that are specific to one illness.

If Covid-specific antibodies are present in someone’s blood, it means they have been infected with the virus in the past and fought it off.

WHAT IS AN ANTIBODY TEST AND WHAT IS IT USED FOR?

Antibody tests are ones which look for signs of past infection in someone’s blood.

Antibodies are substances produced by the immune system which store memories of how to fight off a specific virus. They can only be created if the body is exposed to the virus by getting infected for real, or through a vaccine or other type of specialist immune therapy.

Generally speaking, antibodies produce immunity to a virus because they are redeployed if it enters the body for a second time, defeating the bug faster than it can take hold and cause an illness.

An antibody test, which involves analysis of someone’s blood sample, has two purposes: to reveal whether an individual has been infected in the past and may therefore be protected against the virus, and to count those people.

Knowing you are immune to a virus – although whether people actually develop immunity to Covid-19 is still unknown – can affect how you act in the future. Someone may need to protect themselves less if they know they have been infected, for example, or medical staff may be able to return to work in the knowledge they are not at risk.

Counting the numbers of people who have antibodies is the most accurate way of calculating how many people in a population have had the virus already.

This can be done on a small sample of the population and the figures scaled up to give a picture of the country as a whole.

In turn, this can inform scientists and politicians how devastating a second outbreak might be, and how close the country is to herd immunity – a situation in which so many people have had the virus already that it would not be able to spread quickly a second time.

Experts believe that around 60 per cent exposure would be required for herd immunity from Covid-19, but the UK does not appear to be anywhere close to that.

Early estimates suggest 17 per cent of Londoners have had the virus, along with five per cent of the rest of the country – about 4.83million people.

This means the virus might spread slightly slower in future but the risk of second outbreak and hundreds or thousands more deaths remains very real.

Several sellers have stopped selling their at-home antibody tests following the Government’s decision to clamp down on them in May.

Babylon Health, who manufactured an at-home test, announced on their website that all testing would be paused after the government asked that all Covid-19 antibody testing from finger-prick blood samples be paused.

The website goes on to outline that the government wants to ensure that blood taken from a home finger-prick sample shows the same levels of accuracy as a sample taken in a clinic.

It was sparked after Superdrug announced it was going to sell tests for £89 after its testing service was shut down by regulators in May.

The retailer changed its service to take blood from veins instead of relying on finger-pricks, which officials say isn’t proven to be accurate.

The tests, which cost £89 each, use kits developed by the company Abbott, which supplies the most accurate antibody test currently used by the Government.

Twenty-eight Superdrug clinics around the UK have nurses trained to draw blood so it can be analysed to look for signs of past Covid-19 infection. But the retailer is now selling the kits as a walk-in service and customers must register online first.

Antibody tests are currently a ‘class one’ medical device – meaning that companies are allowed to self-certify their tests as effective and immediately put them on the market.

However, tests for HIV and pregnancy are classed as ‘annex two’ on the European directive for medical devices – meaning that companies have to provide certified information about the efficacy of their tests.

Jon Deeks, a professor of biostatistics at the University of Birmingham, told the BBC: ‘These regulations aren’t fit for purpose and don’t protect the public from bad tests.

‘If you can get a CE mark [indicating compliance with the relevant legislation] for a bad test as there is no scrutiny on whether it works, it is just a marketing claim that is registered and we are left in a Wild West of antibody testing.

‘For drug licensing the onus is on the companies to go through clinical trials. We need that same obligation to apply for testing devices like the Covid antibody tests as well.’

He added that evaluations of tests should be added to pre-registers for clinical trials in order to stop manufacturers from reporting on only the most favourable results.

A Department of Health and Social Care official said action is being taken to enforce tough regulations on at-home antibody tests.

The spokesman – who insisted that antibody testing was an ‘important part of our strategy’ – added that some 47,000 tests have been seized.

And they added: ‘We do not yet know whether antibodies indicate immunity from reinfection with coronavirus or if they prevent transmission.’

Tests made by pharmaceutical heavyweights Roche and Abbott are currently being used to map the outbreak among the population.

BBC’s Newsnight reported an analysis of 41 antibodies tests sold to the public in Britain showed almost a third had inaccurate and incomplete information.

It comes after researchers found that large numbers of people who suffered from coronavirus could be being wrongly diagnosed as Covid free.

The Oxford University study of more than 9,000 healthcare workers found that significant numbers of people had received negative test results despite being likely to have already contracted Covid-19.

ANTIBODY TESTING IN THE UK: A TIMELINE

March 19: Boris Johnson promised to get antibody tests ‘as simple as a pregnancy test’ available for people to use at home.

March 25: Public Health England’s Sharon Peacock said the UK had bought 3.5million antibody tests and was evaluating them with a view to getting them available ‘within days’.

March 30: British testing companies including BioSure and SureScreen said they had been approached by the Government and told their services might be needed, but heard nothing more.

April: At the start of April the Department of Health said PHE already had 800 blood samples to test for antibodies.

April 2: Health Secretary Matt Hancock claimed the antibody test being used on those samples at Porton Down was ‘ultra-high accuracy’ but data has never been released to back this up.

April 3: Universities and private labs caused uproar when they revealed the Government had turned down their offers to help with swab testing, to check who had the disease currently.

April 5: Professor Sir John Bell, at the University of Oxford, published a blog titled ‘Trouble in testing land’, revealing that no tests he had seen so far were any good. He said it would take at least a month to make one.

April 8: Professor Bell accused PHE of being unhelpful and not providing enough blood samples to analyse tests with, in leaked emails seen by The Telegraph.

April 16: The New York Times reported that Britain had spent £16.5million on antibody tests that it no longer wanted to use.

April 18: PHE’s Professor John Newton warned people not to try to buy or use antibody tests not approved by the Government, saying ‘they may put you, your family, or others at risk’.

April 20: Professor Derrick Crook, from John Radcliffe Hospital in Oxford, published a study showing none of the antibody tests bought by the Government were good enough to use.

May 1: Mologic, a British company given £1million by the Government in March, reveals the early results of its antibody test. It is 98 per cent specific and 96 per cent sensitive – below the MHRA’s standard of 98/98.

May 14: The approval of Roche’s antibody test by PHE goes public, with claims it is a ‘game changer’ and 100 per cent accurate.

May 15: The approval of Abbott’s coronavirus test is revealed in the Daily Mail, with more claims of near-perfect accuracy and reports of millions being bought by Britain straight away.

May 21: Matt Hancock announces on TV the early results of antibody surveys being done in the UK. He said they suggest 17 per cent of people in London have had the disease, along with five per cent elsewhere in the country.

May 28: Office for National Statistics publishes its first antibody testing data. It found 60 positive results in a pool of 885 samples in England, suggesting a national infection rate of 6.78 per cent (3.7million people).

May 29: PHE published evaluation of a third antibody test, made by Ortho Clinical Diagnostics, to no fanfare. It was found to be 77.4 per cent sensitive and 99.7 per cent specific.

June 4: PHE publishes most comprehensive antibody survey to date, from almost 8,000 blood test results, suggesting 8.5 per cent of the population has already had Covid-19.