Strong storms pounded the Deep South on Sunday, killing at least six people in south Mississippi and damaging up to 300 homes and other buildings in northern Louisiana.

Mississippi Emergency Management Agency director Greg Michel said one person killed was in Walthall County, two were killed in Lawrence County and three were killed in Jefferson Davis County. All three counties are more than an hour’s drive south of Jackson, near the Louisiana state line.

It was part of a swathe of dangerous weather including tornadoes and thunderstorms moving across the south of the country.

The National Weather Service said strong winds were sweeping through other parts of Mississippi, and a tornado was spotted north of Meridian near the Alabama state line.

Strong to severe thunderstorms have been moving eastwards through the lower Mississippi Valley throughout Sunday with tornadoes recorded to have touched down in Texas and Louisiana over the weekend. 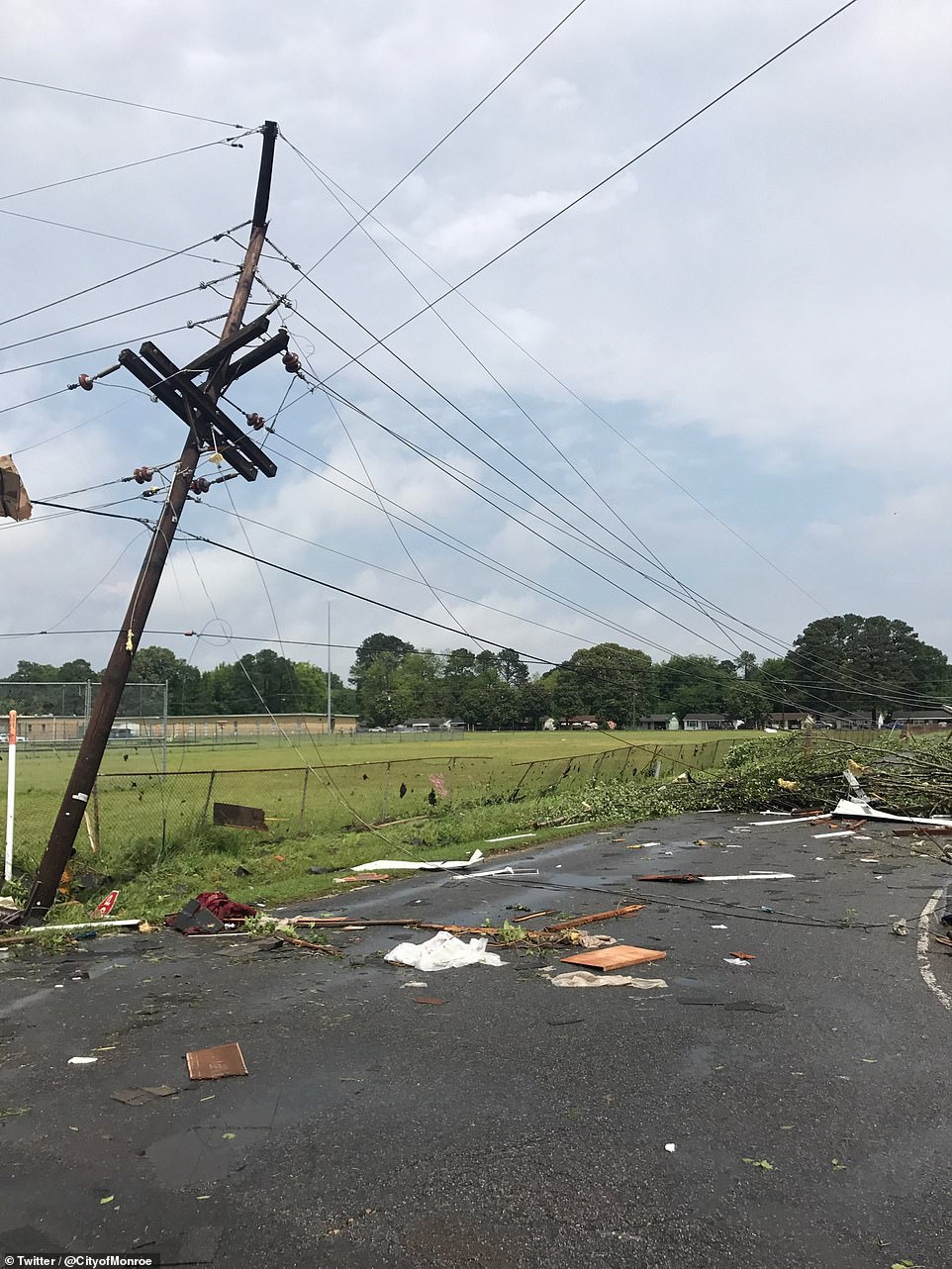 About 300 homes were damaged or destroyed in Monroe, Louisiana after a tornado swept through the area on Sunday 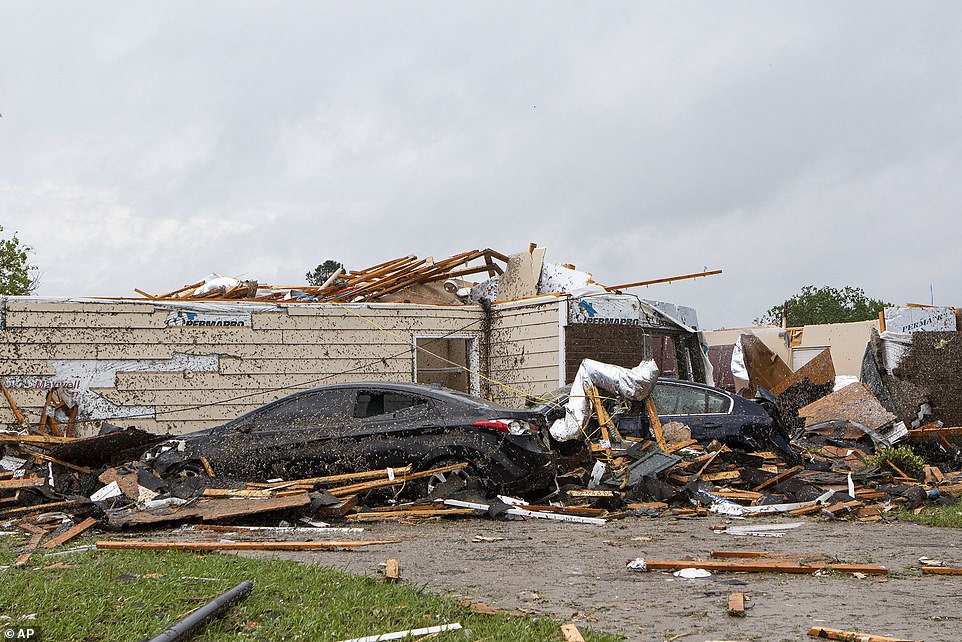 A home had its roof torn off after a tornado ripped through Monroe, Louisiana just before noon on Sunday 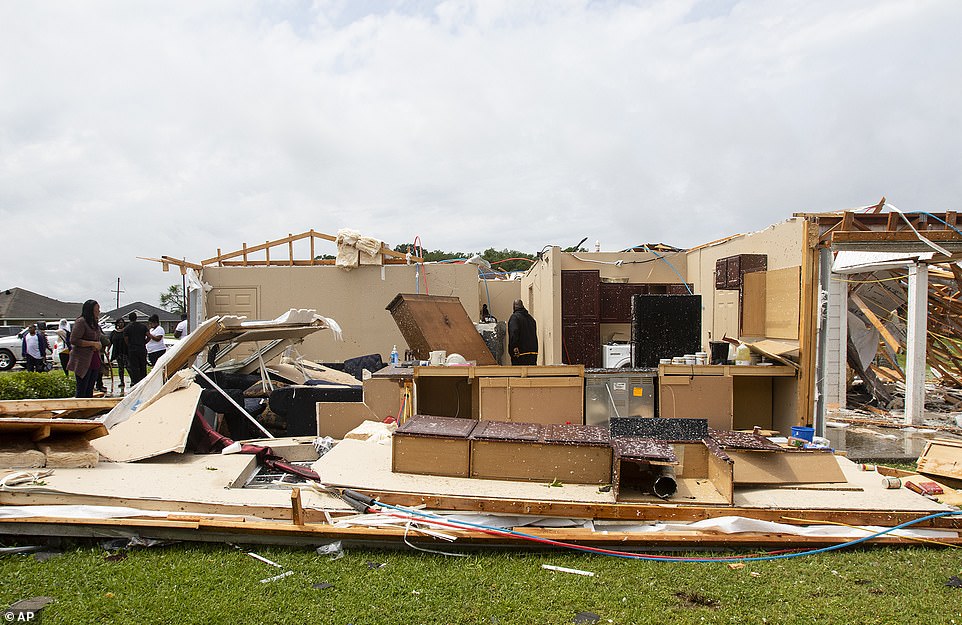 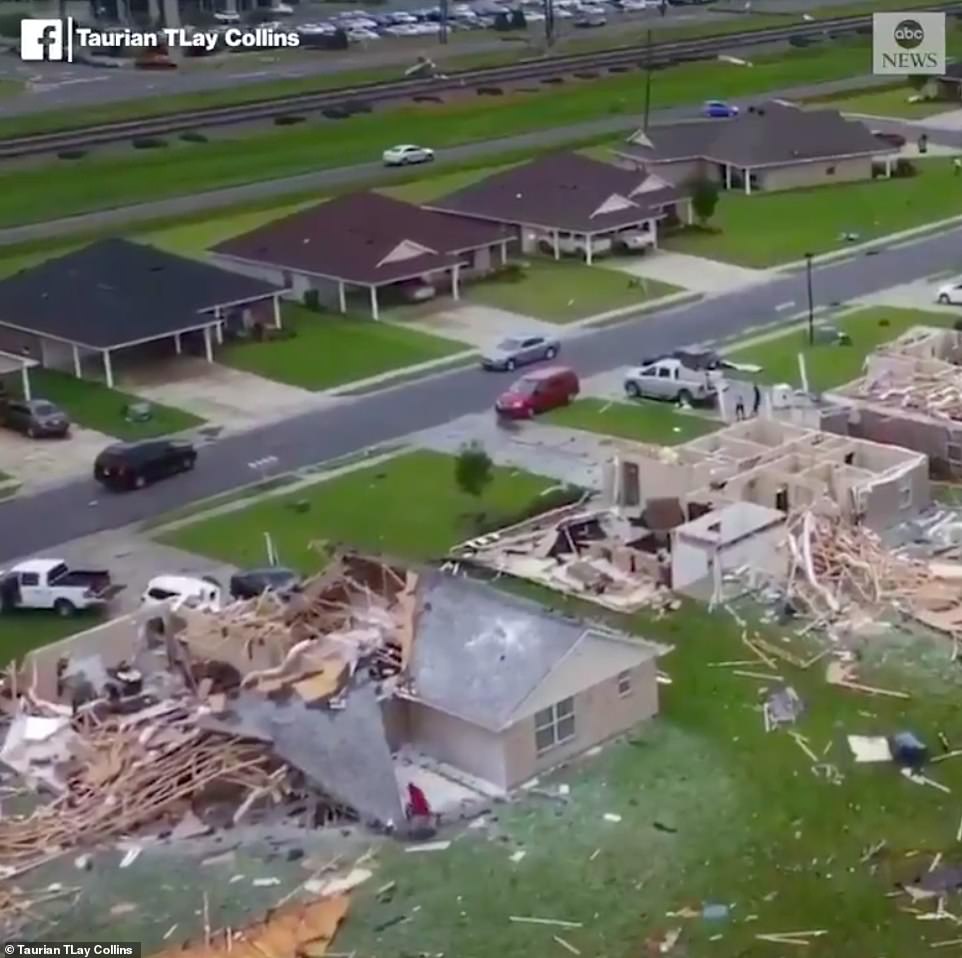 Strong storms pounded parts Louisiana on Sunday, damaging 200-300 homes, according to the mayor of Monroe 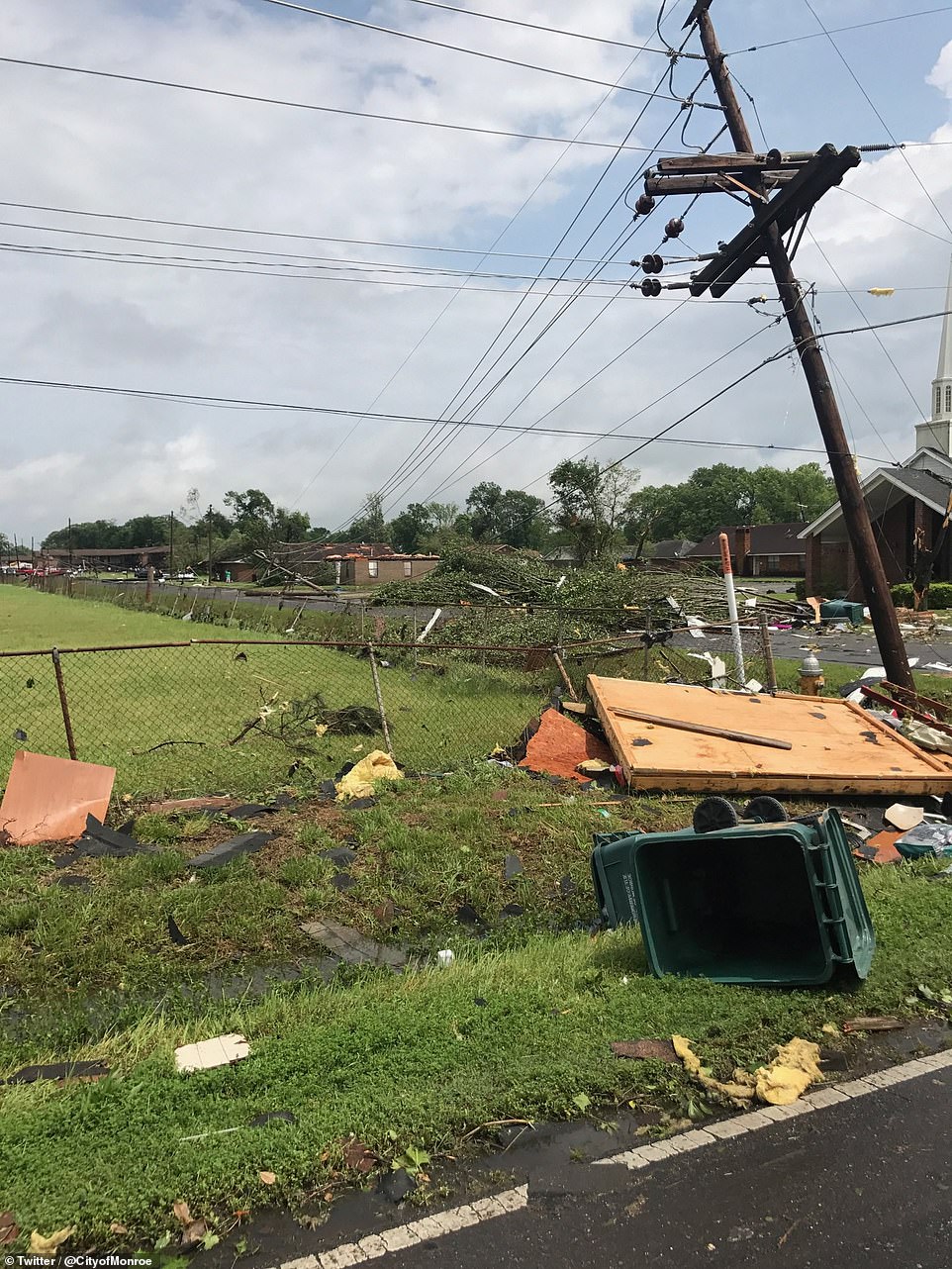 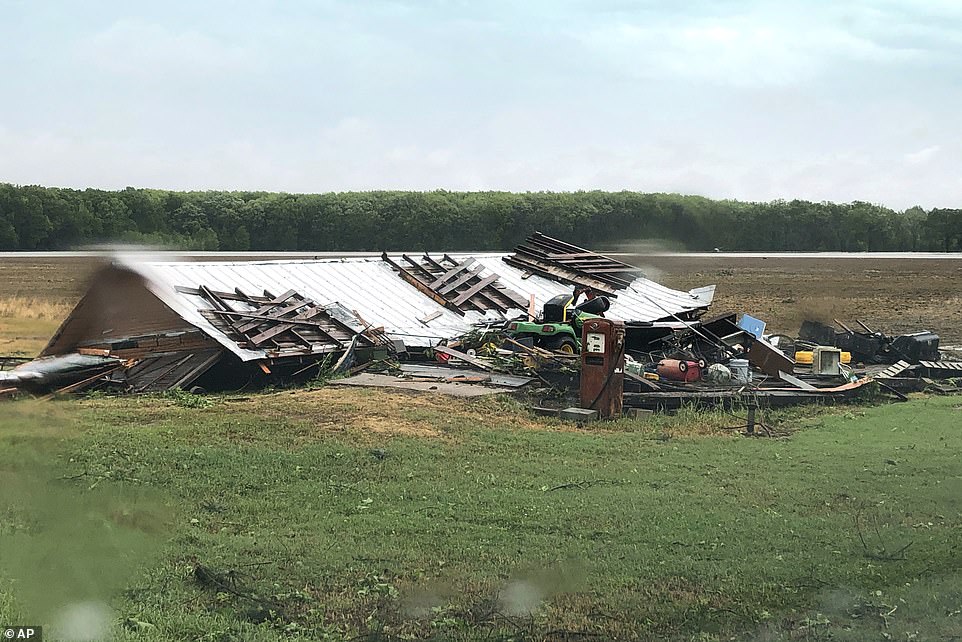 Strong storms pounded parts of the Deep South, including this house and shed in Yazoo County, Mississippi 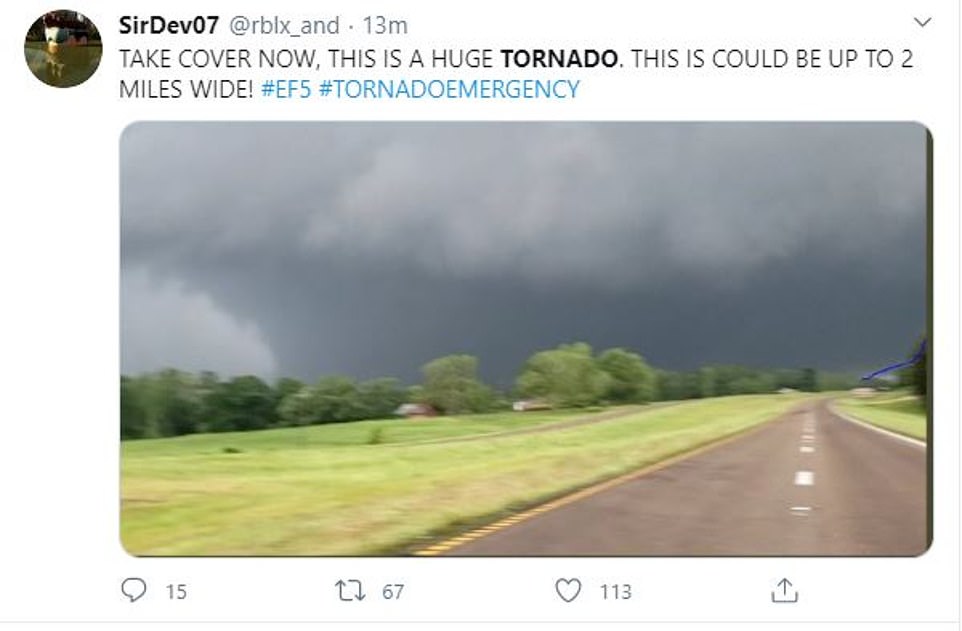 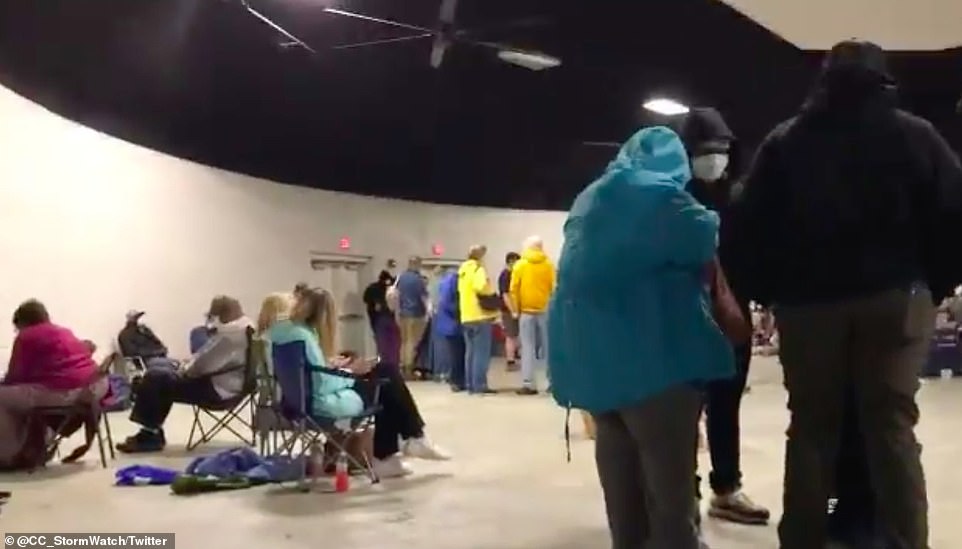 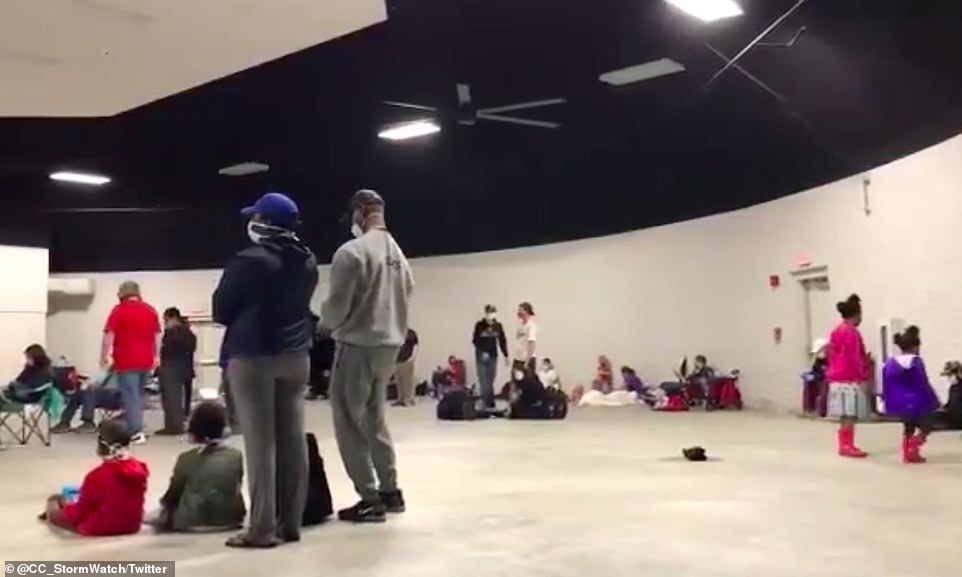 Residents of Starkville, Mississippi gathered in a storm shelter as storms passed overhead . Many were wearing face masks 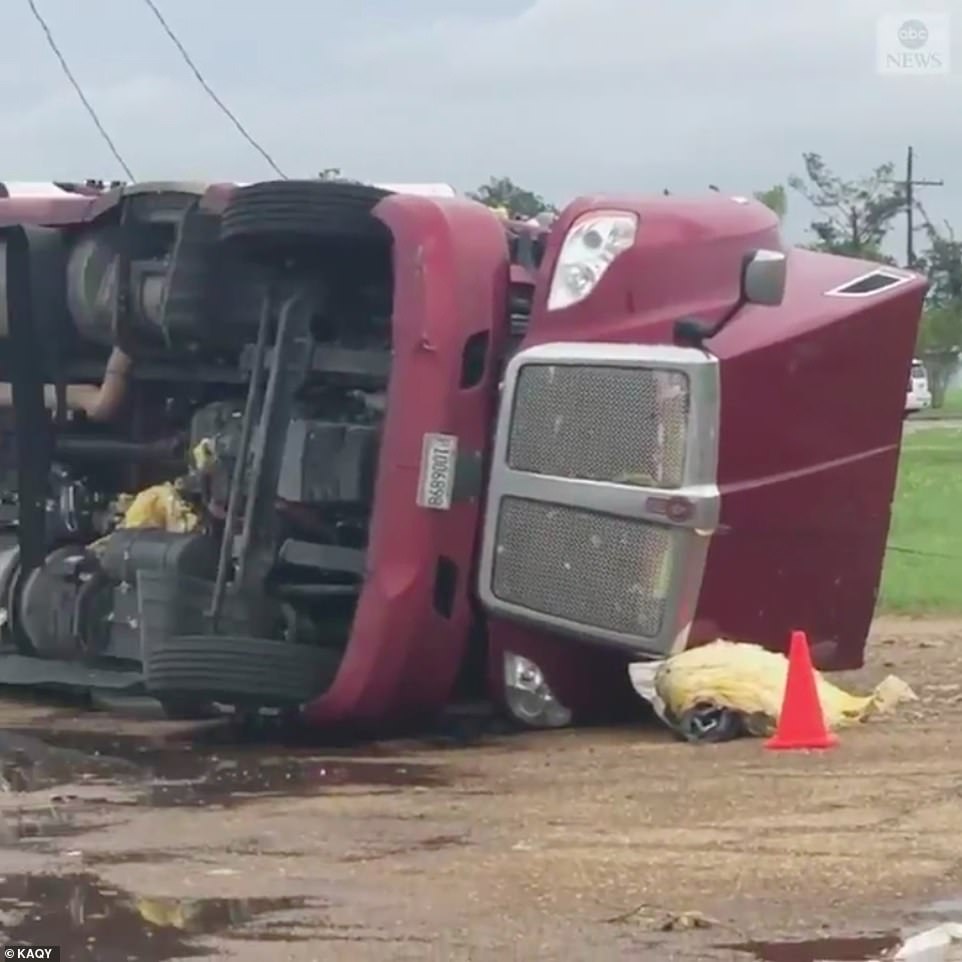 The storms were strong enough to topple this eighteen-wheeler in Monroe, Louisiana

The National Weather Service reported multiple tornadoes and damaging winds over much of the northern part of the state. Utility companies reported thousands of power outages.

The city of Monroe, Louisiana, said the storm damaged commercial buildings and homes in multiple neighborhoods.

The mayor of Monroe, Jamie Mayo, told KNOE-TV that the storm damaged 200-300 homes in and around the city.

‘The images and reports of major tornado damage in the Monroe area are heartbreaking and my prayers are with the people there. We are in contact with local officials in the area to provide support,’ Gov. John Bel Edwards said on Twitter. ‘I hope all of Louisiana is on high alert right now.’

Flights were canceled at Monroe Regional Airport, where siding was ripped off buildings and debris was scattered on runways. Airport director Ron Phillips told the News-Star the storm caused up to $30 million in damage to planes inside a hangar.

In northwest Louisiana, officials reported damage to dozens of homes in DeSoto and Webster parishes.

In northwest Louisiana, officials reported damage to dozens of homes in DeSoto and Webster parishes, according to news outlets.

The weather service had said the greatest risk for strong Easter Sunday storms covered much of Mississippi, Alabama and western Georgia. That area was at ‘moderate risk’ while much of the rest of the South was under at least a ‘marginal’ risk, the weather service said.

‘Director Michel and our team are monitoring the weather and standby ready to assist. Have a safe place to go. If you go to a public shelter please wear a mask, bandana, or scarf around your nose and mouth. Practice social distancing. We will get through this!’

Un Louisiana, the storms come as the state remains one of the hardest-hit by the coronavirus pandemic, with more than 20,000 cases including more than 800 deaths as on Sunday. Texas currently has 12,561 reported cases including 254 deaths. 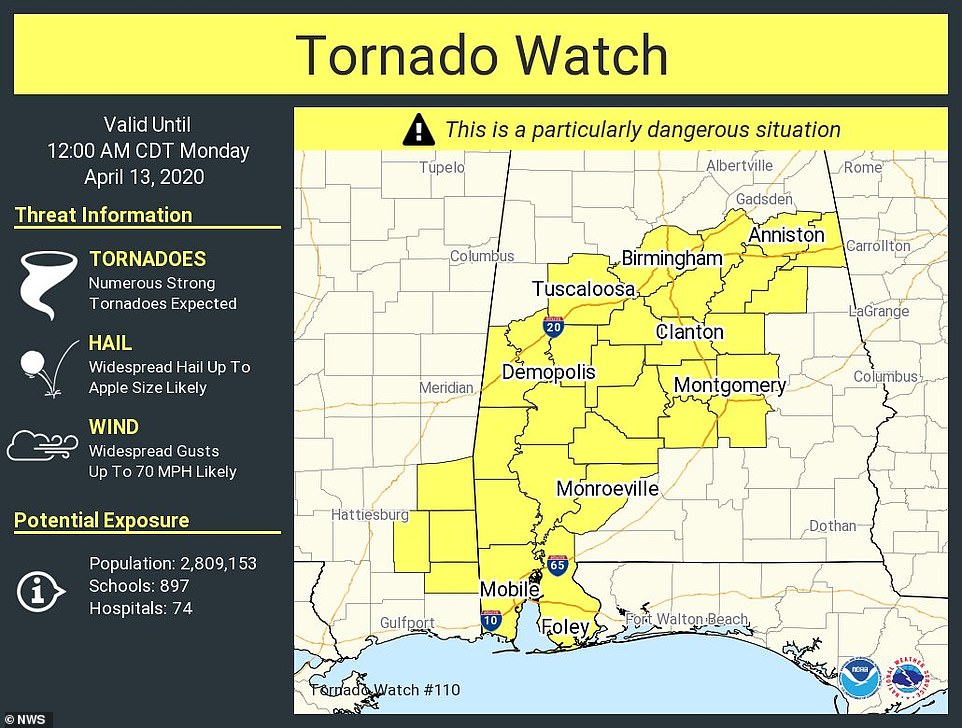 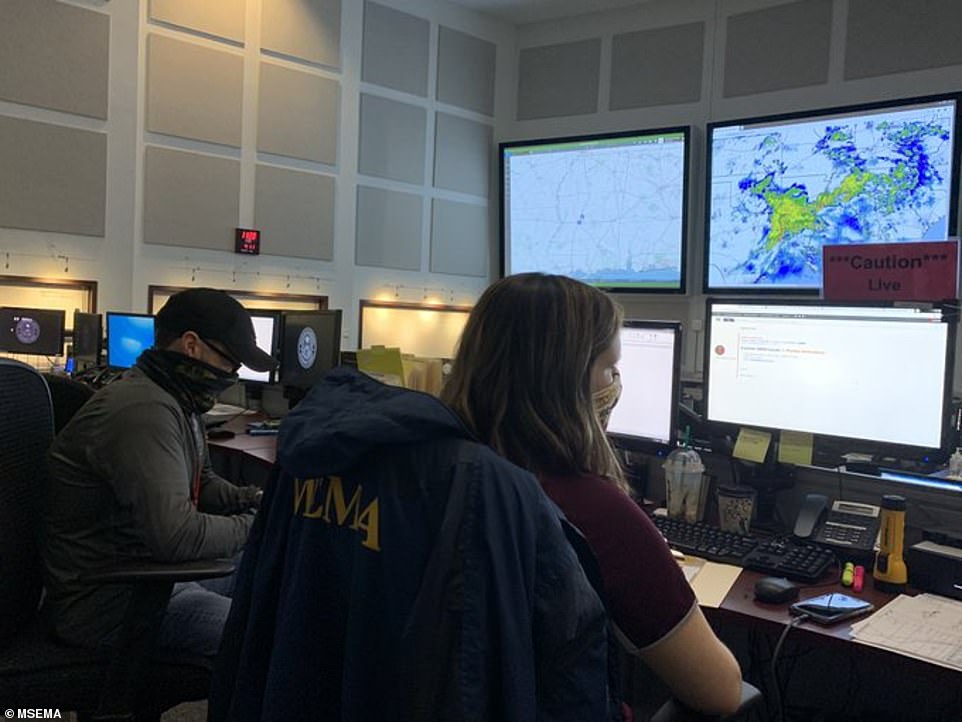 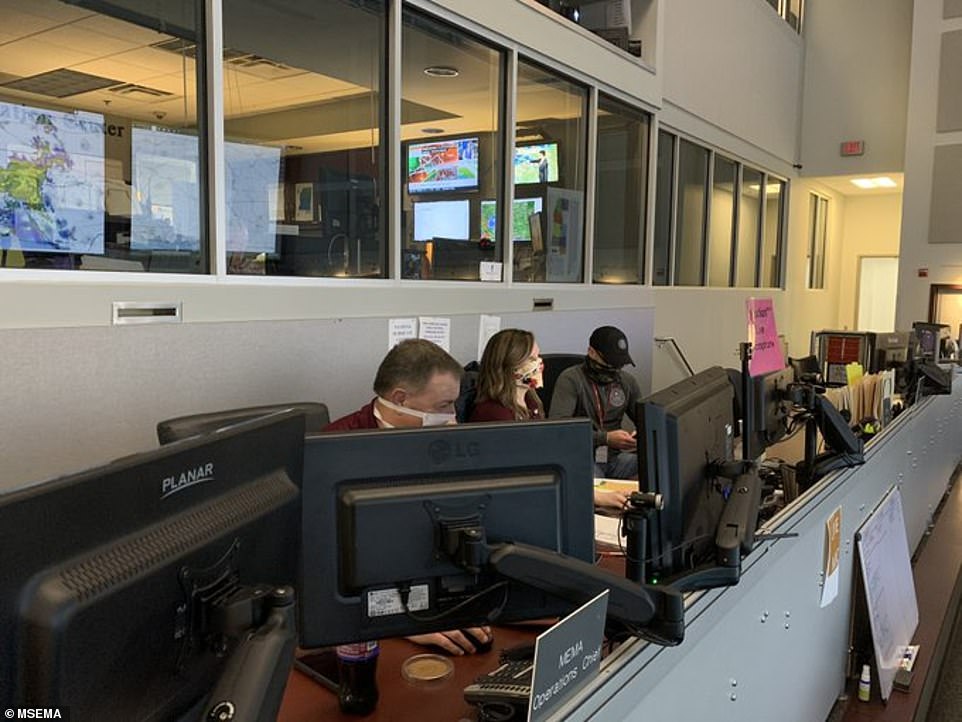 ‘Our team are monitoring the weather and are ready to assist. Have a safe place to go. If you go to a public shelter please wear a mask, bandana, or scarf around your nose and mouth. Practice social distancing. We will get through this!’ they tweeted 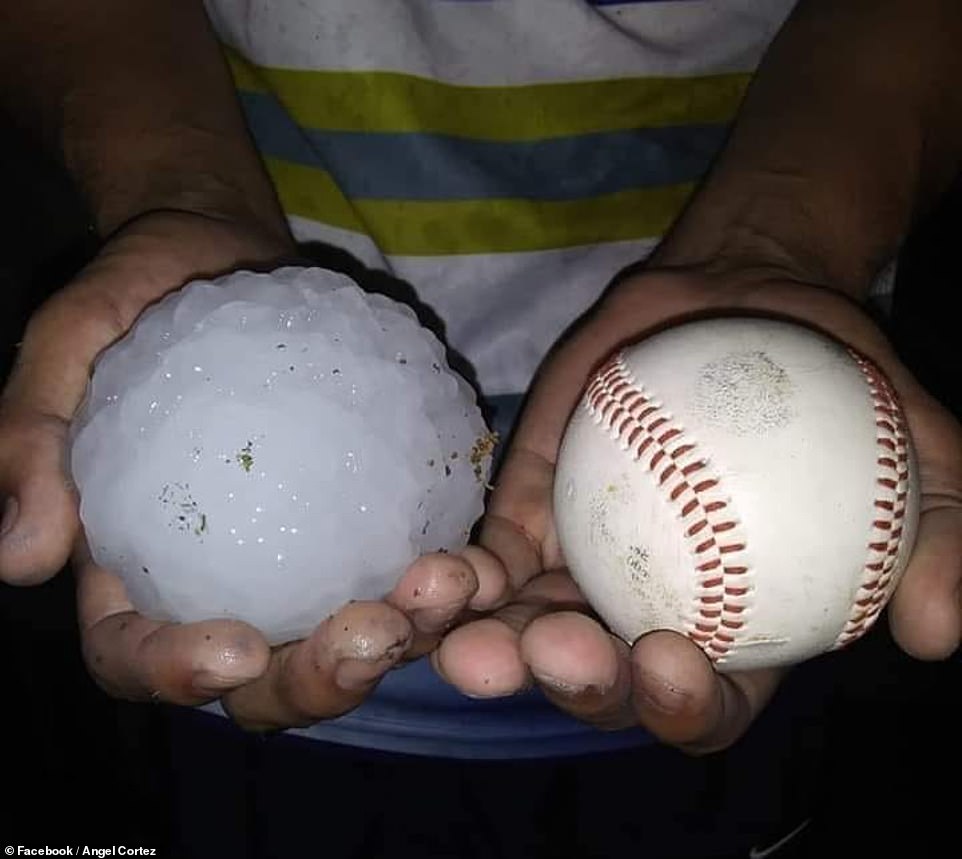 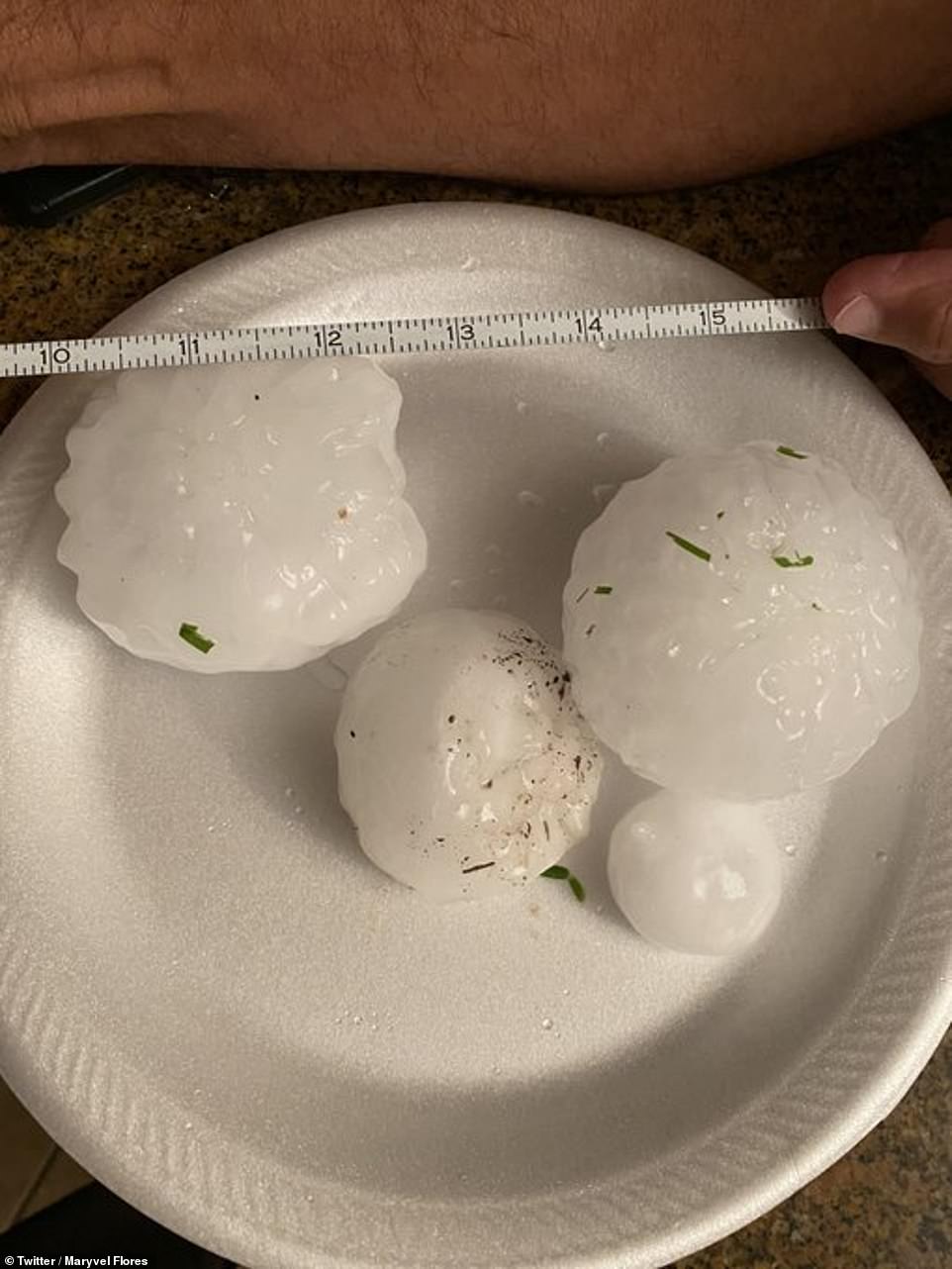 Some of the hail that fell was larger than two inches, larger than a golf ball and in cases as large as a baseball 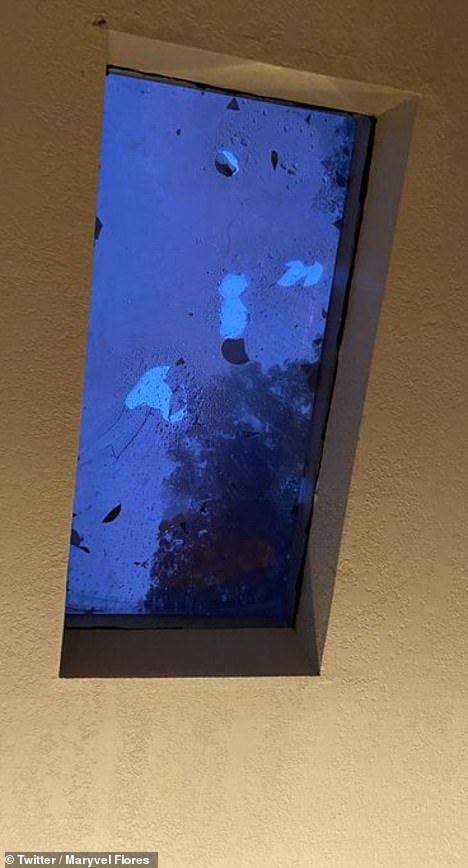 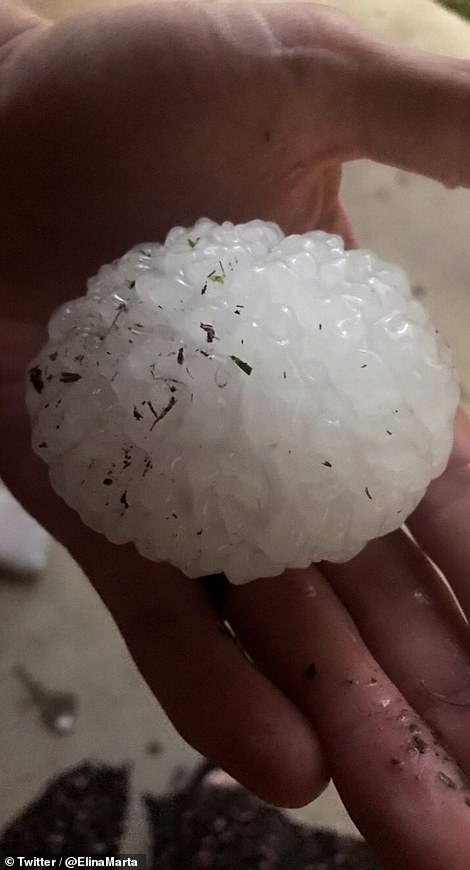 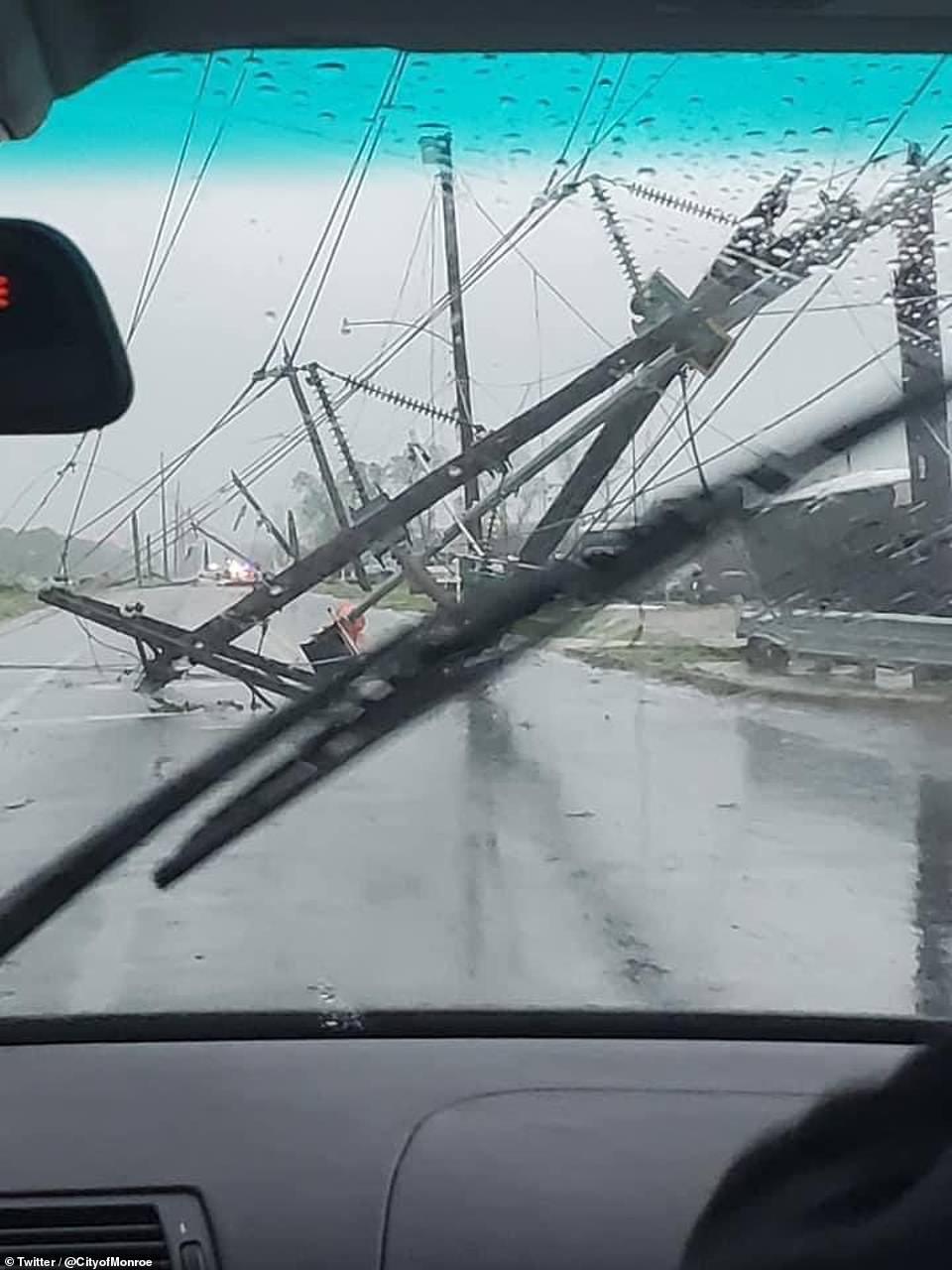 The National Weather Service had declared a tornado emergency for Monroe and the surrounding communities at 11:44am CDT as a confirmed ‘damaging’ tornado was hitting the area 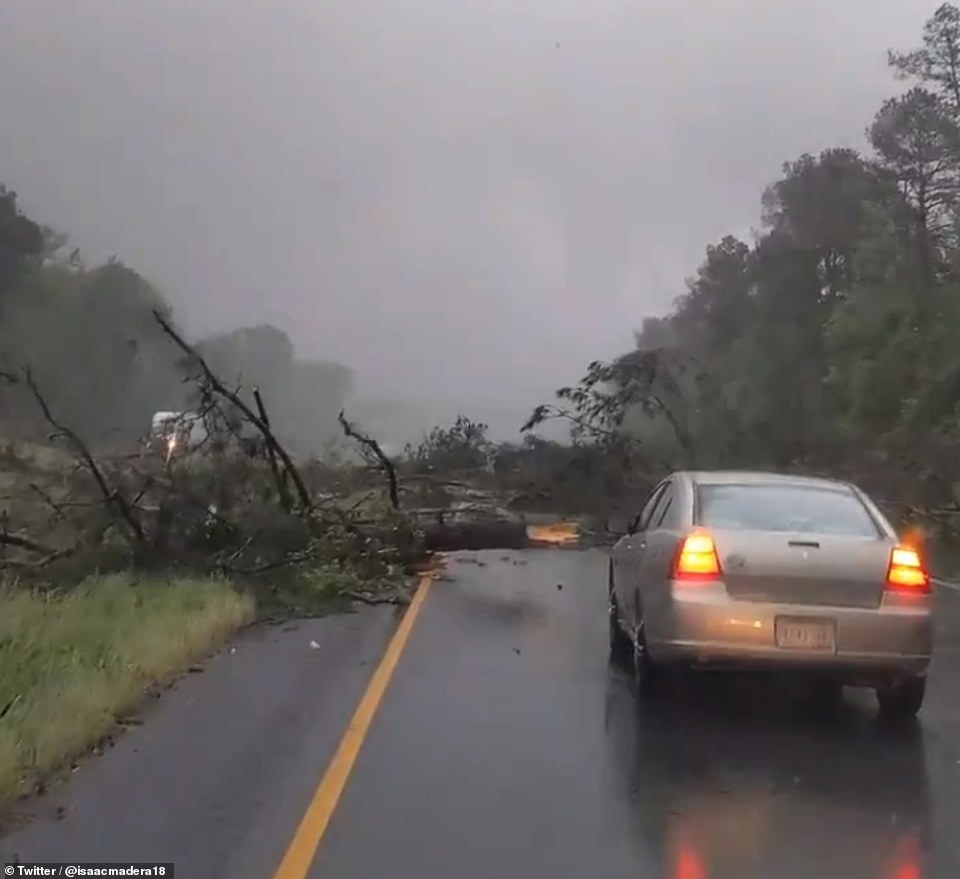 Footage was shot by one man driving along I-20 near Arcaria, Louisiana which saw downed trees lining the highway 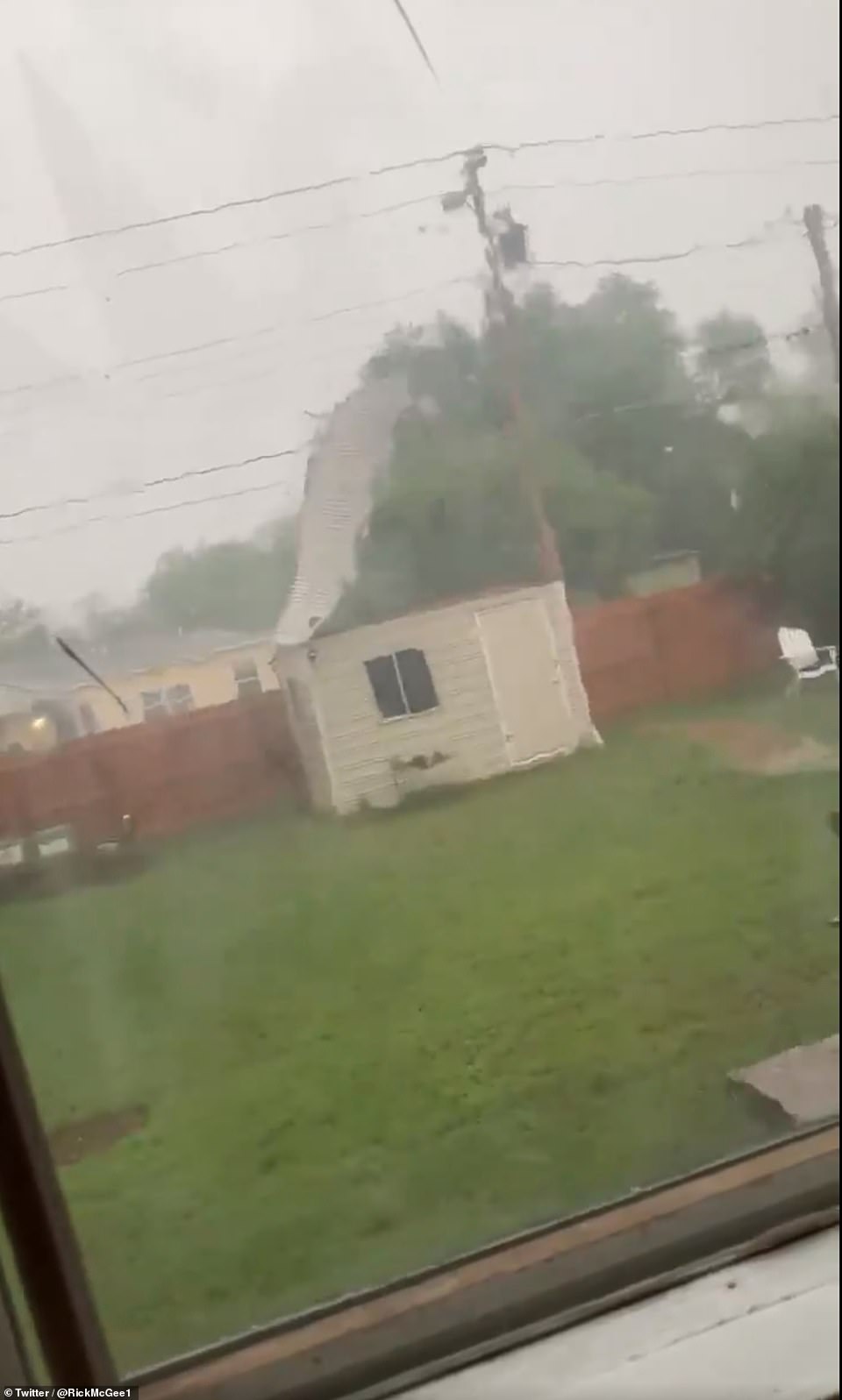 Rick McGee ins San Angelo, Texas filmed the roof of his shed flying away as he videoed the storm from his home

Shoals Creek Baptist Church in Priceville was struck by lightning around 12:45 p.m. No injuries were reported.

‘This could be a very difficult day weatherwise,’ Mississippi Gov. Tate Reeves told residents in a live Facebook presentation earlier in the day.

The weather service said a broader area, from east Texas to the East Coast was under at least a ‘marginal’ risk of storms.

Portions of central Texas were under tornado warnings as the twisters touched down accompanied by what witnesses called ‘gigantic’ hail. P

Photos of the damage in Round Mountain, Texas, about an hour west of Austin, showed overturned trees and a trailer destroyed by the storm. 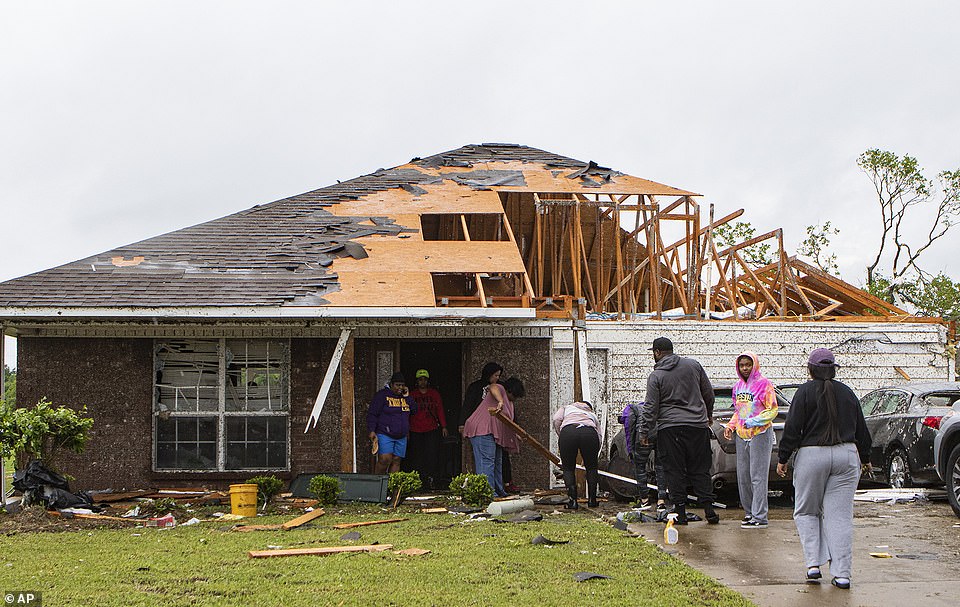 Neighbors and family help to clean a damaged home in Monroe, Louisiana after a tornado ripped through the town 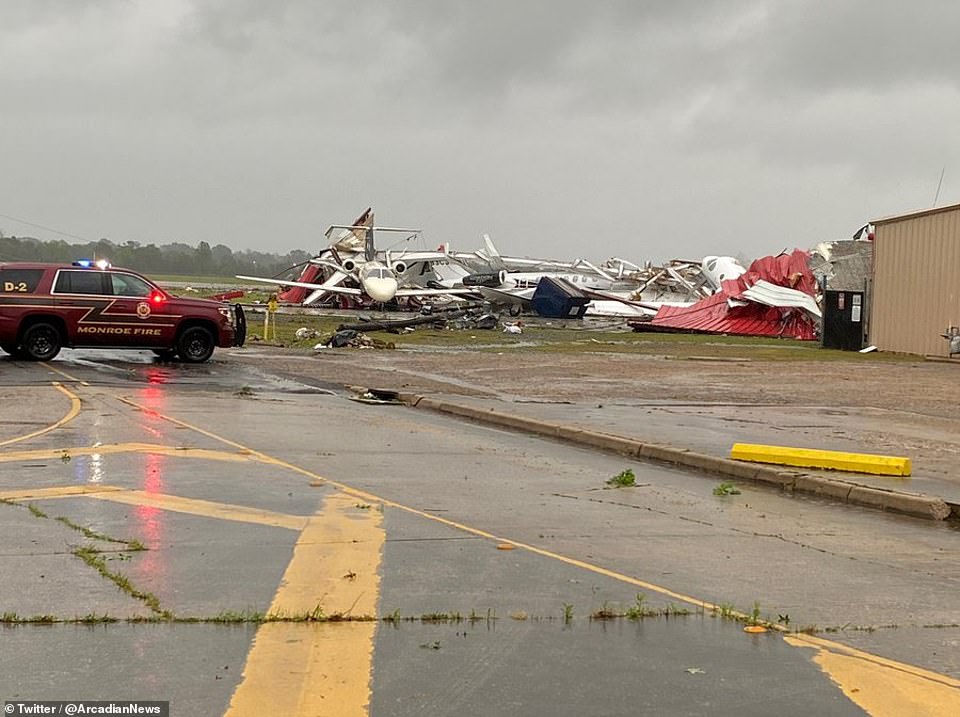 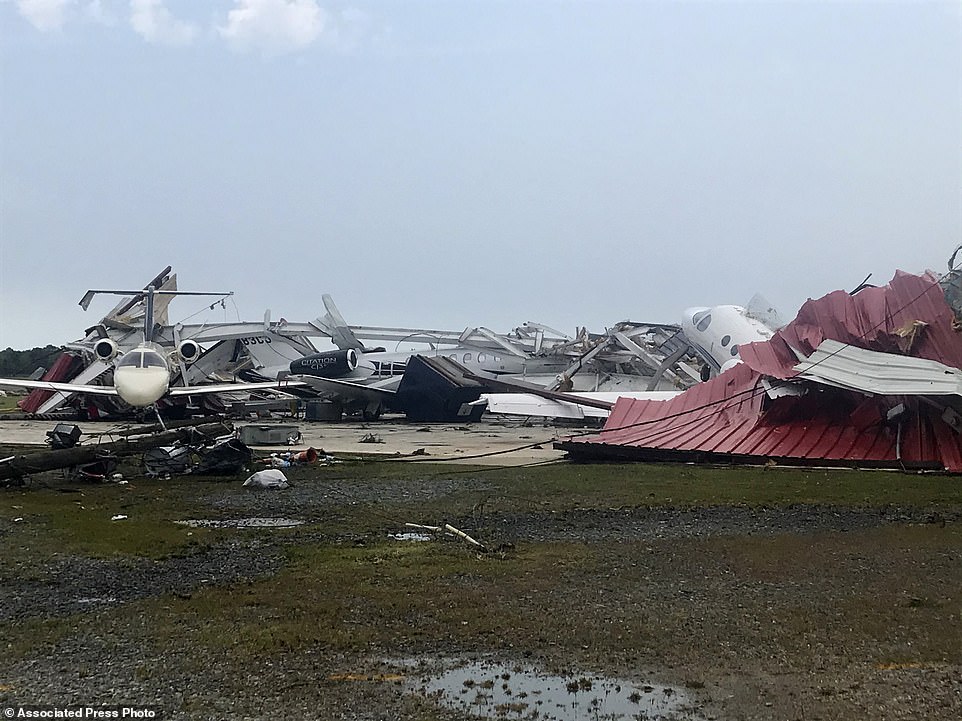 A destroyed hangar and damaged planes are seen at Monroe Regional Airport in Monroe, Louisiana 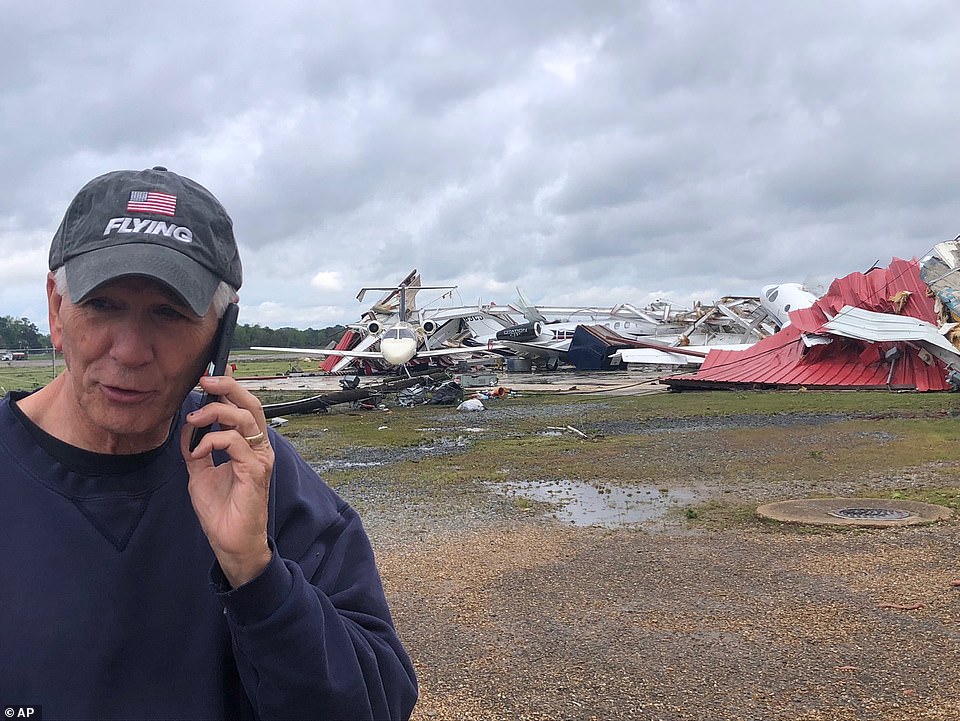 Rep. Ralph Abraham, R-La., he is seen talking on his phone in front of a destroyed hangar and damaged planes at Monroe Regional Airport in Monroe, Louisiana 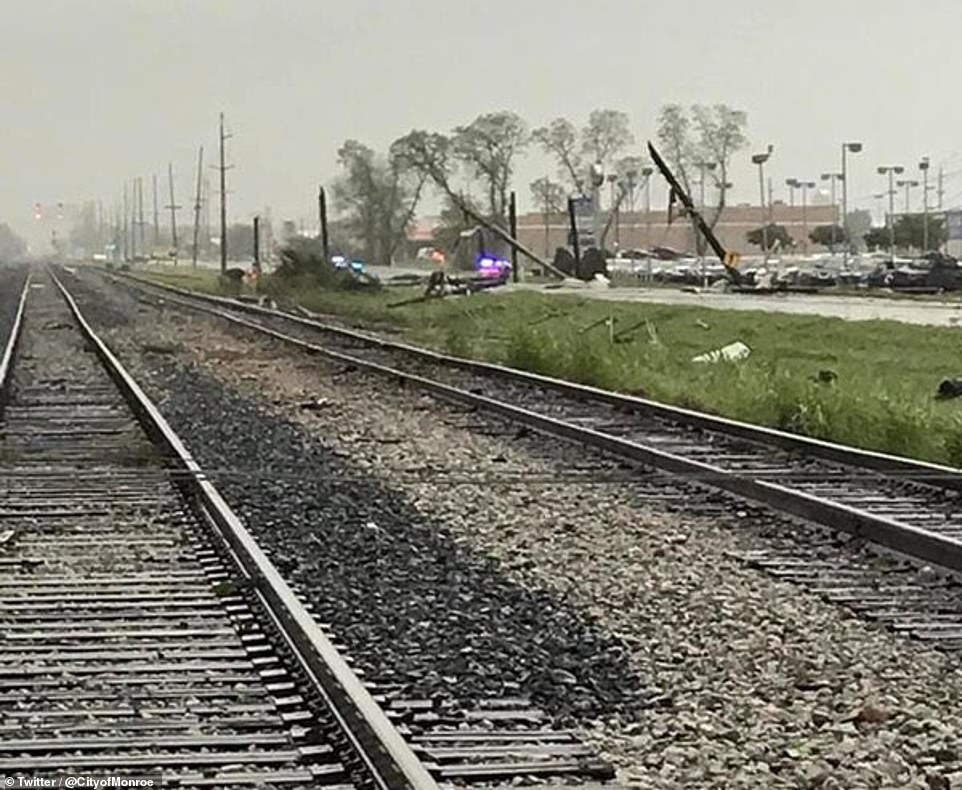 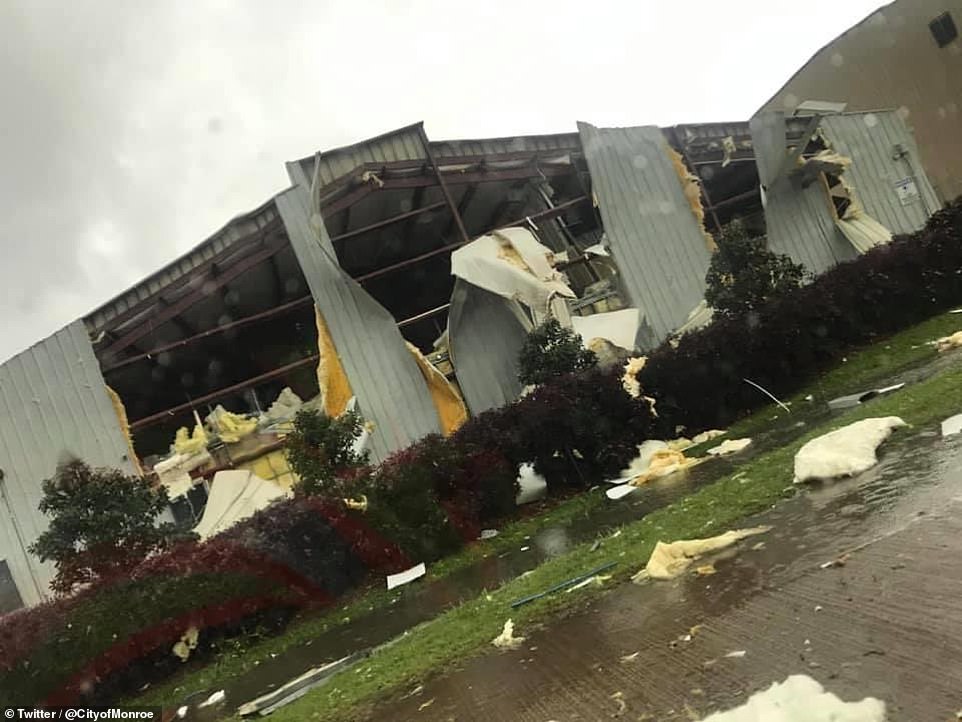