Some of China’s most popular tourist sites have resumed their business after staying closed for nearly two months to stop the spread of the novel coronavirus.

The Badaling section of the Great Wall in Beijing partially reopened yesterday while the Terracotta Army in Xi’an welcomed its first visitors today after the temporary shutdown.

Other renowned scenic spots, including the West Lake, Canton Tower and Leshan Giant Buddha, have also opened their doors. The Shanghai Disneyland, Potala Palace and Forbidden City, however, remain shut. 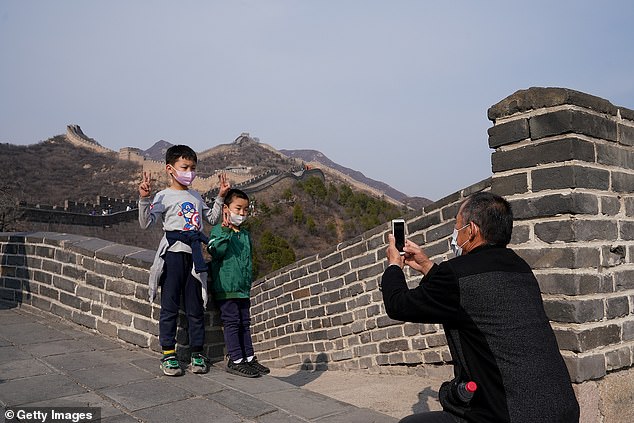 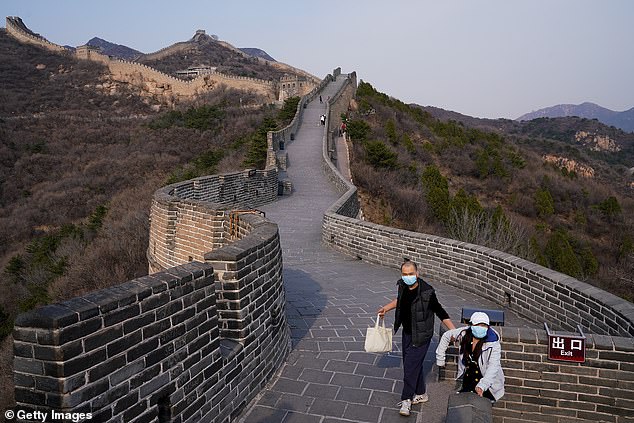 People must book their tickets in advance and have their temperature taken before entering the Great Wall in Badaling. They are also required to show their green health code upon arrival to prove that they are virus-free.

Tourists must wear face masks and stay at least one metre (three feet) away from each other at all times while climbing the historic fortification, according to a notice.

Medical workers and active military personnel will get free entry ‘for the huge sacrifice they’ve made during the outbreak,’ the management of Badaling told the press.

Less than 1,000 people visited the Great Wall on its first day of reopening, a dramatic plunge from the daily quota of 65,000 tourists last year, according to the press. 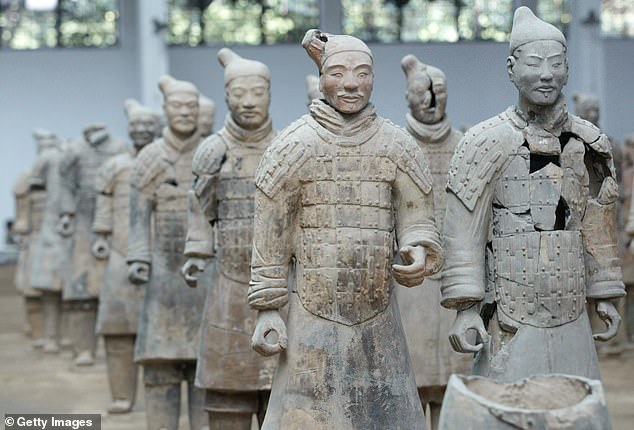 The Terracotta Army Museum has adopted a similar set of rules and only allowed visitors to book their tickets online beforehand. It has reopened to the public today

The Terracotta Army Museum has adopted a similar set of rules and only allowed visitors to book their tickets online beforehand.

Group tours and tour guides are currently not available in the ancient tombs to avoid the risk of cross-infection.

The museum said it would temporally close if the number of visitors exceeds the daily limit of 8,000 people.

Nearly 130 scenic spots in Hubei Province have resumed business as of yesterday while the former epicentre slowly gets back on its feet.

Video shows local residents taking a stroll and enjoying the early spring at some of such tourist attractions.

The Yuquan Mountain Park in Yichang has reopened to the public on Satuday, Li Xuejiao, a spokesperson from the scenic spot told Pear Video.

‘We are disinfecting the public areas of the park every day. All visitors and staff members must wear face masks at all times,’ Ms Li added. 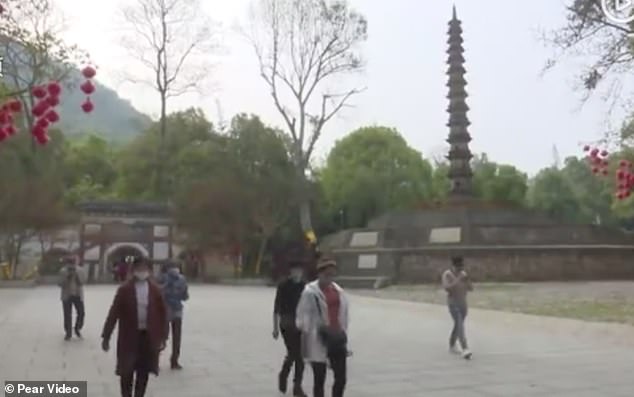 Nearly 130 scenic spots in Hubei Province have resumed business as of yesterday while the former epicentre slowly gets back on its feet. People are pictured visiting a park in Hubei 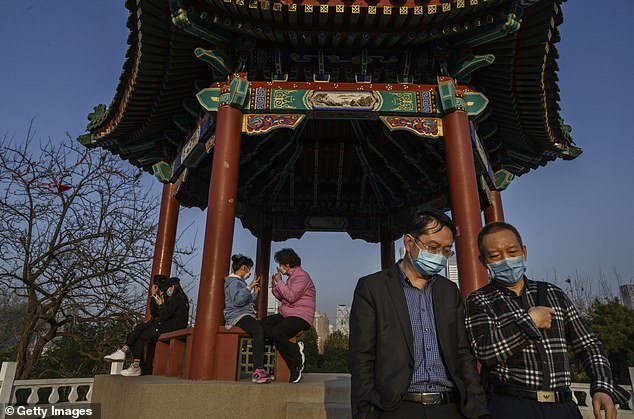 The news comes as millions of Chinese residents have been allowed to leave Hubei today after officials lifted a two-month lockdown on the former coronavirus epicentre.

Authorities today removed the travel restrictions across the central province, except in the city of Wuhan. The clampdown on Wuhan will be enforced until April 8.

Latest footage captures the moment local firefighters cheered as they removed traffic barricades on a highway at midnight to let cars leave the region. A queue of cars is seen waiting to pass. 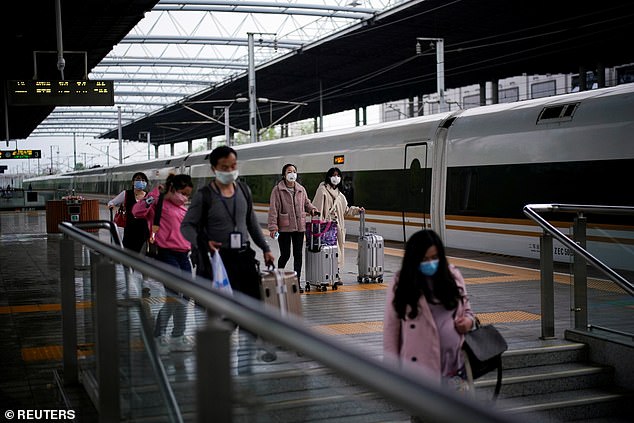 Hubei residents can now resume travel with a green health code issued by the provincial government to prove that they are not potential coronavirus carriers. Passengers wearing face masks travel with their belongings at a railway station in Xianning of Hubei

Hubei residents can now resume travel with a green health code issued by the provincial government to prove that they are not potential coronavirus carriers.

Travellers will also have their temperature taken and ID checked before leaving Hubei.

After more than eight weeks of draconian measures, the city of Wuhan has witnessed a sharp drop in the number of patients. It reported zero new cases for five consecutive days between March 19 and 23.

Since Monday, small groups of Wuhan residents have been allowed to leave their residential complexes for the first time in weeks. Migrant workers from other cities in the province also arrived on a train back to Wuhan over the weekend.

The move comes as China claims to have largely contained the outbreak, reporting only imported cases and few new domestic cases in the past week.

The epicentre shifted to Europe in March, with Italy and Spain among the worst affected.

Globally, over 430,000 people have been infected with the contagion and the death roll has risen to 19,557. 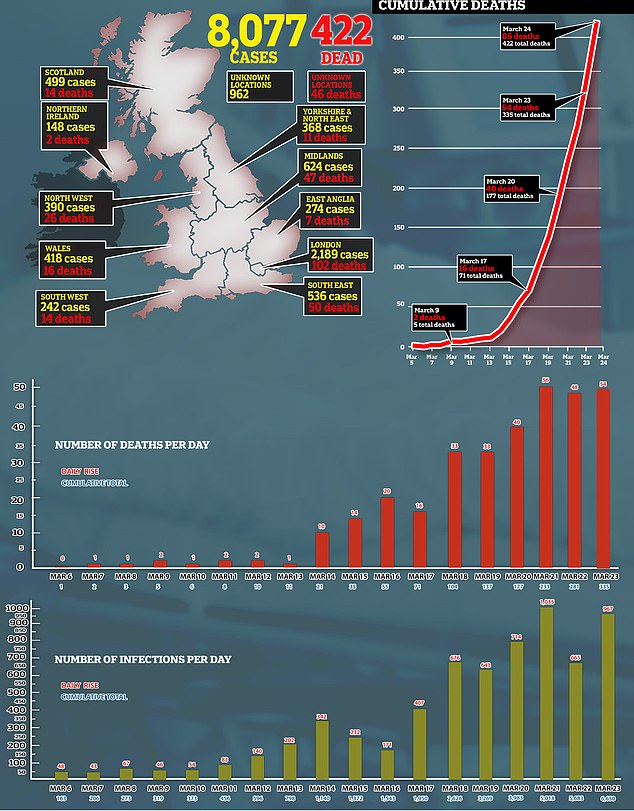