For 23-year-old Mia Wansbrough and the rest of Melbourne’s Southern Cross Lady Reign squad, training for months on Zoom for the 2021 international Cheerleading Worlds was challenge enough.

The sport – recognised by the International Olympic Committee in 2020 – involves teams of girls and women (and some men in “co-ed” teams) throwing each other in the air, balancing in complex pyramids and pulling off chains of synchronised flips.

Being in the same room helps.

But making a high-intensity combination of acrobatics, gymnastics, tumbles and jumps look electric in a Northcote gym with zero crowd vibe – instead of a packed Wide World of Sports arena at Disney World in Florida where the event was supposed to happen – was perhaps the trickier feat.

Earlier this month Lady Reign and five other Australian cheer teams pulled it off, becoming the first Australians to take gold in the (virtual) International All Star Federation world cheer championships.

“We knew we had a pretty good chance of globing [winning a globe-shaped trophy given to the top three], we were really proud of our routine,” said Ms Wansbrough, a gymnastics kid who got into cheer at Monash University while studying science. 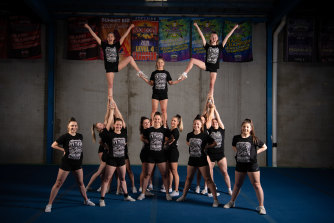 “We were supposed to compete with the same routine at the worlds in 2020, in Orlando, but they got cancelled due to COVID.”

This year teams from around the world were given apps to stream their performances on competition day, and were allowed two attempts at their best recording.

Keeping the energy up in Melbourne’s 2020 lockdowns meant training online by themselves. Members had to imagine group moves as best they could; difficult for Ms Wansbrough as she is a “flyer” whose job involves spinning about mid-air.

“It wasn’t exactly cheerleading; we would do the best we could to replicate it. If you were a base [person at the bottom of the pyramid] ‘hold someone up’, and I pulled a lot of lines [high showpiece poses] on the floor. It helped maintain our fitness for when we got back.”

Coach Momoko Hamaguchi, who has been training cheer teams for 10 years and still competes, said once the sport was recognised by the IOC, the competitors were permitted to gather for training during lockdowns, so her team has been doing did six hours a week together since July.

She was impressed to see motivation maintained despite the disappointment when 2020’s Florida worlds were cancelled. 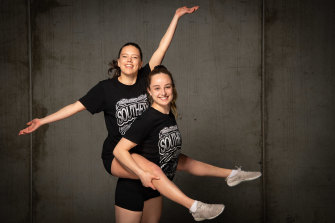 Mia Wansbrough and teammate Caitlin Dagher are world cheer champions, they hope to compete for their next titles in the US, not by video stream from their gym.Credit:Eddie Jim

“It was a long journey, when things were a little bit hard they might have given up, but the whole team really bonded well … when you see the athletes’ faces when they find out they won, everything was so worth it for that moment,” said Ms Hamaguchi.

Ms Wansbrough, who works as a research lab assistant, said Lady Reign rehearsed its 2½-minute routine so many times that without crowd feedback, the winning performance did not feel different until near the end when they realised they were in contention for a win.

“It was very bizarre,” she says of video competition.

“The biggest thing was doing it without a crowd, none of our families or friends could be there to see it.”

Teammate Caitlin Dagher, a law/psychology student who also works in a legal firm, said the win was all the sweeter because members of Lady Reign who competed in Orlando in 2019 wanted to make up for small fall that blew them from third to fifth place.

The big win also had personal significance: “I was a gymnast from the age of two, and always wanted to compete for Australia at a world championships but got to 14 or 15, tried my hardest, but it didn’t really work out,” said Ms Dagher. 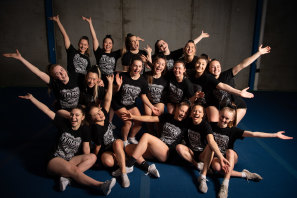 She found cheer at La Trobe University and, thinking it would be “a good way to flip around a bit and make some friends”, got involved.

“Of all the sports I’ve done, cheer has been the most difficult; it’s the variety of skills required [to be performed] on a timeframe,” she said.

It includes a few unexpected bumps.

“We definitely have falls, particularly when you get to a high level, but there’s a lot of emphasis on catching your flier. 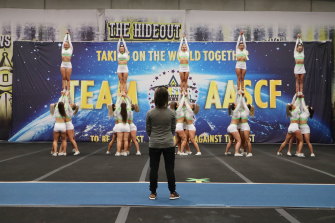 The winning preformance had to be streamed on an app, with teams having two chances to record their best.

“I am a base, and I took quite a lot of hits from [Mia] coming down – often people do fall, and as a base, your role is to put your body between the flier and the floor.”

“Trust between the team is second to none.”

In need of some good news? The Greater Good newsletter delivers stories to your inbox to brighten your outlook. Sign up here.