London: Former British Conservative Party leader William Hague has called on Scott Morrison to end Australia's climate wars and adopt a net-zero carbon emissions target ahead of the United Nations climate change conference to be held in Glasgow this November.

Lord Hague, also Britain's former Foreign Secretary, was highly critical of the Australian government's approach to climate policy and called on climate denialists within conservative ranks to acknowledge that the science was accepted and settled.

He said leaving the issue of climate change to left-wing politicians would result in responses that were socialist, rather than driven by technology or market forces. The coalition should also consider carbon pricing as a way of curbing emissions. 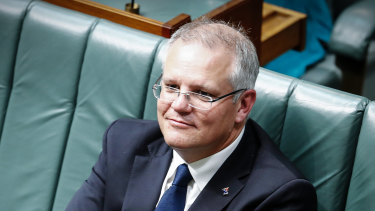 Then treasurer Scott Morrison with a lump of coal in Parliament in February 2017.Credit: Alex Ellinghausen

"That's what we're trying to do in the UK and so it's really important for politicians of the centre-right to be presenting their ideas on the subject that's coming anyway."

Hague has previously warned of a citizen uprising if politicians fail to address the community's demands for climate action.

Prime Minister Scott Morrison, who famously carried a lump of coal into the parliament to taunt his Labor opponents, is resisting pressure to adopt the target announced by the Labor opposition last week, saying it is the "same bill" Australia couldn't afford at the last election when the Opposition proposed cutting emissions by 45 per cent by 2030. The "bill" comment was a reference to the Liberals' campaign slogan targeting then-Labor leader Bill Shorten. 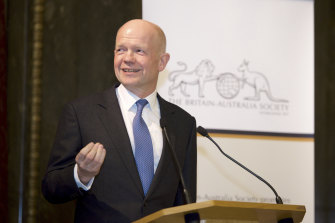 Former Liberal Prime Minister Malcolm Turnbull failed in his continued campaign against climate sceptics and advocates of inaction in his former partyroom.

They also align with many in the business sector and state governments who have all pledged net-zero emissions by 2050. In recent weeks, resources companies BP and Rio Tinto have also individually pledged to be carbon neutral by the middle of the century.