We have made our live coverage of the coronavirus pandemic free for all readers. Please consider supporting our journalism with a subscription.

Victoria’s building industry will be shut for two weeks after a day of unprecedented protests at the construction union’s head office, with windows smashed, projectiles thrown at senior officials and riot police closing down a major city street.

Some critical infrastructure works, such as hospitals and some ongoing level crossing removal projects, will continue during the shutdown that starts from midnight. 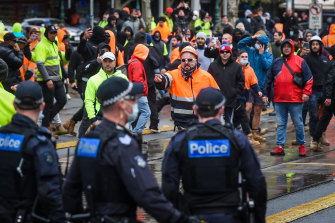 Police and protesters face off out the front of the CFMEU office on Elizabeth Street on Monday. Credit:Justin McManus

The Andrews government formally announced the two-week shutdown late on Monday night, less than three hours before the closure was to begin at 11.59pm.

All projects in metropolitan Melbourne, City of Ballarat, City of Greater Geelong, Surf Coast Shire and Mitchell Shire will be shuttered, with limited exempts for workers to attend closed sites to respond emergencies or perform urgent and essential work to protect health and safety.

Victorian Industrial Relations Minister Tim Pallas said the decision had been driven by multiple outbreaks linked to the industry, as well as “widespread non-compliance” with COVID safety rules.

Cash set to flow to heavily locked down Sydney regions

The NSW government will invest the bulk of its pandemic recovery spending in western Sydney, diverting $5 billion from the sale of the WestConnex motorway to help suburbs that faced the harshest lockdown measures of the Delta outbreak.

With western Sydney to be the battleground in the 2023 state election, the government has established the WestInvest fund from the sale of the second stage of WestConnex. The fund is set to form the cornerstone of the COVID-19 recovery plan. 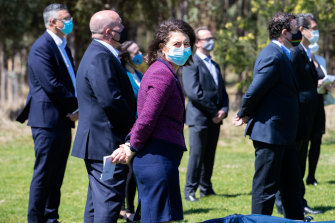 NSW Premier Gladys Berejiklian with other ministers and Coalition MPs in western Sydney on Monday.Credit:Edwina Pickles

Of 15 local government areas in western Sydney set to receive the funding package, 10 have been listed as LGAs of concern during the pandemic and subjected to tighter restrictions such as curfews and exercise limits, including Campbelltown, Canterbury-Bankstown, Cumberland and Fairfield.

The government has spent close to six months working to develop the fund, and will look to prioritise small projects that can be undertaken within months to spur job creation and economic recovery.

Read more about the plan here.

This morning’s headlines at a glance

Good morning and thanks for reading our live coverage.

It’s Tuesday, September 21. I’m Broede Carmody and I’ll take you through some of the morning’s top stories.

Here’s everything you need to know before you start the day.

Coleen Rooney reveals how she ramped up her Wagatha Christie 'sting'