Australians hit the bars, hair salons and slot machine venues in Sydney as Covid lockdown ends at midnight local time after 106 days of ‘blood, sweat and no beers’

Joyful Australians hit the bars to celebrate the end of lockdown in Sydney after 106 days of ‘blood, sweat and no beers’.

Large queues were seen outside bars and slot machines venues – known is Australia as ‘pokies’ – ahead of the long-awaited ‘Freedom Day’, which began at midnight local time.

While much of Europe and the US has long since been reopened, Sydney – which is home to more than five million people – and the wider county of New South Wales have been in a strict lockdown since June.

The stay-at-home order was announced for non-essential workers after 80 cases of the Delta variant – which came to be known as ‘the Bondi Cluster’ – were discovered in the county.

By comparison the UK removed all Covid restrictions on July 19 – a day in which almost 40,000 new cases were recorded.

Australia had planned for ‘Zero Covid’ – eliminating all cases from the country – through harsh lockdowns and strict immigration controls.

But the spread of the more infectious Delta variant – which saw case numbers rise to 1,600-a-day in Sydney at its peak – convinced local government officials to impose a fresh lockdown in June.

But realising Zero Covid was no longer achievable due to the highly-transmissible Delta variant, the policy has since been moved to a ‘living with Covid’ strategy.

With cases now falling – 477 Covid infections were recorded in Sydney on Sunday – and as much as 70 per cent of the now vaccinated, the local state government has now decided to lift restrictions in New South Wales.

‘It’s a big day for our state,’ said New South Wales’ recently appointed premier Dominic Perrottet. After ‘100 days of blood, sweat and no beers,’ he said, ‘you’ve earned it.’

Joyous Australians have hit the bars to celebrate the end of lockdown in Sydney after 106 days of ‘blood, sweat and no beers’. Large queues were seen outside bars and slot machines venues – known is Australia as ‘pokies’ – ahead of the long-awaited ‘Freedom Day’, which began at midnight local time. 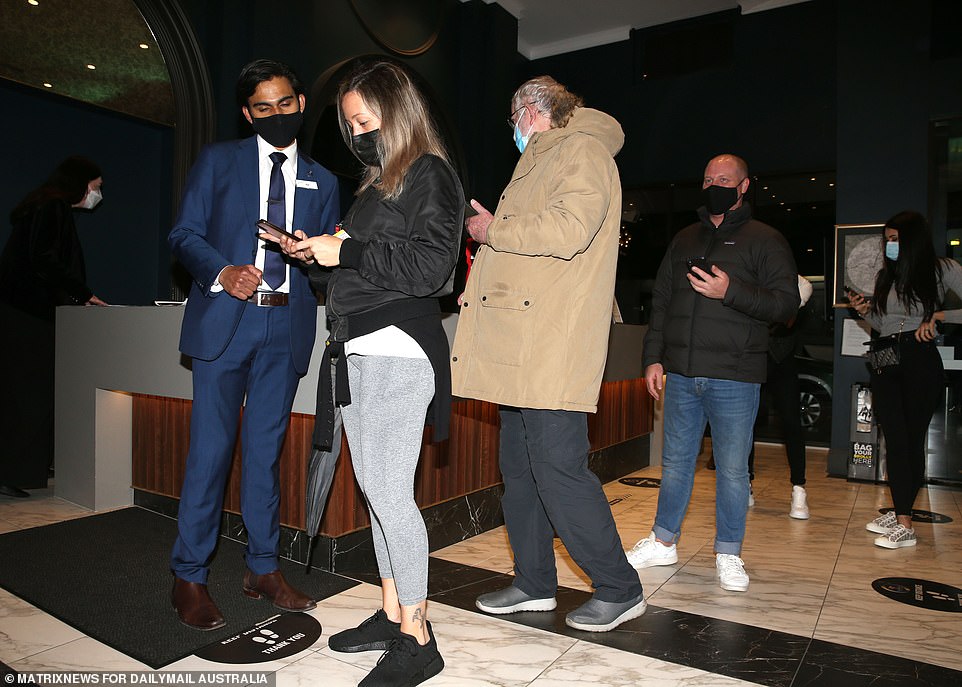 With cases now falling – 477 Covid infections were recorded on Sunday – and as much as 70 per cent of the now vaccinated, the Australian Government has now decided to lift restrictions in New South Wales 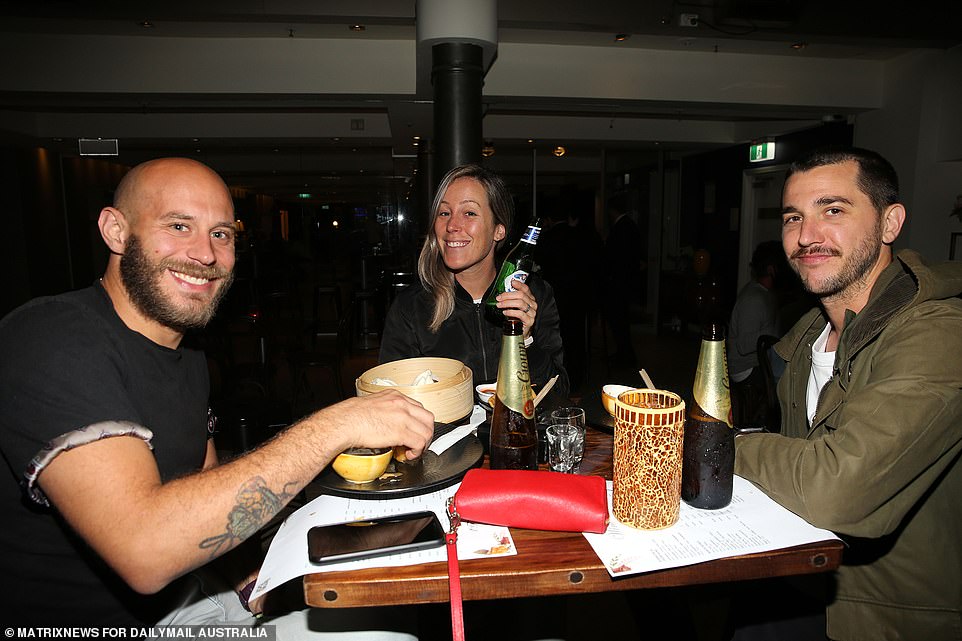 Pictures show Sydneysiders already streaming into bars to enjoy a first night on the town since June. Here a group celebrate with food and drink 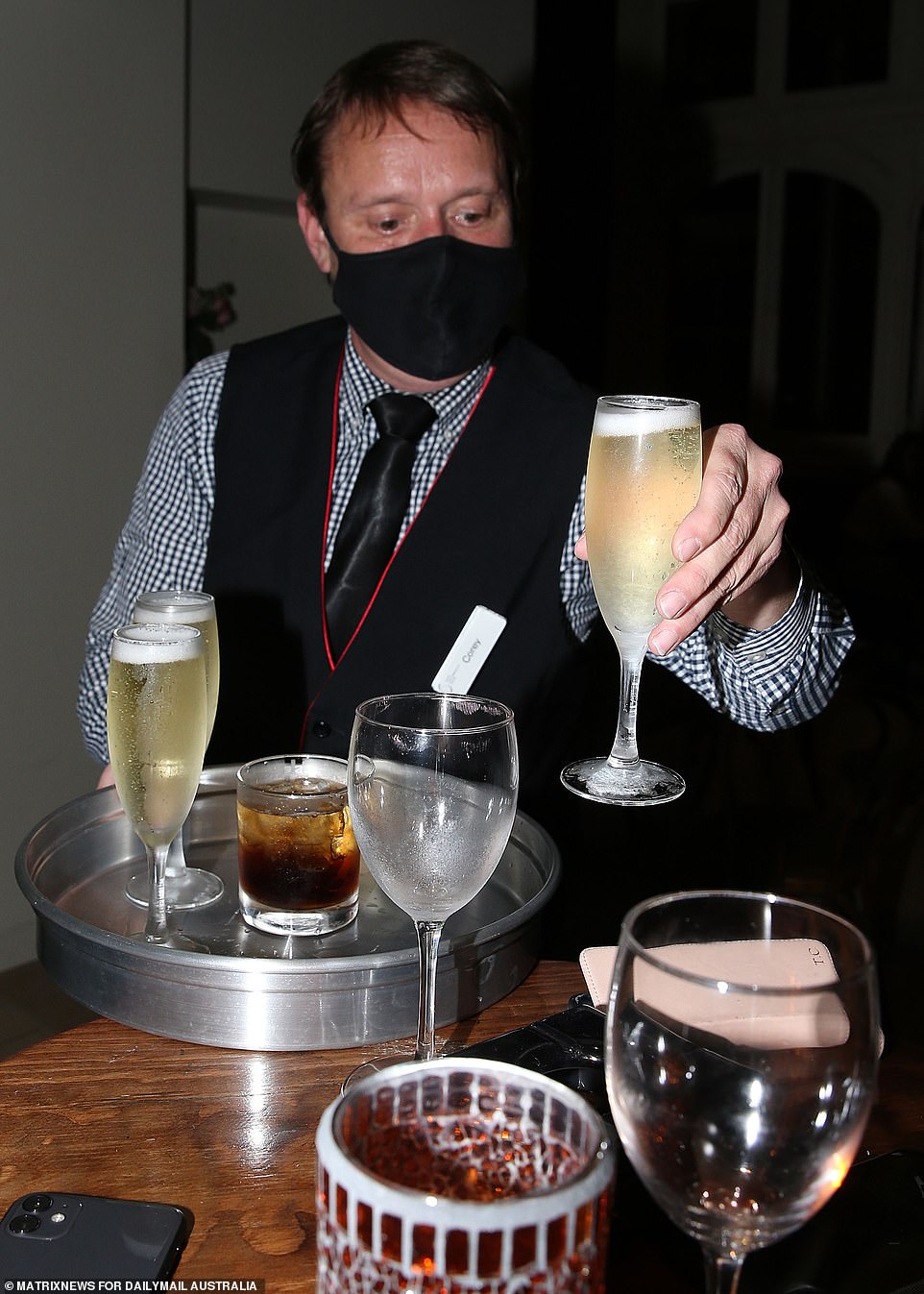 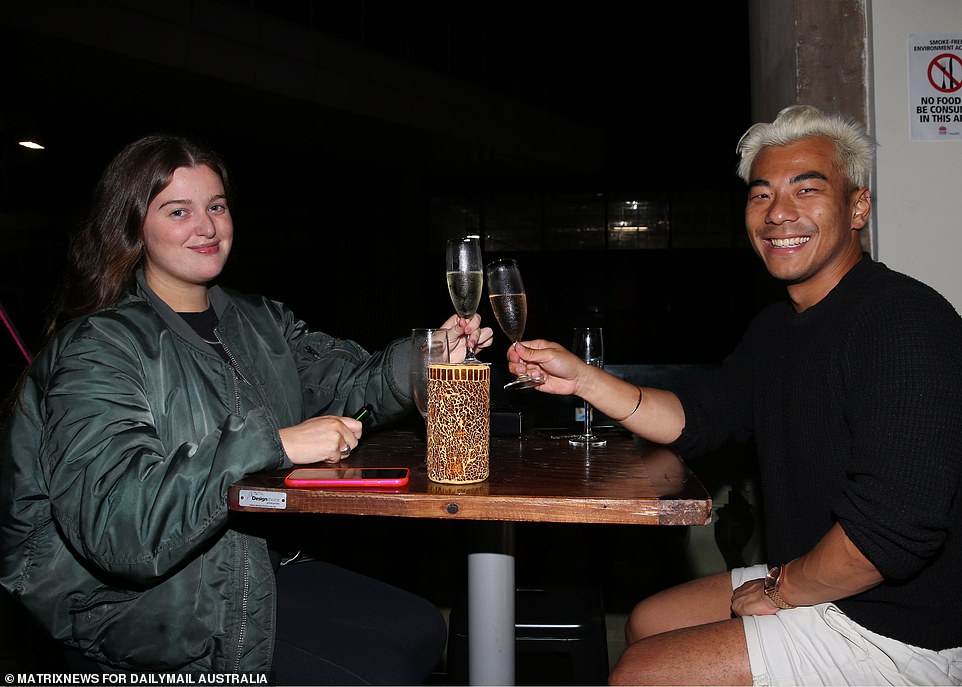 Stephanie and Audi, both 26, enjoying their first drinks today after 106 days of lockdown in New South Wales in Australia

Pictures show Sydneysiders already streaming into bars to enjoy a first night on the town since June. Many were seen wearing masks and preparing their QR codes to be scanned as they awaited entry.

One photograph showed Australians queuing around the side of a shop ahead of midnight. Non-essential retail shops have been closed in Sydney, but are now allowed to reopen under a ‘one person per square-metre rule.

Under the eased restrictions 10 double-dosed visitors are now allowed to visit homes with 30 permitted to gather outdoors.

Weddings and large funerals are back on, with up to 100 people able to take part in a ceremony – but they must remain seated when eating and drinking. 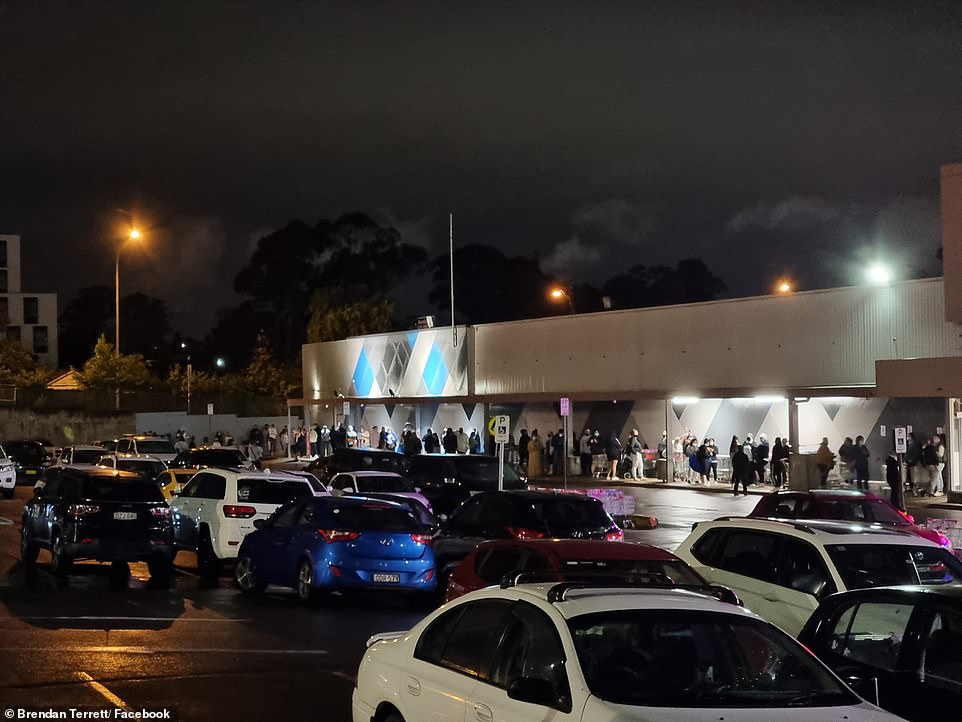 One photograph showed Australians queuing around the side of a shop ahead of midnight. Non-essential retail shops have been closed in Sydney, but are now allowed to reopen under a ‘one person per square-metre rule 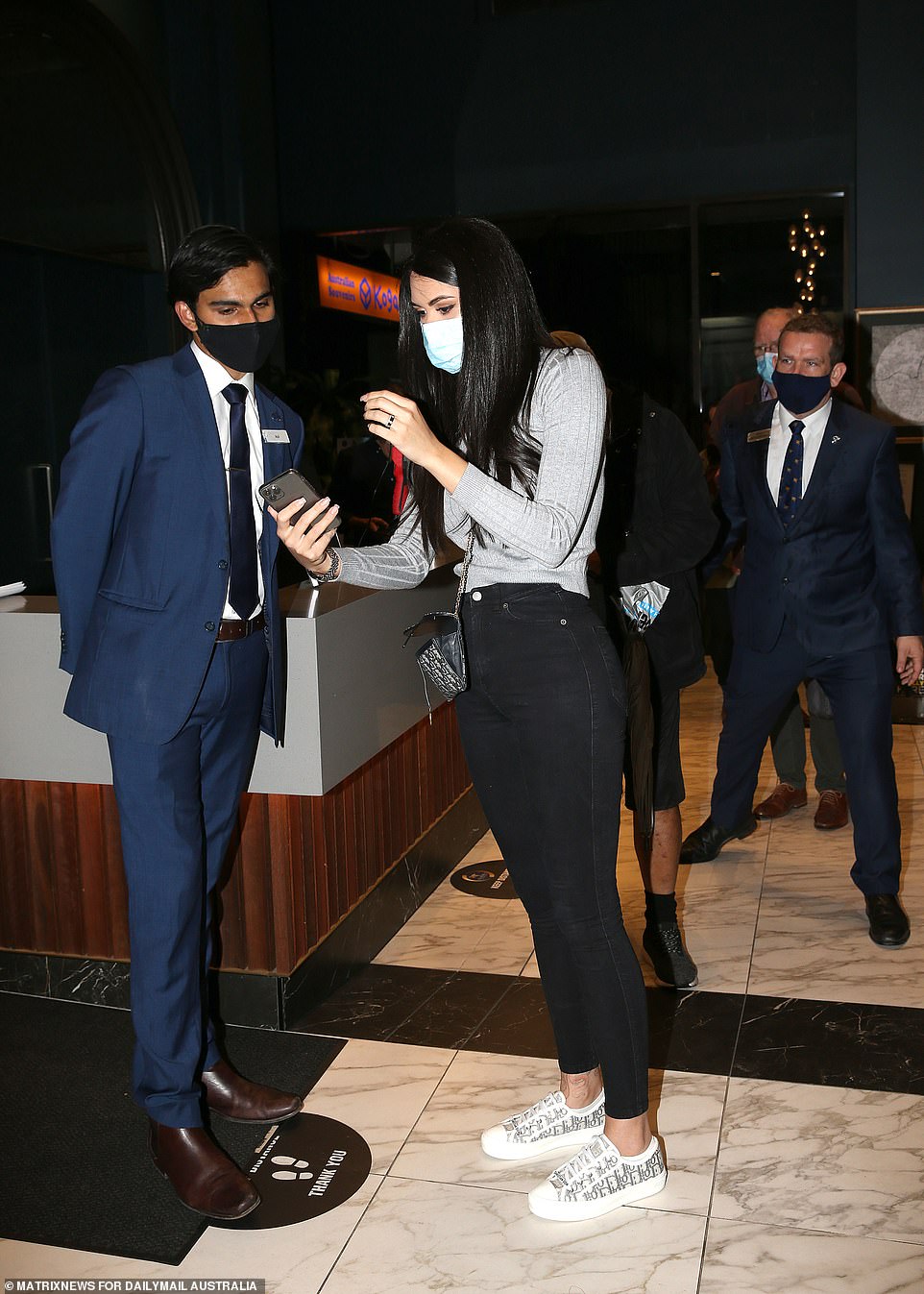 Gyms, cafes, restaurants, pubs, bars, non-essential retail, libraries and churches can operate under the one person per four square metre rule. However nightclubs will remain closed 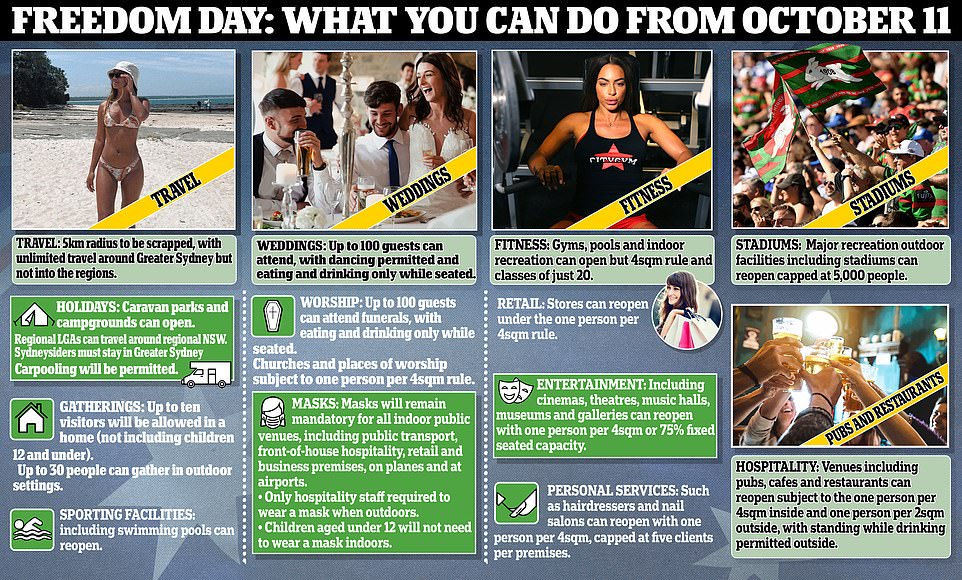 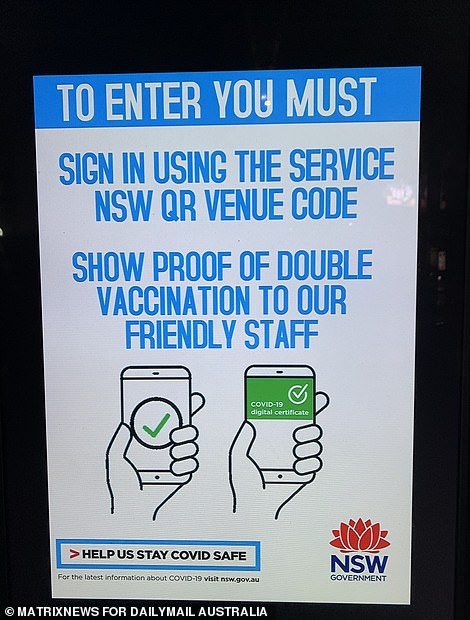 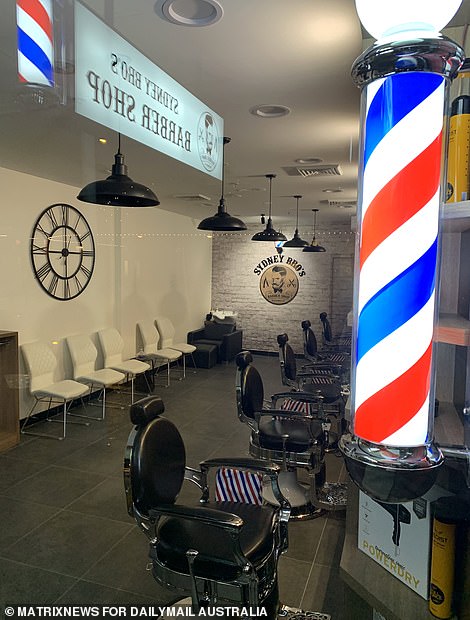 Customers must prove their vaccination status when they enter any venue in NSW or they will be refused (pictured left). Pictured right: A barbers in the city prepares to open after lockdown

What can Sydneysiders after Freedom Day?

If you’ve had both shots of the vaccine you can now travel beyond the 5km bubble.

Sydneysiders can now move about anywhere across the Harbour City as far as the Blue Mountains, Central Coast, or Shellharbour.

Those living in regional areas are free to travel throughout the state.

But intrastate travel between Sydney and regional areas is still a no-go.

DRINKING AND GOING OUT:

Double-dosed residents can now head back to the pub with the one person per sq/m rule in place.

Dancing and standing up indoors is still banned, with nightclubs keeping their doors shut

You can also have up to 10 friends inside their home or gather with 30 outdoors.

Your are now free to get a table at your favourite café or restaurant with the one person per sq/m rule also in place.

Again, only the fully-vaccinated are allowed

Gyms are now open to the fully vaccinated with up to 20 people allowed to workout indoors or in a class.

You can once again browse your favourite shops with retail stores allowed to operate under the one person per sq/m rule.

Catch a movie at the cinema with all indoor entertainment facilities allowed to trade at 75 per cent capacity.

This means theatres are also open, as are museums.

Personal services like haircuts are also permitted with five people allowed in the salon.

Nail salons, barbers and massage parlors will also be open.

Face masks are no longer mandatory outdoors with the exception of hospitality workers actively serving customers.

However nightclubs will remain closed.

Hairdressers and beauticians meanwhile will welcome back vaccinated clients but are restricted to a maximum of five in the premises at one time.

Indoor entertainment facilities such as cinemas, theatres, music halls, museums and galleries can reopen with one person per 4 square metre or 75 per cent fixed seated capacity.

Double-jabbed residents will also be able to venture more than 5km (3 miles) from their home with Sydneysiders able to venture anywhere across the Harbour City and even as far as the Blue Mountains, Central Coast, or Shellharbour.

Those outside of Sydney are also free to move about but travel is still off the cards between regional areas and Sydney for roughly another two weeks.

Further restrictions will be eased later this month once New South Wales hits 80 per cent vaccination, before freedoms open up to the unvaccinated from December 1.

Greater Sydney was plunged into lockdown on June 25 after a string of coronavirus cases in the Bondi area were linked to a limo driver ferrying international flight crew.

Health authorities drastically underestimated the speed at which the Delta variant would tear through the Harbour City with infections quickly becoming too much for the state’s contact tracers to handle.

Since the first known case on June 16 there have been 62,847 locally acquired transmission resulting in 487 deaths.

At its height the daily case number reached a spike of 1573 prompting harsher measures were brought in across Western Sydney, including curfews, to try and stop the spread.

As supplies of Pfizer eventually started to roll in, the state’s vaccination pace skyrocketed and those soaring case rates have now dropped to below 500 cases a day.

There are now 73.53 per cent of the population over 16 who are fully-vaccinated in NSW, with 90.33 per cent already receiving their first dose.

Despite the celebratory mood today, there are lingering concerns about what reopening will bring.

Premier Perrottet – who only recently took over from Gladys Berejiklian – encouraged patrons to treat staff with kindness, with fears that bans on the unvaccinated could lead to protests and confrontation.

There are also fears that reopening will inevitably bring a rash of new infections.

The Australian Medical Association this week pilloried Mr Perrottet when he appeared to shift the focus away from health and onto the economic recovery.

‘The AMA supports gradual opening up of the economy and the loosening of restrictions, but it is critical to observe the impact of each step on transmission and case numbers,’ the doctors’ body said.