This is the adorable moment two baffled cheetah cubs don’t know what to make of a giant tortoise when they meet the creature for the first time in South Africa.

Footage captures the young cheetahs, Skyler and Zahra, as they approach the mystery creature at the Running Wild Conservation centre.

The pair are on an outing as part of their reintroduction to the wild process when they stumble across the reptile. 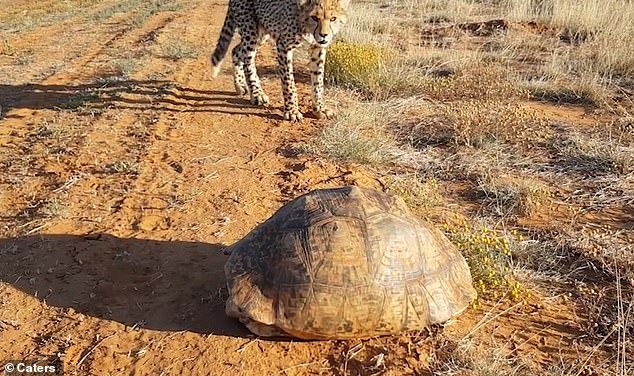 The tortoise, which remains safely inside its shell throughout the clip, is sat by a small track road when Skyler and Zahra approach.

One of the pair quickly trots over to the reptile, cautiously circling the tortoise.

But the curious animal stays away for a moment longer before bravely stepping towards the mystery creature.

It then bends down to give the tortoise a good sniff before jumping back in fear.

A second cheetah soon joins the first – and the pair spend the next few moments investigating the newfound animal.

Elizke Gouws, founder and director at Running Wild Conservation, said the reaction was expected as this was the pair’s first encounter with such a strange animal. 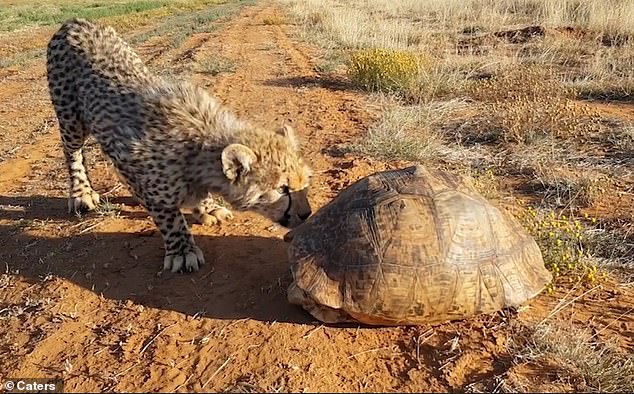 The cheetah, who is on an outing as part of its reintroduction to the wild process, sniffs at the creature after circling it for a moment

‘They are flight not fight animals and mostly avoid contact with any potentially dangerous animals such as lions or hyenas.

‘This trait needs to be learned from the mother, so the cubs tend to be more curious.’

She added: ‘Like most cubs, cheetah cubs are very playful.

‘Later as they mature female cheetahs become solitary cats, but the males tend to form coalitions of up to six cheetahs.’ 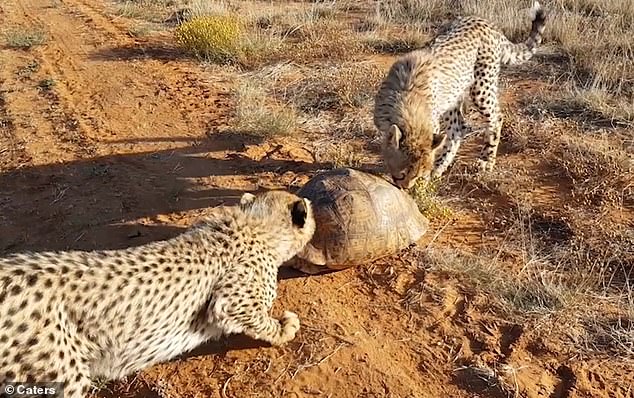 Ms Gouws said Running Wild Conservation is the only cheetah breeding facility in the world that breeds the animals for the sole purpose of reintroducing them into protected wild areas.

She said: ‘Our goal is to ensure the survival of the Southern African cheetah for future generations.

‘We are a nonprofit organisation and depend strongly on donations to continue our ground-breaking conservation efforts.

‘We are not open for public tours or interactions, we do not remove cubs from their mothers and we also do not sell any animals, they are all meant to return to the protected wild where possible.’

‘Start Here’: Trump speaks from the Oval. What you need to know to start your day.