A bakery has slammed the ‘Jane’ who reported them to Trading Standards for having the wrong kind of sprinkles on their cakes.

Get Baked – an independent bakery in Leeds – said it had been an ‘unpleasant journey’ after they were told to stop selling certain items that used imported toppings.

Apparently one disgruntled customer scrutinised the sprinkles on their cookie and then went to Trading Standards to complain the treat had the wrong sort of E-numbers.

The Get Baked independent bakery in Leeds, pictured, has slammed a customer who reported them to Trading Standards over their use of imported American sprinkles 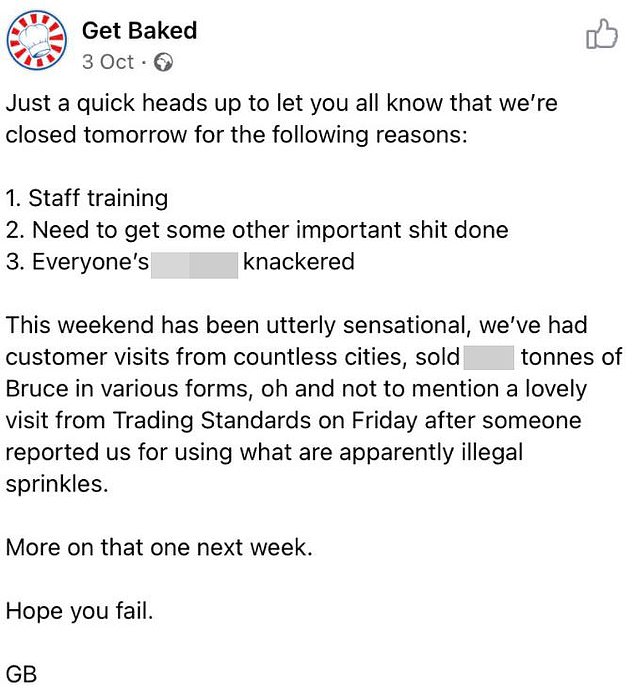 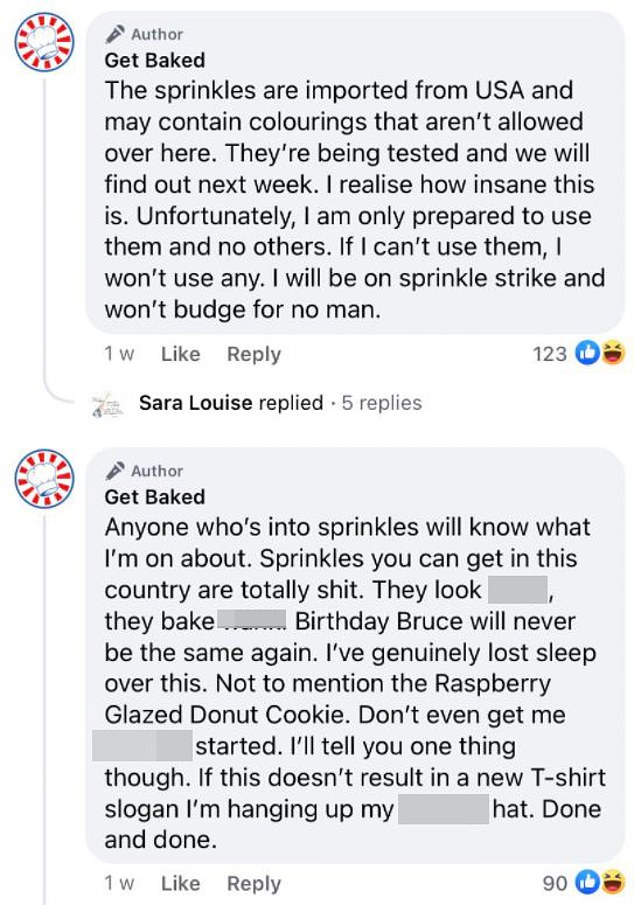 Its first post said: ‘Just a quick heads up to let you all know that we’re closed tomorrow for the following reasons: 1. Staff training. 2. Need to get some other important sh*t done. 3. Everyone’s f****** knackered.’

It went on: ‘This weekend has been utterly sensational, we’ve had customer visits from countless cities, sold f*** tonnes of Bruce in various forms, oh and not to mention a lovely visit from Trading Standards on Friday after someone reported us for using what are apparently illegal sprinkles.

‘More on that one next week*’

It appears that some of the toppings used on items including raspberry glazed cookies were not allowed.

The store said it imported them from America because British sprinkles ‘were s***.’ 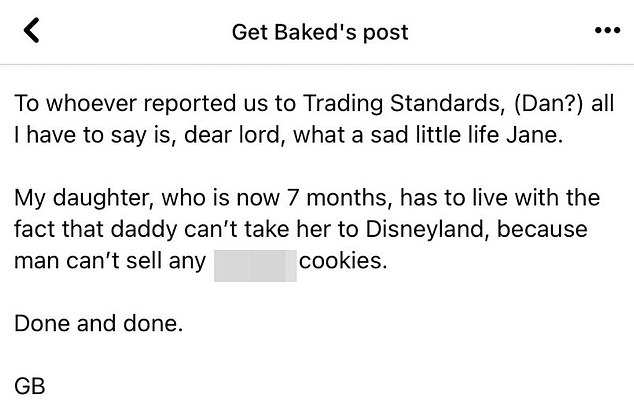 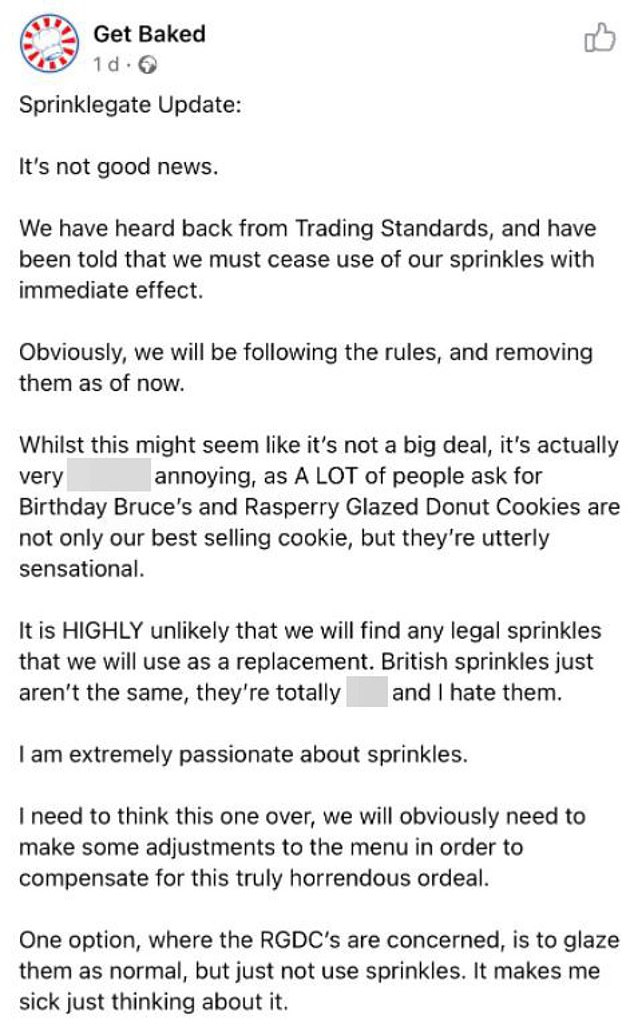 The bakery added: ‘It is highly unlikely that we will find any legal sprinkles that we will use as a replacement. British sprinkles just aren’t the same, they’re totally s*** and I hate them. I am extremely passionate about sprinkles’

‘I shall advise you all of the necessary update when it has been received.

‘Until then, please forward any queries to your nearest pie dealership.’

The additive contains coal tar dye and is used in America as a cherry colouring in cake decorating and sprinkles.

The European Union has banned the use of E127 as an edible food colouring – other than in glace cherries.

Scientists have linked E127 to hyperactive children and behavioural problems.

Tests on mice have also shown the chemical can cause thyroid complaints and possibly tumours.

According to the NHS, parents should be careful with artificial colourings in their children’s food as they can cause behavioural problems.

Many colours which are legal in the United States are banned across Europe because of potential health threats.

Customers of the shop in the suburb of Headingley were later informed: ‘Sprinklegate Update: It’s not good news.

‘We have heard back from Trading Standards, and have been told that we must cease use of our sprinkles with immediate effect.

‘Obviously, we will be following the rules, and removing them as of now.

‘Whilst this might seem like it’s not a big deal, it’s actually very f******* annoying, as A LOT of people ask for Birthday Bruces and Rasperry Glazed Donut Cookies are not only our best selling cookie, but they’re utterly sensational.

‘British sprinkles just aren’t the same, they’re totally s*** and I hate them.

‘I am extremely passionate about sprinkles.

‘I need to think this one over, we will obviously need to make some adjustments to the menu in order to compensate for this truly horrendous ordeal.

‘One option is to glaze them as normal, but just not use sprinkles. It makes me sick just thinking about it.

‘To whoever reported us to Trading Standards, (Dan?) all I have to say is, dear lord, what a sad little life Jane.

‘My daughter, who is now seven months, has to live with the fact that daddy can’t take her to Disneyland, because man can’t sell any f****** cookies.’

They later added: ‘Sprinklegate has been an unpleasant journey. No one can deny the turmoil that has ensued ever since that fateful visit from the man in a boring tie.’

Explaining in the comments section, the bakery expanded on what had happened, saying: ‘The sprinkles are imported from the USA and may contain colourings that aren’t allowed over here.

‘I am only prepared to use them and no others. If I can’t use them, I won’t use any.

‘I will be on sprinkle strike and won’t budge for no man.’

Customers rallied round the shop, which receives rave reviews for its astonishing range of unusual cakes and treats.

One said: ‘Who tf even buys a cake and inspects the sprinkles to check if they’re legal?!

‘I didn’t even know this was a thing lmao. What an absolute sad act they must be!’

Another said: ‘If I want to eat E number and sort tobacco that is MY prerogative. Don’t want no government taking my E numbers.’

And another joked: ‘Crack is illegal too but it doesn’t appear to stop a large proportion of Leeds from buying it. (Not me. Say no to drugs kids.)

‘Meanwhile you cannot buy sprinkles. But can get off your head on hardcore drugs without trading standards worrying. Makes sense.’

Lastly another gutted customer said: ‘But E-numbers are the backbone of this society..(Pre-Jamie Oliver era)..

‘E numbers are the only reason to drink irnbru.’

MailOnline has approached West Yorkshire Trading Standards for a comment.

Woman, Her Husband and Her Son Charged After a Security Guard Was Allegedly Shot Over Mask Dispute

Jerusalem's Holy Sepulchre reopens: 'This is a victory'