Banksy mural leaves Wales as local council says its English owner demanded £100,000 a year not to move it

A mural by the secretive street artist Banksy has been taken out of Wales after its English owner demanded £100,000 a year not to move it, sparking a row with the local authority.

Season’s Greetings, which depicts a message about the impact of pollution on communities, appeared on the outside of a steelworker’s private garage in Taibach, Port Talbot, on December 19, 2018.

Showing a child playing in the falling ash and smoke from a fire in a skip, the mural was then put on display in an empty shop window in Ty’r Orsaf, where it remained for four years.

The Banksy artwork has now been removed by its owner John Brandler and is due to be transported to England.

Mr Brandler today said he wanted the artwork to remain in the town and blamed the controversial move on Neath Port Talbot Council who he claims sent him a letter last year asking him to ‘take it away’.

However, the local authority said it had been in discussions about keeping the piece in the town but Mr Brandler had demanded a yearly six-figure sum for the loan of the mural.

It is understood the mural will go on show at the University of Suffolk in Ipswich. 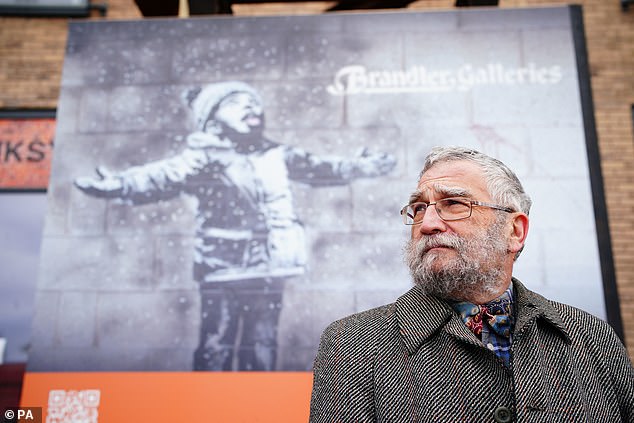 John Brandler, the owner of Season’s Greetings by street artist Banksy, observes the artwork’s removal from a retail unit at Ty’r Orsaf, Port Talbot, prior to its journey to a temporary storage unit at an undisclosed location following attempts by ‘fanatics’ to damage the artwork 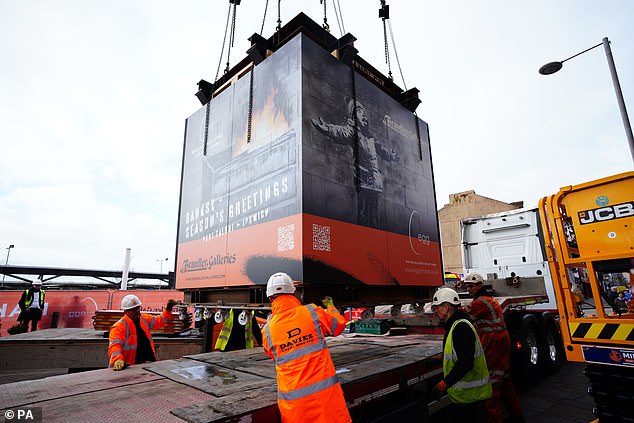 Workers use a crane to lift a crate containing the famous artwork before driving it away. It is understood the mural will go on show at the University of Suffolk in Ipswich

Mr Brandler said: ‘I wanted it to stay in the town, and when I bought it that was one of the conditions of me buying it.

‘I wasn’t the biggest offer the owner had but I came up with the idea of lending it to the town and I said it should stay here for at least three years.

‘And then at the end of last year, I got a letter from the council saying “right, your three years are up now take it away”. I was quite happy to leave it here.

‘What a missed opportunity for the town, 150,000 people coming here need tea, coffee, beers, sandwiches, everything.

‘Everyone I spoke to in the town wanted it to happen, shop keepers, taxi drivers, but the authorities didn’t want it to happen.’

Mr Brandler, a collector of Banksy art work since 2003 who owns four of Banksy’s wall art pieces to date, has been open about his fraught relationship with the artist but said he is the ‘essence of street art’.

Asked what Banksy would think of his artwork being moved from the town, Mr Brandler said: ‘I think he would be ambivalent about what’s going on today, because he knows I’m trying to preserve it and he knows I want it to be seen by a wider audience.’

The mock Christmas scene, created using stencils and spray paint, includes a dumpster fire next to a child with a sledge who is trying to catch falling snow on their tongue.

The snow in the mural is black dust, a by-product of steel production, from the town’s steelworks. This fell heavily in the summer of 2018.

There has been criticism of the decision to move the artwork, with many seeing it as a ‘missed opportunity’ to boost tourism in the town.

Local artist ‘K’, who publishes work under the name Scruffy Trainers, said the work had been a symbol of ‘hope’ for the town and that its removal had ‘raised emotions’.

She said: ‘This type of thing doesn’t happen very often in Port Talbot so it’s pretty sad to see it go. I think it gave people hope. So I think, naturally, its going has raised emotions.

‘It’s the only Banksy in Wales, but I think it’ll come back. And I think it will travel and tour the country, and take the story of Port Talbot with it, and I think that is a positive.’ 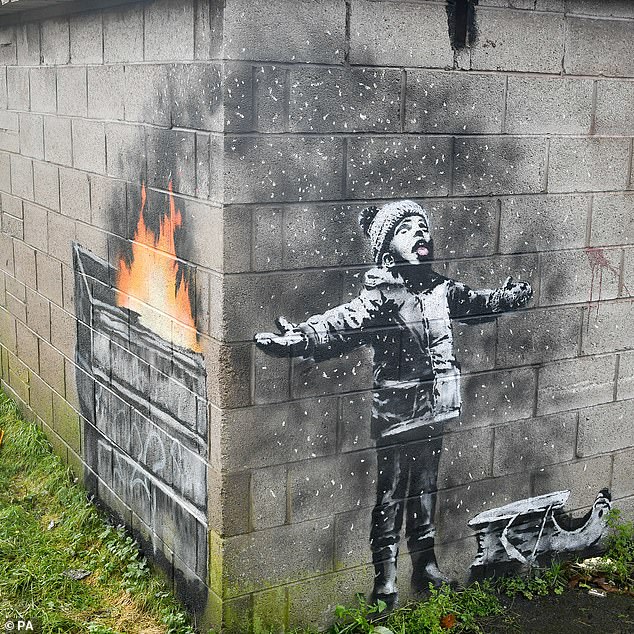 A North Port Talbot Council spokesperson said: ‘The council was informed it would have to meet the costs of its removal and installation into a new venue, to continue to cover the insurance and to pay a fee in the region of £100,000 per year for the loan of the work.’

The cost of relocation of the artwork was estimated to be around £50,000, the council said.

‘The future of the artwork is now in the hands of its owner, Mr Brandler’, it added.

Mr Brandler, who owns Brandler Galleries in Brentwood, Essex, said he had wanted to set up a street art museum in the Welsh town, exhibiting Banksy works and the works of other famous artists and drawing hundreds of thousands of visitors to the area.

But he also claimed ‘fanatics’ and ‘vandals’ have tried to destroy the piece and moving it out of Wales would ensure it would be preserved for future generations.

In January, Banksy fan Michael Thomas, 42, was given a 14-month prison sentence suspended for two years after trying to destroy the £500,000 piece of artwork to stop it being moved to England.

He tried to smash his way into the temporary building where it was being housed in order to spray it with white paint. 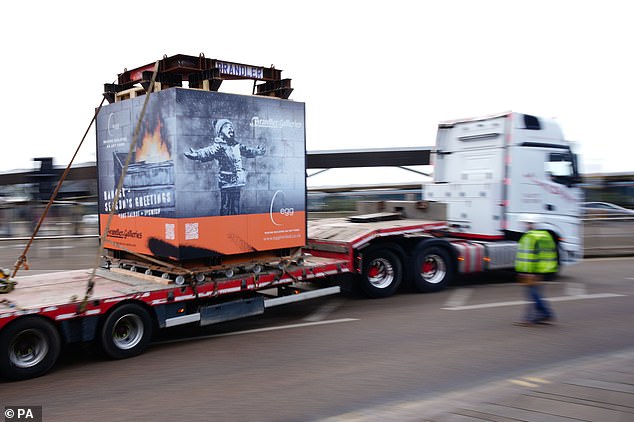 The artwork was driven away from Port Talbot, in Wales, after owner John Brandler said North Port Talbot Council wrote a letter telling him to ‘take it away’. But the council said Mr Brandler had demanded a yearly six-figure sum for the loan of the mural

Prosecutor Sian Cotter said: ‘Witnesses heard him saying: ”It’s the only thing in Port Talbot and they are taking it away.”

‘Thomas intended to destroy the painting so that no one else could have it.’

In 2018, steelworker Ian Lewis, 55, said it was like ‘Christmas had come early’ after the work appeared on the side of his garage.

The Banksy Preservation Society now aims to raise enough funds through selling exclusive Banksy Non-fungible token (NFT) Art drops to buy Season’s Greetings from Mr Brandler in order to ensure it will be on display to the public.

If the scheme is successful, those who buy the NFTs will be able to have a say over where the original is exhibited.

Lucy Cowley, from the organisation, said: ‘The reason the society was founded was to being Banksy work from a private collection back into the public.

‘Those who purchase an NFT will get membership to the society which will allow them a vote as to where it goes.

‘And, who knows? If the public voted that they wanted it back in Wales, it would come back to Wales.’

What types of income aren’t taxable?