A new book contends that Barack Obama privately called Donald Trump a “madman” and a “racist, sexist pig” in candid remarks to donors.

The 44th president, who has been much more reserved in his criticism of his successor in public, shared his thoughts shortly after Trump was elected. 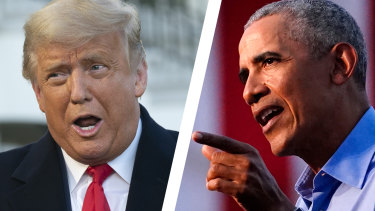 Obama called his successor a “madman” among other things.Credit:AP

The comments are reported in Battle for the Soul: Inside the Democrats’ Campaigns to Defeat Donald Trump by Edward-Isaac Dovere, a staff writer at the Atlantic magazine.

Dovere claims in the book, which will be published next week, that Obama preferred Trump as president over rival Ted Cruz, believing that the hard-right Texas senator would take the country in a dangerous direction.

However, he is said to have promptly changed his mind after the businessman took office in 2017.

“He’s a madman,” Dovere reports Obama telling “big donors looking to squeeze a reaction out of him in exchange for the big checks they were writing to his foundation”. 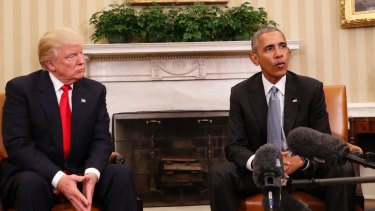 Barack Obama hosted Donald Trump in the White House soon after the 2016 election.Credit:AP

“More often: ‘I didn’t think it would be this bad.’ Sometimes: ‘I didn’t think we’d have a racist, sexist pig.’ Depending on the outrage of the day… a passing ‘that f—ing lunatic’ with a shake of his head.”

Obama’s strongest remark was said to have been prompted by reports that Trump was speaking to foreign leaders – including Russian President Vladimir Putin, amid the investigation of Russian election interference – without any aides on the call.

“‘That corrupt motherf—er,’ he remarked.”

There is no love lost between the pair. Trump questioned Obama’s citizenship, leading to what became known as the birther row.

The book also reports that Obama had concerns after his vice-president, Joe Biden, running for office so late in life.

Dovere claims Obama voiced doubts that 79-year-old Biden was too old and perhaps past his best.

Biden, on the other hand, felt that the Obama administration did not do enough to reach out to working class Americans, which helped give rise to Trump’s victory in the 2016 election.

French teacher who warned of radical Islam is under police protection