The bubonic plague is making a comeback due to climate change, warned Russia’s top doctor today.

She warned of the threat posed by the Black Death, claiming its return was a ‘risk’ to public health because of global warming.

‘We do see that the borders of plague hotspots have been changing with global warming and climate change, and other anthropogenic effects on the environment.,’ she said.

‘We are aware that cases of plague in the world have been growing.

‘This is one of the risks on today’s agenda.’ 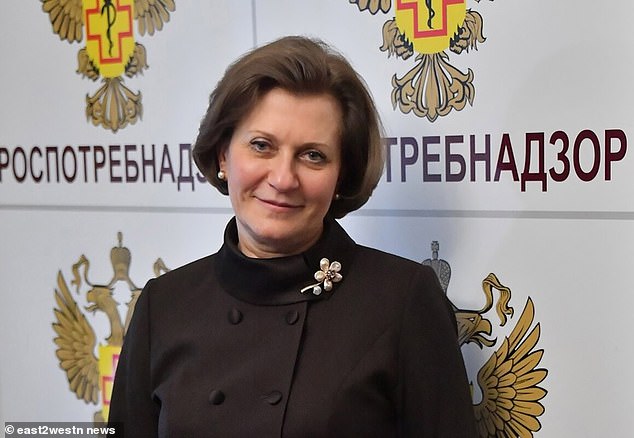 Russian doctor Dr Anna Popova (pictured) has warned of the threat posed by the Black Death, claiming its return was a ‘risk’ to public health because of global warming

A rapid response to outbreaks in fleas was essential to stop the spread to humans, said Dr Anna Popova.

Up to 200 million people were killed by the plague – also known as the Black Death – in the 14th century, wiping out 60 per cent of the population of Europe at the time.

Russia and China have seen outbreaks in recent years, and so has the US.

The United Nations Children’s Fund UNICEF warned in August about its resurgence in Africa.

A month earlier the discovery of bubonic plague led to the the cancellation of the Mongolian leg of the Silk Way Rally.

The country has suffered a number of outbreaks in recent years. 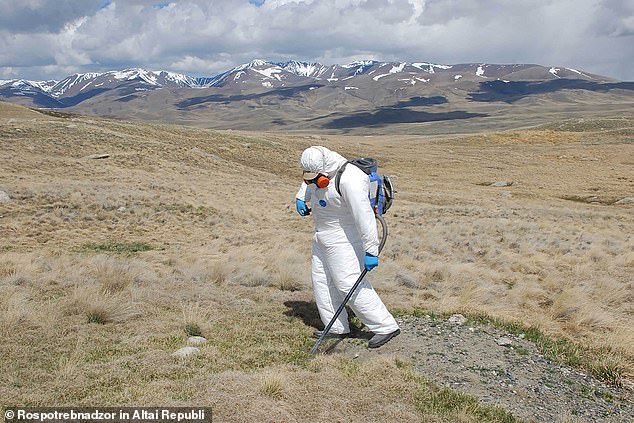 A rapid response to outbreaks in fleas was essential to stop the spread to humans, said Dr Anna Popova. Pictured: Anti-plague processing in Russia’s Kosh-Agach district

Russia last year took major steps to stop a spread of the Black Death across its frontiers with Mongolia and China.

Tens of thousands of people were vaccinated in border areas in the Tuva and Altai republics of Siberia as the country simultaneously fought Covid-19.

One outbreak was recorded on the Ukok plateau of the Altai Mountains in Russia – for the first time in more than 60 years.

Bubonic plague is a bacterial disease spread by fleas living on wild rodents and can kill an adult in less than 24 hours if not treated in time.

What is the bubonic plague?

Bubonic plague is the most common form of plague and is spread by the bite of an infected flea. The infection spreads to immune glands called lymph nodes, causing them to become swollen and painful and may progress to open sores. Human-to-human transmission of bubonic plague is rare and it’s usually caught from animals.

If plague infects the lungs – either by the bubonic form progression through the body or by catching the infection from an infected patient or animal’s breath – it is called pneumonic plague.

Historically, plague was responsible for widespread pandemics with high mortality.

People infected with plague usually develop acute febrile disease with other non-specific systemic symptoms after an incubation period of one to seven days, such as sudden onset of fever, chills, head and body aches, and weakness, vomiting and nausea.

It was known as the ‘Black Death’ during the fourteenth century, causing more than 50 million deaths in Europe.

Nowadays, plague is easily treated with antibiotics and the use of standard precautions to prevent acquiring infection.

As an animal disease, plague is found in all continents, except Oceania. There is a risk of human plague wherever the presence of plague natural foci and human population co-exist.

The three most endemic countries are the Democratic Republic of Congo, Madagascar, and Peru. In Madagascar, cases of bubonic plague are reported nearly every year, between September and April.

WHO does not recommend vaccination, except for high-risk groups (such as laboratory personnel who are constantly exposed to the risk of contamination, and health care workers).