Dozens of women have had their social media accounts hacked and their intimate photos used against them, as part of a long-running scam Victoria Police are cracking down on.

Cybercrime squad detectives are investigating a scam where offenders use hacked social media accounts to gain access to accounts and hunt for sensitive data, like intimate photos and videos, to blackmail women. 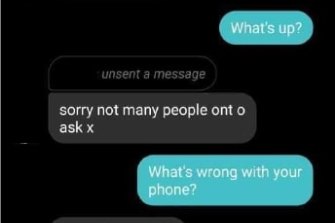 A message sent in the scam. Credit:Victoria Police

Police said the victims are often contacted by a friend, who say they are locked out of their social media account and have nominated them to receive a verification code to unlock it.

When the victims receive the code, though, it unlocks their account. Once their account is unlocked, the offender searches it for compromising or intimate images, or other material they can use to blackmail the victims.

Offenders then might use images to blackmail victims into giving them more intimate images or to get them to move onto other online platforms.

Detectives have linked one alleged perpetrator of the scam to at least 34 women since mid-2019. Police said it appeared the victims do not know the offender.

In a screen-shot shared by Victoria Police, a social media user confronts an alleged offender, saying: “I’m sure you know that everyone on her friends’ list knows she’s been hacked”.

The alleged offender responds: “For every 5 that know 1 doesn’t and when you spam it out the odds are in my favour … [sic]”

In a statement, Victoria Police said social media users should never pass on authentication codes for an account. If they receive a request from a friend asking them as much, they should call them to make sure the request is authentic. 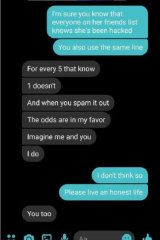 People should also not help anyone get access to a social media account, even if the person appears to be someone they know or a friend.

Cybercrime squad Detective Inspector Boris Buick said: “If you are subject to any type of concerning behaviour like this online, we would urge you to contact police and discuss the circumstances with us.

“Anyone who contacts police will be supported and treated with respect, courtesy and dignity.

“We believe that these matters are underreported and that can be for a range of reasons, including fear or embarrassment, and sometimes feeling unsure if an offence has occurred or if they will be believed.”

“We believe that these matters are underreported and that can be for a range of reasons, including fear or embarrassment.”

Inspector Buick said people who choose to share intimate images through their social media accounts should make their privacy settings are as stringent as possible.

Police were urging anyone with information about the scam to come forward.

Trump threatens action on big tech as Zuckerberg, Bezos, Cook and Google CEO are to testify at historic hearing

Tx. Man Is Fatally Shot by Police, and Witnesses Say He Was Breaking Up Domestic Incident