Boris Johnson could unveil terms of ‘full, proper public inquiry’ into No10’s handling of Covid as soon as TODAY

Boris Johnson could lay out plans for a judge-led public inquiry into the UK’s coronavirus response in a speech today.

The Government’s handling of the pandemic will be scrutinised in a ‘full, proper public inquiry’ that will drill into what was done and when, and what went wrong.

The PM reportedly had a meeting of the Covid-O committee this morning to iron out the details of the inquiry and who will run it, and he could announce them in a statement to Parliament at 12.30pm, sources say.

In the House of Commons yesterday, Mr Johnson committed to starting the inquiry ‘within this session’ of Parliament – a Parliamentary session usually lasts around a year.

Investigations will likely take years – the Chilcot inquiry into the Iraq war wasn’t published for seven years after it began – and may paint Mr Johnson’s government in a dim light after it faced criticism for being too slow to lock down the country.

The report would likely not be published before the next general election, which is currently set to take place in 2024.

No10’s former chief aide Dominic Cummings has already branded the Department of Health a ‘smoking ruin’ and vowed to spill the beans on Downing Street in a meeting set with MPs later this month.

Experts will explore the chain of events that led to the deaths of more than 127,000 people since the pandemic began, with 20 per cent more care home residents dying than in a normal year.

England’s national lockdown will ease even further from next Monday with indoor socialising, overnight stays, restaurant dining and holidays all back on the cards.

Another 2,474 positive tests were announced in the UK yesterday along with 20 deaths. 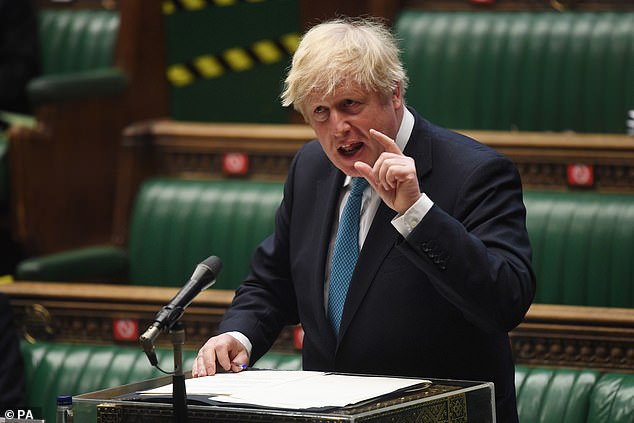 The PM may be laying out his own timeline and terms for an inquiry in a bid to look proactive instead of having one thrust upon him by angry MPs, according to ITV’s Robert Peston 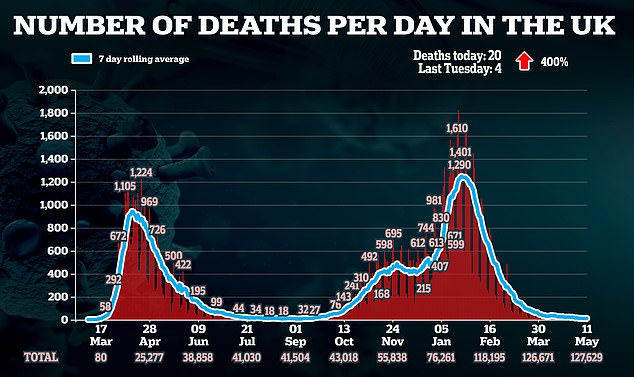 Mr Johnson said in Parliament yesterday: ‘I have made that clear before… I do believe it’s essential we have a full, proper public inquiry into the Covid pandemic.’

The full public inquiry will likely mean hearing from many witnesses in different parts of government and the health service to find out how well they coped with Covid.

NHS and care staff could air grievances about shortages of masks, gloves and aprons at the start of the outbreak.

The PPE scandal left some hospital workers wearing bin bags to try and protect themselves or wearing the same masks for longer than they should.

The care home sector said during the first wave that the government was failing to supply PPE as promised, risking further outbreaks in the already-crippled industry.

And Government insiders will shed light on the decisions that led to each of the UK’s three lockdowns.

Mr Johnson has been criticised for being too slow to act in March last year and again in the autumn, when scientists called for a lockdown weeks before one was announced in November.

DOMINIC CUMMINGS TO LIFT LID ON NO.10 IN SECOND MEETING WITH MPs IN MAY

Dominic Cummings could confirm Boris Johnson and the Government pursued a strategy of ‘herd immunity’ before the first coronavirus lockdown last March when he gives evidence to MPs this month.

Mr Cummings is due to be grilled on the Government’s response to the pandemic by a joint session of the health and science select committees on May 26.

Downing Street will be on red alert ahead of his appearance amid a bitter briefing war between the PM and his former chief aide.

Reports suggested that Mr Cummings could use his appearance to discuss whether ‘herd immunity’ was ever an official Government strategy.

In a session on March 17, Cummings branded Whitehall a ‘disaster zone’ and said bureaucracy ‘destroys’ effective operations and ‘drives out’ the best people in the government.

In a brutal assault on Mr Hancock and his department, Mr Cummings said the PPE and therapeutics efforts were a ‘smoking ruin’.

Public Health England’s lack of available testing capacity – which made it almost impossible for anyone to get tested in the first wave – will likely come under fire.

The PM may be laying out his own timeline and terms for an inquiry in a bid to look proactive instead of having one thrust upon him by angry MPs, according to ITV’s Robert Peston.

Liberal Democrat leader Ed Davey has already called for it to be accelerated ‘on behalf of bereaved families across the country’.

But the epidemic is still going on and the Government said last month that ‘the very people who would need to give evidence to an inquiry are working round the clock,’ The Guardian reported.

Dominic Cummings could be one of the figures most dangerous to Mr Johnson in any inquiry because of the access he had behind the doors of Number 10.

He already has a date set for his next meeting with MPs on the Health and Social Care Committee – May 26 – after making bombshell claims in the first.

In a session on March 17, Cummings branded Whitehall a ‘disaster zone’ and said bureaucracy ‘destroys’ effective operations and ‘drives out’ the best people in the government.

In a brutal assault on Mr Hancock and his department, Mr Cummings said the PPE and therapeutics efforts were a ‘smoking ruin’.

‘It’s not coincidental that the vaccine programme worked the way that it did. To do that we had to take it out of the DoH, we had to have it authorised very directly by the PM and strip away all the normal nonsense that we can see is holding back funding therapeutics…

‘No10 took it out of the Department of Health.’

He went on: ‘In spring 2020 you have a situation where DoH was just a smoking ruin in terms of procurement and PPE and all of that.

‘You had serious problems with the funding bureaucracy for therapeutics on Covid. So that was the kind of context for it.

‘Patrick Vallance then came to No10 and said this shouldn’t be run out of the Department for Health, we should create a separate task force.

‘We also had the EU proposal which looked like an absolute guaranteed programme to fail debacle.

US records 1,000 COVID deaths in a day for first time since May