The chief executive of Victoria’s gaming watchdog has resigned amid a major overhaul of the embattled regulator, which has been widely criticised over its lax oversight of Crown casino.

Victorian Commission for Gambling and Liquor Regulation chief executive Catherine Myers abruptly ended her role with the commission on November 19, after more than seven years in the position. 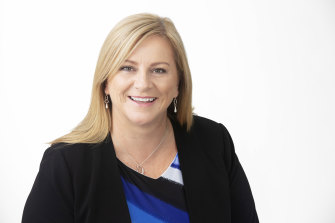 Victorian Commission for Gambling and Liquor Regulation chief executive Catherine Myers has announced she is stepping down.

Her departure follows a tumultuous period for the VCGLR, which will be replaced next year by the Victorian Gambling and Casino Control Commission and a new regulator for liquor licensing and compliance.

Ms Myers said it was appropriate to leave before the establishment of the new regulators, according to a statement on the VCGLR website on November 10.

The decision by the Andrews Government to restructure regulation of the gaming industry followed a litany of legal and ethical breaches by Crown Resorts, initially exposed in reports by The Age, The Sydney Morning Herald and 60 Minutes in 2019, and later by a NSW inquiry and a royal commission in Victoria.

Last month, Commissioner Ray Finkelstein recommended Crown be given two years to reform itself under the supervision of a government-appointed “special manager” in a report handed down in October.

“For many years, Crown Melbourne had engaged in conduct that is, in a word, disgraceful”, Commissioner Finkelstein’s report said.

The damning findings also raised concerns about the failure of the VCGLR and successive Victorian governments to hold Crown to account.

The Andrews government only called the royal commission after an independent inquiry in NSW last year found Crown was unfit to hold the licence for its new Sydney casino after widespread money laundering was uncovered at the Southbank gambling venue.

At the time, former gaming minister Tony Robinson said Victoria had been humiliated by the revelations raised by the NSW inquiry, and called for a stronger gambling watchdog to make sure it never happened again.

In July, the VCGLR was also accused of ignoring concerns raised about illegal activity at the casino by five former gaming inspectors turned whistleblowers on ABC’s Four Corners.

However, Ian Freckelton, QC, who led an independent investigation, could not substantiate those allegations in his report.

“Her experience leaves her highly regarded as a subject-matter expert and an exemplar public sector leader,” Mr Kennedy said.

A VCGLR spokesman said Ms Myers would be replaced by acting chief executive Scott May, who previously held the role of general counsel and executive director of regulatory policy and legal services.

“We will continue to deliver high-quality regulation of the gaming and liquor industries without disruption to regulatory activity as the new regulatory arrangements are established,” the spokesman said.

A government spokesman said it was working through the details of the transition to the new regulatory framework with the existing commission and, subject to passage of the bill, the new Victorian Gambling and Casino Control Commission was scheduled to formally come into existence on January 1, 2022.

Fashion label says Cuomo administration stiffed it out of $10.4M for pandemic PPE

How India Oxenberg Overcame Brainwashing, Sex Abuse in Nxivm — and Became an Advocate for Others