Parts of Britain face renewed flooding misery this week with gales and a week-long deluge of heavy rain expected as the freeze is set to give way to higher temperatures.

The Met Office said early cloud, rain and hill snow were likely today for South West England along with Northern Ireland and Wales. It comes after temperatures fell to -8C (18F) in the Scottish Highlands early this morning.

A yellow warning for ice was put in place for Northern Ireland with another across much of Wales and central England, while a warning for snow was issued for the North of England and into central Scotland.

Forecasters said up to 4in (10cm) could fall today over higher ground, most likely over the southern Grampian Mountains. Motorists were advised to take care on the roads, with icy patches likely on untreated surfaces.

Rain should stall over south and central Scotland later in the day as it accumulates in the country’s hills, and snow is likely later today over the Welsh mountains and in northern England. 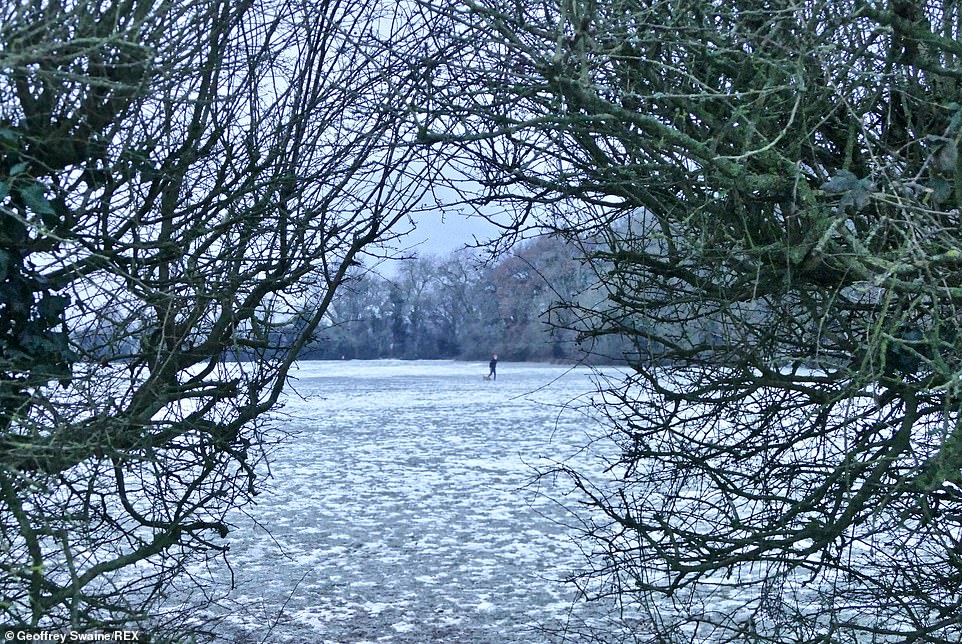 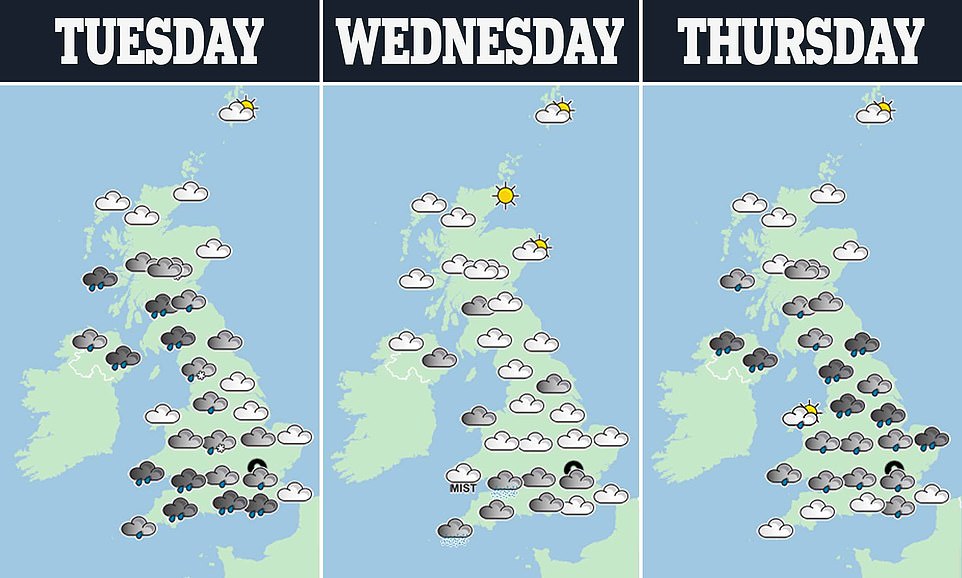 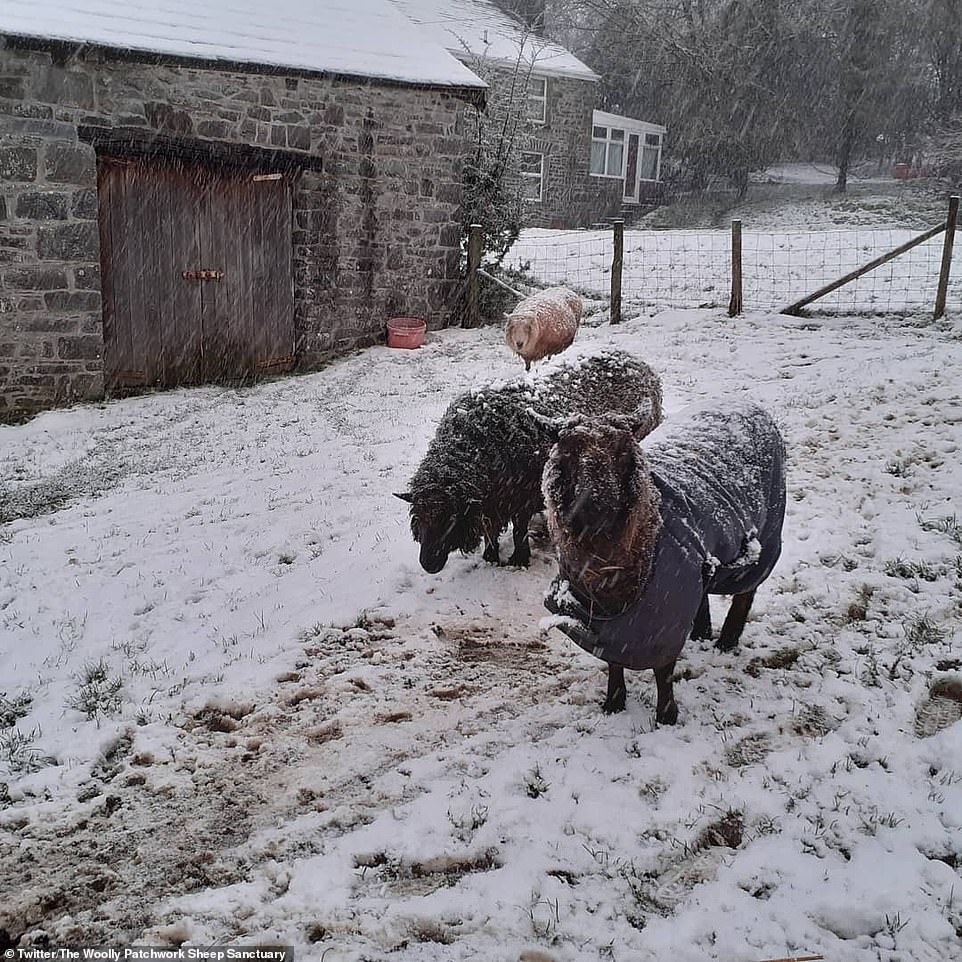 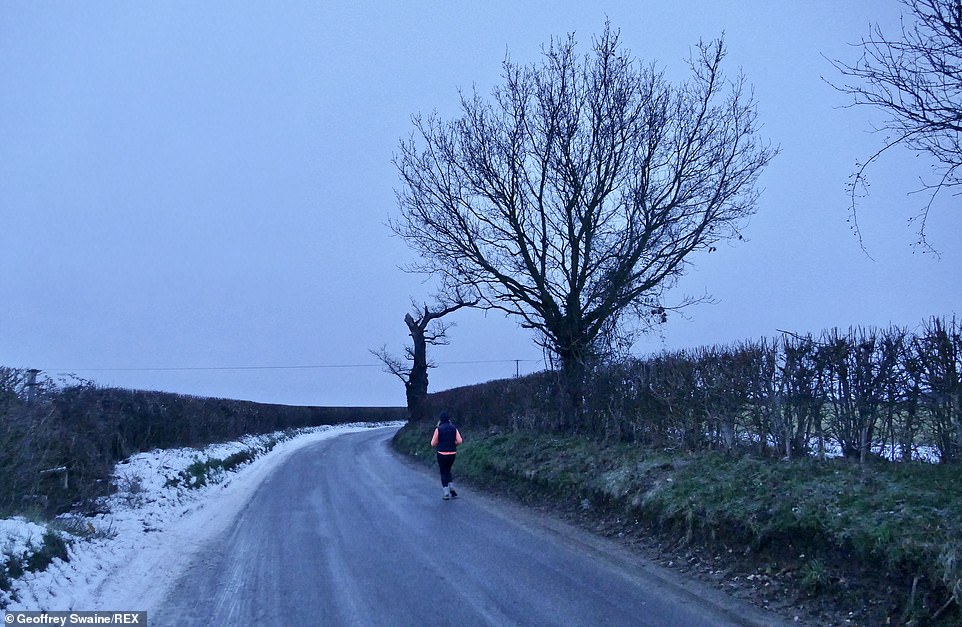 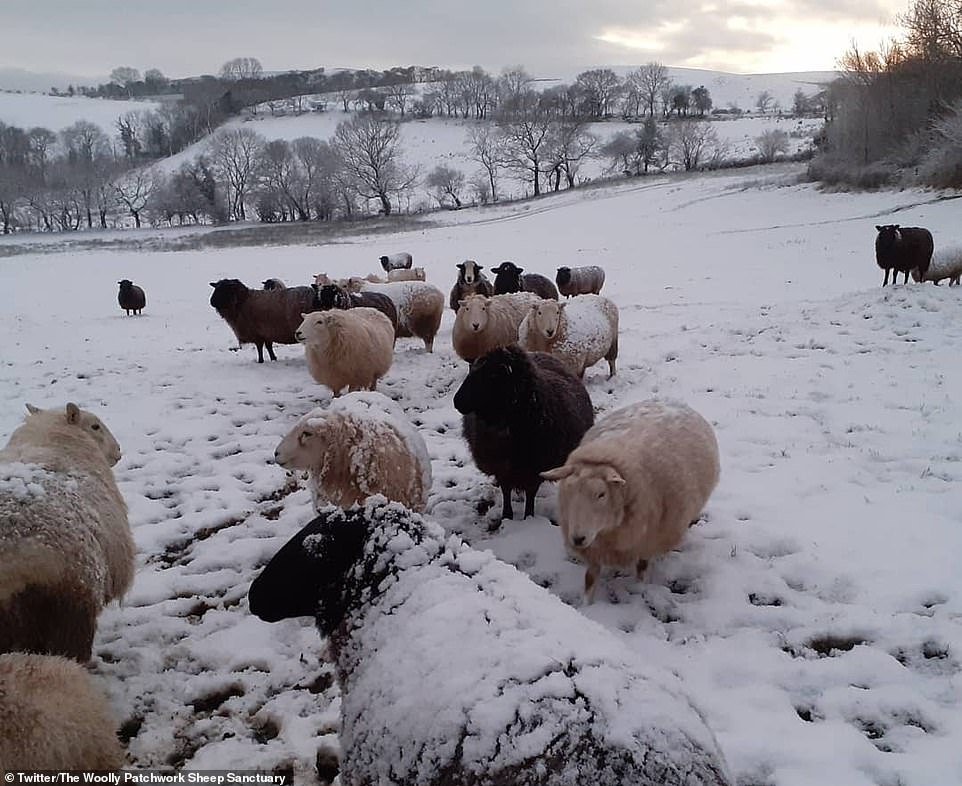 Snow falls on sheep at a farm in Lampeter, Wales, this morning with the Met Office issuing further weather warnings

The rest of week is predicted to be milder, wetter and windier, while 51 flood alerts and 22 warnings are in place for England, along with a further alert and warning in Wales.

The milder air is due to push in tomorrow, sending temperatures from close to freezing to as high as 12C (54F) to 13C (55F) across central and southern areas – as mild as Nice, in the south of France, or Rome. 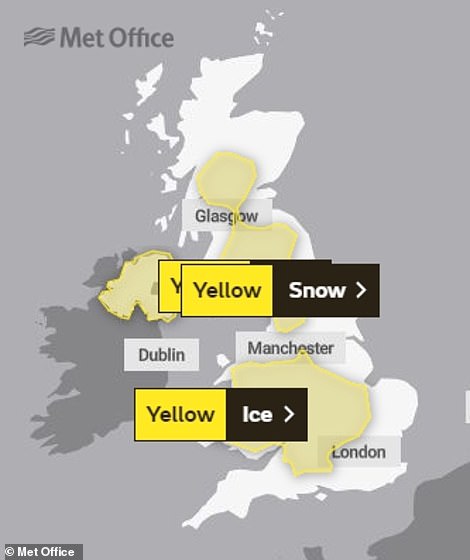 Weather warnings for snow and ice are in place for today

But the warmer air is also due to bring more wet and windy weather, raising a further spectre of flooding as land remains saturated from Storm Christoph last week, plus snow melt.

Areas deluged at the end of last week included parts of Wales, Cheshire, Merseyside, Greater Manchester and Herefordshire, where hundreds of homes were flooded.

Met Office forecaster Oli Claydon said: ‘The theme is for the weather to get more unsettled due to Atlantic air arriving. Most places will see a noticeable change.’

Mr Claydon said bands of wet weather between tomorrow and Friday could bring as much as 2in (50mm) more rain, especially in the West.

‘There is no indication there will be any more significant totals but with lots of saturated ground and snow melt, more rain is not welcome,’ Mr Claydon said.

The rain is due to be accompanied by strong winds, especially in South West England and Wales. Mr Claydon said that colder air may return for the weekend, bringing the chance of overnight frosts.

But there is unlikely to be at lengthy respite from the wind – expected to reach speeds of about 50mph – and rain.

Into the beginning of February, the Met Office said: ‘Unsettled conditions look likely to dominate for this period, with low pressure across the UK. 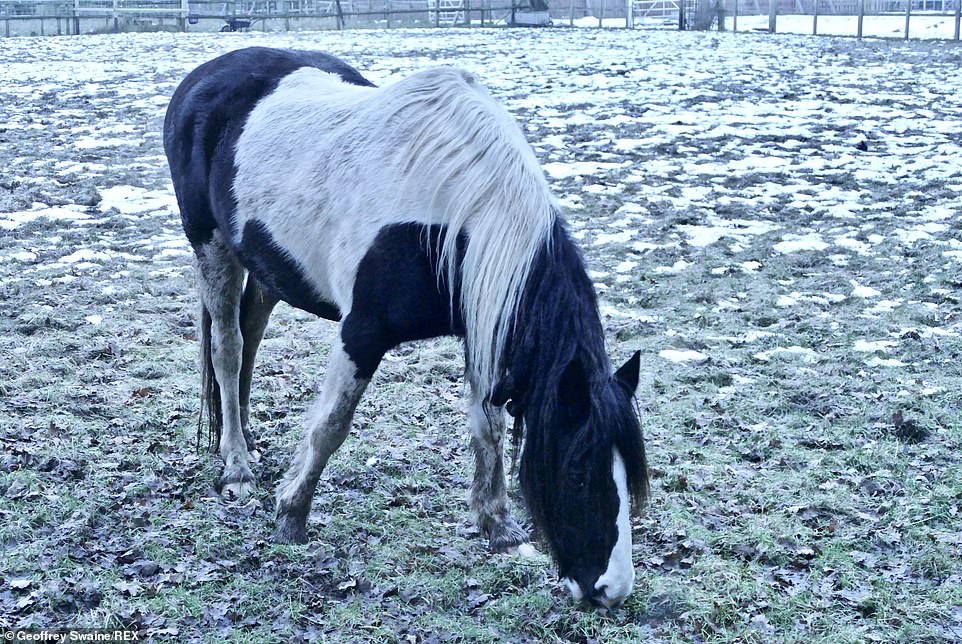 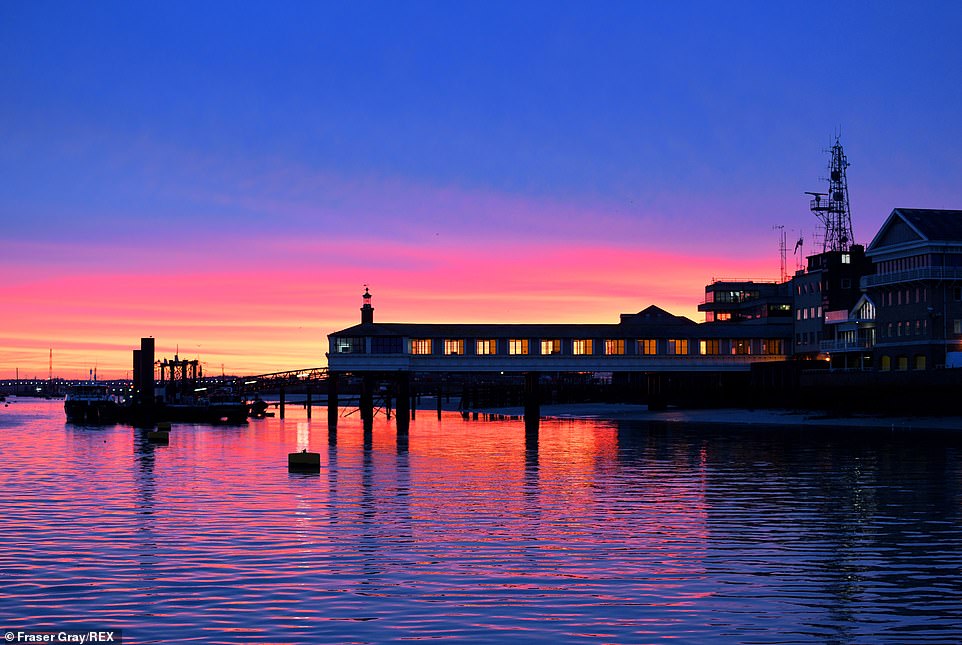 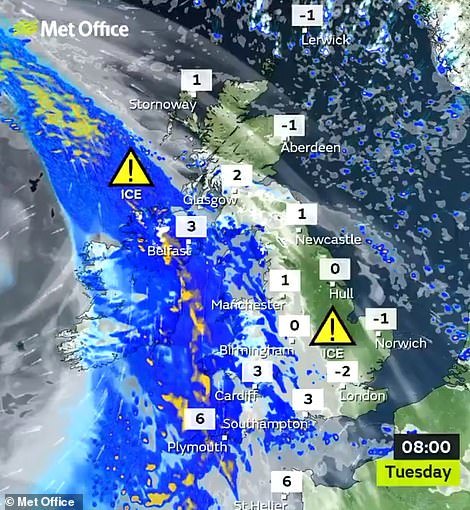 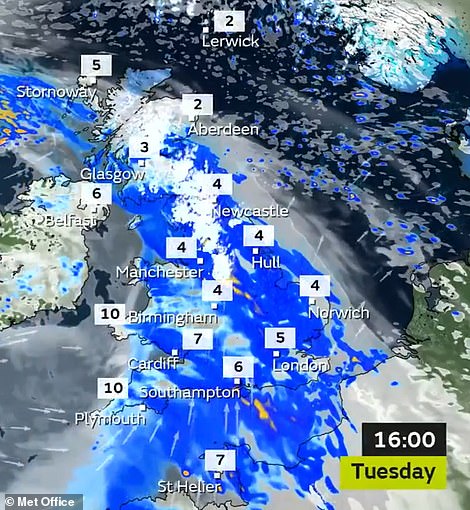 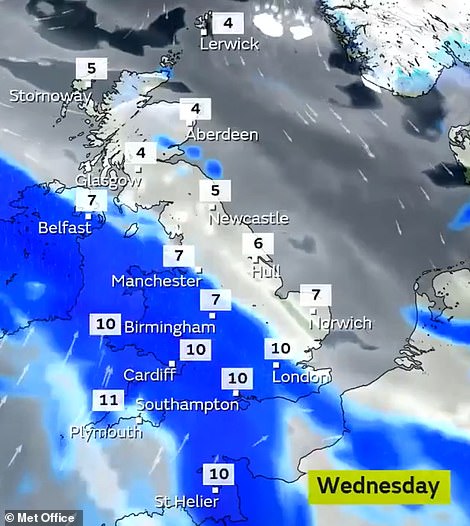 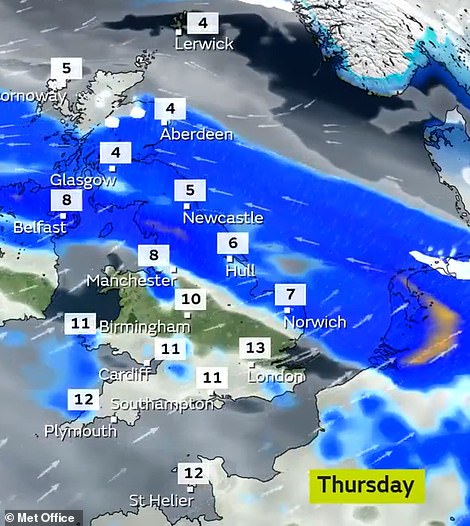 The Met Office said bands of wet weather between tomorrow and Friday could bring more heavy rain, especially in the West 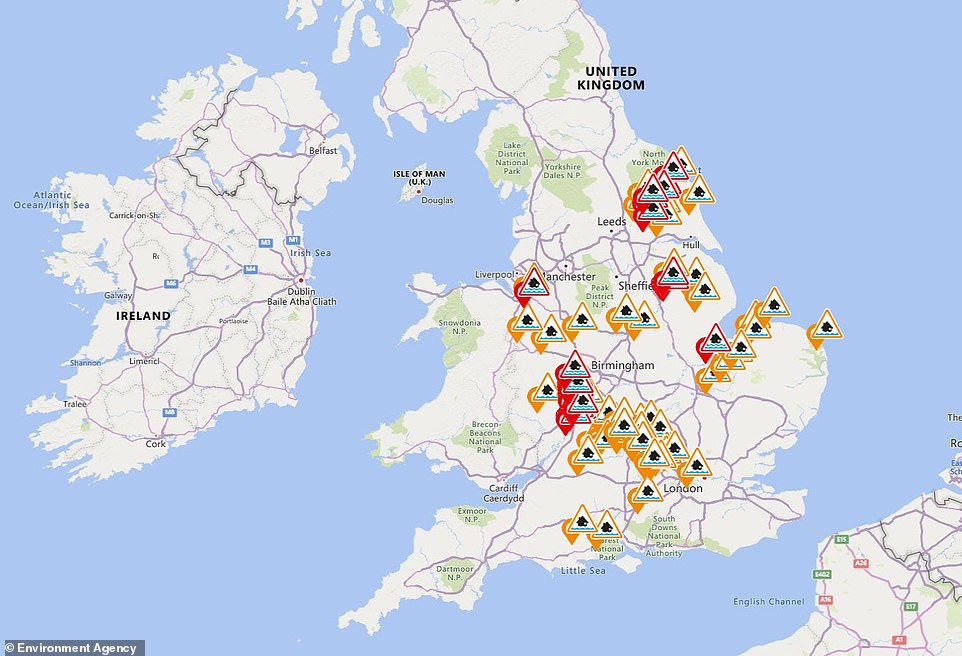 ‘Therefore, this should bring changeable weather to most of the country, with periods of rain, showers, and strong winds at times.’

The snowfall over the past few days has been the greatest for two years. Snow depths reached 6.3in (16cm) at Wittering in Lincolnshire on Sunday, and 3in (7.6cm) was recorded in Warwickshire and Bedfordshire the same day.

Up to 2in (5cm) of snow was recorded further west, in Powys, Shropshire, Gloucestershire. and Somerset. There were also flurries in London, with 0.4in (1cm) at Heathrow Airport.

Snow depths over the weekend were the biggest accumulations since 6.3in (16cm) was recorded in Somerset and County Durham on February 2, 2019.

Before Sunday’s snowfall in central and southern areas, there was heavy snow in northern areas on Saturday, with 5.9in (15cm) at Malham Tarm in North Yorkshire and 5.5in (14cm) at Hunt Hall Farm in County Durham.

Brexit latest: Army could be drafted to the Northern Ireland border in No Deal Brexit, Irish PM warns