British bonobo bullied by German apes finally begins to integrate – by getting himself a ‘cougar’ girlfriend from among the group, eight years his senior 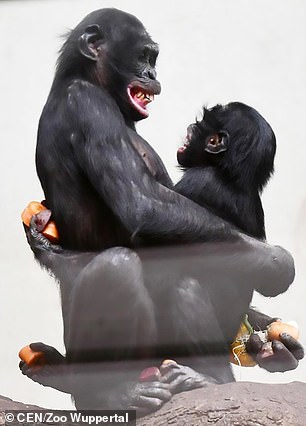 A British bonobo who was bullied and beaten up by German apes after arriving at their zoo has found himself a ‘cougar’ girlfriend eight years his senior.

Bili, aged 10, was pictured in an intimate moment with German great ape Mahdeblu at the zoo in Wuppertal, North Rhine-Westphalia.

The happy look on Bili’s face – as he makes love with Mahdeblu and hugs her daughter – is a world apart from the terror he faced just weeks ago when the aggressive German apes refused to accept him at the zoo.

The violence left the hapless British-born animal with bleeding wounds and part of his ear bitten off.

But the British ape is now close to Mahdeblu her five-year-old daughter Akeena, who he was seen hugging tightly.

The troop’s grandfather Mato, 55, has also accepted Bili and reportedly been seen playing with him in the bonobo enclosure.

A zoo spokesman said: ‘In the meantime, Bili looks much more relaxed overall. We could no longer observe any aggression against him lately.’

The repeated attacks on Bili even prompted 300,000 people to sign a petition calling for the bonobo’s return to Britain. 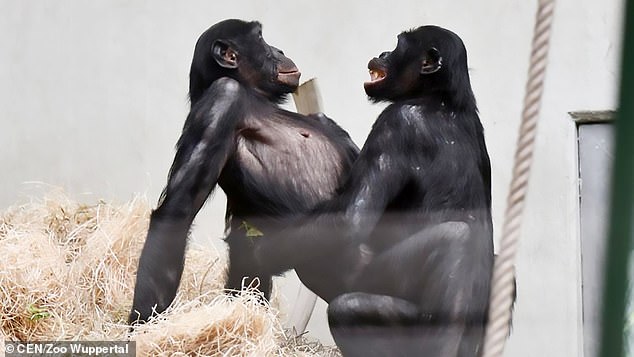 New love: Bili (right) shares an intimate moment with Mahdeblu, a German ape eight years older than him, at Wuppertal Zoo in Germany 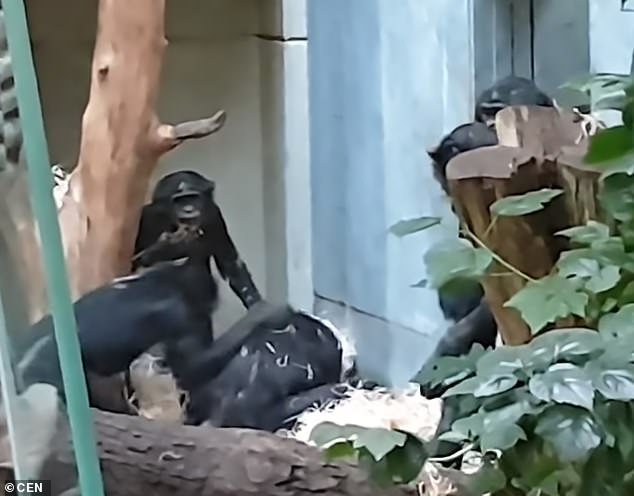 Aggression: In this violent scene Bonobo Bili is trying to protect himself on the ground while surrounded by the other apes in the troop who are attacking him

The German zookeepers, who even received death threats for their refusal to move Bili, had always said that the frequent attacks on Bili were natural and they emphasised he could still integrate perfectly in the troop if given time.

Wuppertal Zoo director Dr Arne Lawrenz said that people have a romanticised image of nature which makes them react angrily when confronted with violent episodes.

Dr Lawrenz said: ‘This is why there must be zoos, where we can show what nature really looks like.

‘That is our mission and that’s why we, as zoos, might be at a crossroads here. For example, in the U.S. there is a tendency to not exhibit bonobos because they are politically incorrect in terms of their sexual behaviour and aggression. 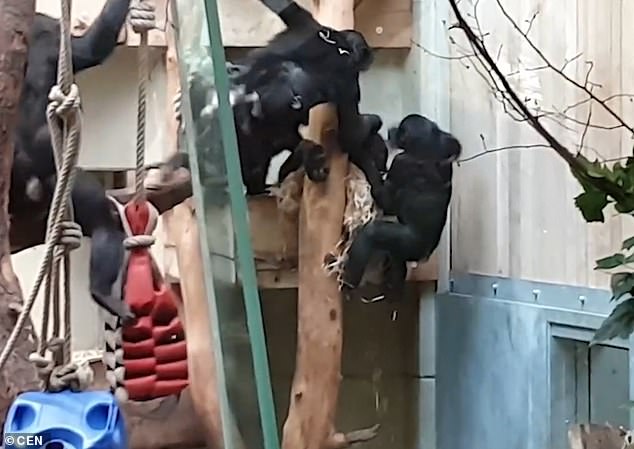 Victim: Bili was sitting on a platform in the bonobo enclosure at Wuppertal Zoo when he was violently pulled down and set upon by the pack 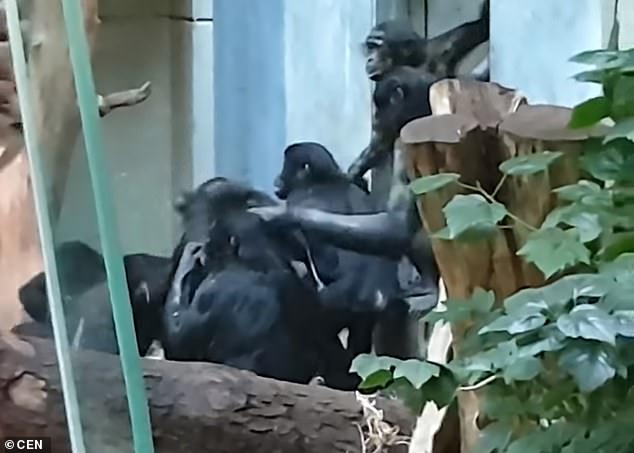 Attack: Almost the entire troop of bonobos is surrounding Bili who tries to make himself as small as possible in the back of the enclosure 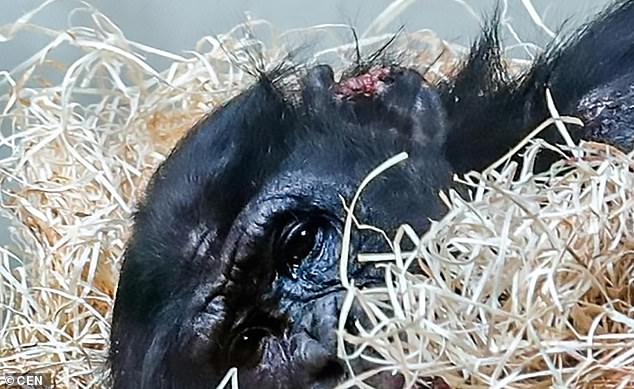 Bonobo Bili has even had part of his ear bitten off, and animal rights activists signed a petition calling for him to be sent back to England 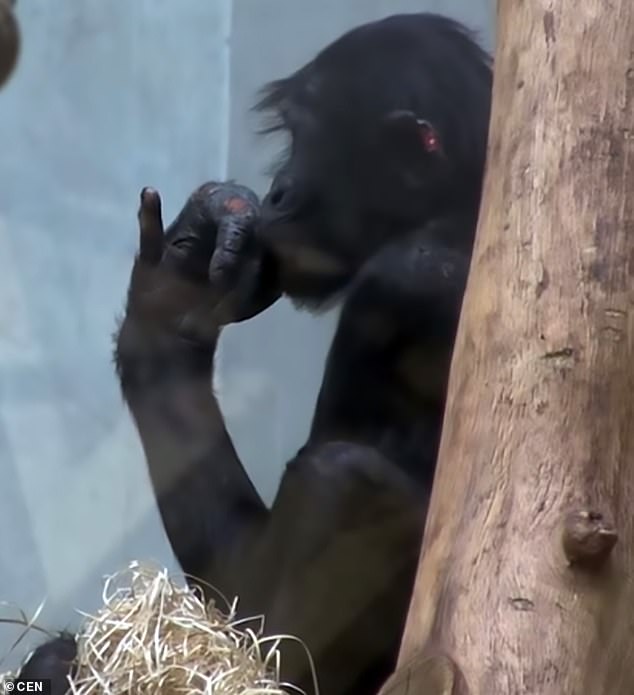 Bili was brought to Wuppertal Zoo for as part of a conservation programme as Bonobos are an endangered species, but can be seen here nursing open wounds

‘I believe that zoos need to show people that nature is not all about peace, love and harmony, and that it’s also about rivalry and that the animals are subject to different laws to humans.’

Bili’s difficult life began when his mother Maringa did not care for him properly after he was born in October 2008 in Twycross Zoo in Leicestershire.

In 2009 Bili was adopted by loving female chimps in Frankfurt who have experience dealing with unwanted youngsters.

However, despite being happy and well integrated he was sent to Wuppertal Zoo on the recommendation of the Specialist Group of the European Zoological Community and the European Conservation Breeding Programme. 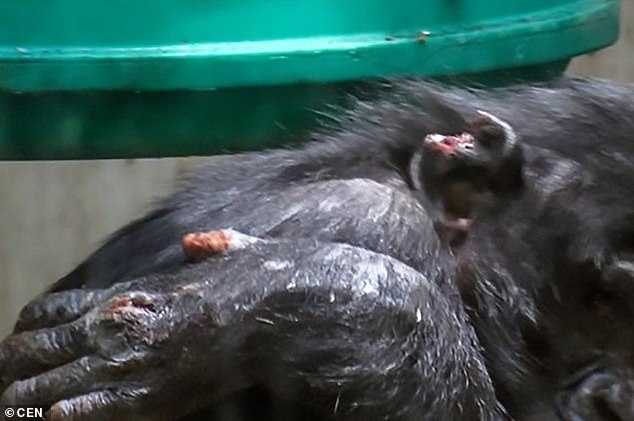 The petition ‘Save Bonobo Bili from Wuppertal Zoo’ was started by Petra Bente, who says he has been severely traumatised since being sent to the zoo in western Germany 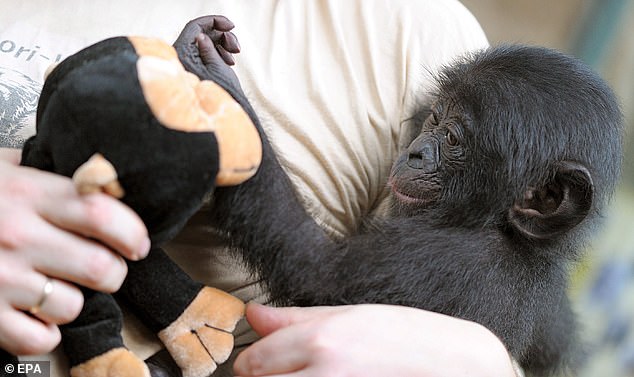 A promising start: Bili seen in 2009, aged four months, at the zoo in Frankfurt after his mother in England had abandoned him 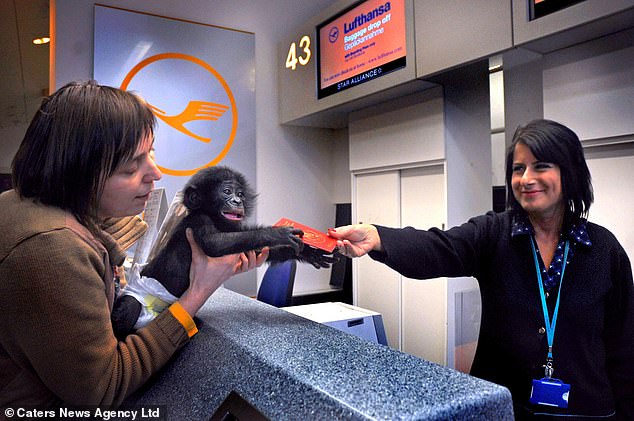 Bili travels from Birmingham to Germany in 2008: Grasping his ‘passport’ excitedly Bili and his keepers looked forward to him finding a better life in Germany