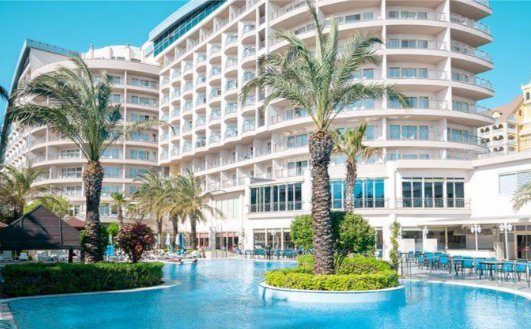 A British boy has drowned in a pool while staying at a hotel with his family for a wedding in Turkey.

The 14-year-old got into difficulty as he swam with his aunt at the five-star Liberty Lara beach hotel near Antalya on Sunday.

A hotel guest said the boy was dragged unconscious from the pool by a barman and given CPR before being rushed to hospital.

They claimed no lifeguard was around at the time, but a hotel spokesperson said this was ‘categorically untrue’.

The onlooker told The Sun: ‘They tried very hard to revive the boy at the side of the pool but it was too late. It’s so sad, particularly when you consider they were there for such a happy reason.’

After reviewing CCTV footage from the pool area, the hotel spokesperson said lifeguards were on the scene within 30 seconds.

They added they have an additional lifeguard to ensure their five pools are not left unattended when one takes a lunch break.

A Tui spokesperson said they have a team at the resort and are supporting the family ‘in whatever way we can’.

‘The safety and wellbeing of our customers is our primary concern and our dedicated resort team is supporting the authorities and hotel with their investigations,’ they added.

The Foreign Office said: ‘We are supporting the family of a British boy who has died in Turkey and are in contact with the local authorities.’