Magaluf’s last dance: The Brits who hit Spanish party resort for one last drink before its most popular bars SHUT to enforce social distancing after drunken tourists were filmed going on rampage

Britons partied in Magaluf’s Punta Ballena strip hours before it was shut down for the rest of the summer.

Tourists threw one last booze-fuelled party in the resort on the Spanish island of Majorca before its shock closure following earlier scenes of bad behaviour.

The closure – until at least September 15 – is being enforced after images and a video emerged of revellers jumping on cars and ignoring the island’s coronavirus social distancing regulations.

Two other party strips in Playa de Palma, south-east of the Majorcan capital Palma, have also been shut down, known locally as Ham Street and Beer Street – or calle del Jamon and calle de la Cerveza in Spanish.

The enforced closures will be disappointing for thousands of Britons who were set to make the journey because of the hive of bars and clubs. 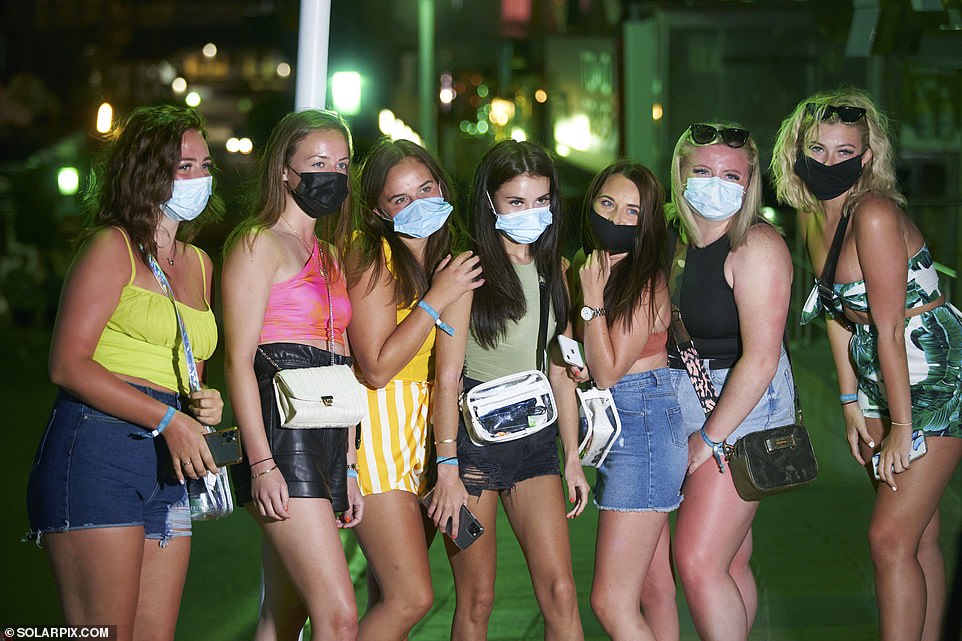 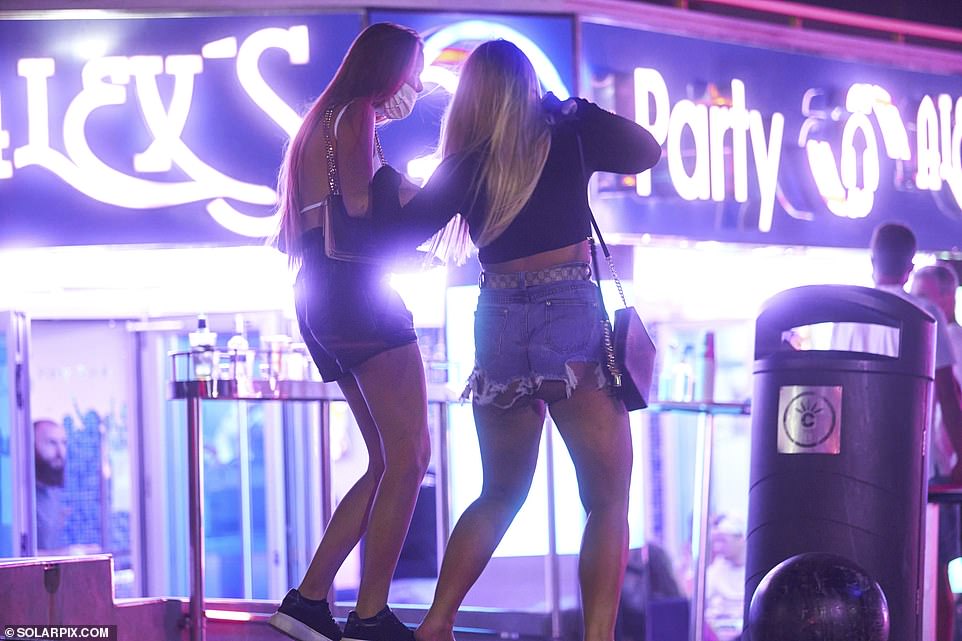 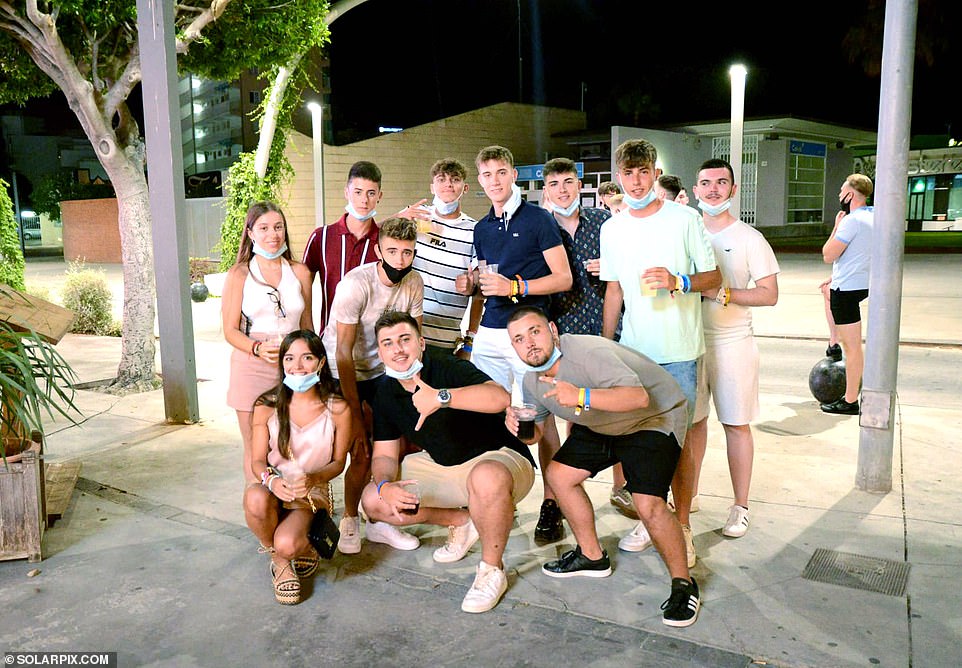 The closure is being enforced after images emerged of revellers jumping on cars and ignoring the island’s coronavirus social distancing regulations. Pictured: A group of revellers pose for a group photo on Wednesday

Later on in the early hours of Thursday, tourists locked out of their favourite holiday haunts were spotted with alcohol from supermarkets.

One man his Union Jack beach towel still draped round his neck as he walked along the road in a pair of bright orange shorts and flip-flops with a carrier bag in his right hand.

Elsewhere local police and Civil Guard maintained a visible presence in the area as officers went round businesses informing them about the closure decision.

The closures came as regional governors warned the tourists it blames for putting peoples’ health and the image of the Balearic Islands at risk: ‘Don’t try to take your party elsewhere on the islands.’ 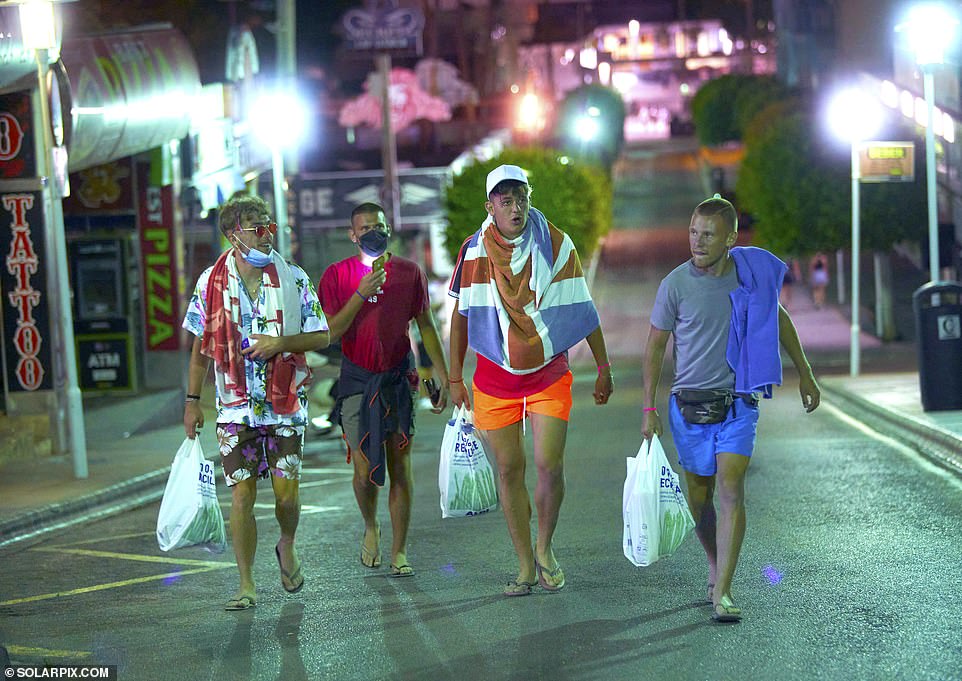 Later on in the evening on Wednesday, tourists locked out of their favourite holiday haunts were spotted with alcohol supermarket carry-outs 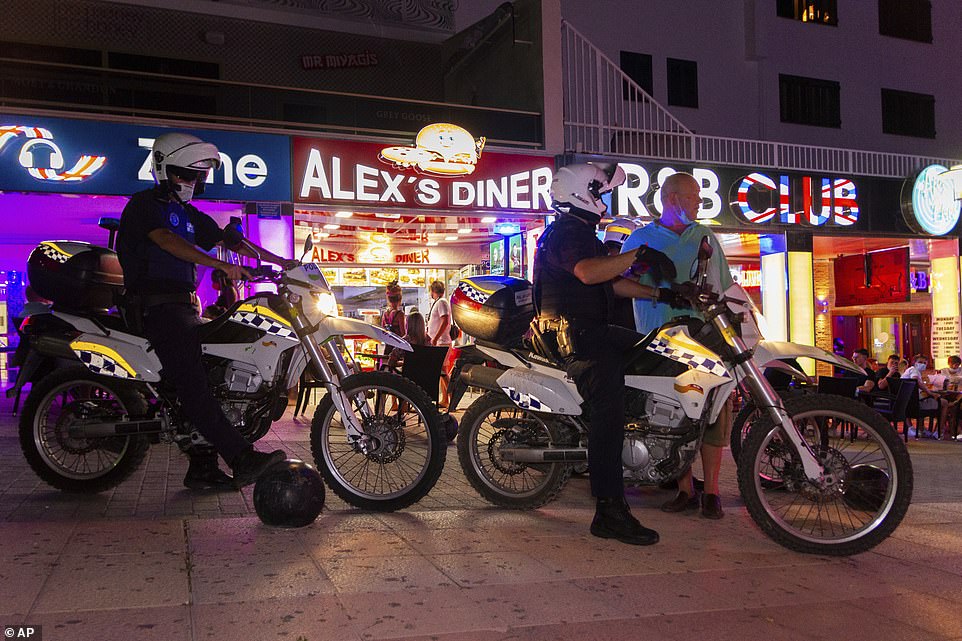 Balearic Islands Tourism Minister said as he announced the three street closures: ‘The businesses in those three streets have been closed.

‘I think it’s a sufficiently clear message to those practicing the type of tourism of excesses we don’t want here that they shouldn’t come because those types of establishments are not going to be able to open.

‘We will not hesitate a single second when it comes to doing everything we need to to guarantee the health security of our citizens and our economic reactivation. 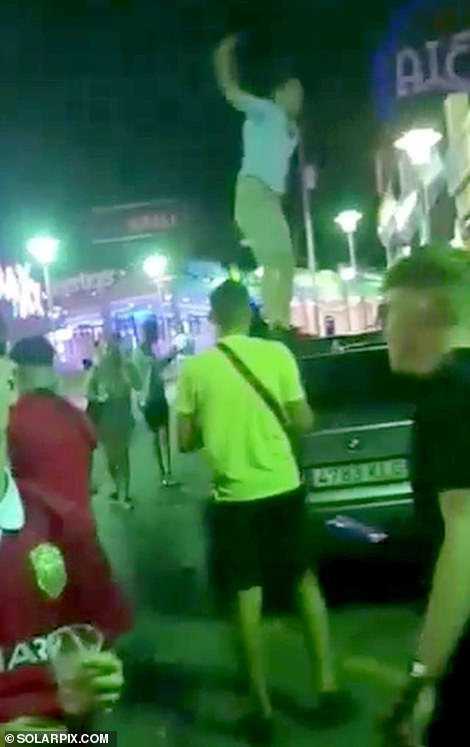 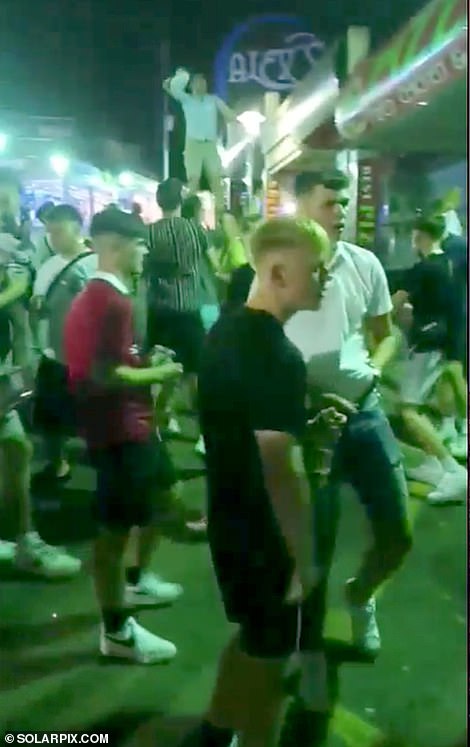 A spokesman for Calvia Council, which includes Magaluf and has spent years trying to improve the resort’s image and curb the worst Punta Ballena excesses, said of the party strip closure ordered by the higher regional government: ‘It’s a difficult and tough measure but one that is necessary because of the potential for putting public health and the economy at risk.’

Referring to footage such as the video of Brit youngsters jumping on a car outside a fast food takeaway in Punta Ballena Street in the early hours of last Friday morning, the council added: ‘There are images that have appeared over the past few days, linked to drunken tourism, that put public health and the economy at risk. 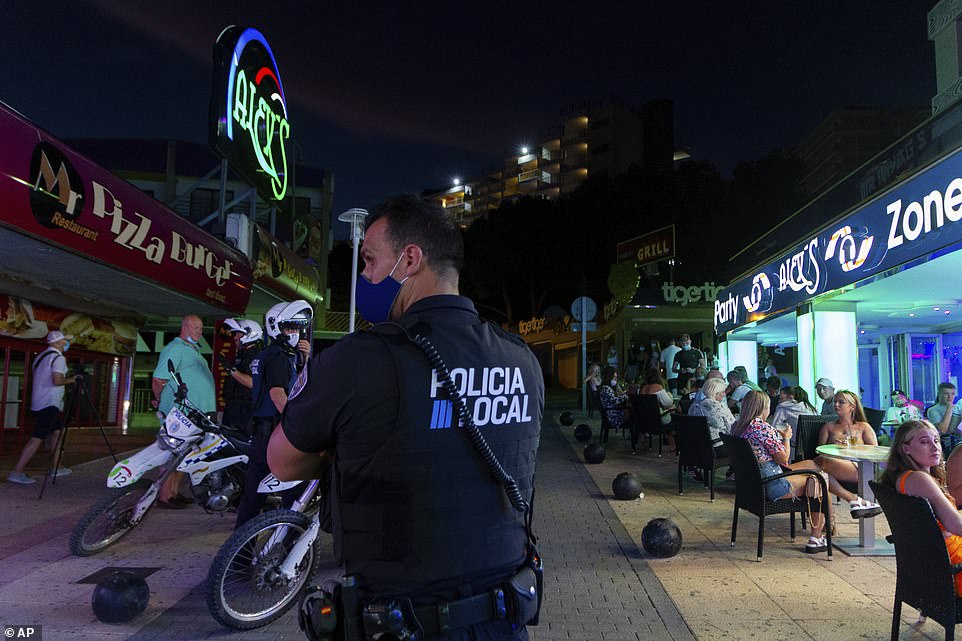 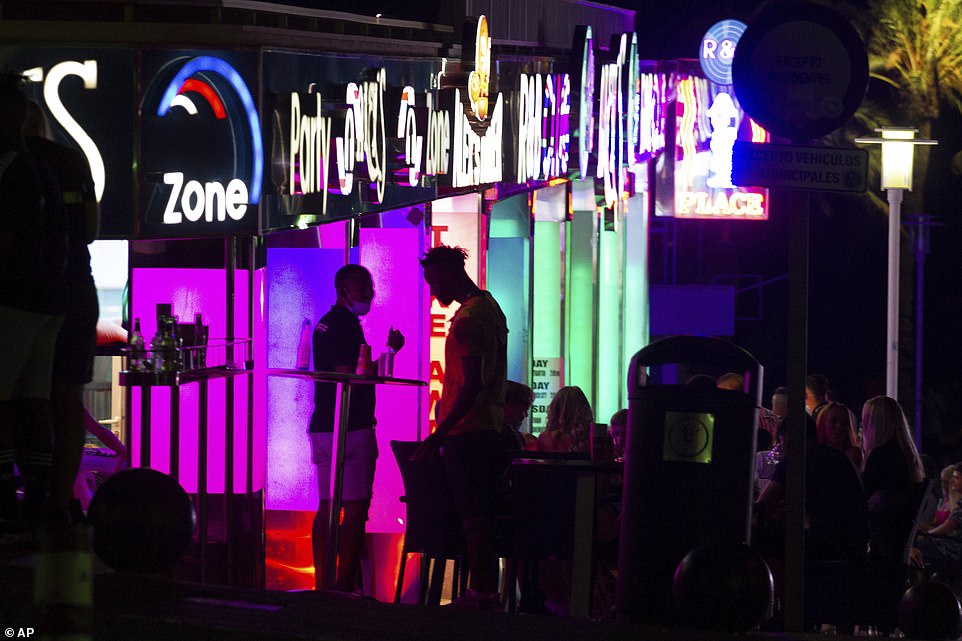 ‘We have spent many years fighting against this type of tourism and this year it has an added component which is protecting public health.

‘The decisions we take today will determine not only what happens this holiday season but next year as well.

‘In Calvia we want tourism of course but we don’t want the type of tourist that only comes here to commit excesses, only those holidaymakers who come here to enjoy themselves responsibly and who have a guarantee they will find security here as well.’

Balearic Islands President Francina Armengol said: ‘The health situation is positive and we will not tolerate an anti-social and irresponsible minority putting it at risk.

‘Our health and the economy are at stake.

‘We will act where necessary and we will be forceful against excesses.

‘Zero tolerance with those who threaten the safety of us all.’ 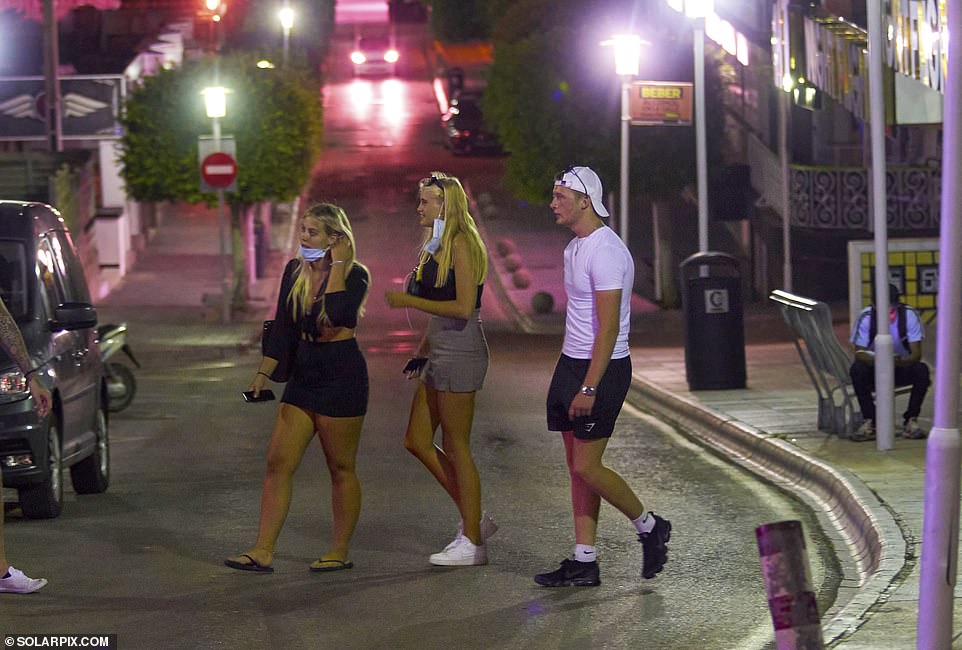 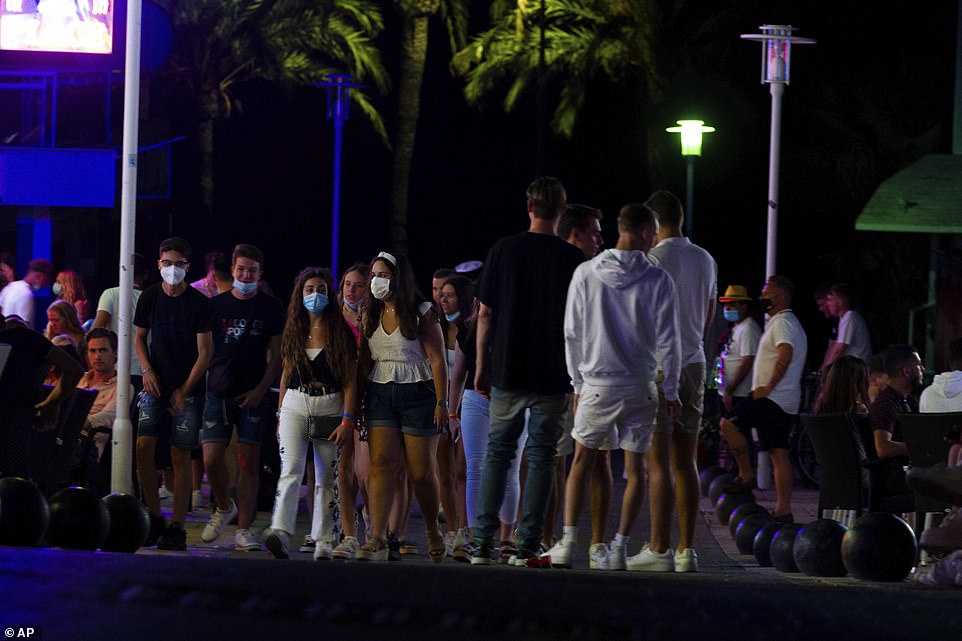 Two other party strips in Playa de Palma south-east of the Majorcan capital have also been shut down, known locally as Ham Street and Beer Street or calle del Jamon and calle de la Cerveza in Spanish. Pictured: Tourists in Magaluf on Thursday

Regional health minister Patricia Gomez said of the three street closures: ‘You have to look at the evidence. Where are the Covid-19 outbreaks? We see everywhere they are the result of people massing in groups in small spaces for some time without protective measures.’

She added in an interview with local media: ‘We can’t put a police officer on each tourist to avoid that happening and believe me, in areas like the streets we have closed, it’s very easy for 20 to 30 people to group together in a second, do something stupid and post it on social media.

‘We don’t want that image of the Balearic Islands abroad.

‘It’s important not to scare off those tourists who do respect the rules.’

It is not yet clear if any of the businessmen affected by the closures will appeal.

Nicky Smith, who manages Magaluf Rocks, said: ‘It’s sad and we feel it’s very unfair but we want to send the message to British holidaymakers who were due to come out to Magaluf not to cancel their holidays.

‘There’s a lot of places in Magaluf and Palmanova that are open. It’s only Punta Ballena that’s closing. It’s a well-known part of Magaluf obviously but it’s not the only place.’

Who is in Theresa May's cabinet and who's resigned?

Super Tuesday results: winners and losers across the country