The owner of an Indian restaurant who was left devastated after a COVID-19 case forced his eatery to close has called on the state government to start fining individuals who fail to use QR codes to check in when they dine out.

Curry Vault Indian Restaurant and Bar owner Kailash Sharma said he had been left with no choice but to start turning away customers who refused to check in at his CBD restaurant. 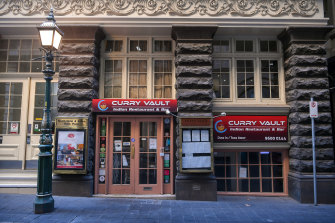 The Curry Vault restaurant in Melbourne’s CBD will remain closed for the next fortnight. Credit:Eddie Jim

The government on Thursday introduced new $1652 on-the-spot fines to be issued by authorised officers for businesses caught flouting coronavirus rules, including requirements to use electronic record-keeping after the man’s case exposed huge flaws with the check-in system.

Forty-two patrons and staff who attended the Curry Vault last Friday have been identified as primary close contacts of the positive case. Thirty-four of those have since returned negative test results.

Mr Sharma said more than half the people present had not used the QR code to check in, leaving contact tracers scrambling.

QR codes allow contact tracers to quickly and easily track anyone who went to an exposure site where a positive coronavirus has been identified.

The government said the new fine was designed to end a “worrying trend” of complacency.

Business caught repeatedly breaching the rules face further fines of $9913 and the prospect of being prosecuted.

Mr Sharma said while he supported moves by the government to fine those found to be deliberately breaching their obligations, it was unfair that the entire onus was placed on business owners.

“We are doing everything we can as business owners, but the government need to educate people to check in,” he said. “They shouldn’t just be fining businesses, but also individuals who refuse to use the QR codes.”

Curry Vault will be closed for the next fortnight and all staff have been ordered to isolate after being deemed close contacts of the Melbourne man.

“It’s been terrible,” Mr Sharma said. “The last few days have been just devastating for us … so much loss of business last year and now to be forced to close our doors again. We are just asking ourselves, why us?”

When he is allowed to open again, Mr Sharma will ask an employee to stand at the front register to ensure every single customer has checked in.

Victorian Chamber of Commerce and Industry chief executive Paul Guerra also criticised the new QR code move, saying the government failed to communicate properly with businesses owners so they understood what their obligations were.

“Let businesses do their jobs, they’re not enforcement officers. Businesses have suffered enough these past 14 months and should not have to bear the brunt of individuals doing the wrong thing.”

Adrian Esterman, Professor of Biostatistics at the University of South Australia, said the responsibility to protect the community from coronavirus should be shared among business owners and the public.

However, the former advisor to the World Health Organisation stopped short of calling for customers to be fined if they did not use QR codes to check in. 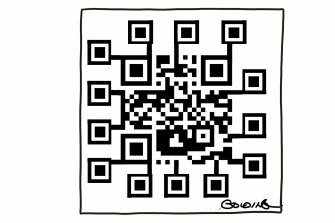 “It’s a really difficult one,” he said. “Sometimes people might forget their phones or they forget to check in and it’s not on purpose. A central part of protecting everyone from another wave of cases is relying on everyone to do the right thing.”

The crackdown on businesses comes after a three-week blitz of 4000 Victorian businesses in April found 37 per cent were not complying with QR check-in rules.

More than 165 enforcement notices were issued, including to some outlets that had failed to install QR code systems.

About 300 other businesses were given verbal warnings for not using QR codes, failing to have a COVID-safe plan and not displaying signs about density quotients or social distancing.

“It’s essential every Victorian checks in when visiting a business to help contact tracers quickly find those who could be at risk of coronavirus exposure,” said acting Police Minister Danny Pearson.

NSW made it compulsory for restricted businesses to use a government QR service in January, while the ACT made its app mandatory from March and Queensland mandated the use of its service from the start of this month.

Victoria’s government-backed app will be compulsory from the end of the month and businesses are currently using a variety of government and private systems.

“Eight months ago we were calling for a universal system,” she said. “They have had months to get this right.”

The new fines are on top of a $200 fine that can be issued for anyone caught not wearing a face mask on public transport, in ride-share vehicles, hospitals and airports.

Hefty fines of up to $4957 were also issued to people who attended unlawful gatherings at the height of the coronavirus pandemic last year and $1652 fines for anyone flouting most stay-at-home order breaches. 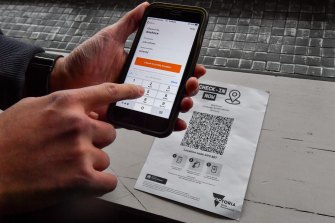 More than 19,000 penalty notices were issued for breaches of Chief Health Officer orders by October last year, but only 845 had been paid.

Britney Spears will not perform again while her father is in charge of her life and career, her lawyer told a Los Angeles Judge