The Los Angeles Police Department is investigating after homeowners were attacked in an apparent follow-home robbery by men wearing ‘police-type’ gear and badges.

As the trend of follow-home robberies continues in Los Angeles, police are investigating surveillance video showing alleged thieves clad in “police-type” gear attacking a group of victims outside a home before forcing them inside.

The video shows three people appearing to return home when two men claiming to be DEA agents approach them. Both men are seen wearing what appear to be police badges as well as black vests with “police” written on them.

One suspect was armed with a gun, while the other brandished a rubber mallet, police said. 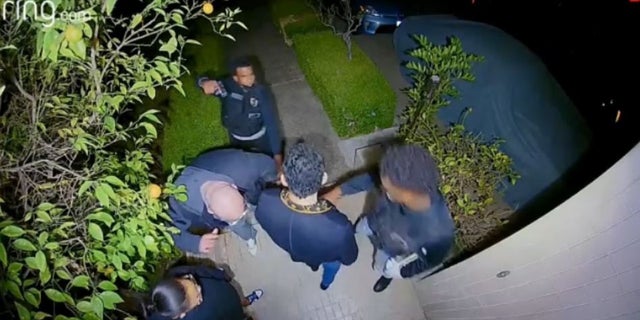 Suspects held victims at gunpoint and demanded to be let inside the home, video shows.
(RING)

The suspects hold the victims at gunpoint and demand they open the front door, according to the video. When the victim with the keys appears to struggle opening the door, the suspects throw punches and yell curse words.

The video ends as the victim attempts to open the door again.

Police said that once the door was opened, three more suspects came onto the scene, entered the home and stole the victims’ belongings. 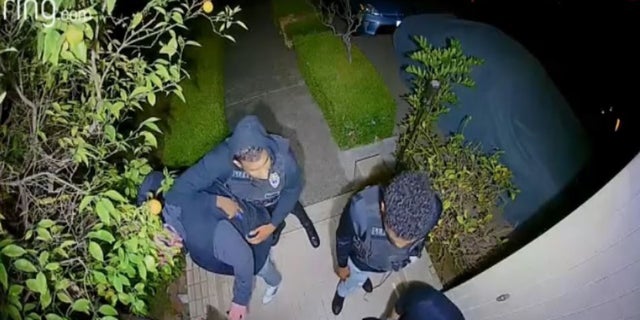 The incident is believed to have taken place in the city’s Fairfax neighborhood, FOX11 Los Angeles reported.

The incident comes as Los Angeles and other areas of California are being hit with a rash of thefts, including smash-and-grabs and follow-home robberies.

The LAPD announced in mid-November that it is investigating more than 110 robberies involving at least six different street gangs in which the victims were followed home. The LAPD had issued a warning regarding the “follow-home robberies” earlier in November after a series of incidents.

The department later developed a “Follow Home Task Force” in response to the ongoing crime trend after one such robbery ended in a homicide Nov. 23.