Home » World News » California is richer than ever. Why is it last in the nation for school bus access? 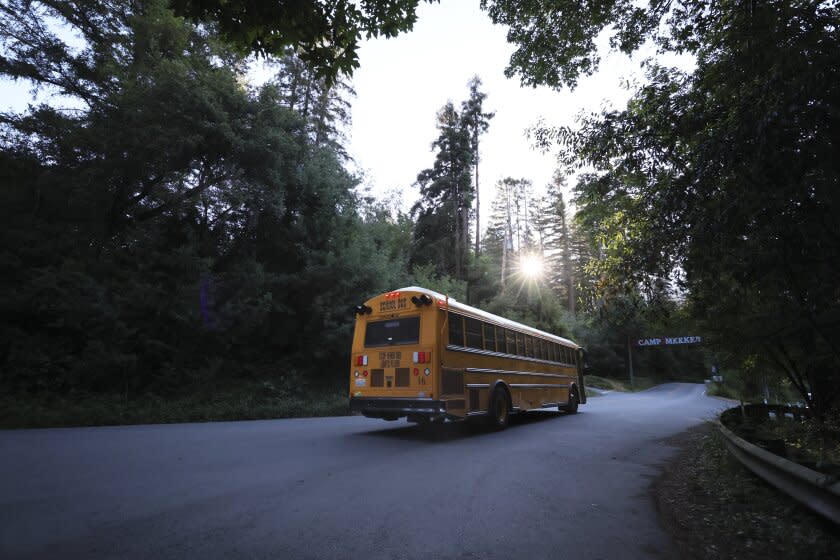 When the COVID-19 pandemic shut down rural Del Norte County schools, it was the buses that brought students a shred of normalcy.

Teachers and staff boarded the yellow buses and helped deliver brown bags of free meals and school supplies. They drove along winding, dilapidated back roads known for landslides, as concerns grew about students who had been shut out of classrooms.

“That school bus is a lifeline,” said Jeff Harris, superintendent of schools in Del Norte County, the northwestern corner of California. Del Norte, flush with redwood forests, is home to more than 4,000 K-12 students, a majority of whom qualify for free or reduced-price meals.

When district finances were tight in 2019, school officials considered making cuts to transportation services. But they ultimately backed off as community sentiment became clear: Buses are a necessity.

“If we do not provide transportation services, then our students’ ability to access education just becomes critically endangered,” Harris said. “There is no way that a rural school district is able to decrease chronic absenteeism and support families who are in financial stress without running transportation services.”

Unlike some other states, California does not require school districts to provide buses, even if a student lives far from campus. The state pays a fraction of transportation costs for schools — the same amount since 1981 — despite soaring inflation, increased demand, a sharp jump in gas prices and a projected record-high state budget surplus.

Some students with disabilities or those experiencing homelessness are guaranteed free transportation under federal law, but otherwise, it’s up to local districts to provide buses. 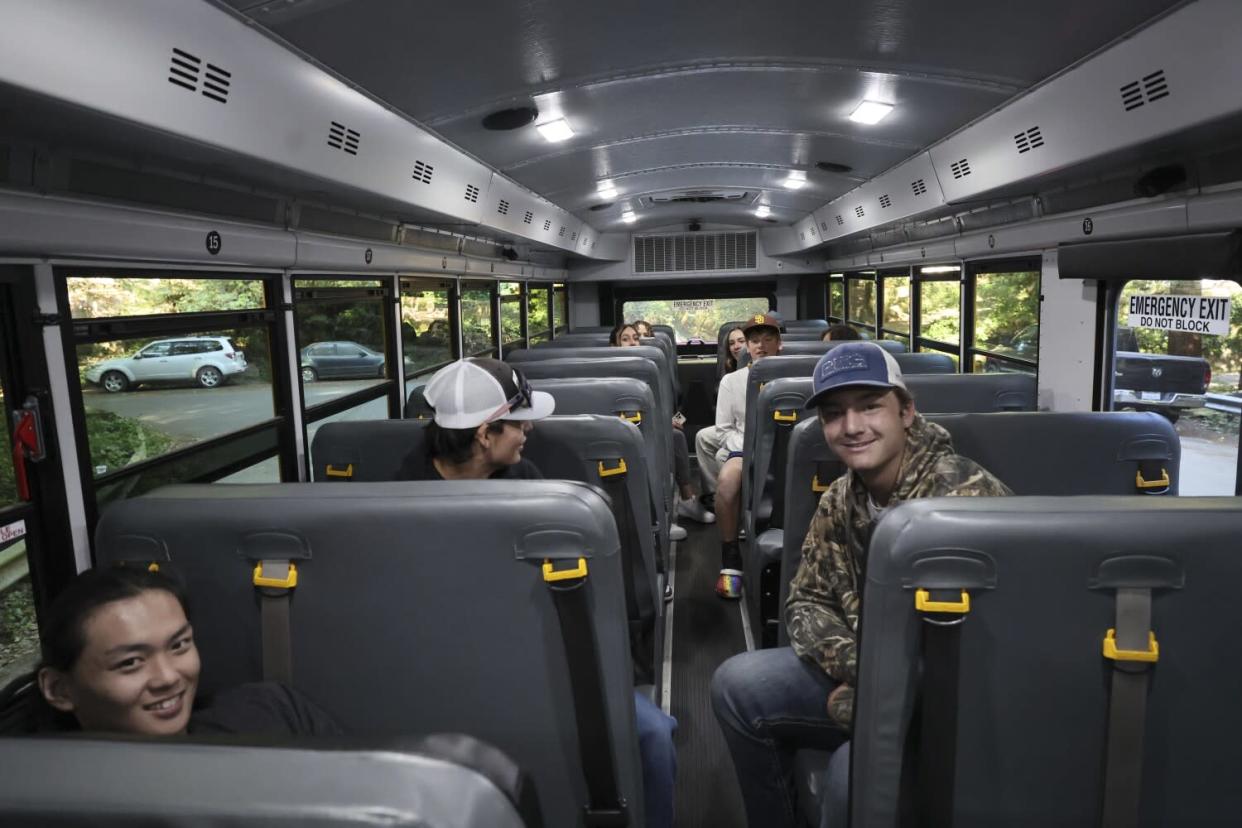 Since state officials froze school transportation funding levels more than 40 years ago, districts across California have cut back on bus routes or ended them; charged parents hundreds of dollars; or urged students to take public transit instead.

San Juan Unified School District in Sacramento County ended its bus program for most of its 49,000 students in 2011, citing post-recession financial woes. Rocklin Unified in Placer County offers transportation but at a cost of $350 per student each year, though exceptions can be made for low-income families.

California buses a smaller share of its public school students than any other state, fewer than 9% of students compared with 33% nationwide, according to the most recent National Household Travel Survey by the Federal Highway Administration in 2017.

More than two-thirds of California’s students got a private ride to school each day while 18% walked and 2% took a city bus or other public transit, according to the survey.

Those numbers fail to measure the strain placed on families as California’s vast wealth gap widens and concerns grow about students who do not have parents able to provide a daily ride.

Gov. Gavin Newsom and state legislators are set to finalize a budget that’s flush with cash, and school leaders are calling for the state to cover the cost of buses in full. It’s a move, they say, that will allow all students the option of a ride while ending inequities and boosting the use of what research shows is the safest and most reliable way for kids to get to class.

Other states, including Florida, Delaware and New York, provide more when it comes to school buses. Some states cover the full cost, while others base reimbursements on districts’ ability to pay or miles driven and ridership.

“When it comes to providing free school transportation to students, California comes in dead last. Numerous states have, for decades, offered free bus rides to and from school to all public school students. California is not one of them,” state Sen. Nancy Skinner (D-Berkeley) said in a statement.

Skinner is the author of a bill that would require districts to provide transportation to most students by 2027, with a boost from the state. She points to the pricey legislation’s upside: safety, attendance and environmental benefits, as buses can reduce traffic and the number of vehicles on the road.

The bill is among a few proposals moving through the Legislature aiming to address the decades-old problem.

A $1.2-billion legislative budget proposal urges Newsom to approve state-funded school bus rides for students up to sixth grade, as well as low-income students of all ages. The proposal would also ban school districts from charging families bus fees.

While state and local officials debate whose responsibility it is to fund school transportation, access to education is becoming further out of reach for some — especially in rural districts. 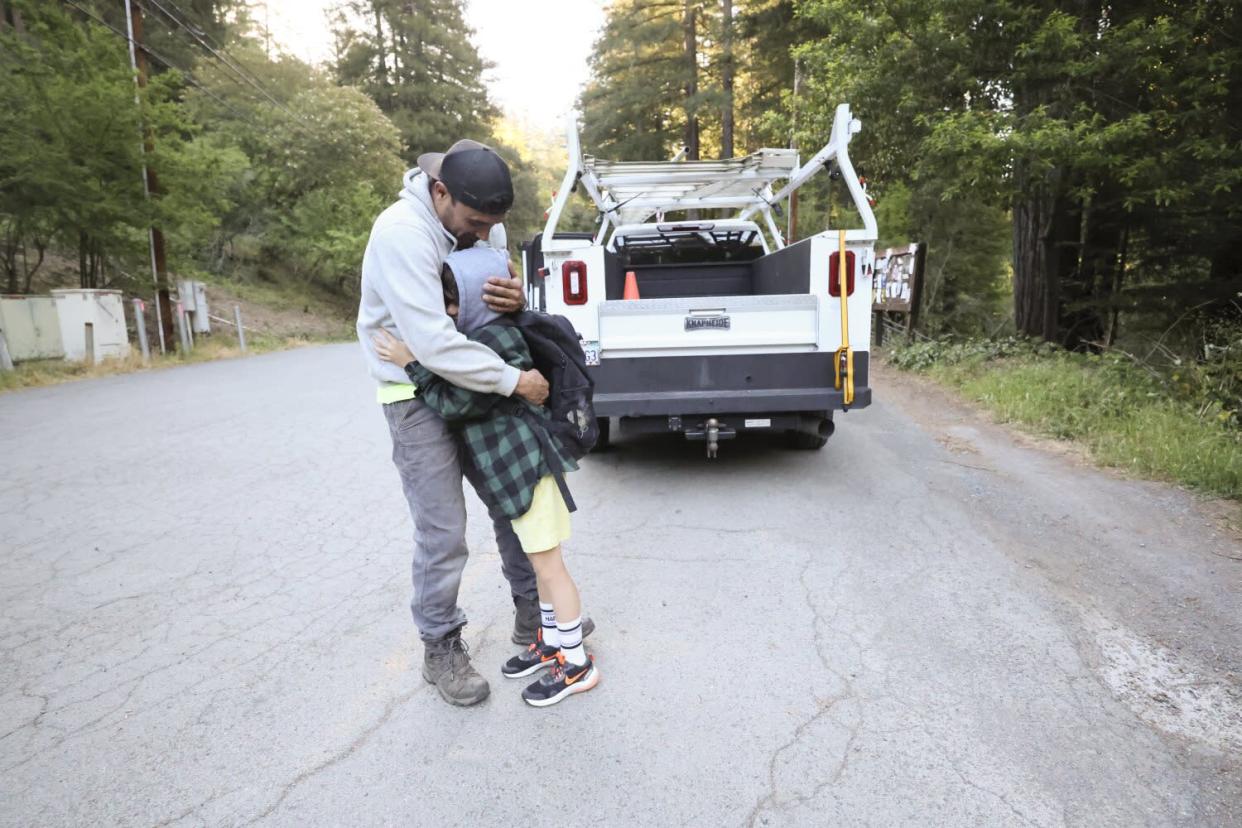 For years, Cheryl Witteman paid Sonoma County schools to pick up her children every day along “absolutely terrible” country roads at their home on two acres near the quiet city of Sebastopol, a place where vineyards outnumber neighbors.

But when classes resumed in August, there was no bus at the end of her long driveway. In a cost-saving measure, the Sonoma County Union High School District ended the Wittemans’ routes.

Witteman feels lucky that she can work from home with a flexible schedule and be at school when the bell rings, but she worries about families that can’t do the same. She spends about 80 minutes a day taking her child to and from school— an increasingly expensive trip as gas prices exceed $6.60 per gallon in Sonoma County.

“We are a middle-income family. We’re not wealthy. It’s a challenge. It really is a hardship for our family,” she said. “Buses are a leveler. If everyone rides the bus, there’s not this tiered system.”

The Sonoma district scrambled last year to help families left without bus access after the latest cutbacks, with school officials asking parents whether they could offer other students a ride.

Bassett Fernandes worries about families that cannot afford the $240 a year the district charges to ride the bus, and about those that can’t balance daily work commutes with the school day schedule. But she also says it is not financially feasible for the district to spend more on operating bus routes than it already does.

“This has got to be breaking the bank for some people. We suspect some kids haven’t been coming to school because their parents actually cannot afford to buy the gas to get them there,” Bassett Fernandes said. “There’s a human cost to this.”

Harris, the Del Norte County superintendent, can’t help but wonder how much more schools could do if only the state would cover busing costs. What the district spends on transportation now would be enough to hire 13 teachers each year, he said, or could be used to add more student support services.

Del Norte County reports among the highest “adverse childhood experiences” scores in the state, a measure of trauma and abuse linked to various negative academic and health outcomes. Bus routes serve the area’s isolated tribal lands, as 14% of the district’s students are Native American.

Harris is worried about the county’s high opioid overdose and violent crime rates and what school officials described in a recent grant proposal seeking more funding as “economic stress coupled with rural boredom.”

“We’re using our current funds just to get kids to school,” Harris said. “We see it as a real equity issue.”

California’s school funding formula was designed so that districts can make spending decisions on their own. As the state budget grows, so do school district budgets. But school officials say transportation should be a guarantee outside general funding — especially as the state bases funding on average daily attendance.

“Over time, school funding has ups and downs, but transportation is an enduring need that requires a stable funding source,” said Troy Flint, spokesperson for the California School Boards Assn., which is sponsoring a bill by Assemblymember Patrick O’Donnell (D-Long Beach) that would require the state to reimburse school bus costs in full. “Right now, it’s like robbing Peter to pay Paul.”

Twenty percent of low-income families do not own a vehicle, and the majority of children in those families take a bus to school, according to the federal Bureau of Transportation Statistics. Even vehicle ownership does not necessarily mean vehicle accessibility, a 2021 report from the bureau warned. 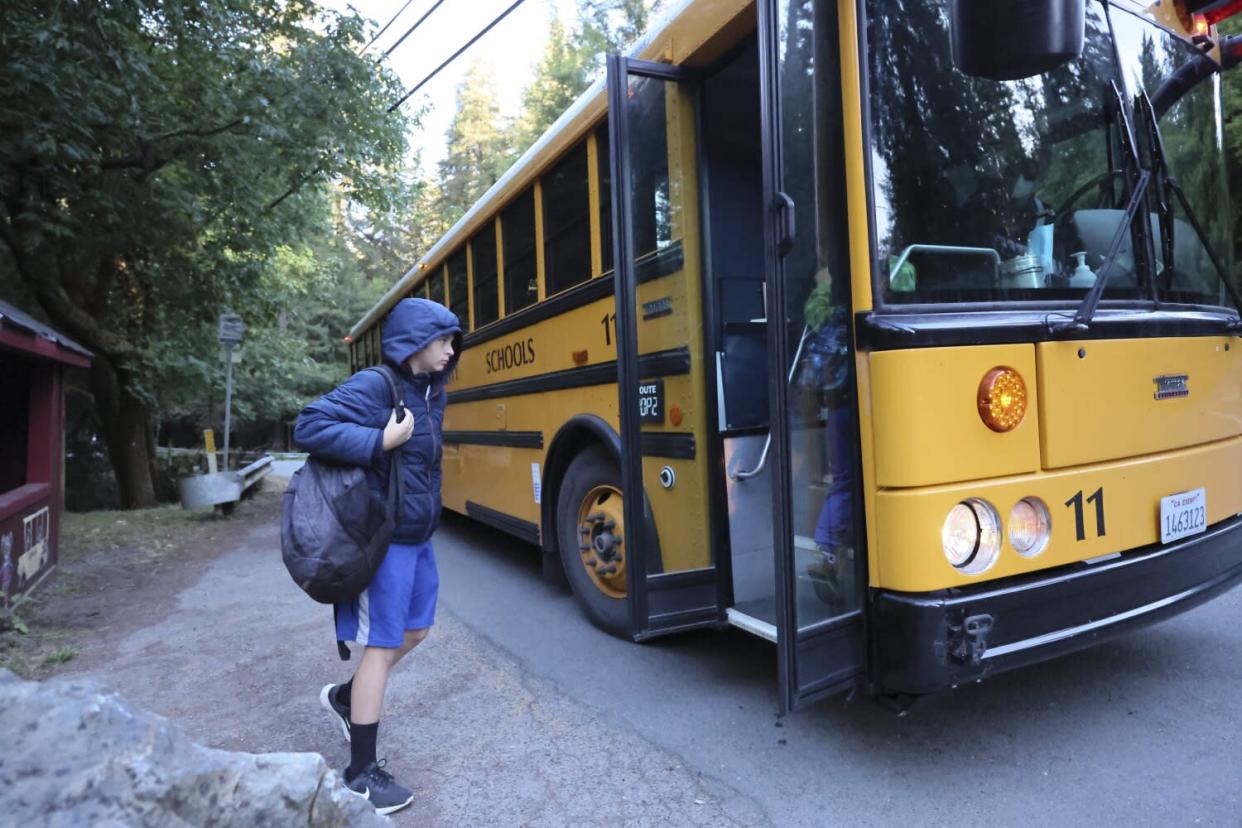 The state’s Black and Native American students are more than twice as likely to be chronically absent from school than their white peers. The state does not track why students are absent, but national organizations such as Attendance Works point to lack of transportation as one barrier.

Los Angeles Unified, the second-largest school district in the nation, does not provide buses for the general student body. The district launched a pilot program last year that provides free Metro bus and train rides to students.

Students who have a potentially dangerous walking route to school may receive a bus ride “on a limited basis,” according to LAUSD’s website. Just last month, the Los Angeles City Council proposed barring homeless encampments within 500 feet of schools after hearing concerns from parents.

“We want to remove all barriers for kids getting to school, rural or urban,” LAUSD board member Tanya Ortiz Franklin said. “There are a variety of issues and family circumstances that prohibit kids from getting to school on time. If we could provide transportation for all who request it, I think learning would skyrocket.”

While California’s school funding formula is complex, Dave Walrath, who worked on the issue at both the Legislative Analyst’s Office and the state Department of Finance, says it comes down to a simple question with an obvious answer: Should every child have a right to attend school?

“Yes, we’re at record levels of funding that we hope continues, but we also have a significant amount of need for just direct classroom instruction,” said Walrath, who is now an education lobbyist. “Every district has its own situation and fiscal pressures. Right now, there’s a disproportionately negative impact on those who have the highest need for transportation.”

Justin Villarreal leaned down to hug his 10-year-old son, Harbor, before the yellow bus came to pick him up at 7:38 a.m. as it always does at Camp Meeker, an unincorporated community in Sonoma County just minutes from the ocean. He and his wife, Sarah, coordinate driving their four children to a bus stop 15 minutes from their home each day, as routes are limited.

The Villarreal children, 7 to 15 years old, are able to ride for free with a waiver from the school district for low-income families. The oldest, Arraya, works at a local coffee shop so she can save for a car. Her parents plan to one day lean on her for help with rides for her siblings.

Justin Villareal, an energetic dad who wears his hat backward and runs a landscaping business, jokes that he and his wife are superhuman. Their routine is often comfortable chaos, as he loads the kids up in his white work truck for the next basketball practice or the morning bus stop.

“We have so much going on,” Villareal said, thinking about what day-to-day life would be without the school bus. “It’s super huge to our family — and necessary.”

Woman, 59, dies after being pulled from sea near Southsea harbour hovercraft slipway