Thousands of people in California were forced to flee their homes as severe weather continued to batter the state, leaving one person dead this week and a child missing, while tens of thousands of utility customers were still without power Tuesday morning.

Moderate to heavy rains were expected to continue to hammer much of California on Tuesday as a fresh low-pressure system barreled toward the state as part of a “parade of cyclones” that prompted a string of rescues Monday. Homes were flooded, streets transformed into rivers and cars were swamped amid the deluge.

One person was killed in Avila Beach, roughly 180 miles north of Los Angeles, when a vehicle was overtaken by water, said Anita Konopa, an official with the San Luis Obispo County Office of Emergency Services.

A child is also missing after being swept away when floodwaters swamped a vehicle in the northern section of the county, near Paso Robles, according to Scott Jalbert, another official with the agency. A search for the child was called off Monday afternoon due to extreme conditions, said Tony Coppola, a spokesman for the San Luis Obispo County Sheriff’s Office. It was not immediately clear Tuesday morning when the search would resume.

As of early Tuesday, more than 63,000 utility customers were without power across California, according to PowerOutage.us. At least 13,000 of those were in Sacramento County alone, according to the outage tracker. 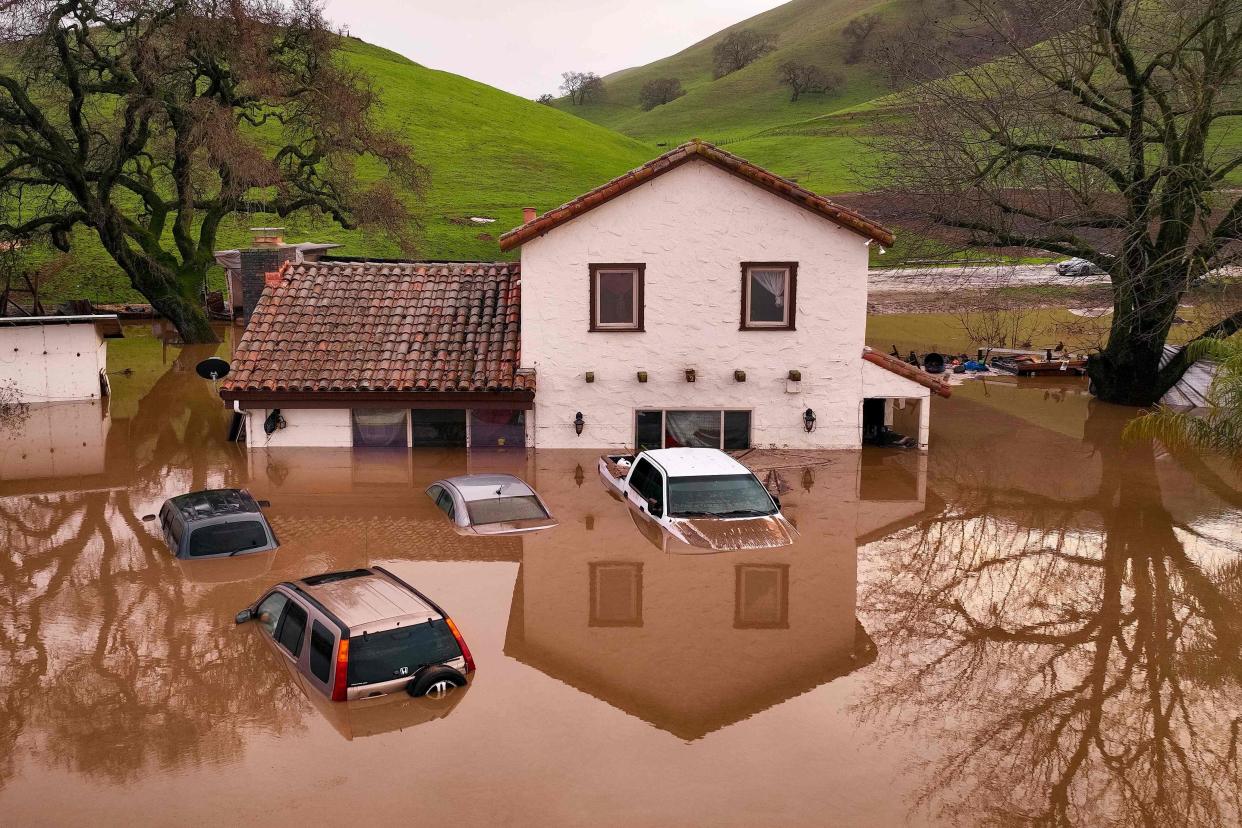 Just as one episode of heavy rains across the state began to wind down, another low-pressure system rapidly gained strength off the West Coast, barreling toward the state, according to the National Weather Service.

“The endless onslaught of potent systems with atmospheric rivers of moisture continue to inundate California,” it said.

Officials issued immediate evacuation orders Monday for the entire community of Montecito, which is home to a number of celebrities including Prince Harry and his wife, Meghan, as well as for parts of Santa Barbara and other nearby towns amid heightened flood and mudslide hazards. 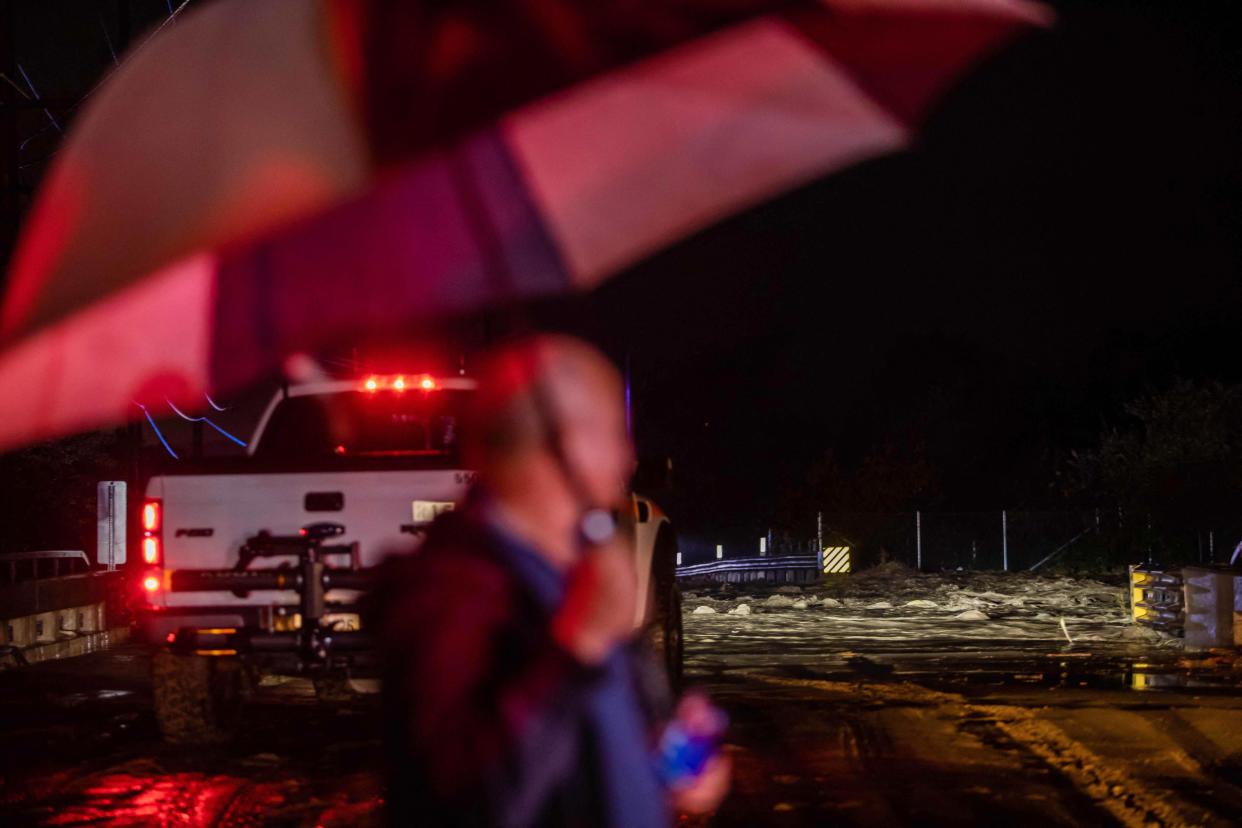 In Montecito, the order was issued “based on the continuing high rate of rainfall with no indication that that is going to change before nightfall,” Santa Barbara County Sheriff Bill Brown said Monday afternoon. Heavy rainfall in the area, which is home to 10,000 people, had already flooded roads and creeks, he said.

The severe weather also forced the Santa Barbara Airport to close due to flooding, the airport announced in a tweet Monday.

“All commercial flights are canceled until further notice, and the terminal is closed,” it said. The airport said its reopening would be “dependent on the weather and conditions.”

In Chatsworth, a suburban neighborhood in Los Angeles, four people were trapped after two cars were swallowed by a sinkhole that left an entire road “compromised” Monday night, the Los Angeles Fire Department said. Two people were able to get themselves out of the sinkhole, while firefighters were able to safely extricate the other two, who were treated and taken to a hospital with minor injuries, it said. 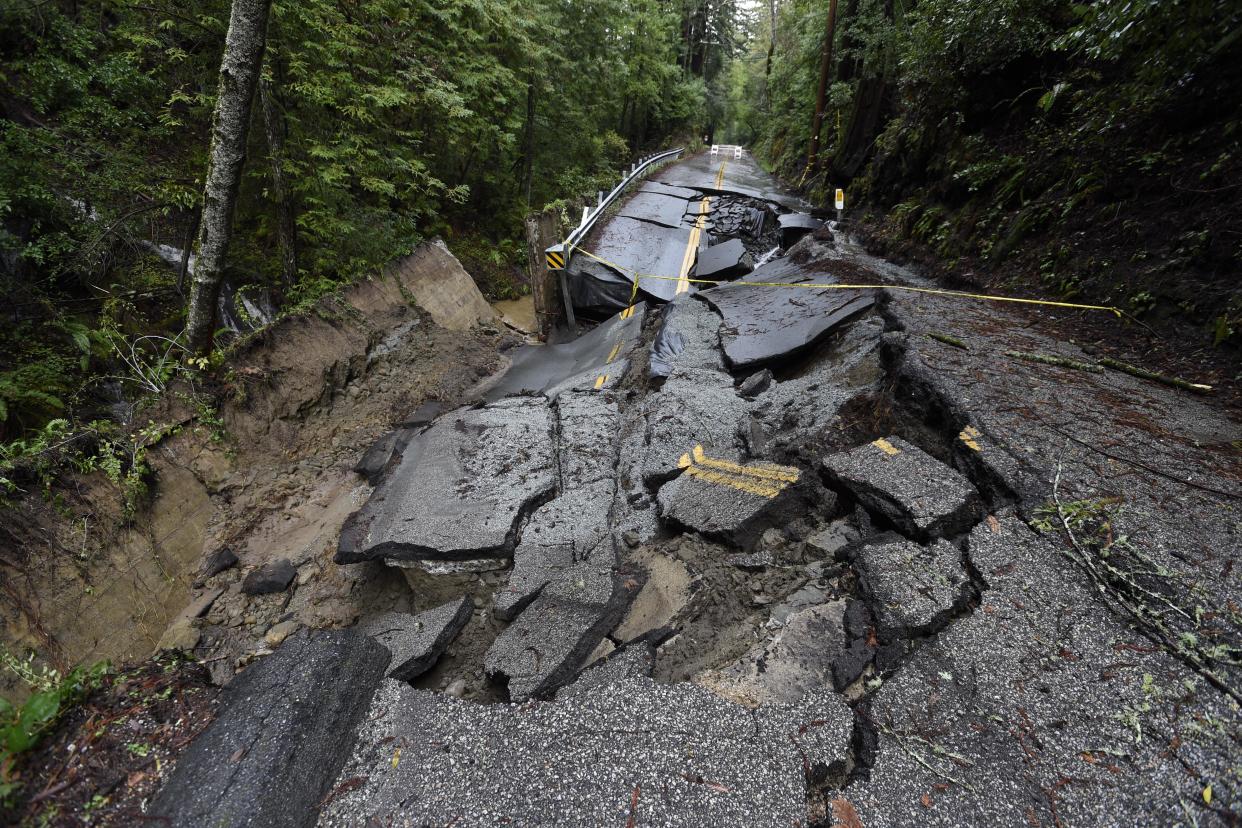 California has faced deadly severe weather for days, with at least six people having died since New Year’s weekend, including a toddler who was killed after a redwood tree fell, crushing a mobile home in the state’s north.

Two people killed in what appeared to be storm-related deaths in Sacramento County over the weekend were identified by the county’s coroner’s office Monday. Both Rebekah Rohde, 40, and Steven Sorensen, 61, were found inside tents at separate homeless encampments, with a tree branch having fallen on both tents, the coroner’s office said. The cause of death for both was still pending examination.

Nearly all of California has seen higher than average rainfall totals over the past several weeks, with totals 400%-600% above average values, according to the weather service.

Climate change has made extreme precipitation in California twice as likely, with extreme weather predicted to generate 200%-400% of surface runoff, rainwater that cannot be absorbed by soil, by the end of the century, according to research by the UCLA environment and sustainability department.

While Tuesday’s storm system was expected to push inland in the evening, bringing widespread mountain snows across the Great Basin, an “enormous cyclone forming well off the coast of the North American continent will bring yet another Atmospheric River toward the West Coast — this time impacting areas further north from northern California northward up the coast of the Pacific Northwest” on Wednesday, the weather service said.

“When all is said and done, precipitation totals over the next few days will be in the 3-7 inch range through the Transverse Range of southern California, northward along the central to northern California coast ranges and through the Sierra,” it said.

The weather service warned that widespread considerable flood impacts were likely across large swaths of California into western Nevada.