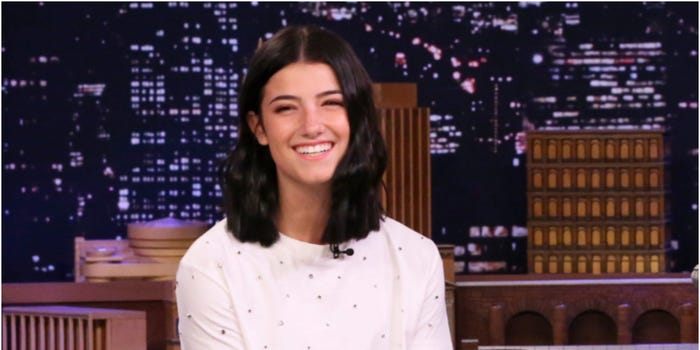 D'Amelio, 16, last week lost about a million followers due to controversy stemming from a YouTube video. She appears to have quickly rebounded to hit the milestone, celebrating 99 million followers on Saturday just one day before she reached 100 million.

In the video, which featured her parents, her older sister Dixie, and beauty guru James Charles (who is no stranger to scandals of his own) sitting around a dinner table, D'Amelio lamented that she had not yet reached 100 million followers by the anniversary of her having reached 1 million.

"Was the 95 not enough?" Charles retorted before D'Amelio clarified that she preferred "even numbers."

The internet's fury was further exacerbated by the behavior of her sister, who acted disgusted by the food, specifically snails, prepared by personal chef Aaron May.

As her 19-year-old sister threw up, the younger D'Amelio asked if they could instead be served "dino nuggets," prompting criticism that the teens were "entitled" and lacked proper etiquette. The video even prompted a feud with Trisha Paytas, the 32-year-old YouTube star known for spawning controversies of her own.

THANK YOU ALL SO SO SO SO MUCH FOR 99 MILLION I CANNOT WAIT TO SHARE WHAT I HAVE IN STORE FOR YOU ALL VERY SOON!! I LOVE YOU 💕 💕💕 dc @jaedengomezz

In a video response to her follower loss, Charli said the entire video and backlash that ensued was part of "one huge misunderstanding."

The D'Amelios have spent the last year dominating the quickly growing social-media platform, and their star power had extended beyond the platform that made them famous. In February, Charli appeared in a Superbowl commercial for Sabra, the popular hummus brand. In September, she launched a partnership with Dunkin' when the coffee and donut juggernaut began selling a cold brew beverage bearing her name.

As The Verge noted, Charli's ascent to 100 million users marks a major milestone for social-media stars at large, as it took 14 years for the first YouTube star to reach that following on the platform. On TikTok, it took her just about a year since she began posting to the platform in May 2019.

In addition to TikTok, Charli and her family have dipped into other social media, like YouTube, Instagram, and Twitter on their quest to turn their massive social-media fame into profit. Charli, who spent years as a competitive dancer before winning followers doing the renegade and other viral moves on TikTok, will release her first book titled "Essentially Charli: The Ultimate Guide to Keeping It Real" in December.

The teen's status as the biggest TikTok star is likely to go unchecked in the near future, as only two other creators, Addison Rae and Zach King, have passed 50 million followers, according to data from Social Tracker.

Gatwick Airport is planning to axe up to 600 jobs

Daughters, 15 and 17, to walk the length of England in memory of brave mum who died at 47 after motor neurone disease battle