China has put tariffs of up to 200 per cent on Australian wines, hammering Australia's Chinese exports and sending one of the country's largest wine exporters into a trading halt.

China's Ministry of Commerce on Friday issued a preliminary ruling on an investigation into Australian wine, after China's drink industry accused Australian producers of dumping wine into China at a discount rate, reducing the competitiveness of local producers.

The ministry announced it would apply a tariff rate of between 107 per cent and 212 per cent on Australian wines. 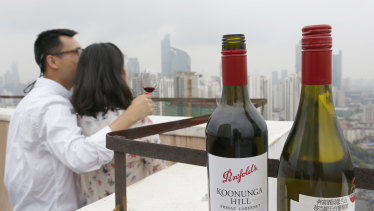 Australian wine is just one product that has become hostage to Beijing’s trade tactics and “grievances”.Credit:

The Ministry said it had conducted investigations in strict accordance with relevant Chinese laws and regulations and World Trade Organisation rules. The Australian government and the local wine industry have strongly denied the allegations. Trade Minister Simon Birmingham will address the ruling on Friday afternoon.

The trade strike is the latest in a long line of hits on Australian exports by Beijing this year. Diplomatic disputes over Australia's calls for an independent inquiry into the coronavirus and China's actions in the South China Sea and Hong Kong culminated last week when the Chinese embassy issuing a list of 14 grievances with Australia's policy positions.

Australian Grape and Wine chief executive Tony Battaglene said that wine produced by companies that registered for China’s anti-dumping investigation would receive a tariff of between 107 per cent 167 per cent.

Australia’s biggest wine company Treasury Wine Estates, a major exporter to China, was among the companies who participated in the investigation.

Treasury went into a trading halt on Friday as news emerged about the tariffs, as its shares slid down 2.4 per cent to $10.15.

“We don’t see it’s justified and we’re obviously deeply concerned about what it does,” Mr Battaglene said of the tariff move.

“It’s all rather academic up around those levels anyway. Because once you’re up at 160, 200 per cent, essentially it’s going to be very difficult to sell product that consumers are prepared to pay for,” Mr Battaglene said.

Australia has the biggest market share in China of all wine-exporting nations. Australia also has many wine producers who export wine only to China.

“I think it will have a serious impact,” Mr Battaglene said.

“I mean, it’s very difficult to see that you can be hit with a tariff that size and still maintain the market size that we have. Obviously, we’ve got some high valued product there, and if the consumer is willing to pay for that then that’s good, but it will have a margin impact.”

Treasury Wine subsequently issued a second statement to the ASX requesting a trading halt in its shares which could last until next Tuesday, so that it could digest the tariff announcement.

“TWE is reviewing the details of the provisional measures as a matter of urgency in order to update the market,” Treasury said.

The $7.5 billion wine giant does not disclose the value of its China sales, but it is believed that Treasury generates hundreds of millions of dollars in revenue in the China market.