London: Former British prime minister David Cameron says conservative MPs around the world – including in Australia – must do more to lower emissions, arguing climate change policy is a "natural" issue for the right of politics to take ownership of.

Cameron has also defended his role in authorising the 2016 Brexit referendum that plunged Britain into turmoil, forced his resignation from Downing Street and triggered Britain's imminent formal departure from the European Union on January 31. 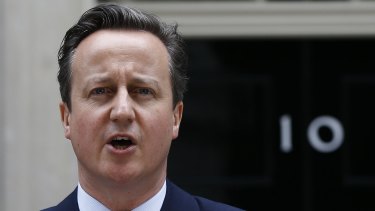 David Cameron was prime minister for six years and Conservative Party leader for more than a decade. Credit:AP

The former Conservative Party leader, whose stint as prime minister between 2010 and 2016 included a series of major policy reforms on climate change, warned in an interview with the ABC's 7.30 program that a slew of recent natural disasters represented "definite elements of emergency".

Asked by host Leigh Sales whether Australia was doing enough to lower emissions, Cameron replied: "I think everyone has to look at what they’re doing, look at their promises and ask themselves, 'Can we do more?'

"And to conservative parties, I would definitely appeal and say, 'Look, don’t leave the issues of climate and the future of the planet and what we leave to our children … to the left or you’ll get an anti-business, anti-enterprise, anti-technology response."

"We need business technology to be at the heart of what we do. And I think conservatives can lead on this.

"It is difficult but I think what I would urge other leaders to do is … keep going back and looking at what more can we do. The evidence is you can take these steps, take people with you and get re-elected, as I was in 2015, at the same time."

Britain has passed a law to transition its economy to carbon-neural status by 2050. Prime Minister Boris Johnson has established a new committee of cabinet to focus on climate change and is expected to outline new details later this year about how Britain will lower its emissions to the extent needed to meet the 2050 goal.

Prime Minister Scott Morrison on Wednesday sought to recast the government's efforts to deal with climate change as protection of the budget bottom line.

He has flagged new adaptation policies to deal with the effects of more erratic weather conditions but is resisting calls to strengthen Australia's commitment to lower emissions by 26 to 28 per cent on 2005 levels by 2030 following the deadly summer bushfire catastrophe.

"I’m not a scientist and I always thought as prime minister my job was to listen to the scientists and hear what they have to say and it seemed when it came to climate change they were making two very powerful points," Cameron said.

"One is they seemed almost unanimous that these extreme weather events were connected to climate change. I’m not an expert on what’s happening in Australia but the temperatures seem to be higher, the rainfall seems to be lower.

"But the second thing the scientists were saying was that even if you’re in doubt about some of the elements, shouldn’t you attach a probability to all of these things happening?

"In which case shouldn’t you insure against it by cutting your carbon emissions, trying to make your economies more resilient [and] getting international agreements on climate change?"

Cameron – a supporter of remaining in the European Union – conceded "mistakes" were made during the 2016 Brexit referendum but said a national poll was inevitable.

"If I had said,' no, not on my watch, not going to do it', I think a future leader would have had to have held that referendum," he said.